There is a decade’s old conspiracy theory which has been trumpeted extensively by White Nationalist groups’ members (racists) which keeps being resurrected no matter how many times it has been debunked. This conspiracy theory involves the South African government confiscation of farm land by the killing off of White farmers. And yes, it looks like the republican President Donald Trump has jumped on the band wagon of this conspiracy theory.

On August 24, 2018, Salvador Rizzo of the Washington Post fact checks another “older conspiracy story” being perpetuated by President Trump via a tweet, based on something he may have gleaned from a FOX News’ report via his column, “President Trump’s false claim about murders on South African farms”

“I have asked Secretary of State @SecPompeo to closely study the South Africa land and farm seizures and expropriations and the large scale killing of farmers. ‘South African Government is now seizing land from white farmers.’ @TuckerCarlson @FoxNews”

“It’s not the first time a segment on Fox News gets the president tweeting. But it’s the first time Trump claims South African farmers are being mass-murdered.”

“This myth was fueled by white supremacists for years before it surfaced in a presidential tweet.”

“More than two decades after the end of apartheid, South African farmland owners remain a predominantly white group. Fringe groups in South Africa and the United States say these white farmers are targeted and killed at disproportionately high rates. There’s no evidence for this claim, experts say, but it feeds the white-supremacist agenda by stoking racial resentment and division.”

“Trump made two claims about South Africa in his tweet: that the government is seizing land from white farmers and that a “large scale killing of farmers” is underway.”

“The president’s first claim about land seizures has some merit but is mostly false. Trump’s second claim, that South African farmers are being killed on a “large scale,” is a fiction not supported by data.”

“We have no clue how this myth about farmers being killed ended up on the president’s Twitter feed. It didn’t come up on “Tucker Carlson Tonight,” the Fox News show Trump referenced in his tweet. But it has been swishing in the alt-right and white-nationalist ether for years. The Fox News segment may have jogged Trump’s memory about something he came across previously.” 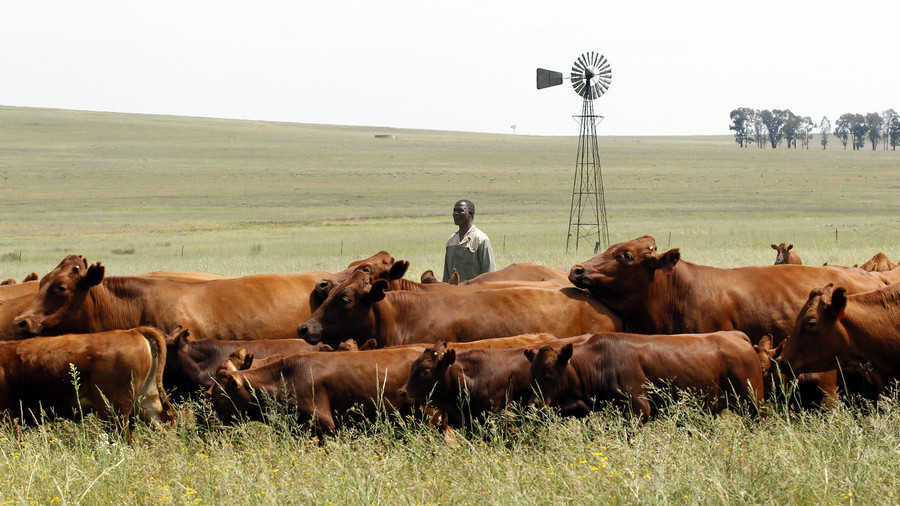 “When South Africa ended apartheid rule in 1994, approximately 15 percent of the country’s agricultural land was owned by the government or by “previously disadvantaged individuals,” a term used for people of African, colored or Indian descent. The remaining 85 percent “was owned by white commercial farmers,” according to Agri SA, an industry group.”

“Fast-forward two decades. In 2016, the government and previously disadvantaged individuals owned 26.7 percent of South Africa’s agricultural land — still the smaller share, although it was up from 15 percent in 1994, according to Agri SA.”

“A land audit released in November 2017 by the South African government found that, of the farms and agricultural holdings owned by individuals (as opposed to companies or trusts), whites owned 72 percent, followed by colored (mixed-race) people at 15 percent, Indians at 5 percent, Africans at 4 percent, others at 3 percent and co-owners at 1 percent.”

“Among the greatest obstacles to growth is the severe inequality between black and white South Africans,” Ramaphosa wrote in the Financial Times. “For the South African economy to reach its full potential, it is therefore necessary to significantly narrow gaps in income, skills, assets and opportunities. One of the areas where this disparity is most devastating is in the ownership and access to land. As the World Bank has observed, ‘South Africa’s historical, highly skewed distribution of land and productive assets is a source of inequality and social fragility.’”

“The “land question,” as Ramaphosa put it, goes back more than a century. Colonists in 1913 approved a law that restricted the African population to slightly more than 10 percent of South Africa’s land, while the white minority was entitled to the rest.”

“Patrick Gaspard, a former U.S. ambassador to South Africa under President Barack Obama, said “this is the most complicated and the most charged issue in South African politics and in the South African economy.” The country “has 9 percent of its population controlling a little bit more than 70 percent of farmland in the country,” he said. “That 9 percent is overwhelmingly white.” “Carlson and his guest on Fox News, researcher Marian L. Tupy of the libertarian Cato Institute, criticized Ramaphosa’s plan during the segment that piqued Trump’s interest. They warned it could lead South Africa down the same destabilizing path that Zimbabwe took in 2000, when it began to seize farmland owned by whites without compensation.”

But there was no talk whatsoever on Fox News about any farmers being killed.

“The president of South Africa, Cyril Ramaphosa, has begun, and you may have seen this in the press, seizing land from his own citizens without compensation, because they are the wrong skin color,” Carlson said, adding later that Ramaphosa “has changed the country’s constitution to make it possible to steal land from people.”

The South African government is considering a constitutional amendment to expropriate farmland, but that plan has not been finalized, so it’s premature to say that Ramaphosa has “changed the country’s constitution.” The government is also weighing whether it can redistribute farmland under current laws.

Carlson complained that Ramaphosa was “seizing land from his own citizens without compensation.” But Ramaphosa outlined a plan for farmland seizures “in the public interest subject to just and equitable compensation,” according to his op-ed in the Financial Times.

The South African parliament, he added, may decide that farmland seizures without compensation are justified in some cases. As possible examples, Ramaphosa mentioned “unused land, derelict buildings, purely speculative land holdings, or circumstances where occupiers have strong historical rights and title holders do not occupy or use their land.”