Before his last breath was taken on the 25th of August 2018, the republican Senator John McCain of Arizona had been that lone voice from the old Republican Party before it became the party of President Donald Trump, which stood up for truth, decency, what is right, and all that is truly great about the USA. He was its conscience, standing up for the “rule of law,” facing the reality that Russia is a foe that did attack our democratic institutions at a most basic level in 2016. He’d be the first to declare that any thinking counter to this truth was just poppycock.

During his last days in the US Congress before he left to be medically treated for an aggressive form of brain cancer, he had been observed pushing and advocating for the concept of regular order, working with lawmakers across the aisle to get important work done on behalf of the American peoples. It was this belief that was the impetus for being that one vote which curtailed the republicans’ plans to kill Obamacare in 2017.

He was that voice who was not fearful to stand up to the republican President Donald Trump when he did wrong which was in stark contrast to how many of his colleagues who have failed to act accordingly. 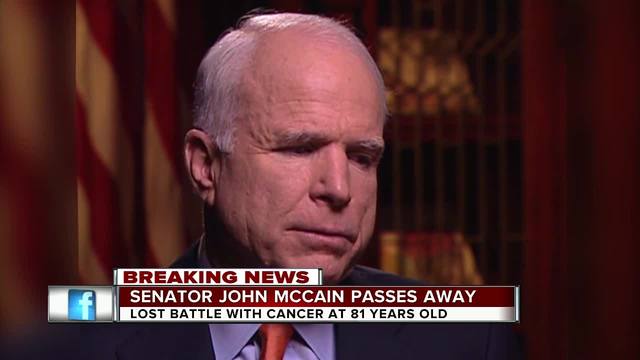 As an example and as per the 7/16/18 AZCentral report, Yvonne Wingett Sanchez, “Sen. John McCain blasted President Donald Trump’s joint news conference with Russian President Vladimir Putin on Monday as “one of the most disgraceful performances by an American president in memory.”

“McCain’s issued statement was among a number of Republican lawmakers who were condemning Trump’s appearance in Helsinki, Finland. There, Trump seemed to accept Putin’s denials of meddling in the 2016 U.S. election, overlooking mountains of evidence gathered by U.S. intelligence officials in favor of Russia.”

“McCain, chairman of the Senate Armed Services Committee and a frequent Trump critic, said in a statement that “no prior president has ever abased himself more abjectly before a tyrant.”

Many of us who have been witnesses to the GOP members in the US Congress failing to stand up to their standard bearer’s worst impulses, knew that we could count on Senator McCain to be that one leader to stand in the breach. He was someone who would was ruled by his conscience while his fellow Republicans have remained mostly silent.

One if my favorite conservative columnist Max Boot writes about this hole left by Senator McCain. On August 25, 2018, Max Boot for the Washington Post penned the following op-ed piece, “John McCain leaves the stage when we need him most”

“Abraham Lincoln said, “Character is like a tree and reputation like its shadow. The shadow is what we think of it; the tree is the real thing.” Sen. John McCain (R-Ariz.) was the real thing, and that is why his reputation will cast such a long shadow over our politics for years to come.”

“McCain was the rare celebrity who was even more impressive in person than on television. I first met him after the publication of my 2002 book, “The Savage Wars of Peace: Small Wars and the Rise of American Power.” An avid student of history, McCain read the book and liked it, especially because, unbeknownst to me, it featured one of his ancestors — an army officer who had fought the Mexican revolutionary Pancho Villa in 1916. His love of literature was not for show. I remember on a flight to the Munich Security Conference wandering to the front of the Air Force executive jet to find McCain engrossed in a lengthy historical tome. Imagine that — a politician who spent his spare time reading history. Or anything at all.”

“McCain’s studiousness may not have been part of his public persona, but irreverence certainly was. He was blessed with a caustic wit, a sense of irony and a healthy dose of self-awareness. As a result, he was free of the politician’s usual sin of boring interlocutors with stump speech outtakes. A good deal of his political appeal lay in his ability to avoid sounding like a politician — perhaps the only thing he and President Trump have in common. Unlike Trump, however, McCain did not establish his authenticity with ignorant or deranged statements. McCain could be politically incorrect (I remember how hard he laughed watching “Borat” on one flight) but he was never cruel or bigoted. He was, like Ronald Reagan, an idealist who believed in inspiring, rather than dividing, voters.”

“Working on McCain’s 2008 campaign as a foreign policy adviser was the easiest job I ever had, because McCain knew as much about foreign policy as anyone in Washington. He traveled incessantly to tend to America’s alliances. He was unshakeable in his conviction that America’s mission was to champion democracy and oppose despotism. Every U.S. president since the rise of Vladimir Putin in 1999 has engaged in naive reverie about working with the Russian strongman. McCain never had any such illusions. As he later said, “I looked in Mr. Putin’s eyes and I saw three letters—a K, a G and B.”

“McCain wasn’t always right, of course. Who is? He was pilloried for being an avid supporter of the Iraq War — a stance that he came to regret. But he should be remembered not just for his misguided advocacy of the invasion but for his brave and lonely support of the Iraq surge in 2007 at a time when he was preparing to seek the presidency and other supporters of the war, such as Hillary Clinton, had turned dovish. McCain was vindicated when the surge led to a 90 percent reduction in violence. If only President Barack Obama had listened when McCain warned against pulling U.S. troops out of Iraq in 2011 — a mistake that led to the rise of the Islamic State.”

“More than most politicians, of course, McCain was not simply a collection of policy positions — much less of poll-tested positions. Although a true conservative, he could transgress Republican orthodoxy on issues ranging from his support for campaign-finance limitations and immigration reform to his vote last year against repealing Obamacare.”

“McCain will be remembered, above all, for his character and courage. While other privileged young men were discovering ailments such as “bone spurs” to avoid the Vietnam War, McCain requested a combat assignment and spent more than five hellish years in the “Hanoi Hilton” POW camp. As the son of an admiral, McCain could have won early release, but he refused his captors’ offer because he honored the POW code: first in, first out. Years later, he displayed characteristic largess of spirit by advocating reconciliation with his torturers.”

“McCain’s support for normalizing relations with Hanoi was just one example of the character that he displayed not just as a prisoner of war but also as a politician. In 2008, he corrected a woman at a rally who told him, “I can’t trust Obama. I have read about him and . . . he’s an Arab.” “No ma’am,” McCain replied. “He’s a decent family man, a citizen that I just happen to have disagreements with on fundamental issues, and that’s what this campaign is all about.” How easy would it have been for McCain to traffic in conspiracy theories and demagoguery. But he refused — and his refusal, along with his own missteps (notably the selection of Sarah Palin as his running mate) may have cost him the presidency.”

“McCain’s dedication to America’s global leadership, advocacy for human rights, steadfast opposition to despots, devotion to bipartisanship, willingness to break with his own party, insistence on putting the nation’s interest above self-interest, and, above all, his unwavering sense of right and wrong — all are desperately needed at a time when his party has embraced an amoral, narcissistic demagogue who fawns over tyrants and flirts with isolationism and protectionism and white nationalism. Trump hated McCain and insulted him at every turn because McCain was everything Trump is not — and everything that we need in our politics today but tragically lack.”