The republican President Donald Trump did his very best to create a story that would deflect from all the media press his nemesis, the recently deceased Senator John McCain (R-AZ) has been receiving. Thus on the 27th of August 2018, President Trump set up a press conference where he announced a new trade deal with Mexico which is simply a NAFTA upgrade. He kept trying to finagle Canada out of the picture but the current Mexican President Enrique Peña Nieto was not having it.

My thinking is that the proof is in the pudding. When it comes to President Trump, it pays to have all the details before taking his word for anything. 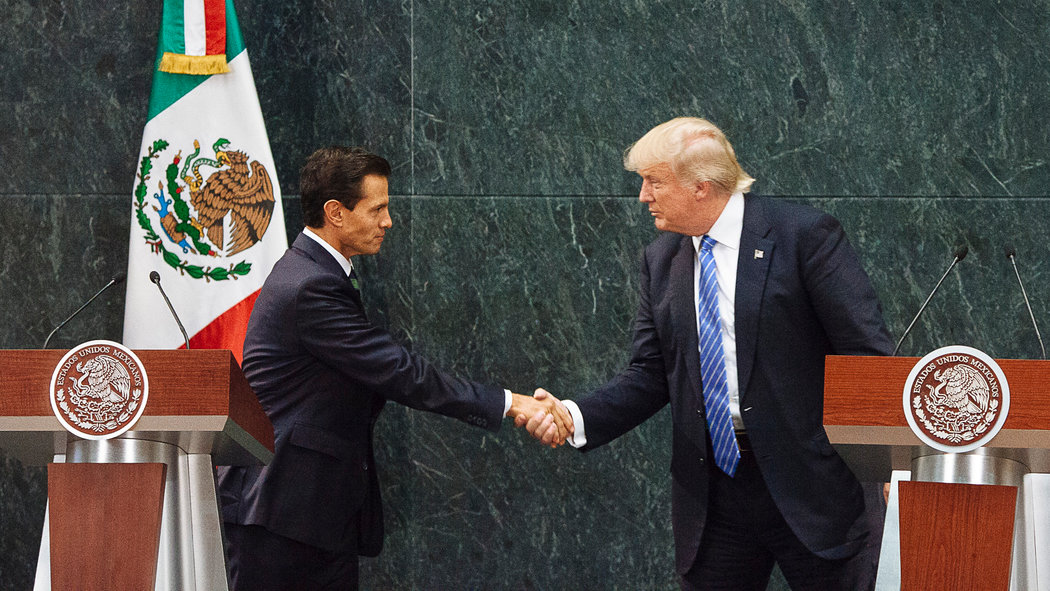 As per an August 24, 2018 Forbes report by Phil Levy, “The Trump administration is under pressure to show results with its trade policy. To date, that policy has largely consisted of attacking trade partners while issuing nebulous demands for “better” trade deals. So far, the administration has been unable to deliver a single such improved outcome.”

“You can tell the pressure has been mounting by the increased Republican calls for the President to “get a win” on trade. Or by trips such as that of Commerce Secretary Wilbur Ross to North Dakota or Agriculture Secretary Sonny Perdue to New York to reassure anxious farmers who are suffering from tariff retaliation. Concerned that discontent with the damage to the farm sector could hurt Republicans in the midterms.”

“Yet a year and a half into this presidency, with increasing levels of protection and retaliation afflicting the American economy, the promises of impending success seem ever less plausible. This is particularly true when there are no negotiations taking place.”

“Thus, to maintain support for the President’s approach, it was important to give the illusion of progress. This week that was done through two sets of negotiations, one with the Chinese and one with the Mexicans. Neither succeeded, but success was never likely and was never really the point.”

“In a slightly surreal and awkward press conference held in the Oval Office Monday (8/27/18), Donald Trump announced that the United States and Mexico had reached a preliminary deal to revise pieces of the North American Free Trade Agreement, then suggested that Canada might not be included in the final pact.”

“Trump did not share details of the agreement with Mexico, but the largest changes  reportedly focus on the auto industry and are theoretically designed to bring more car manufacturing back to the U.S. In order to qualify for tariff-free treatment under the new NAFTA, more of a vehicle’s parts will need to be produced in North America, and a certain share will for the first time need to be built by workers making at least $16 an hour.”

“Whether this will be enough to satisfy longtime critics of the trade pact remains to be seen. Longtime NAFTA skeptic Robert Scott of the labor-backed Economic Policy Institute told me there was little sign Trump’s team had made progress on key issues: “It’s a press release in search of a real deal.”

“To sell it, Trump stuck mostly to bluster and hyperbole during his brief talk. The president got things started by announcing that it was a “big day” for trade, then puzzlingly suggested that NAFTA was ready for a name change.”

“They used to call it NAFTA. We’re going to call it the United States–Mexico Trade Agreement,” he said. “We’ll get rid of the name NAFTA. It has a bad connotation because the United States was hurt badly by NAFTA for many years. And now it’s a very good deal for both countries.”

“This seemed to be Trump’s way of hinting that he was ready to break up NAFTA into separate trade deals with Canada and Mexico—a controversial idea that would likely go down poorly with Congress and the business community, given that companies have built their North American supply chains to move goods around a single tariff-free zone, but that some members of his administration have hinted at before. When outgoing Mexican President Enrique Peña Nieto joined Trump on speakerphone , he politely urged Trump to keep Canada in the deal.” 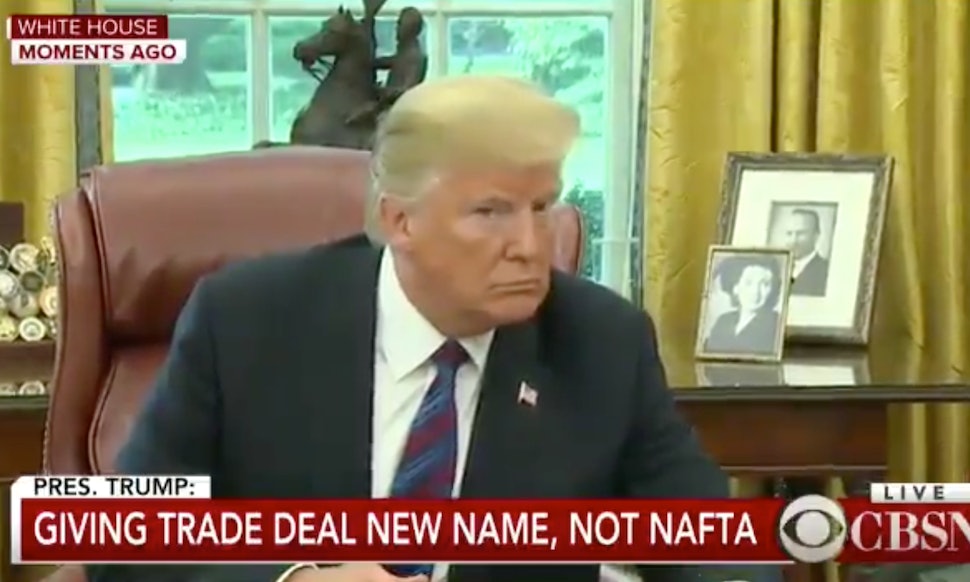 “It is our wish, Mr. President, that now Canada will also be able to be incorporated in all of this,” Peña Nieto said through a translator.

“This dance continued throughout the call, with Trump dangling the idea of booting Canada and Nieto restating that he hoped Canada would be “integrated into this process.” Talks between Ottawa and Washington have been on hold for a bit, but Trump promised that negotiations would start up again “shortly.”

“We can have a separate deal [with Canada] or put it into this deal,” he said. “I like to call this deal the United States–Mexico Trade Agreement. I think it’s an elegant name. I think NAFTA has a lot of bad connotations for the United States because it was a rip-off.”

“The president also suggested that if Canada did not negotiate revisions to NAFTA or a separate bilateral pact, he’d exact revenge by slapping tariffs on its auto industry. The White House has been weighing whether to levy taxes on foreign cars under the pretext of national security, much the way it did with foreign steel and aluminum.”