It seems that the premiere expert within the FBI on Russian organized crime is none other than the republican Donald Trump and his US congressional cohorts new #1 bogeyman, Bruce Ohr. Over the past 3 decades Mr. Ohr has been involved with every major case involving the Russia mafia in the US. Now why on earth, would the GOP be targeting to have him kicked out of the FBI.

It is not because his wife worked for the business that hired Christopher Steele who has become known as the author of the Steele dossier.

Here is the rest of the story..

“When a lawyer for one of Russia’s most powerful reputed crime bosses arrived at F.B.I. headquarters one day around 2006, he wanted to cut a deal. The Russian, Semion Y. Mogilevich, had been indicted three years earlier by the department on charges of defrauding a company outside Philadelphia out of $150 million and could not travel for fear of arrest.”

“As the lawyer made his pitch, a supervising F.B.I. agent and a senior career Justice Department official, Bruce G. Ohr, both listened intently, according to a former bureau official who described the meeting. The case was significant for American law enforcement. It had made headlines and laid the groundwork for Justice Department efforts to combat Russian organized crime overseas.”

“Finally, the F.B.I. agent spoke. No deal, he said; Mr. Mogilevich must surrender. Mr. Ohr said little, but his unwillingness to negotiate was signal enough: The Justice Department would not compromise with the Russian mafia.”

“Occasionally you run across people from the Justice Department who have an air of superiority toward agents, and Bruce had none of that,” said Chris Swecker, a former senior F.B.I. official who worked with Mr. Ohr. “He was just the opposite. He was well liked at the F.B.I. and fought for their cases.”

“In nearly three decades at the Justice Department, Mr. Ohr has made a career of supporting and facilitating important cases that targeted Russian organized crime. Now he is a target of President Trump, who has put his security clearance under review and attacked him  publicly, and allies. They have cast Mr. Ohr and his wife — who worked as a contractor at the same research firm that produced a damaging dossier of information about Mr. Trump — as villains, part of a pro-Clinton cabal out to destroy the president.”

“But Mr. Ohr, 56, is far from corrupt, friends and former colleagues said. An experienced law enforcement official, he has a deep understanding of the underworld of Russian organized crime, they said, including raising concerns about at least one oligarch whose name has resurfaced amid the scrutiny of contacts between Trump associates and Russia.”

“As part of this work, Mr. Ohr met a British spy who specialized in Russia, Christopher Steele, and the two men developed a bond based on their shared expertise. Mr. Steele went on to investigate ties between Mr. Trump and Russia for the same research firm, Fusion GPS, where Ms. Ohr was a contractor.”

“Those connections have upended Mr. Ohr’s once relatively anonymous life, dragging him into the maelstrom of the Russia investigation. Justice Department officials transferred Mr. Ohr, an associate deputy attorney general, to a less powerful post last year after learning about his contacts with Mr. Steele and the scope of his wife’s work. If he loses his security clearance, he would probably be forced to leave federal law enforcement after nearly three decades.”

“For him to be in the Justice Department, and to be doing what he did, that is a disgrace,” Mr. Trump said of Mr. Ohr this month to reporters.”

“On Tuesday (8/28/18), Mr. Ohr is to appear before a closed hearing of the House Judiciary and House Oversight committees, jointly investigating F.B.I. and Justice Department activities related to the 2016 election. Republicans are likely to ask Mr. Ohr why he met with Mr. Steele even after the F.B.I. terminated its relationship with Mr. Steele for speaking to the news media and who approved the meetings.”

“Those who know Mr. Ohr seem perplexed that the president has singled him out. Co-workers and former associates describe him as a scrupulous government official who cares deeply about the Justice Department.”

“He’s a small player in a bigger, broader stage here,” Mr. Swecker said. “I feel bad for him. I think he is well intentioned. I view him as someone who would never do anything malicious.”

“A graduate of Harvard Law School, Mr. Ohr joined the Justice Department in 1991 from a law firm in San Francisco. As a federal prosecutor in Manhattan, he twice won top awards and rose to be chief of the district’s violent gangs unit.”

“He had a knack for managing people and pushing cases forward, former associates said, which helped propel him to a job at the Justice Department in Washington in 1999 as the head of the organized crime and racketeering section. He provided the F.B.I. with resources to prosecute cases and navigated relationships with the intelligence community, brokering disputes and earning the respect of the F.B.I. and prosecutors.” 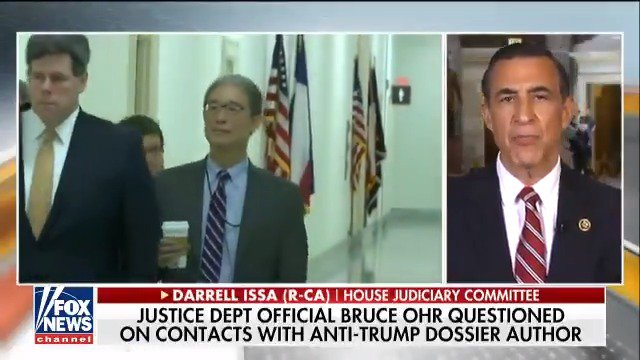 “As oligarchs and gangs flourished in Eurasia after the fall of the Soviet Union, Mr. Ohr, his deputies, the F.B.I. and federal prosecutors tackled Russian crime syndicates, said J. Kenneth Lowrie, a former federal prosecutor who was Mr. Ohr’s longtime deputy.”

“Mr. Ohr’s section supported the 2000 prosecution of Pavlo Lazarenko, the former prime minister of Ukraine, who was convicted of money laundering, wire fraud and extortion in a case brought by the office of the United States attorney in San Francisco at the time, Robert S. Mueller III, who is now the special counsel.”

“Mr. Ohr was a manager, not a litigator, who built bridges with law enforcement agencies around the world, former Justice Department officials said. He sent top deputies to Hungary to root out the nascent Russian mob in the early 2000s.”

“In 2006, Mr. Ohr was part of a group of government officials who revoked the visa of Oleg Deripaska, a Russian billionaire and aluminum magnate. Officials were concerned that Mr. Deripaska might try to come to the United States to launder illicit profits through real estate, a former law enforcement official said.”

“Mr. Deripaska, a close ally of President Vladimir V. Putin of Russia, has been tied to the former Trump campaign chairman Paul Manafort, who was convicted last week of tax and bank fraud. In 2016, Mr. Manafort offered private campaign briefings to Mr. Deripaska, raising concerns about the prospect of Russians wielding influence inside the White House. In April, the United States imposed sanctions on Mr. Deripaska.”

“In 2007, Mr. Ohr met Mr. Steele, who was still with MI-6, the British spy service, according to a former senior American law enforcement official who knows both men. Both governments approved their contacts, the former official said.”

“Mr. Ohr moved on to other senior jobs, starting in 2010 as counsel for international relations in the Justice Department’s transnational organized crime and international affairs section, where he bolstered partnerships with foreign law enforcement agencies. In 2014, he became the director of the Organized Crime Drug Enforcement Task Forces, distributing grant money to bolster prosecutorial work.”