Why Are US Senators Lindsey Graham And Rand Paul Acting Like Russian Stooges?

Recent US history has me as well as many other US political scene observers pondering what’s up with the Senators Rand Paul (R-KY) and Lindsey Graham (R-SC), as they have both been acting like Russian stooges, in their kowtowing to the republican President Donald Trump who acts, talks, and walks like a Russian asset living in the White House.

What is disheartening is how Senator Lindsey Graham who is supposed to be the late Senator John McCain’s BFF, acting like a turncoat as he throws his friend’s firm views regarding Russia’s nefarious goals, under the bus by pandering to the likes of President Trump. He does appear conflicted.

I watched a recent interview where Senator Lindsey explained that he feels it’s his duty to have a working relationship with the US president. But that doesn’t mean that it is then okay to provide cover for President Trump to fire his Attorney General Jeff Sessions to where he can then derail the FBI’s Trump Russia probe being led by the Special Counsel Robert Mueller III. Make no mistake. That is what the goal of firing Mr. Sessions is all about, ending the FBI’s Trump-Russian probe.

In contrast, Senator Rand Paul (R-Ky) does not appear to be at all conflicted, when acting as a Russian stooge as described in the below Weekly Standard.

I had noted a recent tweet by the journalist Scott Dworkin where he theorizes about how both senators may have been hacked by Russian operatives where information was obtained, resulting in both these elected officials having been compromised. In the past, Senator Lindsey admits that his emails were hacked by Russians but Senator Paul denied being hacked with words along the lines, that he had no data indicating that his emails had been hacked.

Frankly, both senators must realize that their actions have peoples wondering what’s up and if it is possible that they have been compromised by Russian agents…

As per 5/8/17 Time report by Katie Reilly, “South Carolina Sen. Lindsey Graham countered President Donald Trump’s previous comments about who was responsible for the hacks that influenced the 2016 presidential election during his opening remarks at a Senate Judiciary subcommittee hearing Monday,saying there was “no doubt in his mind” Russians were involved.”

“Graham cited intelligence findings that Russian operatives tried to interfere in the election by hacking into the Democratic National Committee computer network as well as the emails of Hillary Clinton campaign chairman John Podesta.”

“I think every American should be concerned about what the Russians did. From my point of view, there’s no doubt in my mind it was the Russians involved in all the things I just described — not some 400-pound guy sitting on a bed, or any other country,” Graham said. “Russia is up to no good when it comes to democracies all over the world.” As per a 12/14/16 CNN News report by Daniella Diaz, “Republican Sen. Lindsey Graham said Wednesday his campaign email account was hacked by Russians — adding that the US needs to work together to stop this from happening.”

“I do believe the Russians hacked into the (Democratic National Committee). I do believe they hacked into (John) Podesta’s email account. They hacked into my campaign account,” he told CNN’s Wolf Blitzer on “The Situation Room.” “I do believe that all the information released publicly hurt Clinton and didn’t hurt Trump. I don’t think the outcome of the election is in doubt. What we should do is not turn on each other but work as one people to push back on Russia.”

As per a 12/13/16 NPR transcript of interview between host David Greene and the republican Senator from Kentucky, Rand Paul, “Several Republican senators have expressed support for the CIA investigation into Russian meddling into the presidential election. David Greene talks to Sen. Rand Paul about why he’s one of them.”

Nominations for top jobs at the State Department go through the Senate Foreign Relations Committee, and one of its members is Kentucky Republican Senator Rand Paul. We had a broad conversation with him. We began with the CIA finding that Russia tried to tip the presidential election to Donald Trump. Trump has dismissed that finding, but some Republicans, including Paul, want an investigation. Though Senator Paul says even without the Russians, Trump would have won.

PAUL: I have actually no evidence other than what I see on the news. I have no extraordinary information that I’ve gotten through any kind of briefing to say that the Russians did anything. You know, what I’ve read in the press is that they say there might be Russian fingerprints on this. So, yeah, we should investigate it is all I’m saying.

GREENE: Your colleague John McCain, Republican from Arizona, suggested that if what the CIA is saying is true that this was an act of warfare from Russia. You agree with that?

PAUL: You know, I think that’s a little bit oversimplified, to tell you the truth. Foreign countries are always trying to hack into each other, and I’m assuming that we do some of the same. So I don’t know that it’s extraordinary that Russia might be trying to do this. The reason I think we should investigate it is so we can protect our national security interests.

GREENE: You were a candidate in this election in the Republican primary. Do you know if Russia hacked into your systems?

GREENE: They didn’t or you don’t know the answer to the question?

PAUL: “No, nobody’s ever made that insinuation, so that’s the first I’ve ever heard anybody ask about. But no, I have no evidence that anybody’s ever hacked into my email or anything with our campaign.” 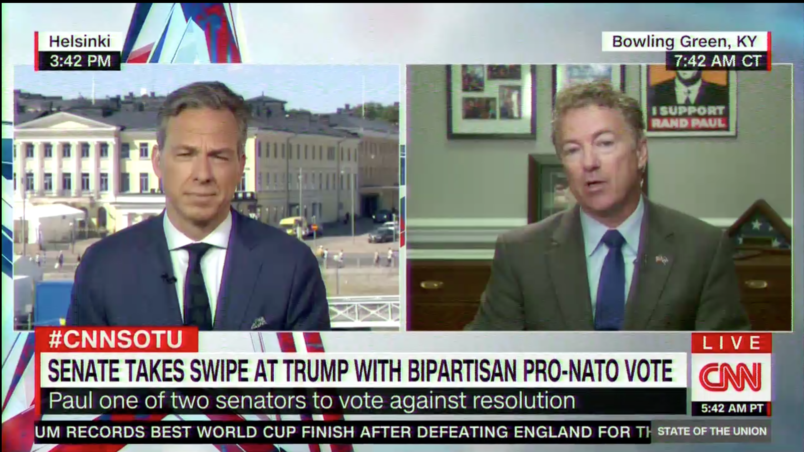 Compare Senator Rand Paul’s words in December of 2016 to what he is saying as of August 2018:

As per the 8/21/18 Weekly Standard report by Stephen F. Hayes, “Senator Rand Paul has been making the rounds in recent days touting deeper U.S. engagement with Vladimir Putin’s Russia. It’s often the case when Senator Paul talks about foreign policy his pronouncements are a curious admixture of odd conspiracy theories, pacifist banalities, and ahistorical analogies—all delivered with the confident condescension of someone who doesn’t have any idea what he’s talking about.”

“So it is with Paul’s lonely effort to provide intellectual backing for Donald Trump’s instinctive desire to make nice with the increasingly provocative regime run by the anti-American former KGB agent. Examples of Paul’s foolishness are legion but the most revealing came in an interview that the senator conducted on August 16, 2018, with The Liberty Report, an internet television show hosted by his father, libertarian gadfly and former congressman Ron Paul.”

“Senator Paul has lately made a cause of conciliation by concession—seeking to reverse sanctions on Russian lawmakers, blocking proposed sanctions on Russian oil interests, and more broadly, preventing punitive measures on Putin’s Russia in favor of dialogue and conversation. These efforts build on his past work downplaying Putin’s aggression and attacking those who highlight it.”

“When Sen. John McCain (R-Ariz.) died, Sen. Lindsey O. Graham (R-S.C.) lost one of his dear friends and his political and moral compass. For months as McCain’s health declined, Graham sank further into the quicksand of conspiracy theories (e.g. making a criminal referral regarding dossier author Christopher Steele) and cringe-worthy obsequiousness to President Trump. Whether it was congratulating Trump for beating him at golf or giving cover for Trump’s attacks on the FBI, Graham, many surmised, was seeking a Cabinet post. ”

“Graham reached a new low last week, when he supported the idea of canning Attorney General Jeff Sessions: “The president’s entitled to an attorney general he has faith in … I think there will come a time sooner rather than later where it will be time to have a new face and a fresh voice at the Department of Justice.” That was a far cry from his declaration in July 2017 that there would be “holy hell to pay” if Trump fired Sessions to get a stranglehold on the Russia investigation.”

On Tuesday (8/28/17), Graham sounded defensive. “You have to replace him with somebody who is highly qualified and will commit to the Senate to allow [special counsel Robert S. Mueller III] to do his job,” Graham said. “Nobody is going to take Jeff’s place that doesn’t commit to the Senate and the country as a whole that Mueller will be allowed to finish his job without political interference.” But what if the person later changes his mind? What if he aims to restrict Mueller so that he cannot do his job? Surely Graham must understand that anyone Trump would pick for the AG spot couldn’t be trusted to support the Russia investigation.”