US Has Been Through Hellish Times Before Like In 1968/ These Troubled Times in 2018, Too Shall Pass

NOTE: This is a reblog of an earlier post.

This is a walk down memory lane. For those who think these turbulent and disturbing time under the republican President Donald Trump can’t end soon enough and are worried about the harm being done to our country, it is helpful to recall past chaotic, frightening times which we have survived and overcome.

1968 was a truly , tempestuous year with the continuing Vietnam War without a clear victory in sight. Then there was the back drop of  two American icons’ assassinations, Martin Luther King Jr. and Robert Kennedy. There were the civil rights marches and protests, the anti-Vietnam protests, the riots and the women’s feminist movement.

In order to win the 1968 presidential election, the republican candidate Richard Nixon deliberately extended the timeline of the Vietnam War from 1968 to 1973. The year 1973 when US pulled out of  the Viet Nam War, was after he had been elected for a second 4 year term in 1972. President Nixon’s Watergate hearings began in June 1972 and he resigned in August 1974 rather than be impeached.

President Lyndon B. Johnson had discovered the Vietnam/ Nixon information but he did not publicly share it because he was convinced that the democratic candidate, Hubert Humphrey would win in 1968. But President Nixon squeaked out a victory of about 1% by his campaign’s tactic of catering to voters’ racist impulses. He invented  “the southern strategy.

Imagine this evil…Could this happen today? As per a 3/18/ 2013 Smithsonian Magazine report by Colin Schultz, “In 1968, the Paris Peace talks, intended to put an end to the 13-year-long Vietnam War, failed because an aide working for then-Presidential candidate Richard Nixon convinced the South Vietnamese to walk away from the dealings, says a new report by the BBC’s David Taylor. By the late 1960s Americans had been involved in the Vietnam War for nearly a decade, and the ongoing conflict was an incredibly contentious issue, says PBS:

“In 1967, with American troop strength in Vietnam reaching 500,000, protest against U.S. participation in the Vietnam War had grown stronger as growing numbers of Americans questioned whether the U.S. war effort could succeed or was morally justifiable. They took their protests to the streets in peace marches, demonstrations, and acts of civil disobedience. Despite the country’s polarization, the balance of American public opinion was beginning to sway toward “de-escalation” of the war.”

“Nixon’s Presidential campaign needed the war to continue, since Nixon was running on a platform that opposed the war. The BBC:”

“Nixon feared a breakthrough at the Paris Peace talks designed to find a negotiated settlement to the Vietnam war, and he knew this would derail his campaign.”

… “In late October 1968 there were major concessions from Hanoi which promised to allow meaningful talks to get underway in Paris – concessions that would justify Johnson calling for a complete bombing halt of North Vietnam. This was exactly what Nixon feared.”

“President Johnson had at the time a habit of recording all of his phone conversations, and newly released tapes from 1968 detailed that the FBI had “bugged” the telephones of the South Vietnamese ambassador and of Anna Chennault, one of Nixon’s aides. Based on the tapes, says Taylor for the BBC, we learn that in the time leading up to the Paris Peace talks, “Chennault was despatched to the South Vietnamese embassy with a clear message: the South Vietnamese government should withdraw from the talks, refuse to deal with Johnson, and if Nixon was elected, they would get a much better deal.” The Atlantic Wire:”

“In the recently released tapes, we can hear Johnson being told about Nixon’s interference by Defence Secretary Clark Clifford. The FBI had bugged the South Vietnamese ambassadors phone. They had Chennault lobbying the ambassador on tape. Johnson was justifiably furious — he ordered Nixon’s campaign be placed under FBI surveillance. Johnson passed along a note to Nixon that he knew about the move. Nixon played like he had no idea why the South backed out, and offered to travel to Saigon to get them back to the negotiating table.”

“Though the basic story of Nixon’s involvement in stalling the Vietnam peace talks has been around before, the new tapes, says the Atlantic Wire, describe how President Johnson knew all about the on-goings but chose not to bring them to the public’s attention: he thought that his intended successor, Hubert Humphrey, was going to beat Nixon in the upcoming election anyway. And, by revealing that he knew about Nixon’s dealings, he’d also have to admit to having spied on the South Vietnamese ambassador.”

” Eventually, Nixon won by just 1 percent of the popular vote. “Once in office he escalated the war into Laos and Cambodia, with the loss of an additional 22,000 American lives, before finally settling for a peace agreement in 1973 that was within grasp in 1968,” says the BBC.”

At the end of March, the sitting democrat President Lyndon B. Johnson announced that he would not be seeking a second presidential term after he almost lost the New Hampshire primary to a liberal democrat upstart, the MN. Senator Eugene McCarthy. His VP, Hubert Humphrey would become the favored candidate.  Richard Nixon was the republican establishment candidate who won the 1968 election. 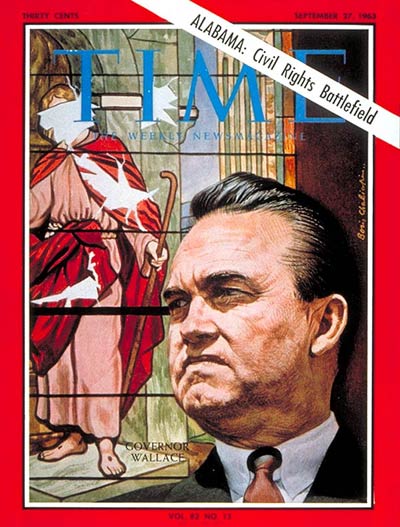 In 1968, there was the segregationist and Alabama Governor George Wallace, who decided to run an independent campaign for the presidency which experienced  significant support in the South and the Midwest.

“A major turning point for the American public’s anti-war sentiment occurred over the Viet Nam  Tet offensive started in January 1968. This offensive continued on for weeks as the U.S. withstood the highest number of injuries and casualty losses for our servicemen to date during this war. Without ever attaining a clear victory, this war continued until 1975.” (US pulled out in 1973.)

The author Charles Kaiser also compares the U.S. presidential  election history between today’s events and those in 1968 in his 3/13/16 Guardian article, “1968: How Donald Trump channels the spirit of one of America’s most violent years.” Here are some excerpts:

“For those with long political memories, Chicago was already famous as the scene of some of the most influential political violence of the last 50 years. As Theodore H White wrote in his making of the President series: “In 1968 the name Chicago won a significance far beyond date and place. It became the title of an episode, like Waterloo, or Versailles, or Munich.”

“When the Democrats held their convention in Chicago in August of that year, at the height of the Vietnam war, at least 10,000 anti-war demonstrators clashed with more than 20,000 policemen, national guardsmen and regular soldiers in the streets of Chicago.”

“And in an echo of the arrest at the Trump rally of CBS newsman Sopan Deb, in 1968, Chicago Mayor Richard Daley’s “security” team roughed up reporters inside and outside the hall.”

“Of course, the events of 1968 were of a greater scale than those recent rallies and protests by both Trump supporters and non-supporters. In 1968 there were several ant-Viet Nam protests with one on 8/28/1968 during the Chicago Democratic National Convention, involving 4 days of street fighting, where there had been more than 600 arrests. The Medical Committee for Human Rights estimated that it had treated at least 1,000 demonstrators. The Chicago police department counted 192 injured officers.”

“Democratic Senator Abraham Ribicoff of Connecticut (1968) used his turn at the convention podium to accuse Mayor Daley of using “Gestapo tactics… At that moment, the television cameras zoomed in on the Chicago mayor. Daley’s voice could not be heard, but to millions of lip-reading Americans, he had replied by screaming: “Fuck you!”

“(In 2016) the American political system once again seems to be careening out of control, as Donald Trump actively promotes violence among his supporters – “Knock the crap out of them, would you? Seriously. OK? … I promise you, I will pay for the legal fees.”

Robert F Kennedy was preceded  just 2 months earlier by the assassination of Martin Luther King Jr, a catastrophe which provoked race riots in 130 cities, requiring 65,000 soldiers and guardsmen to restore order. In Chicago, Mayor Daley ordered his police force to shoot to kill arsonists and “shoot to maim or cripple looters”; in the nation’s capital, fires and looting spread to within 2 blocks of the White House. Riot troops took up positions on the president’s lawn and machine gun nests sprouted on the steps of the Capitol.”

“But 1968 offers other echoes. On the Democratic side, Minnesota senator Eugene McCarthy played the insurgent role now occupied by Bernie Sanders of Vermont. It was McCarthy’s near-victory in the New Hampshire primary on an anti-Vietnam war platform that convinced Lyndon Johnson not to run for re-election and propelled an initially reluctant Robert Kennedy into the race. The establishment doppler for Hillary Clinton was Vice-President Hubert H Humphrey, chosen to be the nominee by the party establishment even though a large majority of primary voters had gone to Kennedy and McCarthy.” 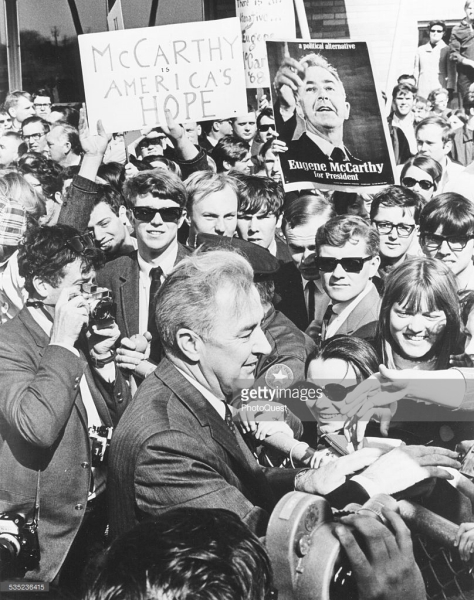 “Nixon deduced that many Americans craved a subtle stoking of unspoken prejudice that the riots of the spring had revived. Agnew was the perfect person to do that.”

“And as Trump has violated standards of decency and civility with his attacks on everyone from Muslims and Mexicans to reporters with disabilities, Agnew was famous for his ethnic slurs, referring to Poles as “Polacks” and calling a Japanese American reporter “the fat Jap”.

(Southern strategy) Nixon conveyed to voters through strong support for “law and order” and “states’ rights” and persistent attacks on the supreme court, then led by chief justice Earl Warren. All of this was code for allowing southern states to continue to resist school desegregation.”

“A line runs from 1968 to the present. Ronald Reagan continued this scheme, opening his 1980 presidential campaign with a speech extolling “states’ rights” at the Neshoba County fair, just a few miles from Philadelphia, Mississippi, a town made notorious by the brutal murders of three civil rights workers in 1964.”

“1968 was also the year that Richard Nixon invented the idea of “the silent majority” – such poorer, less-educated whites are clearly the group on whom Donald Trump is depending to propel him to the Republican nomination.”

“Appealing to white prejudice is clearly a game of diminishing returns; Black, Hispanic and Asian voting blocs are vastly more important now than they were in 1968. In 2012, with Barack Obama at the top of the Democratic ticket, for the first time there was higher black turnout than white – 66% of eligible blacks voted compared to 64.1% of whites.”

“Such demographic trends also explain the Republicans’ most anti-democratic impulse: the proliferation of voter ID laws throughout states controlled by GOP governors and legislatures. In the absence of any serious evidence of widespread voter fraud, the only purpose of these laws is the suppression of black and Hispanic voters.”

“The goal, of course, is to make the voting rolls continue to look as much as possible like they used to – in 1968.”