Do I strongly suspect that the current US Supreme Court nominee, Brett Kavanaugh will do his best to outlaw women’s rights to access legal abortions? The answer is, YES!

I’m certain of this because he has the full backing of the Federalist Society and its Executive VP Leonard Leo, who has made it his life’s mission to back judges who he knows will end, and/ or severely restrict a women’s right to access legal abortions. Mr. Leonard is devoting his entire work schedule at this time to help Mr Kavanaugh succeed, and he wouldn’t be acting accordingly if he weren’t certain of his intent. Thus Mr. Kavanaugh’s pledge to the republican pro-choice Senators Susan Collins and Lisa Murkowski, that he’ll treat the Supreme Court decision regarding Roe v Wade as settled law which allows women access to legal abortions, has virtually, no value.

In an aside, Mr. Leonard has also personally overseen the confirmation of the last 3 conservative justices, Samuel Alito, John G. Roberts Jr. and Neil Gorsuch.

In short, The Federalist Society is to republican conservatives, what the ACLU/ American Civil Liberties Union is to liberal democrats.

What stands out for me is Mr. Kavanaugh’s lack of ethics? This means that were I sitting on the US Senate Judicial Committee, I would vote to NOT confirm him to be the next Supreme Court justice, based on his apparent, flagrant lack of ethics.

There are 2 instances in his past which stand out to meet my test of smoking guns regarding my assertions.

One (with details below) involves him being misleading when answering Senator Patrick Leahy’s questions regarding his receipt of spying emails which he claimed no knowledge despite there being is proof that he did indeed have possession of them. His denials regarding these set of circumstances stretches one’s incredulity to a point where he is not believable.

Finally, there are republican leaders who are crying foul regarding a woman who claims that Mr. Kavanaugh sexually assaulted her when she was in high school. They are attacking her credibility. At this point, it is my contention that the person who lacks credibility, is none other than Judge Brett Kavanaugh, himself.

UPDATE 9/17/18: On the 16th of September, the accuser has publicly come forward. Her name is Christine Blasey Ford. She’s a professor who has passed a polygraph test.

The republicans have released a letter to the public where 65 women from his High School vouch for him being a perfect gentleman. This was within a few hours of them being informed of this assertion, which tells me that they were prepared ahead of time. Excuse me, but not all of these 65 women dated Mr. Kavanaugh while he was drunk, and so their testimony means little.

This case hearkens back to a time (1991), when Anita Hill made similar assertions against the current sitting Supreme Court Justice Clarence Thomas. After, she was discounted based in part by testimony from Mr. Thomas’s other female working colleagues, his confirmation was rushed through, but then later, three other women came forward with claims similar to that of Anita Hill.

As per 9/7/18 Washington Post report by Michael Kranish, “This week’s hearing was the latest effort by Leahy to suggest Kavanaugh knew he had received information improperly taken from Democrats. He questioned Kavanaugh about the matter in confirmation hearings in 2004, when Kavanaugh’s nomination for the federal appeals court was stalled, and in 2006, when Kavanaugh won confirmation. During both hearings, Kavanaugh said he learned about Miranda’s action only from news reports, and Leahy did not have access to Kavanaugh’s emails.”

“That changed at this week’s hearings, when the committee released a number of previously undisclosed emails that (Senator Patrick) Leahy said raised new questions about Kavanaugh’s knowledge that the documents were improperly taken.”

“In a July 28, 2002, email, Miranda wrote Kavanaugh that Leahy’s staff has distributed a confidential letter to Democratic staffers, and then described the contents of the letter.”

Link to entire article: Leahy says Kavanaugh was ‘not truthful’ about Democratic documents

On July 10, 2018, Elie Mystal of Above The Law penned the following report,  “Did Brett Kavanaugh Know About Alex Kosinski” (“Will anybody ASK him?”)

“The media is busy falling over itself praising the sterling résumé  of Judge Brett Kavanaugh. But one key validator is missing from the Kavanaugh party, former Ninth Circuit Judge Alex Kozinski.”

“Kavanaugh clerked for Alex Kozinski in 1991. Kavanaugh would not have been a clerk for Justice Anthony Kennedy if he hadn’t first been a clerk for Kozinski. Kozinski was a prominent and popular feeder judge to the Supreme Court, and a moderate, or at least “non-Trumpian” conservative who could be a useful voice in Kavanaugh’s favor at this time.”

“Of course, we all know why Kozinski isn’t in front of the cameras standing by his former clerk. Kozinski resigned from the Ninth Circuit in disgrace after allegations of sexual harassment surfaced. Kozinski is one of the only federal judges to be held accountable for his actions in the #MeToo era.”

“This isn’t some guilt by association thing. Reports indicate that even after his time as a clerk, Kavanaugh and Kozinski remained close. He was there while harassment was allegedly occurring.”

“Courtney Milan, a law professor turned romance novelist who clerked for Kozinski, has been tweeting about just how deep the connection was between the two men:”

They worked together on hiring.

Kozinski regularly used belittling and demeaning language in hiring with us as his clerks.

I cannot attest to whether he used it in Kennedy screening, but it would surprise me if he didn’t.

“There’s an opposition research document on Kavanaugh that made the rounds that tried to make this point. See: Politico.”

Link to article: Did Brett Kavanaugh Know About Alex Kozinski? | Above the Law

On September 14, 2018, Ronan Farrow and Jane Mayer of the New Yorker penned the following report, “A Sexual-Misconduct Allegation Against the Supreme Court Nominee Brett Kavanaugh Stirs Tension Among Democrats in Congress”

“On Thursday, Senate Democrats disclosed that they had referred a complaint regarding  President Trump’s Supreme Court nominee, Judge Brett Kavanaugh, to the F.B.I. for investigation. The complaint came from a woman who accused Kavanaugh of sexual misconduct when they were both in high school, more than 30 years ago.”

“The woman, who (at first) asked not to be identified, first approached Democratic lawmakers in July, shortly after Trump nominated Kavanaugh. The allegation dates back to the early nineteen-eighties, when Kavanaugh was a high-school student at Georgetown Preparatory School, in Bethesda, Maryland, and the woman attended a nearby high school. In the letter, the woman alleged that, during an encounter at a party, Kavanaugh held her down, and that he attempted to force himself on her. She claimed in the letter that Kavanaugh and a classmate of his, both of whom had been drinking, turned up music that was playing in the room to conceal the sound of her protests, and that Kavanaugh covered her mouth with his hand. She was able to free herself. Although the alleged incident took place decades ago and the three individuals involved were minors, the woman said that the memory had been a source of ongoing distress for her, and that she had sought psychological treatment as a result.” 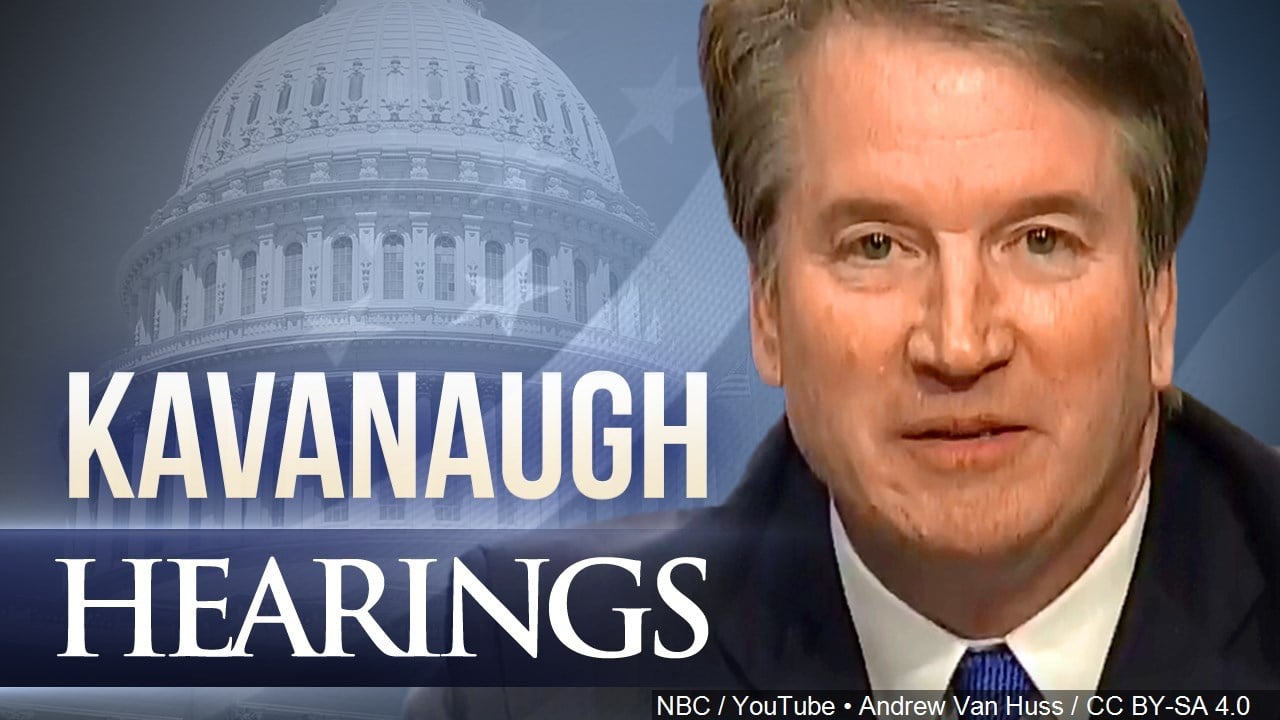 “In a statement, Kavanaugh said, “I categorically and unequivocally deny this allegation.”

“Kavanaugh’s classmate said of the woman’s allegation, “I have no recollection of that.”(That’s not an outright denial.)

“In recent months, the woman had told friends that Kavanaugh’s nomination had revived the pain of the memory, and that she was grappling with whether to go public with her story. She contacted her congresswoman, Anna Eshoo, a Democrat, sending her a letter describing her allegation.”

“The letter was also sent to the office of Senator Dianne Feinstein. As the ranking minority member of the Senate Judiciary Committee, Feinstein was preparing to lead Democratic questioning of Kavanaugh during his confirmation hearing weeks later.”

Link to article: A Sexual-Misconduct Allegation Against the Supreme Court Nominee