Why God Is Laughing At Brett Kavanaugh And His Fellow Republicans 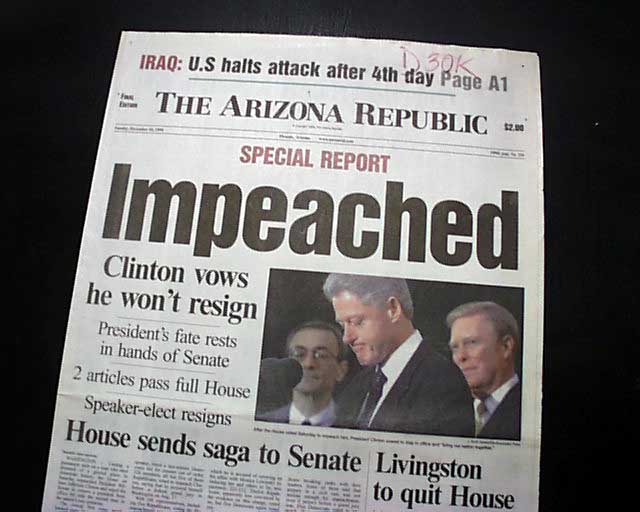 Remember the gentlemen who went after President Bill Clinton tooth and nail for his sexual misdeeds when he presided in the White House. Well Judge Brett Kavanaugh was one of those players who relished pontificating on President Clinton’s lack of moral character. It was Mr. Kavanaugh who recommended to the Special Prosecutor Kenneth Starr that he ask President Clinton questions about his sexual peccadilloes in the most salacious way possible.

Just read what the republican Senators Orrin Hatch and Chuck Grassley stated for the record (below), as to why they voted to impeach President Clinton in 1996, and they are the same ones who are fast -tracking the confirmation process through the US Senate Judiciary Committee, for Judge Brett Kavanaugh to become the next US Supreme Court Justice. Today, they are crying foul as a 51 year old woman is bringing a 36 year old of attempted rape allegation against Judge Kavanaugh.

Then there are the 1991 Anita Hill/ Clarence Thomas Hearings when Anita Hill made similar assertions against the current sitting Supreme Court Justice Clarence Thomas. After she was discounted based in part by brutal questioning from republican Senators like Orrin Hatch and by testimony from Mr. Thomas’s other female working colleagues, his confirmation was rushed through where he came a sitting Supreme Court justice for life. But later, three other women came forward with claims similar to that of Anita Hill.

The republicans are busy in exercising their power to push through this SCOTUS nomination of Judge Brett Kavanaugh which has nothing to do with the search for truth.

As per a 9/17/18 New York Times report, The chairman of the Senate Judiciary Committee Chuck Grassley, under mounting pressure from senators of his own party, will call President Trump’s Supreme Court nominee, Judge Brett Kavanaugh, and the woman who has accused him of sexual assault before the committee on Monday (9/24/18) for extraordinary public hearings only weeks before the midterm elections.

In setting the hearing, Senator Charles E. Grassley, Republican of Iowa, backed down from a committee vote on Judge Kavanaugh’s nomination, planned for this Thursday (9/20/18), and pushed a confirmation once seen as inevitable into limbo.

Link to report: Brett Kavanaugh and His Accuser Say They’re Willing to Testify

“American politics is about power, not principle. If anyone should know this, it’s Brett Kavanaugh.”

“It is on this point that the cosmos may be having a laugh not just at Kavanaugh’s expense but at many other people’s. After decades of competitive moralizing and situational ethics—in which every accuser in due course becomes the accused, and anyone riding a high horse can expect to be bucked off—even the concept of fairness in American politics seemingly is defunct.”

“Three decades of remorseless ideological and cultural combat—over Robert Bork, over Clarence Thomas and Anita Hill, over Bill Clinton and Newt Gingrich, over Bush v. Gore, and, at last and above all, over Donald Trump—have made the question virtually irrelevant.”

“Fairness is rooted in the idea of principles, precedent, proportionality. Few people in American life witnessed at closer range than Kavanaugh the modern reality that when things really matter—in the way that the balance of the Supreme Court matters—all these fine notions matter less than the cold, hard exercise of power.”

“So here was Kavanaugh—who spent his early 30s as a Ken Starr warrior pursuing Bill Clinton for the political and legal implications of his most intimate moral failings—now in his early 50s facing a political crisis over disturbingly vivid, passionately contested, decades-old allegations about Kavanaugh’s own possible moral failings.”

“Few prosecutors, it seems likely, would ever open an assault case—36 years later—on the basis of Christine Blasey Ford’s account of being pinned down on a bed by a drunken Kavanaugh, then 17, and being aggressively groped until a friend of his physically jumped in.”

“But few prosecutors in the 1990s would have pursued an extensive criminal investigation over perjury into a middle-aged man’s lies about adultery if that person had not been President Bill Clinton. In his zeal at the time, Kavanaugh, like Starr, may have worked himself into a belief that this was about sacred principles of law, but to many others—and ultimately to a clear majority of the country—it was obvious that the case was fundamentally about political power.”

“Kavanaugh’s fate, too, now depends on precisely the same thing: Do the allegations change the calculation for the perhaps half-a-dozen senators—including Republicans Susan Collins of Maine and Lisa Murkowski of Alaska—whose minds were not already made up by earlier political calculations?”

“With the benefit of hindsight, Kavanaugh later concluded presidents should be shielded from criminal investigations of the sort he helped wage against Clinton. At the time, however, he was filled with righteous indignation. “It’s our job,” he wrote colleagues in Starr’s office in an email, “to make his pattern of revolting behavior clear—piece by painful piece.”

“Can Kavanaugh and his supporters really be surprised that opponents of his nomination will feel similarly righteous in wanting to examine allegations against him piece by piece?”

“There was ample talk 9/16/18 of the political equivalent of a statute of limitations, especially with so many women who know Kavanaugh in a variety of personal and political contexts speaking on his behalf. But the people who plead for such a grace period now generally did not raise their voices in the 1990s when Juanita Broaddrick accused Bill Clinton of rape 20 years before or when Trump invited her to attend a presidential debate as a prop for him in 2016.”

“With a vote on his career-long dream of serving on the high court scheduled for three days from now, Kavanaugh can be forgiven if he is not in an ironic frame of mind.”

“Never mind fairness, this is about votes—is one that has often served Kavanaugh and his fellow partisans well.”

“The most vivid example may be Bush v. Gore, when Kavanaugh as a GOP lawyer helped the Bush team prevail in the courts after losing the popular vote and after a bitter contest about his effort to count votes in Florida. In a 5-4 vote, the alleged strict constructionists on the Supreme Court decided in Bush’s favor even when the Constitution has no provisions for a contested election to be resolved by the court.”

“That was fundamentally a decision about power more than law, most Democrats reasonably believe—and certainly it was made without reference to what would feel fair to Gore—and it sent Kavanaugh to a senior job in George W. Bush’s White House and then on to the federal appeals court.”

“Merrick Garland could hardly be blamed for cursing the unfairness of being nominated for the Supreme Court but being denied a vote by Republicans waiting for the next presidential election. But presumably, Neil Gorsuch—nominated by another president who took office under exotic circumstances after losing the popular vote—is not burdened by the unfairness of it all.”

“It’s a truth that Kavanaugh and his backers will reckon anew as they try to hold on to what even before Sunday was a very precarious margin of support. What’s fair is in the eye of the beholder. But, even more, in the power-obsessed capital which he has happily inhabited his adult life, it is in the eye of whoever holds the votes.”