Why, Oh Why Is The GOP Pro-Choice Senator Collins Trying To Justify Voting For Kavanaugh?

I don’t get how or why the GOP Senators Lisa Murkowski of Alaska and Susan Collins of Maine who have claimed the pro-choice mantel when running for their elected seats, are still trying to get away with voting in favor of confirmation for the Supreme Court’s nominee Judge Brett Kavanaugh by claiming that he has promised to respect the fact that Roe v Wade is settled law. This stand, by these senators is problematic due to the fact that Judge Kavanaugh is approved and backed by the Federalist Society, a conservative organization infused with Catholic dogma which is against legal abortions and same sex marriages.

As per a 9/25 NY Times report, “Both senators were particularly interested in Judge Kavanaugh’s views on Roe v. Wade, the 1973 landmark decision that established a constitutional right to abortion, but privately, fellow Republicans believed the judge had likely won their support — and with it a ticket onto the court.”

“Those views will still impact their decisions, both senators have said. Ms. Murkowski said on Monday (9/24/18) that Mr. Kavanaugh had laid out for her a powerful case about the importance of precedent and the “reliance of interest” it creates.”

“How he articulated how it had been reinforced in so many different steps, I certainly have greater confidence with the way that he portrayed to me how he views Roe,” she said.

Of course, approving a judge to serve on the US Supreme Court who has the attributes of  integrity and a strong ethical core, has value. Judge Kavanaugh cannot lay claim these standards while he and his backers are impeding an independent investigation by the FBI into the assertions by women who have accused him of sexual abusive behaviors in his early years while he was in high school and college. 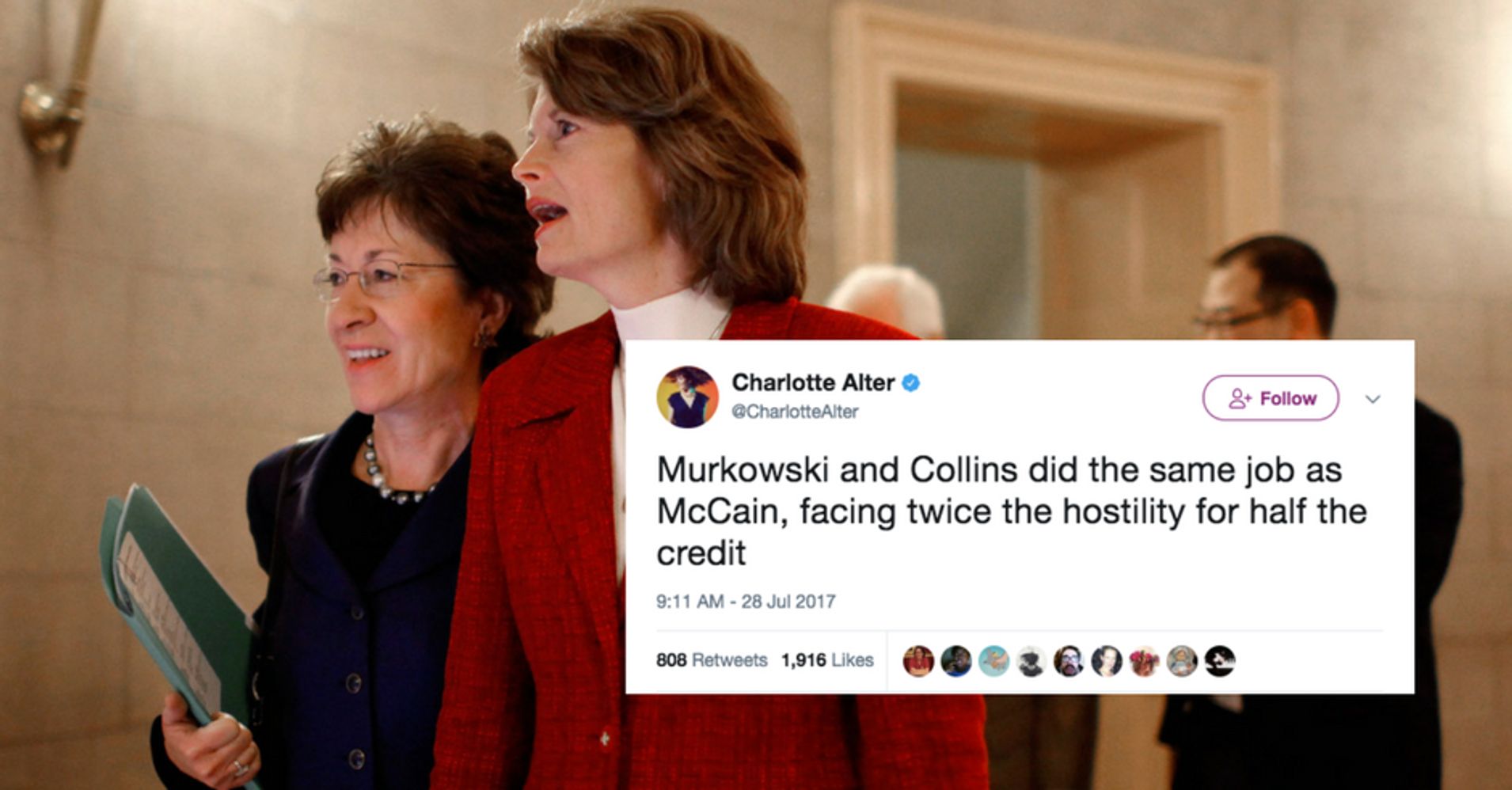 At the very least, these two pro-choice GOP senators should be demanding, that the FBI be assigned to do a more extensive background check on Judge Kavanaugh which would include its agents checking out the facts of these women’s allegations, before continuing the process to confirm Judge Kavanaugh. If he is proven to be lying about his innocence, then his word has little value.

What I suspect, is that the behaviors as alleged by Dr. Christine Blasey Ford and Debbie Ramirez are not isolated events but instead, part of a developed pattern of misbehaving that Judge Kavanaugh was a party to, during his high school and college days.

Just suppose the worst case scenario happens, where it is proven that Judge Kavanaugh is not being truthful. Isn’t it better that this be known now, rather than later, thus giving another more qualified nominee the opportunity to sit on the highest court in the USA.

Is it possible that the GOP lawmakers don’t care about Judge Kavanaugh’s possible lack of high ethical standards as long as he makes rulings in favor of their side?

On September 25, 2018, Jennifer Rubin of the Washington Post penned the following opinion piece, ‘Susan Collins at least can do this much’

“For reasons that confound longtime supporters and women’s groups (which until now have overlapped), Sen. Susan Collins (R-Maine) seems bound and determined to confirm Judge Brett M. Kavanaugh despite ample grounds for believing he will curtail if not undo existing constitutional protection for women seeking abortions.” 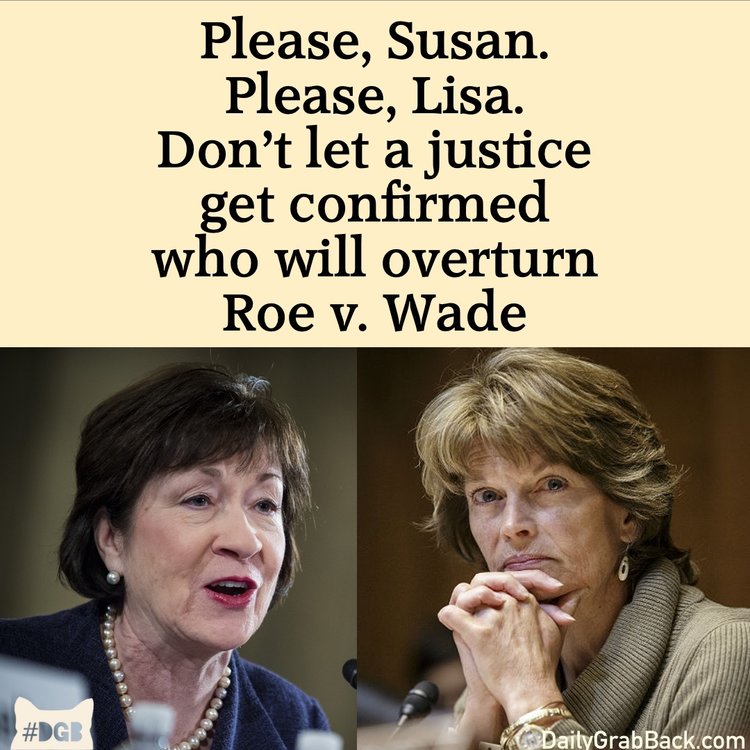 “She was singing her “Oh, Roe is in no danger!” song on Friday on Showtime, which released a clip on Monday. “Well, first of all, I do not believe he’s going to repeal Roe v. Wade,” she proclaimed. (She was also certain that if she voted for the Republicans’ tax plan eviscerating the Affordable Care Act’s individual mandate, she’d get a vote on her bipartisan reform proposals; she was snookered then, too.)”

“Maybe Collins feels compelled to disbelieve all available evidence because she wants desperately to stay in her party’s good graces, or likes Senate Majority Leader Mitch McConnell (R-Ky.), or remembers Kavanaugh favorably from his days in the Bush administration (he worked on judicial appointments; she was one of the gang of 14 that struck a compromise on confirmation of judges). Whatever the reason, she insists to her pro-choice supporters that she is not abandoning them. They vow to go after her hammer and tongs in 2020 if she votes to confirm Kavanaugh. They are exasperated with her unwillingness to be candid about Roe’s prospects with Kavanaugh on the court.”

“The allegations of sexual misconduct by Kavanaugh from two women, however, pose a new, knotty problem for Collins. She has said both Deborah Ramirez and Christine Blasey Ford should have the chance to tell their accounts, yet she has not demanded the most elementary steps if the goal is to find out the truth.”

“So far, she has not insisted on an FBI investigation.”

“If the Thursday hearing comes along and Ford appears sincere and credible while Kavanaugh insists he didn’t know her, never behaved that way, wasn’t a habitual heavy drinker (his roommate at Yale says he was an excessive drinker) and insists that Mark Judge, a friend from high school days, wasn’t involved in any sexual exploits with him, she’ll have three options: 1.) Vote to confirm, incurring the wrath of pro-choice voters, sexual-assault victims’ groups and every Democrat in Maine; 2.) Vote against confirmation, risking confrontation (heavens to Betsy!) with her party or 3.) Stick to her original argument that both accusers need to be heard. She doesn’t have to say yes or no, at least not for some time, if she merely invokes the process that was used in the Anita Hill matter — an FBI investigation, hearings with multiple witnesses and a full vetting of his record.”

“Republicans would still have a chance to confirm Kavanaugh — before or after the midterms — if everything checks out. Kavanaugh would have a chance to clear his name, and the credibility of the Senate and the Supreme Court would be protected. Even the White House now concedes that Ramirez should have the chance to testify under oath. That won’t happen if the Senate rushes to a vote on Friday or Saturday.”

“Benjamin Wittes recently wrote in the Atlantic that Kavanaugh should withdraw his nomination to avoid fighting on terms that would do him, the court and the country no good:”

I would tell him he almost certainly should have his nomination withdrawn. The circumstances in which he should fight this out are, in my view, extremely limited. I would advise him against letting Senate Republicans ram his nomination through in a fashion that will forever attach an asterisk to his service on the Supreme Court. Assuming she is not impugning him maliciously, Kavanaugh’s accuser, Christine Blasey Ford, deserves better than that. The Court deserves better than that. And Kavanaugh himself, if he is telling the truth about his conduct in high school, deserves better than to be confirmed under circumstances which tens of millions of people will regard, with good reason, as tainted. …

It is possible to imagine his testimony shoring up support among those who want to support him but leaving everyone else with real doubt. This would be, in my view, a disaster for anyone who believes in apolitical courts. And it is not what Kavanaugh should want. Clearing one’s name sufficiently to convince only senators who are already ideologically aligned is not, in fact, clearing one’s name. It’s winning. And while winning may be the highest value for Trump, it isn’t actually the highest value—particularly for a justice.

“Alas, Kavanaugh has already gone down the path — participating in a crass ploy for sympathy on Fox News and sitting idly by (at the very least) as allies cook up ludicrous conspiracy theories that pull the country apart and only reaffirm the view of many Americans that the Supreme Court is filled with political hacks.”

“His willingness to do this shows an unfortunate lack of concern for the court and overweening ambition of the type that already has corrupted once sober-minded conservatives. His reluctance to take a lie-detector test or to call in the FBI is baffling if he’s truly innocent.”

“That said, if he doesn’t have the wisdom to pull back, get a full vetting and create some grounds for consensus, Collins can force him to do so by insisting on a full investigation.”