It is becoming patently obvious that the GOP members of the US Senate Judiciary Committee are stating that they want to give a fair hearing to Dr. Christine Blasey Ford to share her assertions about the attempted rape assault by the current Supreme Court nominee Brett Kavanaugh and his friend Mark Judge while she was in high school, but not really.

The tell is that these GOP US senators are refusing to accede to Dr. Ford’s and the additional women’s demands (who have gone also public with complaints against the judge) for an independent investigative body like the FBI to do a more extensive background check on Judge Brett Kavanaugh and the facts surrounding the allegations made by them.

This tells me that they are setting up the woman or women for a ‘he said, she said‘ style of hearing on 9/27/18. That explains why the GOP lawmakers are refusing to allow for the FBI to check out all the accusers’ allegations which is because they don’t want to deal with the facts that would probably be uncovered. Without the investigation and without any discovery, the republicans can keep saying over and over again, there is nothing to corroborate their stories which is an outright lie.

As per numerous reports, Judge Kavanaugh liked to drink to excess, a fact he’s downplaying. But there are numerous references like in his yearbook, being the treasurer of the ‘100 kegs club;’ like in his friend Mark Judge’s 1997 tell-all book book where he refers to the character Bart O’Kavanaugh.

The republican’s strategy is becoming clear: Republicans are giving the accusers a chance to be “heard” — but denying them the opportunity to be believed.

For further verification of my thesis, here is the 9/25/ 2018 Politico report,“The Senate Judiciary Committee will vote on Brett Kavanaugh’s nomination to the Supreme Court on Friday morning, fewer than 24 hours after Kavanaugh and Christine Blasey Ford appear before the panel to discuss Ford’s allegation that Kavanaugh sexually assaulted her more than 30 years ago.

According to committee rules, Judiciary must schedule a committee vote three days in advance. But the committee said the vote will only proceed if a “majority of the members” of the 21-member committee are ready to vote on Friday.

On the September 25, 2018, Tara Golshan of VOX penned the following report, “Republicans keep saying there’s no evidence behind claims of Kavanaugh’s misconduct. That’s not true.”

“No location, no date, and no witnesses,” Sen. Roy Blunt (R-MO) said Tuesday to sum up Christine Blasey Ford’s accusation that Kavanaugh sexually assaulted her in high school — seemingly minimizing her first-hand account.”

“Senate Republicans want it both ways; they’re already claiming the accusations are not credible, but many, like McConnell, have stopped short of calling the accusers liars — a window into the high-stakes political calculations around #MeToo allegations.”

“It should be clear now to all Americans that Democrats are engaged in a coordinated effort to stop Judge Kavanaugh’s confirmation by any means possible,” Sen. Orrin Hatch (R-UT), a top Republican on the Senate Judiciary Committee, said in a statement Monday. “As I have said before, every accuser deserves to be heard. Moreover, a person who has committed sexual assault should not serve on the Supreme Court.”

“Two women have come forward with allegations against Kavanaugh, dating to his high school and college days. Ford, a Palo Alto University professor, said Kavanaugh pinned her down at a party in high school, tried to take off her clothes, and forced himself on her. Deborah Ramirez, who went to Yale with Kavanaugh, said he exposed himself to her at a party, thrusting his penis in her face. Kavanaugh has denied both allegations aggressively. Hatch has said he thinks Ford is “mistaken” but went on to call Ramirez a “phony.”

“This week Ford will testify to her account in front of the Senate Judiciary Committee. Kavanaugh will do the same, likely resulting in nothing more than the he-said, she-said debate that’s already unfurled in a week of media reports. Soon after, McConnell has said, there will be a vote on Kavanaugh’s nomination. The strategy is becoming clear: Republicans are giving the accusers a chance to be “heard” — but denying them the opportunity to be believed.”

Republicans keep saying there are “no witnesses” to these allegations

“Republican leaders have been questioning the validity of these sexual misconduct allegations since they were first made public, calling them a partisan attack against Kavanaugh.”

“Senate Democrats and their allies are trying to destroy a man’s personal and professional life on the basis of decades’ old allegations that are unsubstantiated and uncorroborated,” McConnell said on the Senate floor 9/24/18. “This is what the so-called resistance has become: a smear campaign, pure and simple, aided and abetted by members of the US Senate.”

“On the latest allegations from Ramirez, Majority Whip John Cornyn tweeted that “only a partisan would claim these credible without evidence.”

“To be clear: There is evidence — for both the accusers’ accounts, and in Kavanaugh’s defense.”

“I gather some people thought we were trying to knock down her [Ramirez’s] account, but that’s not what we were doing. I’m not questioning their story,” Baquet said in a statement. Farrow also commented on Baquet’s statement, saying he had exclusive access to Ramirez.”

The NYT reiterating that they did not “decline” or “pass” on the Ramirez story as claimed by several conservative politicians. They were simply unable to secure the central interview with her (or with the contemporaneous corroborators who spoke to NYer): https://www.nytimes.com/2018/09/24/us/politics/brett-kavanaugh-confirmation.html …

“Nevertheless, McConnell said that the allegations are “so dubious” that the NY Times didn’t find the story “fit to publish.”

“The New Yorker’s story was clear that Ramirez said she had holes in her memory and that she was originally reluctant to come forward with the account, only doing so after 6 days of reflection.”

“One classmate of Ramirez said he was “one-hundred-per-cent sure” that another student told him about the incident after it happened, independently recalling several of the same details. The New Yorker, however, couldn’t corroborate the story with anyone Ramirez remembered to be at the party. Another former student, Richard Oh, now a California-based doctor, also recalled hearing about the incident.”

“In Ford’s case, her allegations were documented by her therapist in notes from sessions in 2012 and 2013, in which Ford talked about a “rape attempt” and being attacked by students “from an elitist boys’ school.” She also took and passed a polygraph test, which of course isn’t a fully reliable method of fact-seeking.”

“Republicans however, insist there is no evidence to her claims. They cite a denial from Mark Judge, Kavanaugh’s classmate who was allegedly present at the time of the incident, as well as from Patrick J. Smyth, who Ford named as being at the party, but has denied attending. A woman Ford said was at the event, Leland Keyser, said she doesn’t know Kavanaugh.”

Kavanaugh said Monday night that it’s completely possible these women have been sexually assaulted at some point in their lives — just not by him — a level of carefulness many Republicans are following. (Hatch, who of course did call Ramirez a “phony” said he thought Ford was “mistaken,” raising questions about her memory.)

Republicans’ message is clear: There’s no reason to believe these allegations. 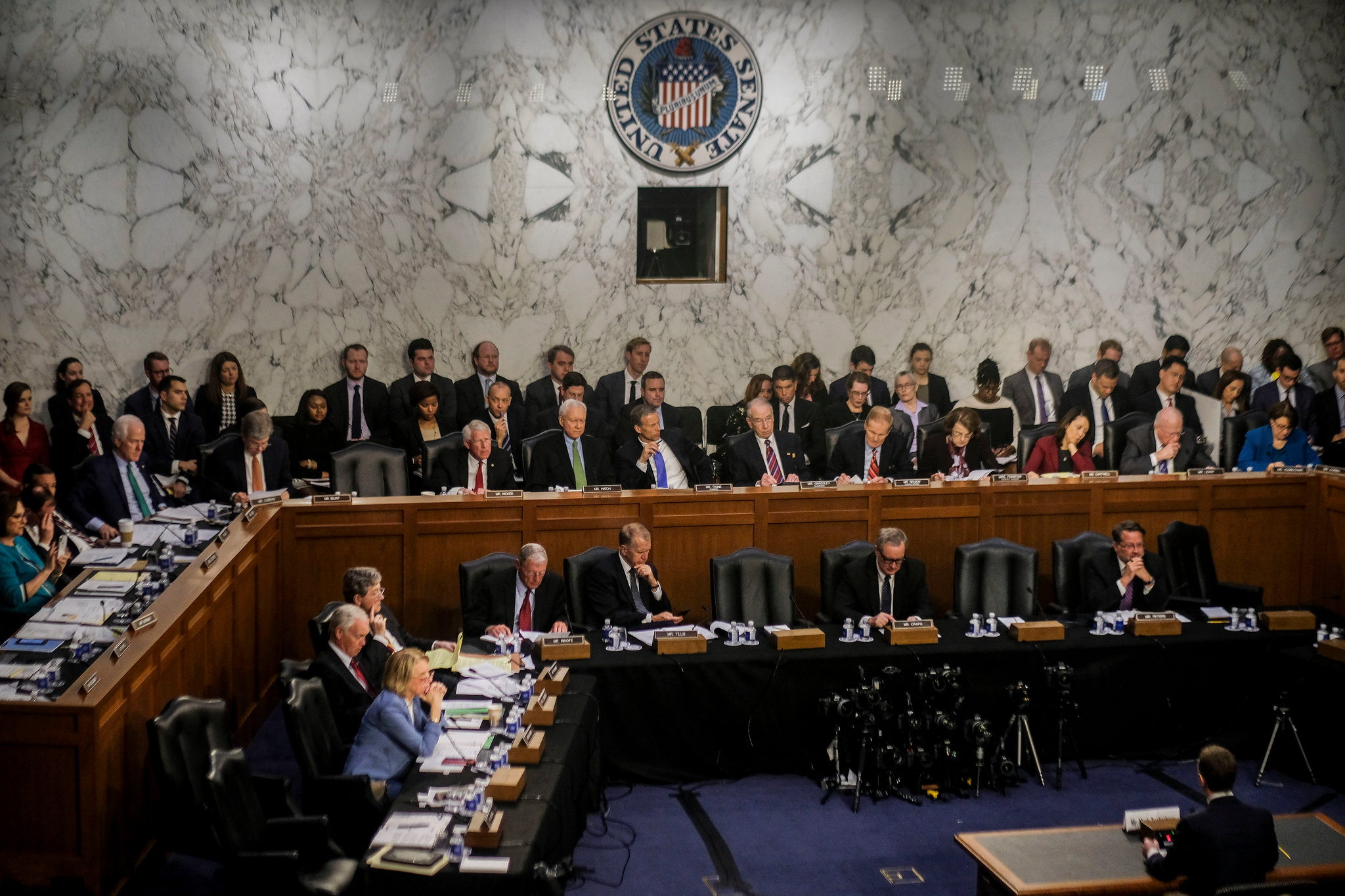 Republicans are making this a he-said, she-said debate. They already said who they trust more.

Kavanaugh is a well established name in conservative circles. Republican senators are quick to tell you that they know him — and more importantly — don’t know the accusers.

“I have no reason not to believe him,” Sen. Bob Corker (R-TN) said last week of Kavanaugh in the wake of Ford’s allegations. “We have never seen this person. It just happened 5 days before a vote and 35 years ago. I do think Kavanaugh has handled himself well. We didn’t know who she was.”

“Hatch said the same: “I think she’s mistaking something, I mean, I don’t know her.”

“The descriptions of Ford from her acquaintances and colleagues, in fact, bear a close resemblance to how Republicans have described Kavanaugh. It raises an important factor: Who seems credible will be crucial if Ford and Kavanaugh both testify before the Senate committee.”

” Senate Judiciary Committee Chair Sen. Chuck Grassley said he did not think it was necessary to question more than Kavanaugh and Ford. With Ramirez’s most recent allegations, Senate Majority Whip Sen. John Cornyn (R-TX) said the Senate was in talks with her lawyer.”

“As scheduled, the hearing 9/27/18 will be nothing more than a he-said, she-said back and forth. And Republicans have already said where they stand on that debate.”

“Ford should be heard, they’ve said — just not believed.”