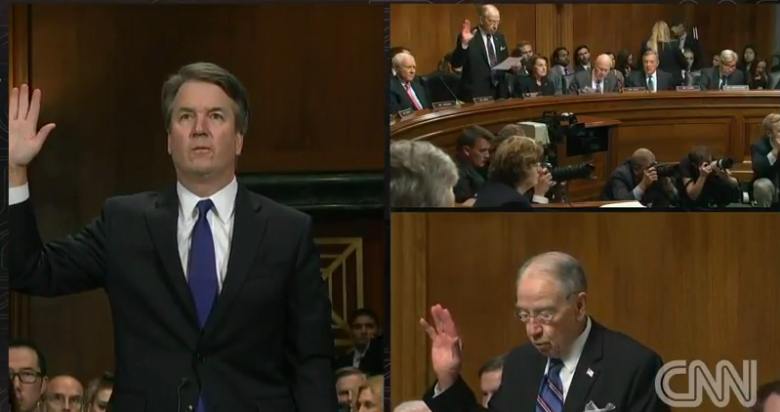 UPDATE 9/28/18: The US Senate Judiciary Committee republican Chairman Senator Chuck Grassley states that he’s planned to conduct the vote to approve the Supreme Court nominee Judge Brett Kavanaugh out of the  judiciary committee on 1:30 PM (Eastern Time) on the 28th of September 2018.

During the US Senate Judiciary Committee’s hearing on the 27th of September 2018, the US Supreme Court Nominee Judge Brett Kavanaugh frequently referred to the high rating he received from the (ABA) American Bar Association. But now this same organization has written a letter to both the Senate Judiciary Chairman Senator Chuck Grassley and the ranking Democrat Senator Dianne Feinstein requesting that a FBI investigation be conducted before the nominee Judge Kavanaugh becomes confirmed to sit on the US Supreme Court, based on Dr. Christine Blasey Ford’s testimony regarding her allegations of her being a victim of a serious sexual assault by Judge Kavanaugh and his friend Mark Judge during their high school years.

Also, Judge Kavanaugh referred often to his training by the Jesuit priests during his high school years at Georgetown Prep.  But now the Jesuit American Magazine has officially  withdrawn its endorsement.

On September 27, 2018, Karoli Kuns of the Crooks and Liars blog penned the following report, American Bar Association Calls For Halt To Kavanaugh Confirmation

In a strongly worded letter obtained by CNN Thursday, the organization said it is making the extraordinary request “because of the ABA’s respect for the rule of law and due process under law,” siding with concerns voiced by Senate Democrats since Christine Blasey Ford’s decades-old allegations became public.

“The basic principles that underscore the Senate’s constitutional duty of advice and consent on federal judicial nominees require nothing less than a careful examination of the accusations and facts by the FBI,” said Robert Carlson, president of the organization, in a Thursday night letter addressed to Senate Judiciary Chairman Chuck Grassley and ranking Democrat Dianne Feinstein.

“Each appointment to our nation’s Highest Court (as with all others) is simply too important to rush to a vote,” Carlson wrote. “Deciding to proceed without conducting additional investigation would not only have a lasting impact on the Senate’s reputation, but it will also negatively affect the great trust necessary for the American people to have in the Supreme Court.”

“During his testimony Thursday, Kavanaugh touted his rating with the ABA as evidence of his qualification to sit on the nation’s highest court for the rest of his life. He claimed his ABA rating proved he had been thoroughly vetted.”

“The other qualification Kavanaugh cited was his Jesuit education and background. After his testimony Thursday, Jesuit American Magazine withdrew their endorsement, calling for his nomination to be withdrawn for the good of the country.”

“The hearings and the committee’s deliberations are now also a bellwether of the way the country treats women when their reports of harassment, assault and abuse threaten to derail the careers of powerful men,” the magazine’s editors wrote.”

It’s time for all decent folks to make the following contacts: