During the past seasons of the Saturday Night Live shows, major Hollywood actors have played starring roles like Alec Baldwin as President Trump, Scarlett Johansson as Ivanka Trump, Ben Stiller as Michael Cohen and Robert De Niro as Robert Mueller.

This 2018- 2019 premiere was no exception as Matt Damon played the part of the US Supreme Court nominee Judge Brett Kavanaugh as he delivered his testimony and answered questions on 9/27/18 at the US Senate Judiciary Committee .

“For its first opening sketch, “S.N.L.” brought in Matt Damon to play Judge Brett M. Kavanaugh in a recreation of Thursday’s contentious testimonybefore the Senate Judiciary Committee. Damon portrayed Kavanaugh as defiant, opening his remarks by saying: “I’m going to start at an 11. I’m going to take it to about a 15 real quick.” He was maudlin, breaking into tears whenever mentioning his former classmates and his notorious calendar, and constantly swigging from glasses of water.”

In character, Damon described himself as an optimist — “a keg-is-half-full kind of guy” — but also as someone who would fight for his nomination: “I don’t know the meaning of the word ‘stop,’” he said. “To quote my hero, Clint Eastwood’s character in ‘Gran Torino,’ ‘Get the hell off my lawn.’”

Several full-time “S.N.L.” cast members played United States senators in the sketch, including Cecily Strong as Dianne Feinstein, Alex Moffat as Chuck Grassley, Beck Bennett as Orrin Hatch and Kate McKinnon as Lindsey Graham. Rachel Dratch, the “S.N.L.” alumna, also made a cameo as Senator Amy Klobuchar, to recreate a testy exchange between her and Kavanaugh. When she asked Damon about his drinking habits, he fired back: “Look, I like beer. O.K.? I like beer. Boys like beer. Girls like beer. I like beer. I like beer.”

She later asked, “Did you ever drink too many beers?”

He answered: “You mean was I cool? Yeah.” 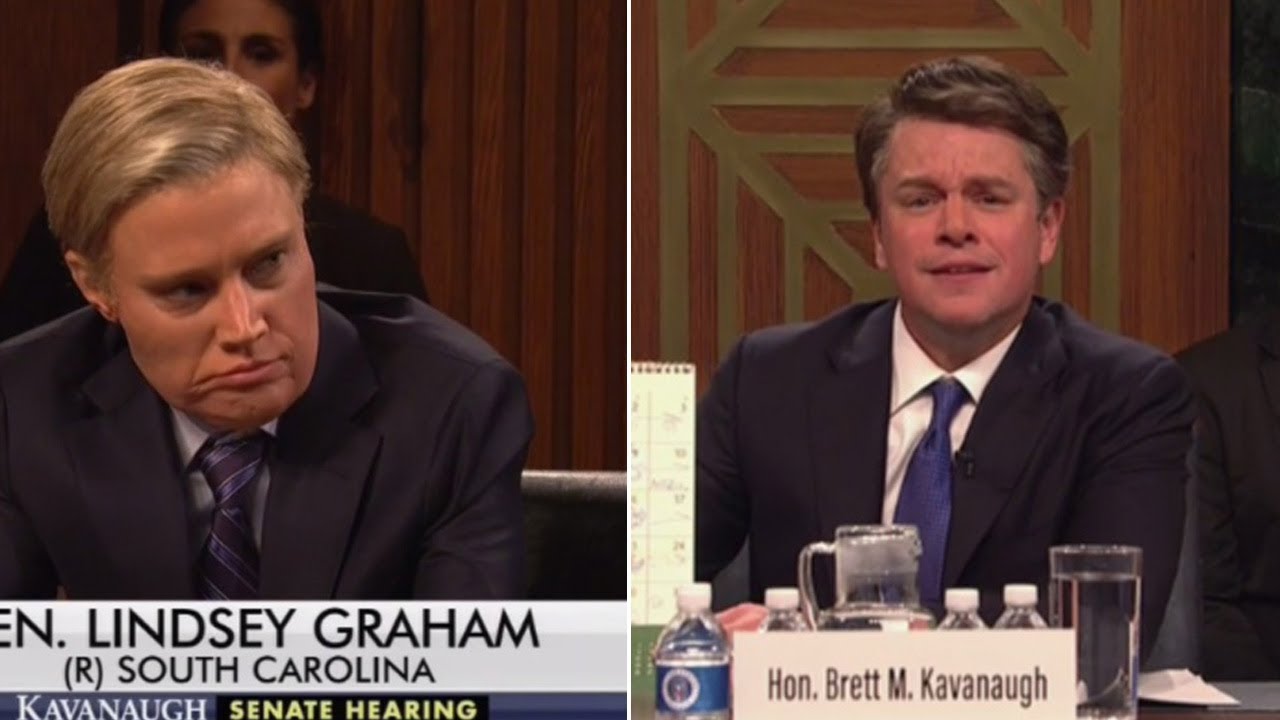 Still, the sketch was largely a tour de force for Damon, who ended it by saying: “Am I angry? You’re damn right. But if you think I’m angry now, you just wait till I get on that Supreme Court, ’cause then you’re all going to pay.” And then he shotgunned a can of water.

(For historical reference, here’s how “S.N.L.” lampooned the 1991 confirmation hearings of Justice Clarence Thomas, in an opening sketch that included Tim Meadows as Thomas, Kevin Nealon as Joe Biden, Phil Hartman as Edward M. Kennedy and Dana Carvey as Strom Thurmond. The sketch, which focuses on the prurient interests of the judiciary committee, also features Ellen Cleghorne as Anita Hill. She has one line of dialogue: “Thank you, Senator.”)