While the US has been kissing up to Saudi Arabia despite its ample documented  human rights’ abuses as in murdering civilians in Yemen and in its habitual jailing/ executing of female dissidents, Canada’s Prime Minister Justin Trudeau has been pushing back even though Saudi Arabia has threatened Canadians with financial repercussions.

Where has the USA been in this firestorm between Canada and Saudi Arabia. It has been MIA.

“A dispute between Canada and Saudi Arabia that started with a tweet escalated to an all-out slanging match that has all but severed relations between the two countries entirely.”

“Meanwhile, Canada has pledged to hold its ground. As the spat cooled, news Saudi Arabia is to execute a female activist for the first time has brought the county’s conflict into the spotlight once again.”

Scroll down for a full timeline explaining how the dispute has snowballed into a full-blown crisis.

“Maalouf said in the statement that both women had been “repeatedly targeted, harassed, and placed under travel bans for their human rights activism.”

“One of these women was Saudi activist Samar Badawi, the sister of Raif Badawi, who has been detained since 2012 for “insulting Islam.” Raif Bawadi’s wife and children were made Canadian citizens this year.”

August 2: Chrystia Freeland, Canada’s foreign minister, tweeted that she was “very alarmed” to learn of the arrest and that Canada “stands together with the Badawi family.”

Very alarmed to learn that Samar Badawi, Raif Badawi’s sister, has been imprisoned in Saudi Arabia. Canada stands together with the Badawi family in this difficult time, and we continue to strongly call for the release of both Raif and Samar Badawi.

August 3: Canada’s foreign ministry weighed in, writing on Twitter that Saudi Arabia should “immediately release” Badawi and “all other peaceful #humanrights activists.”

Canada is gravely concerned about additional arrests of civil society and women’s rights activists in #SaudiArabia, including Samar Badawi. We urge the Saudi authorities to immediately release them and all other peaceful #humanrights activists.

The most dramatic was this one, in which Saudi Arabia demanded that the Canadian ambassador leave within 24 hours.

#Statement | We consider the Canadian ambassador to the Kingdom of Saudi Arabia persona non grata and order him to leave within the next 24 hours.

Twitter Ads
The same day, Saudi Arabia also announced that it was suspending “all new trade and investment transactions” with Canada.

August 6: Tensions rocketed when a Saudi account, @Infographic_ksa, posted an image which seemed to be threatening Canada with a 9/11-style attack. 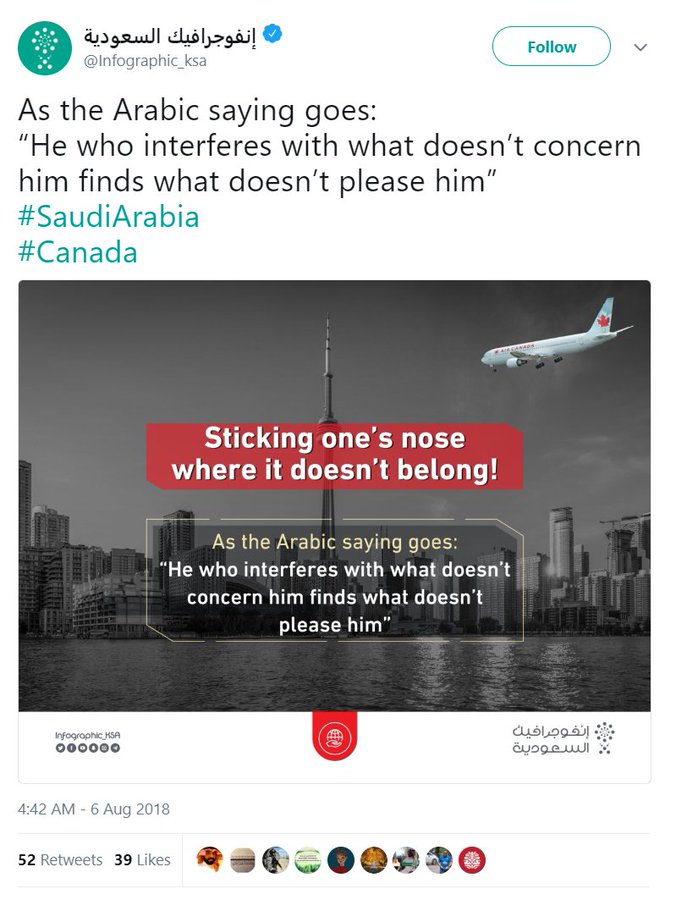 Now deleted, here a screenshot of the threatening Saudi “infographic” featuring an airliner headed for the Toronto skyline.

Twitter Ads
“The majority of the 9/11 hijackers were Saudi citizens.”

“After a backlash online, the account pulled the tweet, which it said had been misunderstood. @ksa_infographic appears to have a close relationship with the Saudi government’s media ministry, though the specifics are not clear.”

August 7: Saudi Arabia’s state airline, Saudia, said on Twitter that it was suspending all flights inbound and outbound flights to Toronto from August 13. 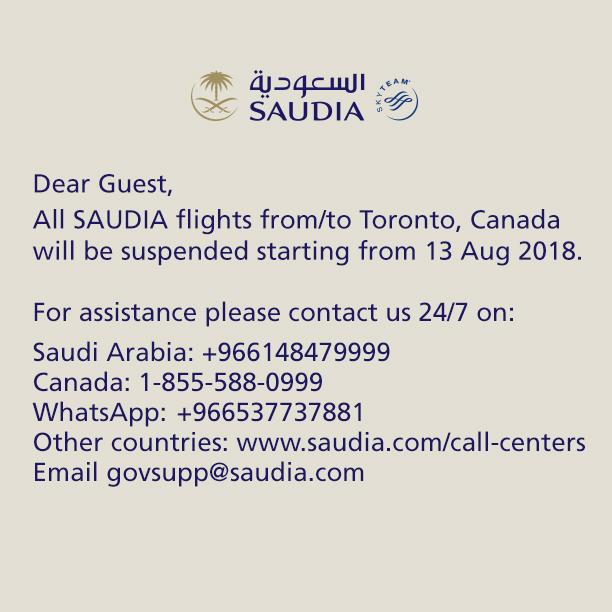 Canadian newspaper The Globe and Mail said Saudi Arabia was planning to withdraw all Saudi students it has been sponsoring at Canadian universities, colleges, and schools — more than 15,000 people.

“Students were left scrambling to sell their belongings before having to leave the country — including cars and furniture.”

Source: The Globe and Mail.

Also on August 7, the Reuters news agency reported that Canada was about to ask allies including the UAE and UK for help. Neither country has done much to support the Canadians.

The US refused to back Canada in the dispute, saying both sides needed to “diplomatically resolve this together.”

“Both sides need to diplomatically resolve this together. We can’t do it for them, they need to resolve it together,” Nauert said.”

Also on August 8, Saudi Arabia said it was stopping all medical treatment programs in Canada and was transferring all Saudi patients to other hospitals outside of Canada.

August 9: Thursday brought the first sign of a limit to the dispute: according to the Saudi energy minister, the dispute will not affect oil exports to Canada. Khalid Al-Falih cited a long-standing policy that the oil trade isn’t affected by political concerns.

See the rest of the story at Business Insider