There’s been a major leak regarding the case against Saudi Arabia for the murder of a Saud national who was a permanent US resident and journalist for the Washington Post. Jamal Khashoggi was brutally killed after he entered the Saudi consulate in Istanbul, Turkey on 10/2/18, never to be seen again.

It appears that Saudi Arabia after the initial denials, were starting to float the explanation that there were rogue Saudi operatives who murdered Mr. Khashoggi, in an interrogation/ kidnapping attempt gone bad.

This tale being disseminated by the US president has been received with skepticism, as the Turks have shared that there was a team of 15 Saudis sent to the consulate to wait for Mr. Khashoggi to arrive at his appointed time. The team just happened to include an autopsy specialist who managed to travel with a bone saw.

But there is new data being published by the New York Times, that blows that contrived excuse of a rogue operation to smithereens. It seems that some of the culprits involved in this caper, have been frequent traveling buddies of the Saudi Crown Prince Mohammed bin Salman (MBS).

“One of the suspects identified by Turkey in the disappearance of the Saudi dissident Jamal Khashoggi was a frequent companion of Crown Prince Mohammed bin Salman — seen disembarking from airplanes with him in Paris and Madrid and photographed standing guard during his visits this year to Houston, Boston and the United Nations.”

“Three others are linked by witnesses and other records to the Saudi crown prince’s security detail.”

“A fifth is a forensic doctor who holds senior positions in the Saudi Interior Ministry and medical establishment, a figure of such stature that he could be directed only by a high-ranking Saudi authority.”

“If, as the Turkish authorities say, these men were present at the Saudi Consulate in Istanbul where Mr. Khashoggi disappeared on Oct. 2, they might provide a direct link between what happened and Prince Mohammed. That would undercut any suggestion that Mr. Khashoggi died in a rogue operation unsanctioned by the crown prince. Their connection to him could also make it more difficult for the White House and Congress to accept such an explanation.”

“How much blame for Mr. Khashoggi’s disappearance or death settles on the 33-year-old crown prince has become a decisive factor in his standing in the eyes of the West and within the royal family.”

“The prince has presented himself as a reformer intent on opening up the kingdom’s economy and culture, and has used that image to try to influence White House policy in the region and to woo Western investors to help diversify the Saudi economy.”

“But the international revulsion at the reported assassination and mutilation of a single newspaper columnist — Mr. Khashoggi, who wrote for The Washington Post — has already sullied that image far more than previous missteps by the crown prince, from miring his country in a catastrophic war in Yemen to kidnapping the prime minister of Lebanon.”

“But in the last few days, as major American businesses and media companies have  withdrawn from a marquee investment conference in Riyadh, the United States, Turkey and Saudi Arabia appear to have been searching for a face-saving way out.”

“The royal court was expected to acknowledge that Mr. Khashoggi was killed in the consulate, and to blame a rogue operation conducted without the direct knowledge of the crown prince, according to a person familiar with the Saudi plans. The Saudis, this person said, will hold accountable an intelligence official who received approval from the crown prince to capture and interrogate Mr. Khashoggi but ended up killing him instead.”

“On Monday, after speaking with King Salman, President Trump floated the possibility that Mr. Khashoggi was the victim of “rogue killers.” And on Tuesday, he came to the defense of Prince Mohammed, telling The Associated Press that the presumption of a Saudi plot was an example of “you’re guilty until proven innocent.” 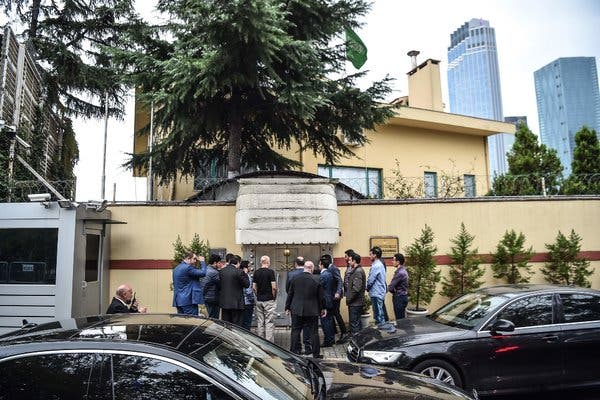 “The suspects’ positions in the Saudi government and the links of several to the crown prince could make it more difficult to absolve him of responsibility. And the presence of a forensic doctor who specializes in autopsies suggests the operation may have had a lethal intent from the start.”

“Turkish officials have said they possess evidence that a team of 15 Saudi agents flew into Istanbul on Oct. 2, assassinated Mr. Khashoggi, dismembered his body with a bone saw they had brought for the purpose, and flew out the same day. They said Mr. Khashoggi was killed within two hours of his arrival at the consulate.”

“Turkish officials, speaking on the condition of anonymity to discuss confidential intelligence, have said that all 15 suspects are Saudi security officers, intelligence agents or government employees.”

“Records show that two private jets chartered by a Saudi company with close ties to the Saudi crown prince and Interior Ministry arrived and left Istanbul on the day of Mr. Khashoggi’s disappearance. Turkish officials have said some of the 15 suspects arrived and left on those jets”.

“The New York Times has confirmed independently that at least nine of the 15 worked for the Saudi security services, military or other government ministries.”

“Mr. Mutreb was photographed emerging from airplanes with Prince Mohammed on recent trips to Madrid and Paris. He was also photographed in Houston, Boston and the United Nations during the crown prince’s visits there, often glowering as he surveyed a crowd.”

“A French professional who has worked with the Saudi royal family identified a second suspect, Abdulaziz Mohammed al-Hawsawi, as a member of the security team that travels with the crown prince.” 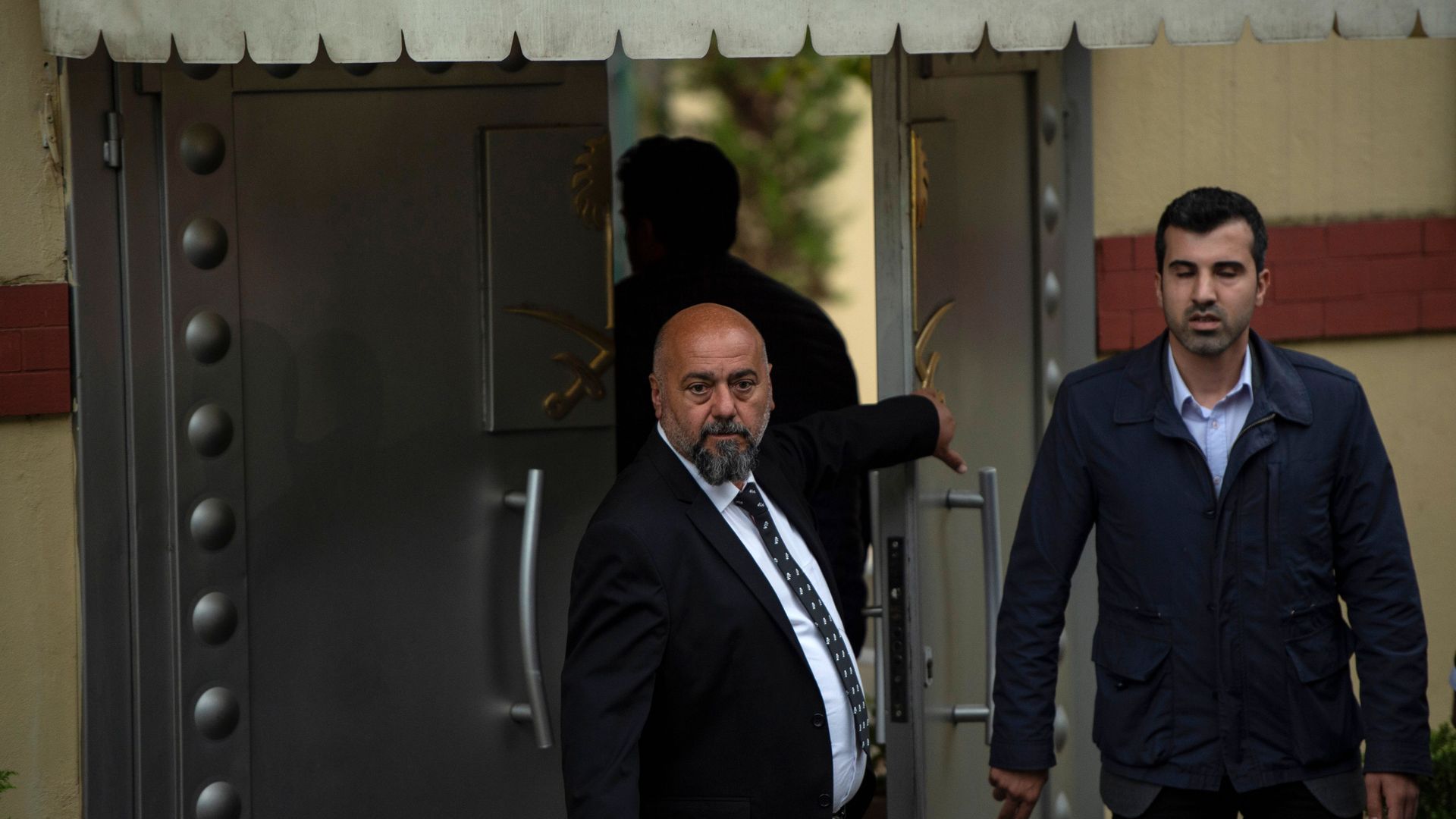 “A Saudi news outlet reported that someone with the same name as a third suspect, Thaar Ghaleb al-Harbi, was promoted last year to the rank of lieutenant in the Saudi royal guard for bravery in the defense of Prince Mohammed’s palace in Jeddah.”

“A fourth suspect traveled with a passport bearing the name of another member of the royal guard, Muhammed Saad Alzahrani. A search of the name in Menom3ay, an app popular in Saudi Arabia that allows users to see the names other users have associated with certain phone numbers, identified him as a member of the royal guard. A guard wearing a name tag with that name appears in a video from 2017 standing next to Prince Mohammed.”

“Members of the royal guard or aides who traveled with the crown prince might have been recruited for an expedition to capture or interrogate Mr. Khashoggi, perhaps led by a senior intelligence official. But the presence among the suspects of an autopsy expert, Dr. Salah al-Tubaigy, suggests that killing might have been part of the original plan.”

“Dr. Tubaigy, who maintained a presence on several social media platforms, identified himself on his Twitter account as the head of the Saudi Scientific Council of Forensics and held lofty positions in the kingdom’s premier medical school as well as in its Interior Ministry. He studied at the University of Glasgow and in 2015 he spent three months in Australia as a visiting forensic pathologist at the Victorian Institute of Forensic Medicine. His published writings include works on dissection and mobile autopsies.”

“Although there is no public record of a relationship between him and the royal court, such a senior figure in the Saudi medical establishment was unlikely to join a rogue expedition.”

“Dr. Tubaigy, whose name first appeared among reports of the suspects several days ago, has not publicly addressed the allegations. None of the suspects could be reached for comment.”