aside Dear Americans, Get Real! Your Stagnant Wages / Lost Jobs Are Due To Corporate Greed/ Not Others

I am disgusted that the republican President Donald Trump and his crony GOP sycophants keep disseminating lies to hard working Americans, that it is the the other (fill in the blank from immigrants to any minority group) who are taking their jobs, when the truth is that their woes are due to the same guys selling them this BS, outright lies.

Some of the causes for over 3 decades of stagnant wages, have to do with more US goods being manufactured in other countries where the hourly pay for workers is much less; corporations developing a greater reliance in technology; and there are changes in the culture, like a greater usage by utility companies of renewable sources of energy versus fossil fuel. But guess who are making these decisions. They are the corporations executives, not the other bogeyman.

It used to be that after WWII until 1973, corporation executives shared the spoils of increased productivity, revenues, profits with their workers.

But after 1973, corporate productivity increased by 77% but workers’ pay increased by only 12.4%. This is due to CORPORATE GREED/ NOT THE OTHERS! 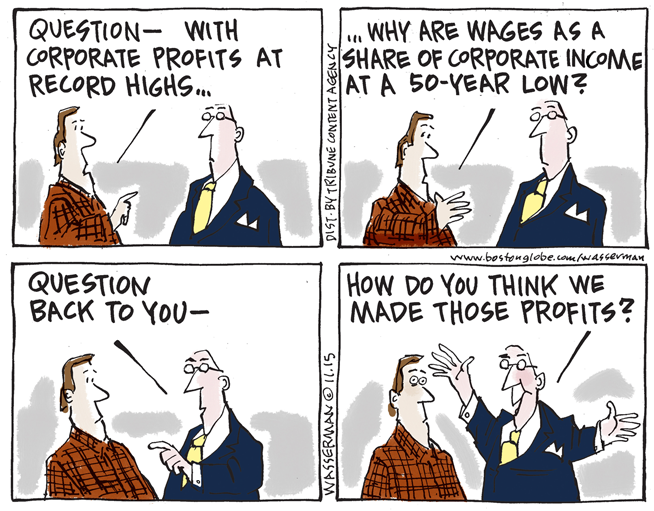 Notes: Data are for compensation (wages and benefits) of production/nonsupervisory workers in the private sector and net productivity of the total economy. “Net productivity” is the growth of output of goods and services less depreciation per hour worked.

Many corporate executives joined up with Koch backed organizations like ALEC, the  American Legislative Exchange Council which started in 1973 where one of their major goals was to destroy the power of worker unions in the private sector. Currently, they would love to break up the public sector unions made up of folks like teachers, fire fighters, police officers, etc.

As per a May 18, 2012 Mother Jones article by Paul Abowd, “Much of the recent controversy surrounding the American Legislative Exchange Council has focused upon the way it brings together its key members, major corporations and state legislators, to craft legislation behind closed doors. Largely unnoticed has been the influence wielded by a third group of ALEC members: think tanks.” 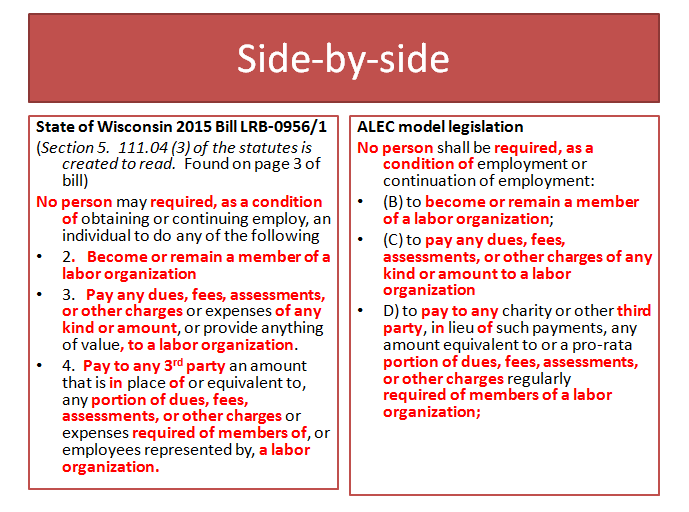 “The Mackinac Center sent labor policy analyst Paul Kersey to introduce three more bills targeting unions. One of those model bills is already Michigan law, requiring public-sector unions to make public audits of their financial activities. Another Mackinac proposal would require public-sector union members to vote on their union membership every three to five years, and a third would make it easier for public and private employees to decertify their unions.” 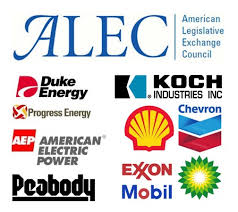 “Members of the ALEC’s commerce task force confirmed that the five union bills were approved in Charlotte.”

“The think tanks’ bills will become model legislation if the group’s board of directors does not initiate a formal review of the bills within 30 days. ALEC will then likely encourage its member legislators to introduce the model bills back in their home states. Since its founding in 1973, ALEC has successfully pushed hundreds of laws at the state level. According to the its website, every year legislators introduce nearly 1,000 bills based on ALEC model legislation, and 20 percent of them become law.”

Dozens of state-based think tanks, many of them part of a Heritage Foundation-affiliated umbrella group called the State Policy Network, have long held sway within ALEC. “A very large proportion of the bills are sponsored by these think tanks,” says Nick Surgey, a legal associate at Common Cause, which claims ALEC is actually a lobbying group and is violating its nonprofit status. “But behind that next layer is another set of unknowns about who is pushing the think tanks’ agenda.”

“Some, though not all, of Goldwater and Mackinac’s other financial supporters have been revealed. They have been supported with grants from the Charles Koch Charitable Foundation, the Walton Family Foundation, and the State Policy Network—groups that also fund ALEC. Together, Goldwater and Mackinac draw money from 12 of the same conservative foundations, according to analysis by Media Matters Action Network. In 2010, the last year for which information is available, the think tanks had budgets of approximately $3.5 million each.”

To add salt to these wounds. the Republican Party legislators have very recently openly advertised that they have plans to cut back on entitlement programs like social security, Medicare, Medicaid that workers have paid towards out of their paychecks for most of their working lives.

While the republican President Donald Trump and his corporate crony buddies are selling the American peoples on the concept that those foreigners (or the others which could be any minority group) are taking away jobs, look at what they are doing:

Even though the republican President Donald J. Trump has been doing his level best to decry the fact that foreigners are taking away the jobs from Americans, he has continued to this date to hire mostly foreign help via H-2B visas (99%) to staff temporary positions (seasonal) at his many resorts, including at Mar-a-Lago.

While he rails against US corporations going overseas to manufacture goods, the following represents his purchasing practices for his own hotel businesses. 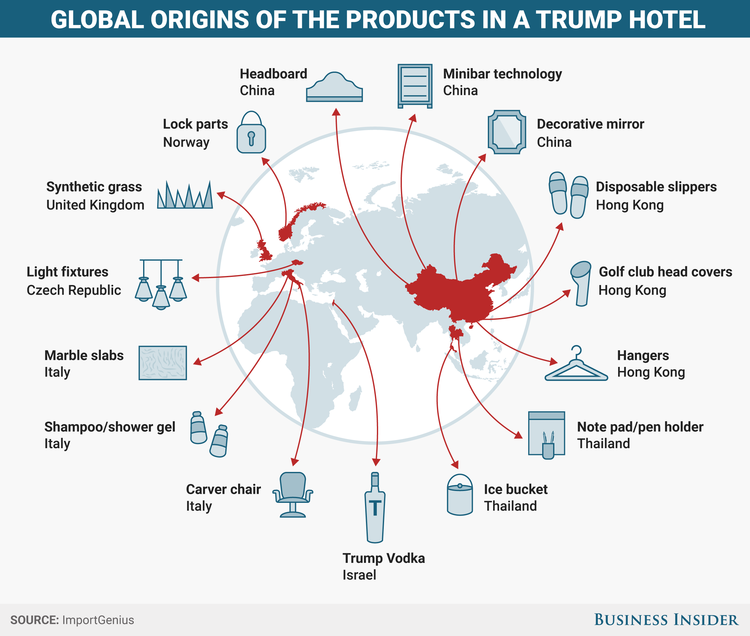 Many of these huge profitable corporations like International Paper and General Electric have been paying -0- dollars towards the IRS federal taxes.

Here are Some Key Findings from a 3/9/17 ITEP study that evaluated profitable companies only for an eight year period  from 2008-2015:

In conclusion, blaming others won’t change our less than rosy economic conditions. Instead if we all join together, our numbers create a force to be reckoned with that gives us average Joe workers tremendous power. This is what those on top would do just about anything to prevent. We do not begrudge the success of the rich but they have to learn that we cannot be ignored and easily deflected into blaming our fellow brothers and sisters who are traveling on the same boat, paddling upstream and getting nowhere Corporation executives are going to have to do their part to lift up the middle class/ poor by sharing their companies’ spoils. 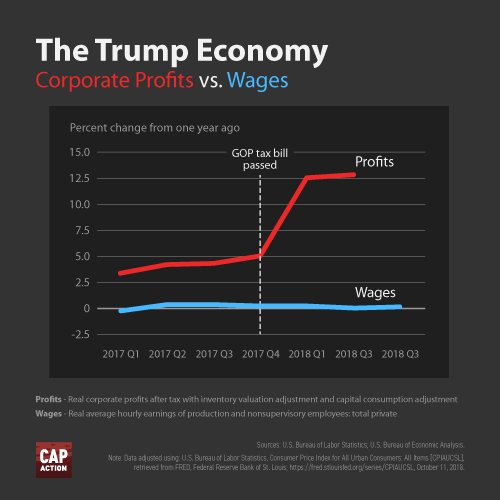 We don’t have to sit back while those in the White House and the US Congress pass bills that neglect the quest for a better quality of life by average every day workers while mostly rewarding the very rich individuals and large corporations with the major 2017 tax cuts bill, while some like the republican Senator Chuck Grassley, of Utah blames us for not being rich.

This November 2018, back all Democratic candidates as they are the ones truly championing the causes like the protection of worker unions of average American workers.