To Win The Mid-Term Nov. 2018 Elections, President Is Lying With Just About Everything He Says

In advance of the US November 2018 mid-term elections, the republican President Donald Trump lying has been off the charts. Just about every word he states is a falsehood, a bull horn to stoke the emotions of those in his base, those with racist leanings, prone to fear of immigrants and who want to believe every word he says. He is working to to motivate his base to get out the vote and he is having success with this tactic.

I’m the curator of the #ToddlerinChief thread on Twitter, a log of the times when a political ally of Donald Trump describes him like one would describe a small child. There are more than 535 examples in this thread since April 2017. But I have noticed a decided slowdown in the number of entries in recent weeks. There have been only 12 entries in October; Trump has averaged close to 28 entries since May 2017. Trust me when I say that has been a slow month.

Is there an explanation for this? Has Trump actually grown into the presidency?

Not exactly. As the midterm elections approach, and as Trump has devoted more and more of his time on the campaign hustings, he appears to have switched from general toddler-like behaviors to one specific toddler-like trait: lying.

Calling the president of the United States a liar used to be no small thing, but Trump’s record for lies, falsehoods and general untruths is genuinely impressive. Still, even the folks who fact-check Trump for a living have been surprised at just how bald-faced his recent lies have been.

I’ve fact-checked every word Trump has uttered for two full years. This is one of his most dishonest weeks in political life. He’s lying about so many different things at once, and in big ways — not exaggerating or stretching, completely making stuff up. https://twitter.com/atrupar/status/1054462779409793025 …

Trump defends his preposterous lie about anti-immigrant riots taking place in California (there have been no such riots).

“Take a look, they want to get out of sanctuary cities… it is rioting in some cases.” (He doesn’t specify where.) 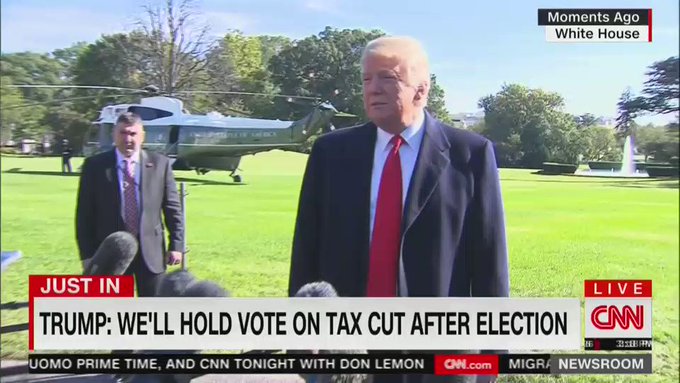 The Toronto Star’s Daniel Dale is not just tweeting about this. Here is Dale’s latest story on Trump’s repeated lies:

U.S. President Donald Trump made a brief attempt to campaign on his record of accomplishments but, as the November congressional elections approach, he has traded that shiny new positivity for the well-worn tactic that helped him win the presidency in 2016: a blizzard of fear-mongering and lies, many of them about darker-skinned foreigners.

Trump has been a serial liar about just about everything for his entire tenure in office, but he has rarely before deployed so many complete fabrications about so many important subjects at the same time.

In the past 24 hours alone, Trump has told multiple whoppers. Let’s start with the darkest one, about darker-skinned foreigners, shall we?

Sadly, it looks like Mexico’s Police and Military are unable to stop the Caravan heading to the Southern Border of the United States. Criminals and unknown Middle Easterners are mixed in. I have alerted Border Patrol and Military that this is a National Emergy. Must change laws!

Twitter
Ordinarily, when presidents make accusations like this one, they have, you know, some kind of evidence to back it up. Trump, however, only has Pete Hegseth. The Daily Beast’s Pilar Melendez reports that Trump latched onto the claim only after Hegseth said it on “Fox & Friends.” Follow-up reporting by the Los Angeles Times’s Kate Linthicum,ABC’s Matt Gutmanand BuzzFeed’s Karla Zabludovsky reporting with the caravan, and by Fox News’s Shepard Smith found no evidence to support Trump’s bogus claims. Trump is also lying about a new tax cut. Congress has adjourned until after the midterm elections, which means it cannot pass new legislation. This has not deterred Trump from claiming it will happen, however. Politico’s Nancy Cook and Ben White clean up Trump’s lies on taxes:

In recent days President Donald Trump has twice promised a new “major tax cut” ahead of the November midterm elections, mystifying White House officials, congressional leaders, and tax wonks around town who mostly have no idea what he’s talking about….

White House officials spent the day trying to decode what Trump meant because no one knew the substance of any such tax cut, or had seen any policy proposal related to it. Aides were left wondering what Trump had read in newspaper clippings, or seen on Twitter, to inspire this grand promise from his rally podium.

One senior administration official on Sunday night had not even heard about the president’s tax cut remark on Saturday in Nevada and said they had no idea what he was talking about. “I guess I’ll hear about it when I get to work on Monday,” the official said.

Trump said that House Speaker Paul Ryan was involved in crafting the plan. But Ryan’s office shed no light, referring questions back to the White House. “What is truly bizarre about this Trump lie is that he is not talking about the signature legislative accomplishment of his first two years: the tax cut he did sign into law. Why talk about fake new tax cuts when there are honest-to-goodness actual tax cuts?”

“It is probably because those actual tax cuts have been very unpopular. As Politico’s Brian Faler notes, that tax cut has proven to be a albatross for GOP candidates this fall: “With polls showing Americans are more likely to disapprove of the tax law than to approve of it, GOP candidates have been changing the subject to other issues like immigration and health care. Some of the lawmakers who wrote the Tax Cuts and Jobs Act are even struggling to hang onto their seats.”

The motivation for these lies is pretty obvious: Trump wants Republicans to do well in the midterms. As my Post colleagues Ashley Parker, Philip Rucker and Josh Dawsey report, Trump is trying to reprise his 2016 campaign style again:

Trump’s messaging — on display in his regular campaign rallies, tweets and press statements — largely avoids much talk of his achievements and instead offers an apocalyptic vision of the country, which he warns will only get worse if Democrats retake control of Congress….

The approach in many ways seeks to re-create the 2016 playbook that lifted Trump to the presidency, in which cultural flash points and controversies, like the specter of mass illegal migration, helped energize Trump’s supporters. The president believes his best contrast with Democrats is on immigration and is looking for a way to keep the issue in the news until the midterms, advisers said.

Stephen Miller, Trump’s senior policy adviser who has long espoused hard-line immigration policies, is one of the chief authors of Trump’s rally messages, though the president often goes further than his prepared remarks.

We will see if this gambit works come Nov. 6. It very well might. But it is worth noting that so far, even the Fox demographic seems pretty chill about the caravan.

I write about politics for a living. I am not naive about the ways in which politicians shape, adjust or spin the truth. But it is overly cynical to believe that they lie all the time. Most of them do care about the truth, which is one reason that, when they lie, it can look so bad.

It is ironic that a president whose base believes him to be a bold truth-teller is far and away the biggest liar to ever occupy the Oval Office. It is scary to think that in writing this column, I may be merely spreading Trump’s lies to those readers too lazy to read all the way through. Still, the combination of the president’s outrageous lies and the position he occupies in the federal government cannot be ignored.

The president is a liar.