I am convinced that the republican President Donald Trump’s placement of the current US Department of Justice’s Acting Attorney General Matthew Whitaker to replace the fired Attorney General Jeff Sessions, is unconstitutional.

The Appointments Clause of the Constitution, Article II, Section 2, Clause 2. states in a nutshell, any principle office holder, defined as someone who reports directly to the US president, cannot be replaced by any party who has not undergone the confirmation process by the US Senate.  Mr. Whitaker has not been subject to this confirmation process.

There are other statutes out there regarding succession if a principle is fired, but the US Constitutions trumps any of those rules.

Of course, we all know that Mr. Whitaker has been appointed by the president to protect himself from the negative consequences of the FBI’s Trump-Russia probe headed by the Special Counsel Robert Mueller III.

But, President Trump is probably too late in taking action to protect himself…

On November 9, 2018, Benjamin Wittes, the editor of the Lawfare blog, for the Atlantic penned the following analysis, It’s Probably Too Late to Stop Mueller”

“At the end of last month, with the midterms looming, I gave a talk before a small private audience in California in which I argued for optimism because—among other things—the moment for firing Robert Mueller had passed.”

“Here are 10 reasons to think that Whitaker may have less capacity to foil Mueller than the current moment—and his formal powers—may suggest.”

“First, Mueller has spread the wealth around. The normal critique of special-counsel investigations is that they hoard jurisdiction, endlessly expand, and become personal roving inquests into their political subjects’ lives. The opposite is the case with Mueller. He has not merely referred to other Justice Department components matters at the margins of his investigation, such as the Michael Cohen situation in New York. He has also let other components handle matters involving core questions of Russian interference in the U.S. elections, such as the Maria Butina and Elena Khusyaynova prosecutions. The result of this strategic step is not just that Mueller is relatively invulnerable to the charge of any kind of power grab or mission creep. It is also that firing him or reining him in only does so much. If Trump imagines these investigations as a cancer on his presidency, they are a cancer that has already metastasized.”

“Second, the investigation has already progressed very far. It is one thing to squelch an investigation in its crib. It’s another thing to squelch an investigation that has already collected important evidence and brought key cases. The effort to do so cannot take place invisibly, as a great many prosecutors and FBI agents will be aware of what is happening. None of them has to leak anything for that awareness to find its way to Capitol Hill, because the Hill is already aware of the problem and looking for signs. Mueller is by many accounts writing a report, a step that signals a completed investigation or a completed portion of an investigation. The effort to suppress that report could be politically galvanizing and, in its own way, as damaging for the administration as the contents of that report when they eventually become public.”

“Third, Mueller does not have to remain silent. Mueller has used silence as a powerful strategic instrument throughout his investigation. He has done this for a variety of reasons, and the silence has served him well. Among other things, it has given his voice, if and when he ever chooses to use it, enormous moral and political power. The day that Mueller holds a press conference or stands before cameras and declares that his investigation is facing interference from the Justice Department will be a very big day, perhaps a game-changing day. If the department suppresses his report, he has the capacity to, as James Comey did after his firing, testify before Congress about what happened. Mueller has not hoarded power or jurisdiction, but he has hoarded moral authority.”

“Fourth, the midterms matter—and they mean investigations. Squelching a high-profile, politically explosive investigation of the president is hard enough in this country under any circumstances. When the opposition party controls powerful congressional committees and is committed to oversight, it’s that much harder. The Democratic takeover of Congress means that key committees will be watching every move Whitaker and his successor make with respect to the investigation. It means subpoenas for any report they may try to suppress. It means an open and receptive forum for Mueller to testify should he have something to say. It means constant investigation. And it means that the threat of impeachment hangs over everything. This is a very big change, and Mueller is as aware of it as anyone. As a result of Democratic control of the House, he could, for example, write an unclassified summary of his report and conclusions with every expectation that major congressional committees would demand it and release it publicly. He could also, say, write an impeachment referral—if he thought he had evidence Congress needs to see—and dare Whitaker to prevent its transmission to Congress. If Whitaker were to do so, Mueller could resign and announce what happened and let Congress do the rest. Having Democrats in control of the House matters enormously.” 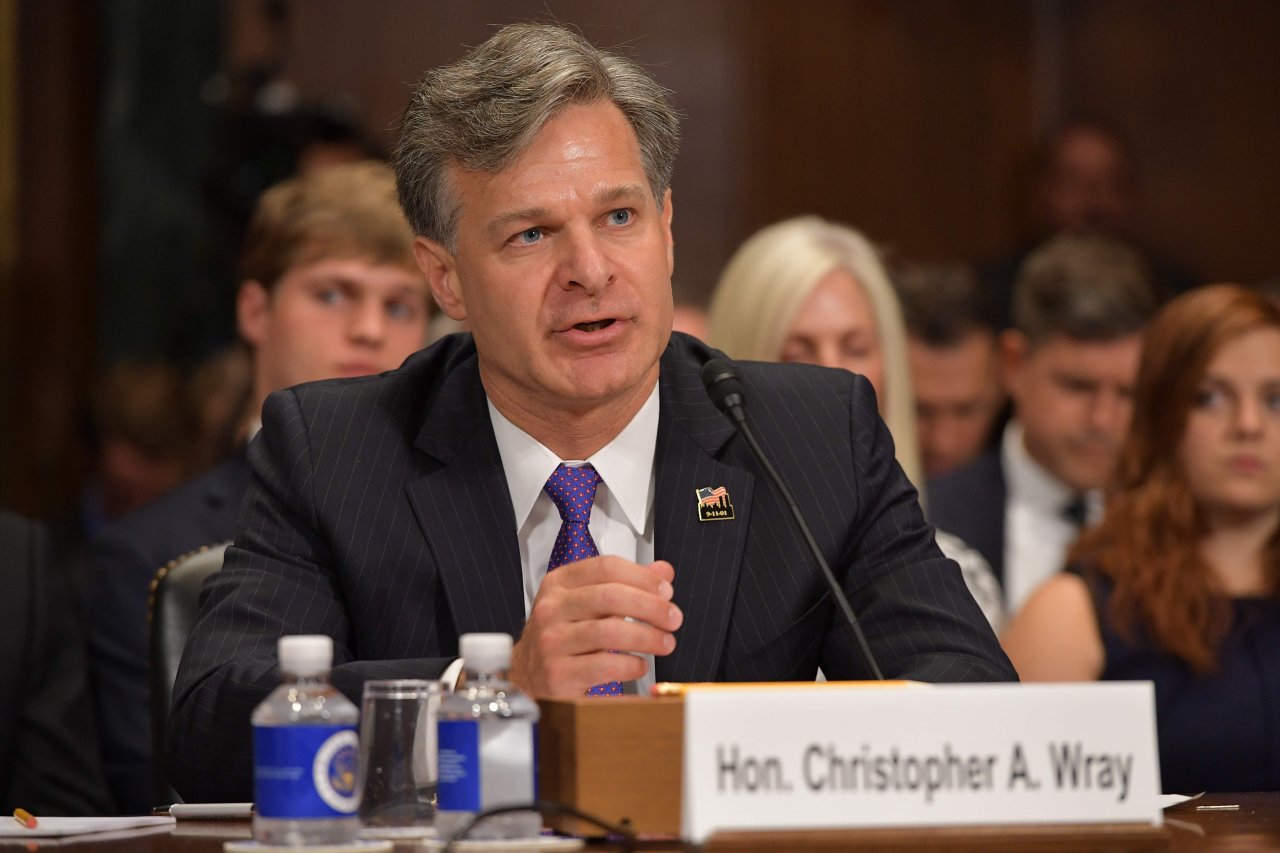 Fifth, the confirmation process for the attorney general still matters.Whitaker is ultimately a placeholder. He can do damage while in office, but ultimately the president is going to have to name an attorney general, and the Senate is going to have to confirm that person. That means 2 big things: Trump has to name someone who can win confirmation, and the nominee has to personally face the Senate Judiciary Committee. The midterms strengthened the president’s hand in the Senate, both by increasing the Republican caucus and as a consequence of the departure of Republicans such as Jeff Flake and Bob Corker, who might have been expected to take a stand against an unacceptable nominee. But there are still senators who might well draw some lines. And that has mattered in the past. The reason Chris Wray, and not someone wholly unacceptable for the role, is FBI director today is that confirmability required it. Moreover, the confirmation process offers a genuine and meaningful opportunity for senators to force a nominee publicly and under oath to commit himself or herself to supervising the investigation in a nonpolitical manner. These things matter. During Watergate, Elliot Richardson resigned as attorney general, rather than firing Archibald Cox, precisely because he had given the Senate his word that he would protect the special prosecutor.”

“Sixth, corrupting the Justice Department is harder than you think.Trump has tried very hard. He openly declares his ambition that the department’s function should be to protect him and prosecute his enemies. And yet the norms and traditions of the department have proved uncommonly robust and sticky and have frustrated him at every turn. Yes, cultures can be corrupted. And we should certainly worry that Whitaker comes into the department’s leadership in service of Trump’s declared goal of corrupting its culture. But don’t underestimate the difficulty of the project, particularly with Congress watching and journalists making the rounds every day. The culture has defended itself remarkably ably so far.”

“Seventh, senior Justice Department officials, both career and political, can draw lines. This point is closely related to the previous one, but also distinct. One indication that the system has held so far is that we have not seen mass resignations or resignations in protest over matters of principle. That will change if Whitaker or his successor moves against the investigation in a fashion that officials regard as unacceptable. Rosenstein, for example, has assiduously defended and protected the Mueller investigation, staking his personal credibility on the endeavor. Will he and Wray, who has to think about how the FBI rank and file will react to his sitting on his heels while a major FBI investigation is buried, really do nothing if Whitaker impedes Mueller? Even if they are inclined to passivity, the norms and expectations of the department will demand more of them, particularly if underlings threaten to resign if they do not act.” 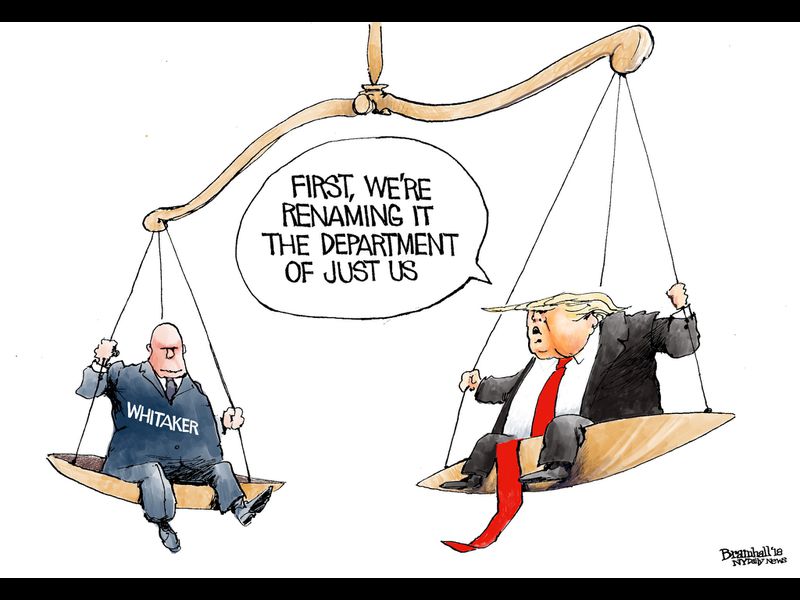 See: Adam Serwer: Trump will only get more dangerous.