Ukraine gained independence after the collapse of the Soviet Union in 1991, but Russia has never accepted this development because it looked upon Ukraine as a national security risk because of Ukraine’s pro western policies and because Russia needs its naval base for strategic reasons.

There is a 2003 treaty between Russia and Ukraine insuring that the Kerch Strait and the Sea of Azov are shared territorial waters.

In 2014, Ukrainian citizens ousted pro-Russian President Viktor Yanukovych who had failed to follow through on his campaign promises to take steps to have Ukraine be part of the EU European Union. (Paul Manafort managed his campaign)

This action in 2014 was followed by Russia invading illegally (without provocation) the Crimean peninsula which is part of Ukraine and then arbitrarily annexing this territory to Russia.

The year 2014 is when the NATO countries along with the US, imposed sanctions against Russia which its President Vladimir Putin has been trying to get lifted for years.

As per Wikipedia, “the G7 members cancelled the planned G8 summit that was to be held in June (2014) in the Russian city of Sochi, and suspended Russia′s membership of the group, due to Russia’s annexation of Crimea; nevertheless, they stopped short of outright permanent expulsion.” But Russia’s President Putin formally left the G8 in 2017.

In November 2018, Russia has escalated tensions with the use of force by Russia to seize Ukrainian vessels – with casualties. 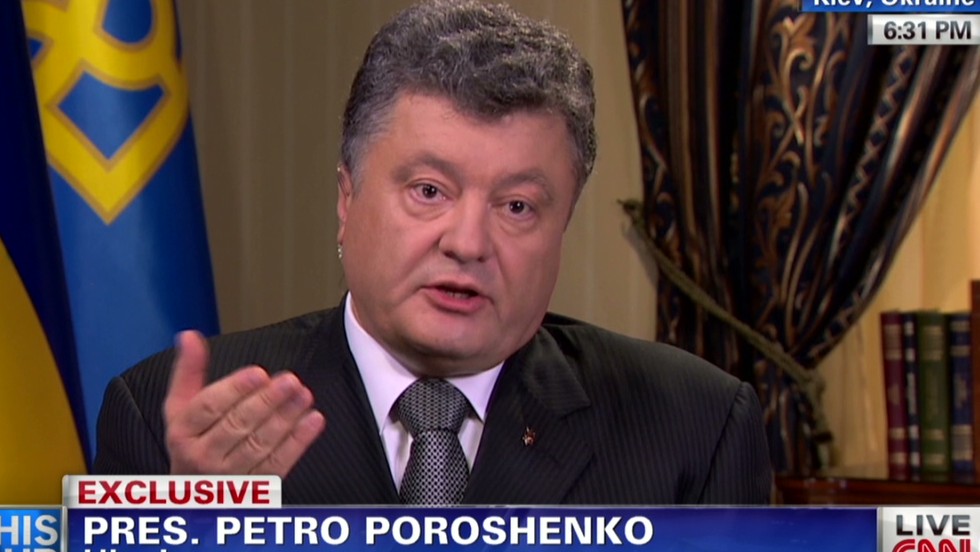 As per  Wikipedia, Richard Nathan Haass is an American diplomat. He has been president of the Council on Foreign Relations since July 2003, prior to which he was Director of Policy Planning for the United States Department of State and a close advisor to Secretary of State Colin Powell. 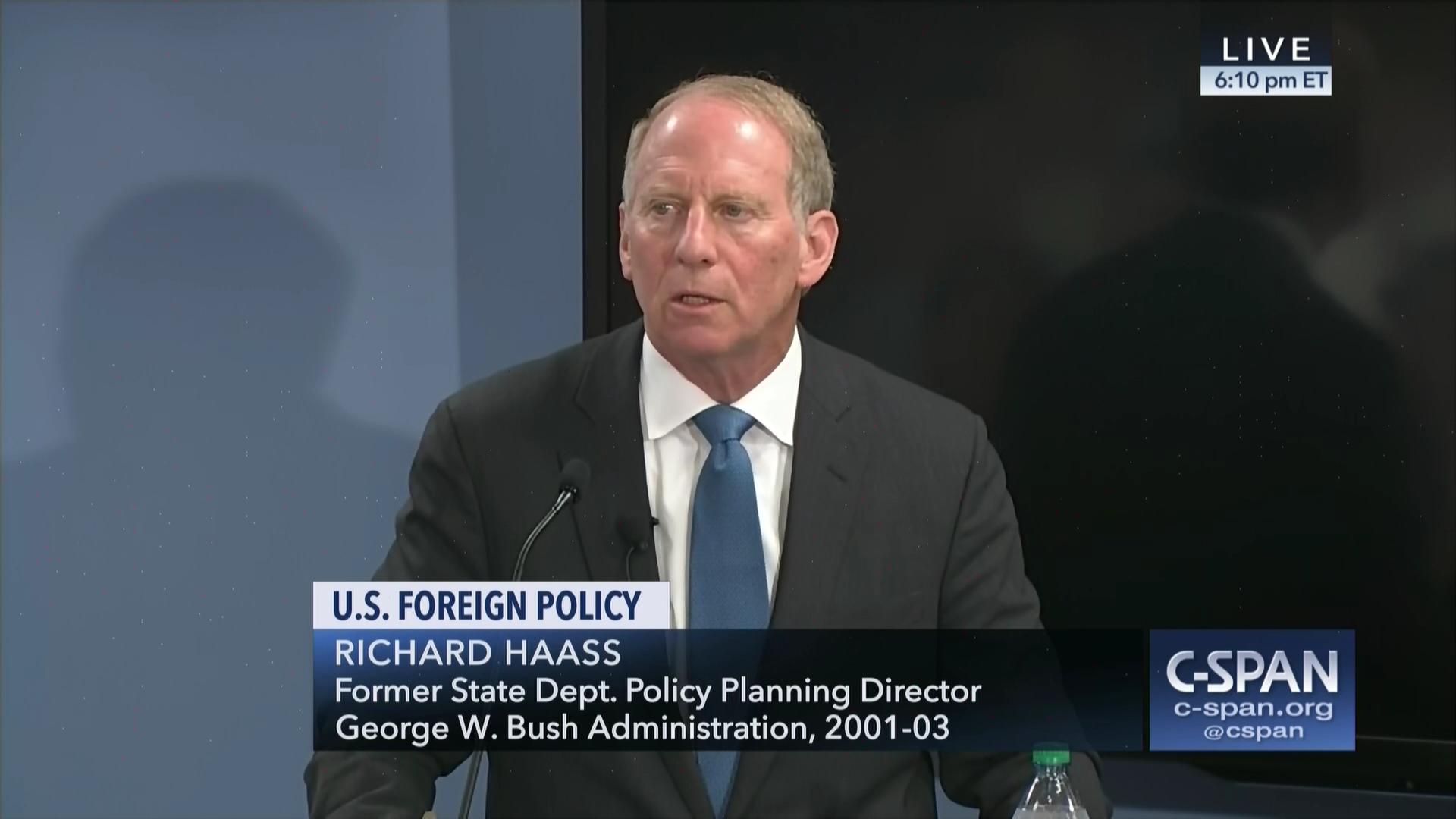 Let’s see if the republican President Trump follows the advice of Richard Haass, as any former US president would have done, or if he will continue to favor Russia by not taking any action.

This is why the review of the president and his family’s IRS tax returns by the new incoming Democratic congressional oversight committee chairs are so crucial. ‘We the people’ need answers to questions regarding President Trump’s frequent impulses of kowtowing to Russian interests, being based on his benefiting financially from Russian monies to where he ignores US national security interests.

As per a 11/25/18, BBC News report, “A tanker was placed under the Russian-built bridge that spans the narrow Kerch Strait – the only access to the sea.”

“Russia said the traffic was suspended for security reasons.”

“Meanwhile, a Russian FSB security service official was quoted by Ria Novosti news agency as saying that Ukraine had sent naval reinforcements to the area.”

“Russia earlier said the Ukrainian vessels – two small warships named as the Berdyansk and the Nikopol, and the tug – were trying “to create a conflict situation in this region” after they left Odessa.”

“The ships “illegally entered a temporarily closed area of Russian territorial waters”, the FSB reportedly said in a statement.”

“But Ukraine said it had informed the Russians of its plan to move its ships through the sea to Mariupol.”

“The navy statement said the Russian actions marked a breach of the UN Convention on the Law of the Sea.”

“In recent weeks, a Ukrainian vessel was escorted by Russian tugs under the bridge in the Kerch Strait without an incident.”

“Russia has fired on and seized 3 Ukrainian naval vessels off the Crimean Peninsula in a major escalation of tensions between the two countries.”

“Two gunboats and a tug were captured by Russian forces. A number of Ukrainian crew members were injured.”

“Each country blames the other for the incident. On Monday (11/26/18) Ukrainian MPs are due to vote on declaring martial law.”

The crisis began when Russia accused the Ukrainian ships of illegally entering its waters.

The Russians placed a tanker under a bridge in the Kerch Strait – the only access to the Sea of Azov, which is shared between the two countries.

“During a meeting of Ukraine’s National Security and Defence Council, President Petro Poroshenko described the Russian actions as “unprovoked and crazy”.

Tensions have recently risen in the Black Sea and the Sea of Azov off the Crimean peninsula – annexed by Russia in 2014.” 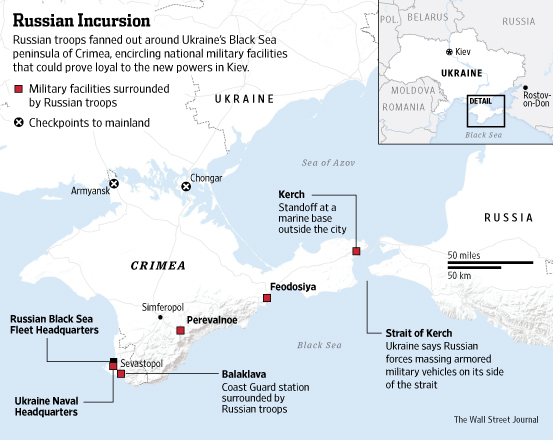 How did the crisis unfold?

“In the morning, Ukraine’s Berdyansk and Nikopol gunboats, and the Yana Kapa tug, tried to sail from the Black Sea port of Odessa to Mariupol in the Sea of Azov.”

“Ukraine says the Russians tried to intercept the ships, ramming the tug. The vessels continued towards the Kerch Strait, but were prevented by the tanker.”

“Russia scrambled two fighter jets and two helicopters to the area. It accused the ships of illegally entering its waters and said the traffic had been suspended for security reasons.”

“The Ukrainian navy later said the boats had been hit and disabled as they tried to leave the area. It said six crew members had been injured.”

“Russia’s FSB later confirmed that one of its patrol boats had used force to seize the three Ukrainian vessels but said only three sailors had been wounded.”

“Ukraine said it had informed the Russians of its plan to move its ships through the sea to Mariupol.”

“Tension between Russia and Ukraine has been building for months off Crimea.”

“Under a 2003 treaty between Moscow and Kiev, the Kerch Strait and the Sea of Azov are shared territorial waters.”

“But recently there, Russia began inspecting all vessels sailing to or from Ukrainian ports.”

“The use of force by Russia to seize Ukrainian vessels – with casualties – is a major escalation. But you won’t hear Moscow taking the blame.”

“Under President Vladimir Putin, when Russia has used force before, its line of defence has always been: “We didn’t start it.” That goes for the Russia-Georgia War of 2008, and the appearance of “Little Green Men” (Russian special forces) in Crimea in 2014, which preceded Moscow’s annexation of the peninsula.”

“So, expect Moscow to pin the blame for what happened on Sunday and for whatever happens next on President Poroshenko’s government.” 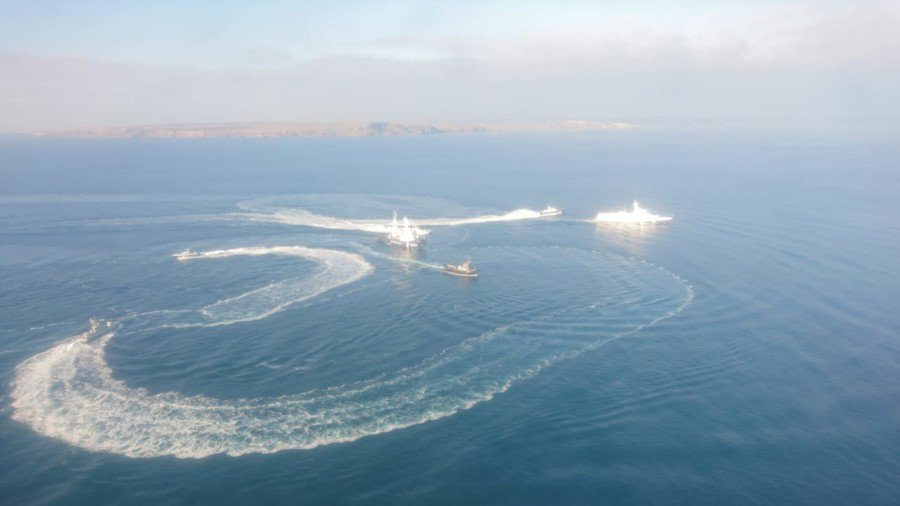 “The European Union called on Russia to “restore freedom of passage at the Kerch Strait” and urged “all to act with utmost restraint”.

“Nato said it “fully supports Ukraine’s sovereignty and its territorial integrity, including its navigational rights in its territorial waters”. It said Russia should “ensure unhindered access to Ukrainian ports in the Azov Sea”. 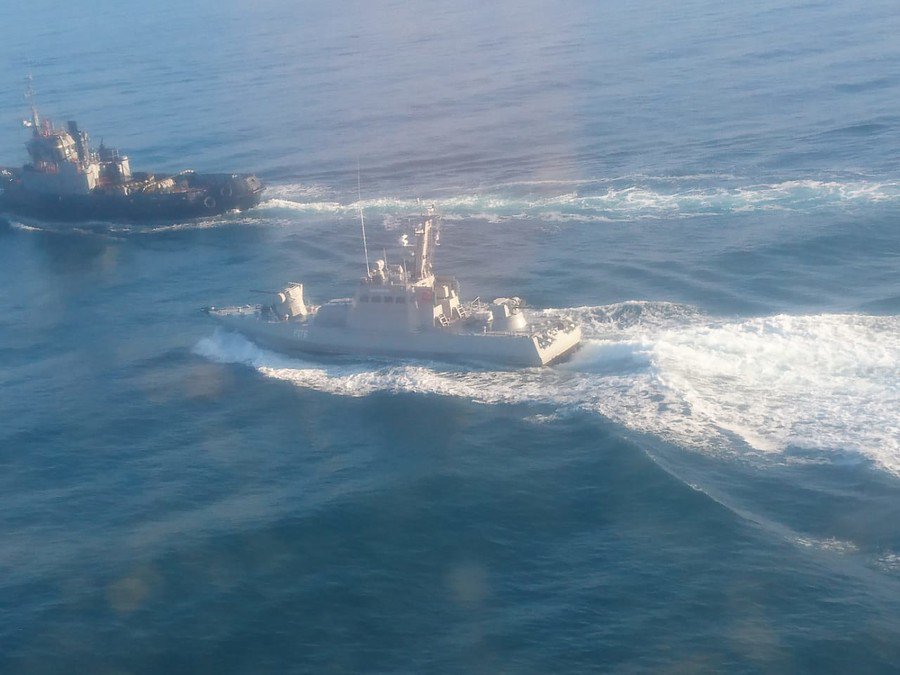 What’s the background to this?

“The shallow Sea of Azov lies east of Crimea, and south of the Ukrainian regions partially seized by pro-Russian separatists.”

“The 2 Ukrainian ports on its northern shore – Berdyansk and Mariupol – are key to exporting grain and produce such as steel, also for importing coal.”

“The 2003 treaty between Ukraine and Russia guaranteed free navigation to both countries’ vessels.”

“But Russia has recently begun inspecting ships going to or from Ukrainian ports. Earlier this month, the EU warned it would take “targeted measures” to address the issue.”

“The inspections began soon after Ukraine detained a fishing vessel from Crimea in March. Moscow says they are necessary for security reasons, pointing to a potential threat to the bridge from Ukrainian radicals.”

“More than 10,000 people have been killed in the eastern Donetsk and Luhansk regions since separatists moved against the Ukrainian state in April 2014.”

“Ukraine and the West accuse Russia of sending its troops to the region and arming the separatists.”