I and most of my blogging family had figured out quite awhile ago that the republican President Donald Trump was acting like the perfect Russian asset. It looked like the president had a deal to somehow figure out how drop the 2014 US sanctions against Russia because of its unprovoked invasion and illegal annexation of Crimea, Ukraine, in exchange for Russia helping Mr. Trump win the presidency. We could do nothing more than speculate that President Trump had plans to benefit financially in the future from this Russian deal.

But in March 2018, an old buddy of the president, Felix Sater spilled the beans about their plans with Michael Cohen to develop the Moscow Trump Towers with financing from a US sanctioned Russian Bank VTB. As per the below Business Insider report, Sater claimed that he and President Trump’s longtime personal lawyer, Michael Cohen, were pushing for the deal with VTB in Moscow at the height of the presidential election, in late 2015 and early 2016. In order to pull this project off, they needed to figure out how to get those pesky US sanctions dropped.

Can you just picture how Russia’s President Vladimir Putin felt after he helper Donald Trump become the 45th US president and when he didn’t get those sanctions dropped? The only question left is, what kind of demands was he making in exchange for all his efforts and for his silence from President Trump. No wonder President Trump has been scared to death of him. It was just fortunate for President Trump that there were GOP lawmakers who were willing to help the him cover up his compromised situation.

But because of the persistence of the FBI’s Special Counsel Robert Mueller III and his team overseeing the Trump-Russia probe started in 2016, a lot of this data will become public with more details within the near future.

“VTB, a Russian state-owned bank, was initially added to the US’s Specially Designated Nationals List (SDN) in July 2014, which froze its assets in the country and restricted US citizens and companies from doing business with VTB and its subsidiaries. The US later imposed additional sanctions on VTB in December 2015.”

“Sater and Trump’s longtime personal lawyer, Michael Cohen, were pushing for the deal with VTB in Moscow at the height of the presidential election, in late 2015 and early 2016. The revelation will likely draw sharp scrutiny from the special counsel Robert Mueller, who recently subpoenaed the Trump Organization for documents related to the Trump Tower Moscow deal.”

“Sater first sent a non-binding letter of intent to Cohen outlining the terms of the “Trump World Tower Moscow” deal on October 13, 2015, The New York Times previously reported. Andrey Rozov, a Russian investor, had already signed it by the time Sater forwarded it to Cohen, and Trump signed the letter.”

“Weeks later, the two men exchanged a series of emails gearing up to celebrate the Trump Tower Moscow deal. In the emails, obtained by The Times, Sater bragged about his relationship with Russian President Vladimir Putin and told Cohen he would “get all of Putins team to buy in” on the deal.”

“Our boy can become president of the USA and we can engineer it,” Sater wrote, according to The Times.

“Felix Sater, a Russian-born businessman with financial ties to the Trump Organization, confirmed Friday that President Donald Trump’s business was privately negotiating a deal with a sanctioned Russian bank during the 2016 US election.”

“The detail first emerged in a status report that democrats on the House Intelligence Committee released earlier this week in response to Republicans’ decision to shut down the committee’s Russia investigation. The report outlined dozens of leads — including witness testimony, document requests, and subpoenas — the minority said it was not able to pursue.” 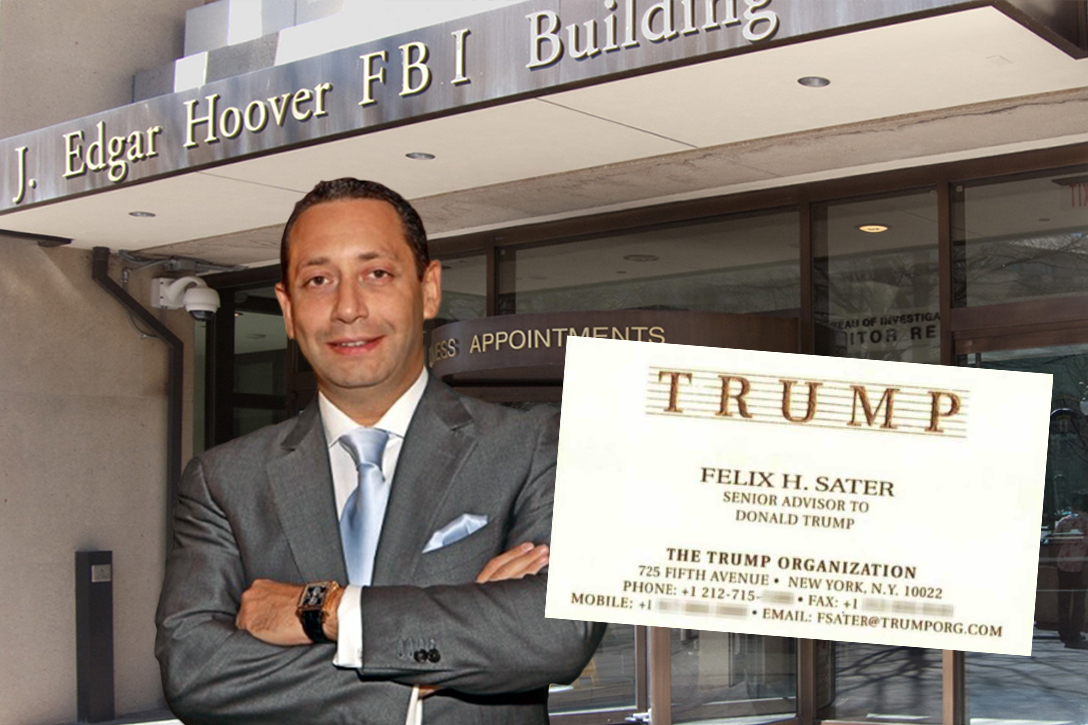 “On Friday, Sater told MSNBC host Chris Hayes that a local developer in Russia worked on behalf of the Trump Organization to secure financing for a Trump Tower in Moscow from VTB Bank, Russia’s second-largest bank and a US-sanctioned entity.”

“I had a local developer there [in Russia], and I had the Trump Organization here [in the US], and I was in the middle,” Sater said. “And the local developer there would have gotten financing from VTB and/or another Russian bank, but VTB at that point was the go-to bank for real-estate development.”

“Sater added: “I will get Putin on this program and we will get Donald elected.” 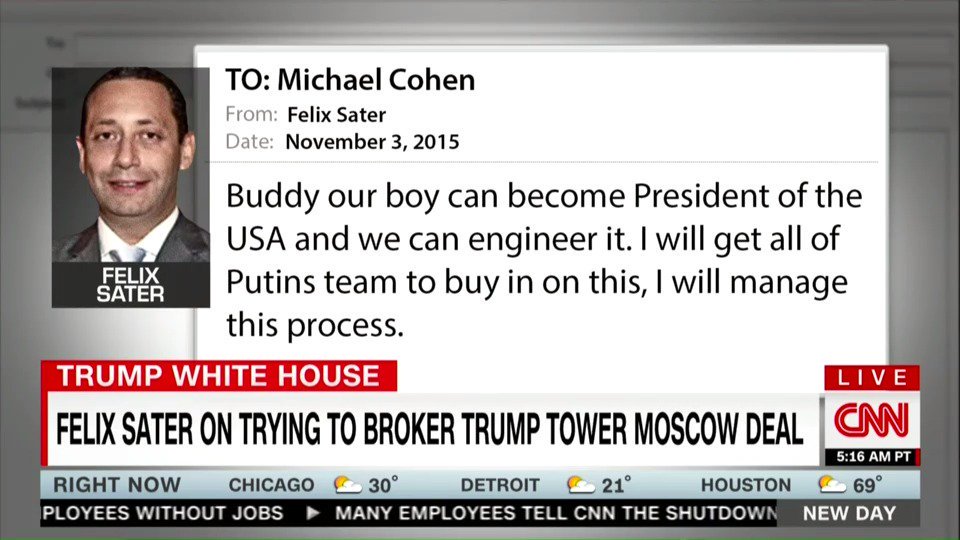 “Sater walked back his comments in an interview with BuzzFeed, telling the outlet he had exaggerated his relationship with Putin in order to secure the deal. On Friday, he told Hayes that his communications with Cohen were not meant to be “something surreptitious.”

“It wasn’t my deal,” Sater said. “I put the deal together. I came through Michael Cohen. Part of the emails is, I’ve known him since I’m a teenager. So it’s basically two old friends saying, hey, our guy can become president. We were excited.”