How Russia Has Been Running The USA, GOP Lawmakers With Help From Donors On A Daily Basis

The three entities of Russia, GOP Lawmakers, Corporate Donors have been unwittingly conspiring to destroy this great US democracy which until recently, was that shining light on a hill, a country that others looked up to as a beacon for good. This week of December 3, 2018, the passing of a true leader President H.W. Bush, has reminded most Americans of past better times.

We the people already know that the republican President Donald Trump has covered up his financial ties to countries like Russia because of his personal goal to eliminate the 2014 and other US sanctions against Russia because of its 2014 unprovoked invasion into Ukraine and its illegal annexation of Crimea. Before the president’s dream of a Moscow Trump Towers was shut down around June 2016, the president had needed financing for this Moscow project from the US sanctioned bank VTB.

In addition, we all have learned that the president and his National Security Adviser General Flynn had been working to end these US sanctions against Russia even before they were transitioned into the White House. Many of us have long suspected that our president had cut a deal with Russian top officials including President Vladimir Putin to work at eliminating the US sanctions against Russia in exchange for Russia helping him to win the White House.

The president’s actions had become so obvious to where even the GOP lawmakers in the US Congress took steps to block his efforts.

In August 2017, on a bipartisan basis the US Congressional republicans and democrats  overwhelmingly passed a veto proof bill barring the president from arbitrarily lifting any US sanctions imposed against Russia from 2012-2017 without congressional review.

Now think of what Russia’s reaction would have been, to know they delivered the goods they promised to President Trump but that the US president had reneged on his part of the bargain. Do the recalcitrant republicans in the US Congress who have refused to be a check on this president think for even one second, that Russia’s President Vladimir Putin decided to just walk away from a deal gone bad or was he going to demand his pound of flesh?

President Putin had to be livid  to where he felt emboldened to make demands. So every time we saw President Trump dish our NATO members; make unreasonable demands regarding tariffs against our neighbors and allies, withdraw from long held agreements, it could be said that President Trump was fulfilling Russia’s objectives. In short, Russia could not have succeeded in putting a wedge between the US and our allies and neighbors of 70 plus years without the help of our US president.

Everyone has been a witness as to how effectively the president has managed to sow division among the American peoples as he attacked the long held pillars of our US democracy, like ‘freedom of the press,’ the rule of law, the integrity of the US voting infrastructure, our respect for truth and decency. It can be said that the president has been following the orders of Russia’s President Putin along with the assist from his GOP cronies in the US Congress, magnificently.

The US Corporate donors who helped catapult President Trump into the White House are also complicit in his duplicity. But they didn’t care about his lack of character and decency as long as he delivered on huge corporate tax cuts and an unraveling of past governmental regulations. The Evangelicals didn’t care as long as the president ensconced conservative anti-abortion justices on the US Supreme Court. The racists, anti-immigration faction of the the president’s base are okay with him selling out our country.

All of us have been in shock over observing how complicit the GOP congress legislators and other leaders have been with delivering on Russia’s goals just because they have been too cowardly to confront their standard bearer.

When President Trump embarrassed most of us who watched him acquiesce to President Putin at the July 2018 Trump-Russia Helsinki Summit, the GOP lawmakers still continued to carry his water and to cover for him. 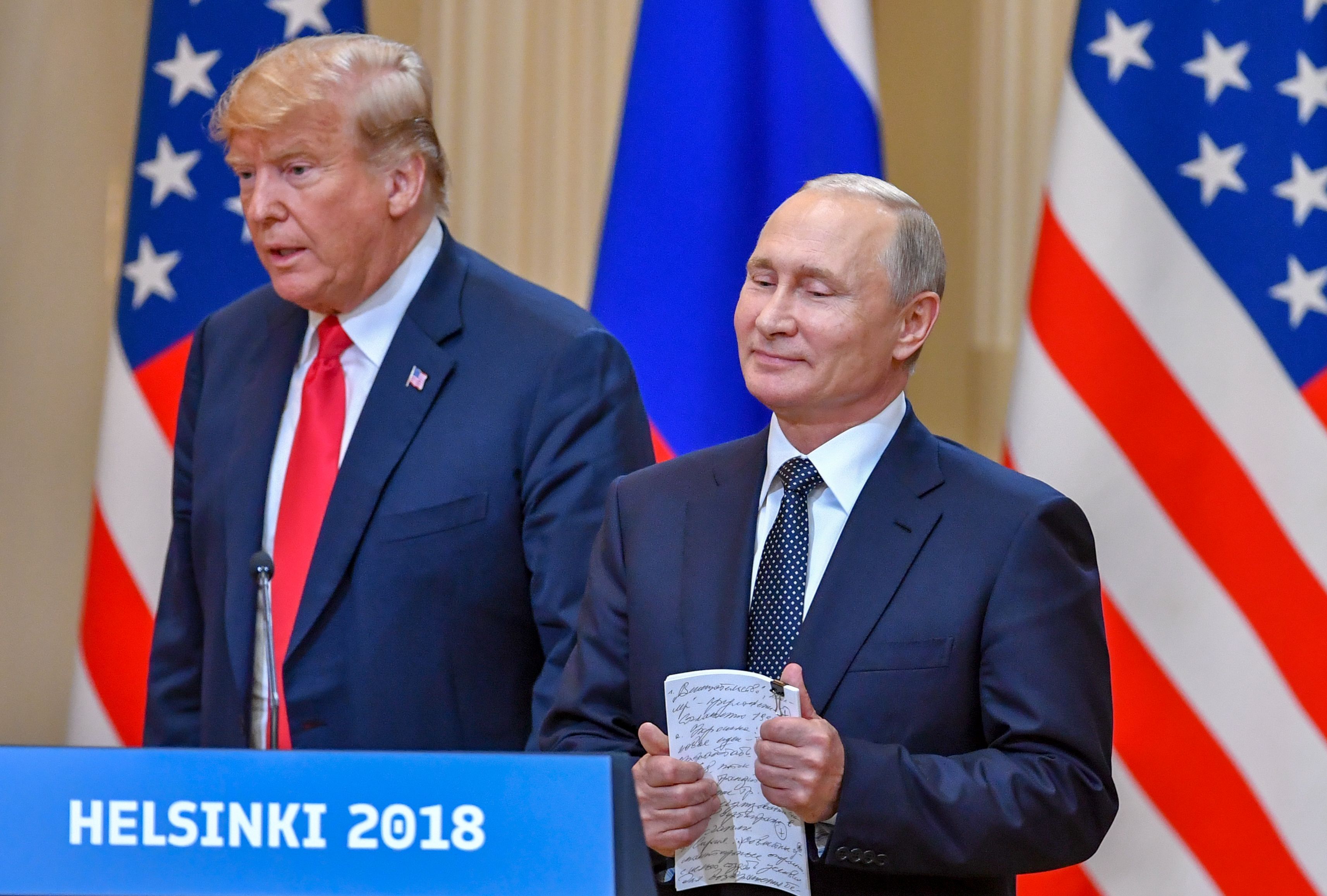 For example, a couple of GOP leaders pontificated as to how President Trump has been tough on Russia by the placement of additional sanctions against Russia when Russia assassinated ex-pats living in the UK.

In addition, as per a March 31, 2018 Business Insider report, “A State Department official confirmed to Business Insider that the White House’s diplomatic expulsion will not require Russia to reduce its staffing levels in the US, and vice versa. In other words, the 60 diplomats who were kicked out — many of whom were undercover intelligence operatives— can be replaced by others.”

Then the president backed out of his previously agreed upon sanctions to be announced on April 16, 2018, leaving the US Ambassador Nikki Haley with egg on her face, with his odd comment that he didn’t want to antagonize Russia because its officials never mounted a military response to the US bombing along with the UK and France of chemical weaponry manufacturing sites in Syria.

According to the the New York Times, Donald Trump “grew angry” watching Ambassador Haley make the announcement on TV, suggesting that “he had decided no such thing.” What happened next exposes both the crisis of communication within the White House and the administration’s eagerness to throw Haley under the bus. 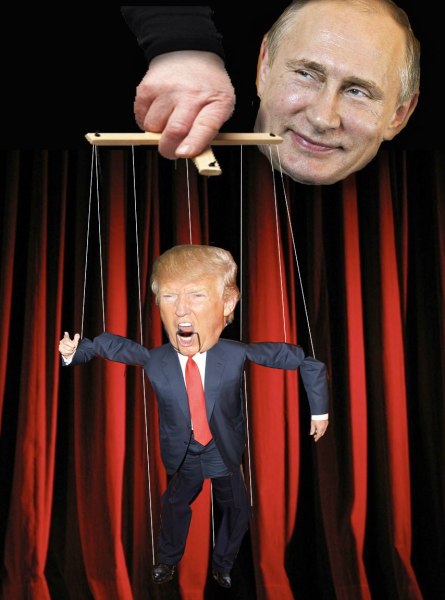 As per a 4/17/18 Quartz report, “In an effort to fix the situation, and hopefully hide the evidence that no one in the Trump administration knows what’s going on, the White House resorted to a classic move: Blame the mistake on the woman involved.”

“Haley “got ahead of the curve,” the president’s economics advisor Larry Kudlow told reporters at Mar-a-Lago on Monday. “She’s done a great job. She’s a very effective ambassador, but there might have been some momentary confusion about that.”

“The ambassador, who is in the tricky position of attempting to conduct international relations and maintain credibility despite Trump’s mercurial approach to politics, stood her ground.”

“With all due respect, I don’t get confused,” she said Tuesday, speaking with Fox News host Dana Perino.”

It appears that the only person who was not confused regarding President Trump and his raging mercurial hormonal attitudes towards his dealing with Russia was the US United Nations Ambassador Nikki Haley. I had wondered at this point, how she was going to manage her exit from Putin entourage working in the White House.

That moment in time hearkens to today’s times. It took the CIA Director Gina Haspel  to have the courage to tell a select group US congressional lawmakers the truth about the Saudi Arabian Crown Prince Mohammed bin Salman (MBS) having ordered the murder of a US resident and Washington Post journalist Jamal Khashoggi in a Saudi embassy in Turkey, while the Secretary of State Mike Pompeo and the Defense Secretary General James Mattis had continued to  follow the president’s lead of denying this reality because he wants to continue to do business with MBS.