Why Hasn’t There Been Reporting About FBI Talking To Rex Tillerson About !st Trump-Russia Summit?

Before there was the July 2018 Helsinki Trump-Russia Summit where the republican President Donald Trump embarrassed many Americans when he publicly shared his beliefs in President Vladimir Putin’s lies over proof developed by the US Intelligence community, there was the July 2017 hour plus Trump Russia Summit in Hamburg Germany. At this summit, Presidents Trump and Putin were able to have a side lengthy discussion with only one US observer, the then US Secretary of State Rex Tillerson.

The question is, has the former US Secretary Tillerson been debriefed by the FBI, the US Congress or even the US intelligence agencies as to what he heard and witnessed about this tête-à-tête between the two leaders?

During this time-frame of the July summit, the US Congress lawmakers were in the process of barring President Trump by legislation from being able to eliminate any US / NATO sanctions against Russia, most of which had been  imposed because of Russia’s 2014 unprovoked invasion of Crimea in Ukraine and its illegal annexation of this region.  This meant that President Trump was not able to allegedly follow up on his part of the bargain with Russia, which was to end these sanctions in return for Russia’s election assistance on his behalf.

Within a month of the Germany summit, President Trump grudgingly signed a bill into law that imposed new sanctions on Russia and sharply limited his ability to lift them. Since the bill sailed through Congress with a veto-proof majority, his only options were to sign it or to veto it and then endure the humiliation of seeing Congress — controlled by his own party — override him.

When he signed the bill, he issued a statement calling the law “significantly flawed” and claiming that it contains “unconstitutional provisions” in its restrictions on presidential authority. Below is a 2015 Brookings’ analysis of Russia’s President Putin’s goals. It becomes obvious that the US president has magnificently advanced Russia’s goals with help from GOP lawmakers and their big money donors.

As per a DW 2017 report, “After 12 years in office, German Chancellor Angela Merkel has taken part in quite a few summit meetings. Now the G20 summit in Hamburg will serve as the venue for this year’s mammoth event. The world’s 20 leading rich and developing nations will be attracting far more visitors than usual.”

“This year, the G20 summit will take place under particularly challenging conditions,” the chancellor said. “I will only list the greatest challenges: terrorism, climate change, protectionism – and all of these topics are on the agenda. The world has become less unified.”

“The lack of unity is embodied by US President Donald Trump, Russian President Vladimir Putin and Turkish President Recep Tayyip Erdogan. All three leaders will attend the summit, and it is already clear that each one is pursuing his own agenda.”

“Trump wants to use the summit as an opportunity to meet Putin in person for the first time. There are many things to be discussed, ranging from the Ukraine crisis to the war in Syria, the sanctions against Russia and the Kremlin’s alleged influence in Trump’s election.”

Business in the spotlight

“The challenge is to find a formula that underpins the Paris (Climate Accord Agreement without having to take extreme (meaning isolating) positions. Other topics will be easier to discuss, like the joint fight against terrorism, women’s policy and health care. Merkel said she is “very optimistic” about that. There is also expected to be little controversy on refugee policy.”

“Since the G20 summit is the main forum for international economic cooperation, business is obviously high up on the agenda this time around. Free trade will also play an important role. Merkel would like the G20 to send a clear message on the necessity of free markets and multilateral trade systems.” 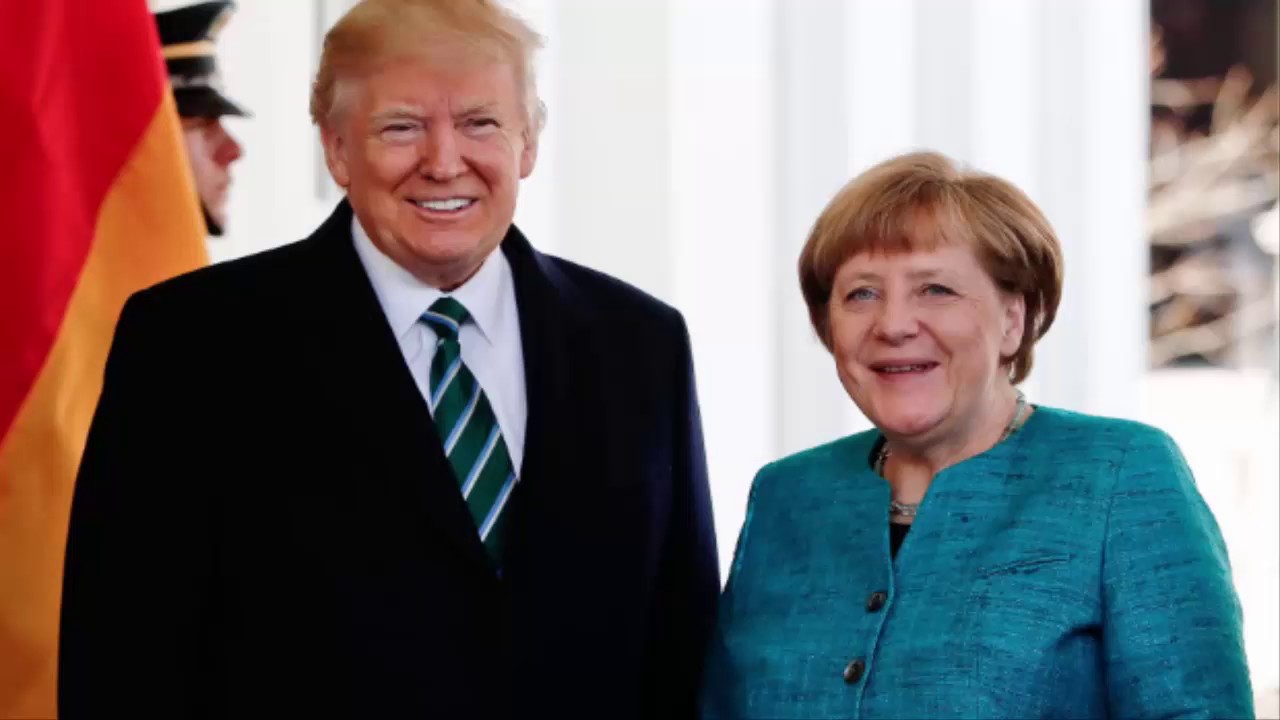 “For the summit, I have set the goal of sending a message of determination with which G20 leaders show that they have acknowledged great responsibility for the world and accepted this responsibility,” said Merkel, adding only mutual efforts can move something “more quickly and effectively than would be possible with unilateral action.”

“It should be obvious to most Americans by now, that Russia’s President Putin’s objectives conflicted greatly with that of Chancellor Merkel.”

“As per the  February 24, 2015 Brookings report, “This is what Putin really wants” by Fiona Hill, “In Ukraine, and in his whistle-stop trip to Hungary, Putin is out to score points for Russia. He is not out to win friends in Ukraine or Europe. Nor is he out to restore a Russian empire, or build a new Moscow-centric geopolitical order. Putin wants respect for Russia, not external obligations. He wants respect in the old-fashioned, hard-power sense of the word. Other countries should proceed with caution if they consider trampling on Russia’s interests. In the neighborhood, now that he essentially has the Crimean city of Yalta back in the fold, Putin wants to turn the clock back seventy years to the old “Yalta agreement” of 1945. He is pushing for a new division of spheres of influence. For Putin, the contours of Russia’s sphere correspond with the historic boundaries of the Russian Empire and the USSR. Here, Moscow’s priorities override all others. Russia—as Putin has stressed in numerous speeches––is the only country in this neighborhood with a unique civilization (rooted in Russian Orthodoxy and language), a long imperial history, a robust economy (based on energy and abundant natural resources) and the capacity to defend its territory and project power abroad. In the international arena, the United States and China are in the same category (although Putin is often scathing about the United States), but few other states have independent standing.”

“Putin is a practitioner of realpolitik in its starkest form. In his interactions with regional leaders, Putin has laid out his view that all the states that emerged from the USSR are appendages of Russia. They should pay fealty to Moscow. Other European countries, including the former great powers of France, Germany and the UK, are satellites of the United States, grouped under the umbrella of NATO and the European Union. The unaligned operate in the shadows of two blocs, as Putin put it once to Georgian leaders. The only open question for Putin is who gets to decide the final borders of his new Yalta, Russia or the United States. The future of Ukraine and the Donbas are one set of decision points. Elsewhere, Russia has announced it will lift border controls between Russia and Georgia’s separatist regions of Abkhazia and South Ossetia; and Putin is questioning other borders in the Soviet Union’s old stomping grounds in the Baltics and Eastern Europe. ”

“Redrawing borders in Crimea was Putin’s first major victory. Putin has long expressed his personal sense of humiliation when Russia lost its geopolitical position in Europe with the fall of the Berlin Wall. Twenty-five years later, Putin told the world Russia was no longer in retreat. In his March 18, 2014 speech marking Crimea’s annexation, Putin savored a moment of personal triumph. Russia had taken back Crimea. Now it would chart its own course in Europe and the world. For the historical record, Russia had never accepted the international order created by the United States and its European allies in the 1990s, Putin declared. It had “swallowed the insult” of the loss of territory and population, because the country was then in such a severe condition that it simply could not realistically defend its interests. Today, Putin emphasized, Russia is a very different country.”

“Right now the West looks weak to Putin. The eurozone crisis has undermined the European Union politically and economically. The United States is overextended after more than a decade of wars in Afghanistan and Iraq and seems incapable of dealing with crises in the Middle East. China is the dominant player in East Asia. Putin is taking full advantage of the situation, snubbing his nose at sanctions and running rings around European diplomats who are anxious to end the war in Ukraine. He has rallied the population at home with emotional evocations of Russian imperial glories, Soviet nostalgia.” He has depicted himself as the leader of an international coalition of conservative politicians and states confronting the excesses of a decadent West. Russian history, imperial nostalgia, religion and values have all proven potent instruments.”

“With no endgame in sight in Ukraine, Putin is now focusing on the European arena. The current set of EU and U.S. sanctions come up for review between March and July 2015. After playing the peacemaker in the Donbas with the latest Minsk agreement, and with the oil price on its way back up, pulling along the ruble, Putin is betting that energy and trade will maintain his string of successes. In Hungary, he was welcomed as a great-power representative and important energy supplier. He will shortly have a similar reception in Cyprus, where Russia already has a strong economic foothold. Greeks, Bulgarians, Macedonians, Serbs and Turks are all keen to do business deals with Russia. All of this helps Putin emphasize the fact that Russia has its own coalition, even in the European neighborhood.”

“Putin’s goal is to pull Europeans away from the United States, divide them among themselves and get the European Union to lift the sanctions for him––all without conceding anything on Crimea or resolving the war in Ukraine. In short, Putin wants Europe to understand—as he stated in a 2014 speech to Russia’s ambassadors––that the U.S.-led “unipolar order” is over. The United States trumpeted its victory in the Cold War. Now it is the West’s turn to be humiliated. And Putin intends to have Russia draw up the new borders of a Europe “free, whole and at peace” that the United States, NATO and the EU defined after 1989.”

“Putin’s meddling (into 2016 US elections) did give him a different power: fear. His moves have meant that Russia has become a virtual bogeyman, viewed as the unseen mover behind almost anything.”

“All of a sudden, they’ve become the people who decide elections in the United States and throughout the Western world, and are stirring the pot and making decisions everywhere,” said Thomas Graham, former Russia director on the National Security Council under President George W. Bush. “I think they’re bemused by it more than anything else, because historically Putin is well aware of what their vulnerabilities are.”

“That strength has returned Russia to the world stage after being sidelined for years after the Cold War and the fall of the Soviet Union.”

“It has also created enormous political unrest in the United States, with Trump being viewed as an illegitimate president on the left because of the help he got from Putin, even as GOP members of Congress order up investigations of whether the FBI was biased in favor of Clinton.”

“The reason to interfere in our election is to sow a little bit of chaos, to undermine confidence in our election and to create some doubts, and in that regard there has probably been a fair amount of success,” said Steve Pifer, former U.S. ambassador to Ukraine and a nonresident fellow at Brookings.”

“Even if Clinton had won, the concern about the integrity of the election, spurred on by Trump’s statements about the vote being “rigged” during the campaign, would have unsettled Americans.”

“The ultimate goal is to destabilize politics from within, to make countries incapable of reaching consensus and decisions, which of course makes them less of a threat to Russia’s interests, in Russia’s view,” Polyakova said.”

“The continued partisan divide over the Russia investigations might prove that while Putin may not have gotten everything on his wish list, he didn’t come away empty-handed.”