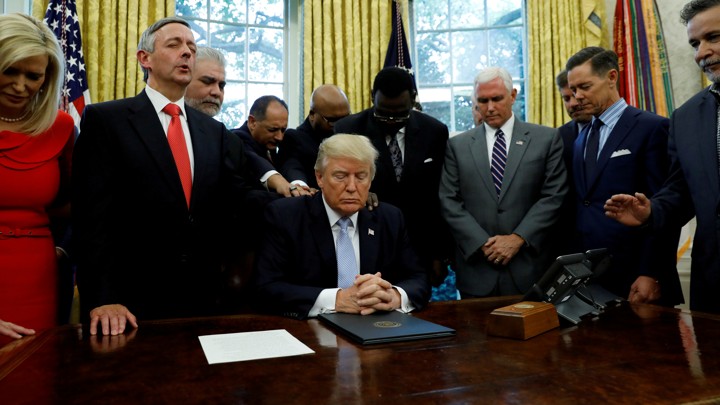 In my prior post, I argue how the republican President Donald Trump has been working overtime to keep his power base of anti-immigration hard-liners/ racist/ anti-LGBTQ/ anti Semitic supporters intact.

But he has also been doing likewise to maintain the backing of his other reliable voting bloc, White Evangelicals, who voted in favor of President Trump by a 80% margin in 2016. Two years later, he still has their backing by about 70%.

Both these factions within his base are strongly in favor of the president building his US SW border wall.

It is important to note that President Trump’s administration includes two high profile Evangelicals, Vice President Mike Pence and his US Secretary of  State Mike Pompeo. It is a concern of mine that these two men have influenced some of the president’s policies both domestically and abroad. For example the presidents transgender ban for the military would be an example of the president implementing policy to cater to his base.

Recently, while Secretary Pompeo was in Cairo, Egypt, he publicly thrashed the policies regarding Syria by the previous democratic administration under President Barack Obama, even though he is repeating some of the very same mistakes that he attributes to President Obama. In addition he talked about “The Rapture,” a belief system of Evangelicals, where one day out of the blue, God will bring his peoples home but others will be left behind to face some tough times, termed the tribulation.

During President Barack Obama’s time in office, many of these Evangelicals had jumped on Donald Trump’s band wagon when he was questioning the validity of the former Democratic President’s US citizenship.

I’ve personally witnessed their spouting of vitriolic rhetoric against the Democratic Party former President Barack Obama, referring to him as the anti-Christ and a Muslim, even though he has professed to be Christian. Their hatred for this good man was off the charts.. It’s my opinion that this bias permeated the speech delivered by Secretary Pompeo in Cairo.

The below article refers to US foreign policy with regards to Syria and the Kurds, where President Trump with support from his Secretary of State Pompeo, were endeavoring to arrange for the immediate withdrawal of US military special forces personnel from Syria based on a request from Turkey’s President Recep Tayyip Erdogan, around early January 2019. This tactic would leave the US best military allies in its fight against ISIS, the Kurds located in NE Syria, exposed to the Turks wrath, who hate the Kurds worse than ISIS. The national security adviser, John Bolton had objected to this plan while the Defense Secretary James Mattis ended up resigning in protest over this ill-advised thinking.

On January 10, 2019, The Editorial Board of the Washington Post penned the following analysis, “Mike Pompeo lambastes Obama — and then embraces Obama’s Syria strategy”

“SECRETARY OF STATE Mike Pompeo on Thursday delivered a speech in Cairo that was supposed to clarify the Trump administration’s Middle East policy. Instead, it was a study in its contradictions.”

“Mr. Pompeo began by crudely vilifying the record of the Obama administration, saying, “When America retreats, chaos often follows.” But he ended by confirming that U.S. troops would be leaving Syria, and articulated a follow-up strategy for that country virtually identical to that pursued, unsuccessfully, by President Barack Obama. Mr. Pompeo was seeking to persuade Arabs that “America is a force for good in the Middle East.” But his listeners had more reason to be confused than convinced.”

“It was telling that Mr. Pompeo defined President Trump’s foreign policy first as a contrast to that of Mr. Obama; doing the opposite of whatever Mr. Obama did, rather than forming rational judgments of the region’s complex problems, appears to be the administration’s guiding light. In rhetoric better suited to a partisan debate in Washington than an address in a foreign capital, Mr. Pompeo faulted the previous president for timidity in confronting Syrian dictator Bashar al-Assad, as well as “willful blindness” with respect to Iran.”

“Yet, after asserting, without justification, that “now is the time” to withdraw U.S. forces from Syria, Mr. Pompeo insisted that the US would nevertheless “expel every last Iranian boot” from the country. How? Through “diplomacy and work with our partners.” Further, the administration would achieve “stability” in Syria “through the U.N.-led [peace] process.” The rhetoric was virtually identical to that of then-Secretary of State John Kerry, whose tireless work over several years proved definitively that those goals are unreachable without the leverage of U.S. military power.”

“While echoing Mr. Obama’s envoy, Mr. Pompeo muddled the message of his own administration’s national security adviser, John Bolton. Mr. Bolton, rolling back statements by Mr. Trump, earlier this week spelled out “objectives” he said had to be met before U.S. troops left Syria, including the complete defeat of the Islamic State and guarantees from Turkey that it would not attack U.S.-allied Kurds. He also hinted that one U.S. base in southern Syria would remain to thwart the movement of Iranian forces.”

“Mr. Pompeo dismissed accounts of these contradictions as “made up by the media.” But not only reporters are confused. Turkish President Recep Tayyip Erdogan, who according to the new White House plan is supposed to fill the vacuum left by departing U.S. forces, was infuriated by Mr. Bolton’s comments and refused to meet with him. The pro-government Turkish press claimed Mr. Bolton had staged a “soft coup” against Mr. Trump.”

“We wouldn’t go that far, but something is badly amiss here. Mr. Trump’s priorities seem clear, if unfounded: to reverse any policy pursued by Mr. Obama and to withdraw all U.S. forces from the Middle East. The president’s advisers have more hawkish intentions but lack either a coherent strategy or Mr. Trump’s full backing. None of them seem to understand that while denouncing Mr. Obama’s mistakes, they are, in Syria, about to repeat them.”

The Post’s View: Oppression in the Middle East is worse than ever — and Trump is encouraging more