On the 16th of January 2019, the Inspector General for the U.S. General Services Agency (GSA) finalized its report which found that this governmental agency was negligent in leasing its property, now the Trump International Hotel in Washington DC, to the republican President Donald Trump by ignoring constraints set up to block this agreement  as per the US Constitution and as per a specific clause contained in the leasing contract, itself.

This report will inevitably lead to inquiries and review by at least one of the US House oversight committees; and it could end up being used by those who have filed lawsuits against the president over this hotel.

As per a 1/16/19 Bloomberg report published by Fortune, “Watchdog Slams U.S. GSA’s Lease to Trump Hotel, Says It Violated Obligation “to Uphold and Enforce the Constitution, “The U.S. General Services Administration (GSA) ignored a constitutional ban on extra government benefits to the president when it allowed Donald Trump to continue leasing federal property for his luxury hotel in Washington, the agency’s watchdog (the GSA inspector general) said Wednesday (1/16/19).”

“The GSA inspector general concluded in a report that”GSA officials knew Trump’s ultimate ownership of the hotel—which sits on federal property—potentially violated a provision of the lease with the government: it also may have violated two clauses in the Constitution prohibiting “emoluments”(gifts from foreign governments) to the president.”

“In late 2016, senior agency attorneys agreed that Trump’s ownership of the hotel as president may have violated the Constitution, but they decided to “punt”, one of them told the (GSA) inspector general, according to the report.”

“The Trump International Hotel in Washington has become one of the president’s most successful property projects, generating revenues from foreign governments that rent space for events and favor-seekers eager to be seen in the president’s hotel on Pennsylvania Avenue, just blocks from the White House.” 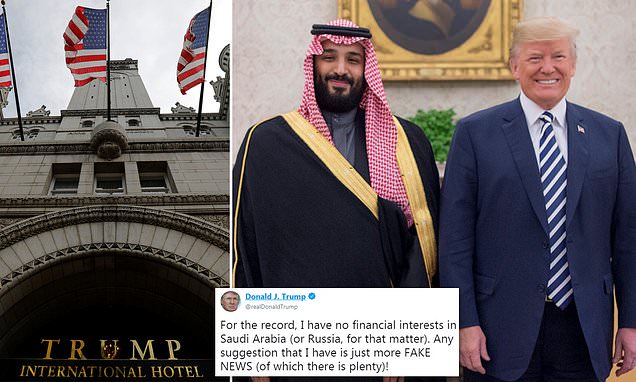 “Trump owns the hotel through his trust, which holds all of his business interests, and ultimately profits from it. The hotel has become a magnet for high-powered Republicans in Washington, from lobbyists to lawmakers, who rent rooms and spend money at the hotel’s restaurants.”

“For the same reasons, the hotel has attracted controversy, especially from Democrats and good-government groups, who argue that Trump is profiting from the presidency. They say that makes him susceptible to corrupt interests who would court favor by enriching the president’s family business, the Trump Organization. The attorneys general of Maryland and Washington have sued Trump alleging he’s violating the Constitution.”

“The Trump Hotel is a glaring physical symbol of the Trump Administration’s refusal to play by the same rules as everyone else,” said Representative Elijah Cummings, a Maryland Democrat and chairman of the House Oversight Committee.”

“The GSA’s in-house auditor recommended that the agency conduct a formal legal review of the Constitution’s emoluments clauses and revise the contract governing the lease. The agency agreed with the recommendation.”

“Representative Mike Quigley, an Illinois Democrat and the chairman of congressional panel that oversees GSA, said he plans to “demand an explanation for GSA’s irresponsible behavior.” 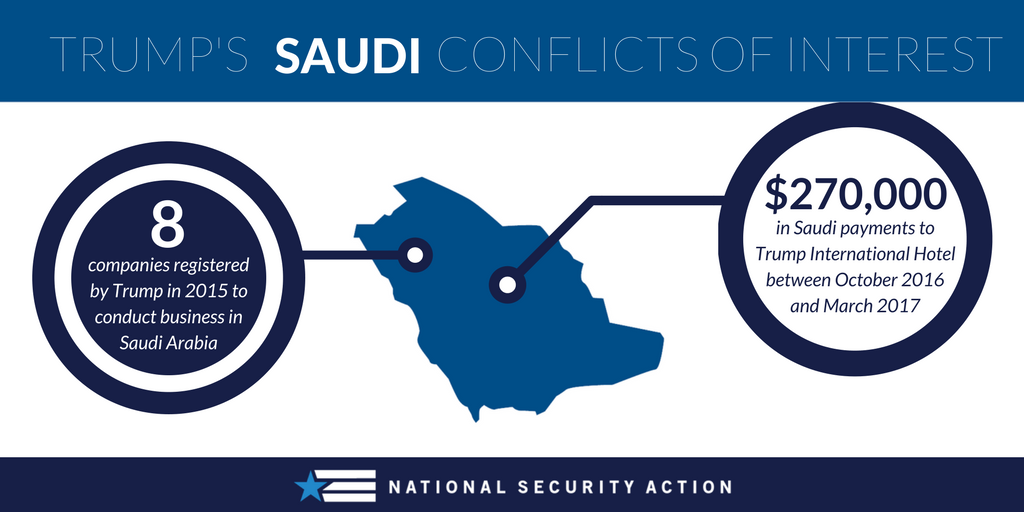 Before January 2017, this hotel was a white elephant. The hotel vacancy rate was high and the restaurants were virtually empty. All that changed drastically as soon as the president was ensconced in the White House.

Almost from the time that republican President Donald Trump moved into the White House, he has been facing lawsuits regarding his lease of the old US post office turned into his Trump International Hotel in Washington DC from the US Government Services Administration (GSA). 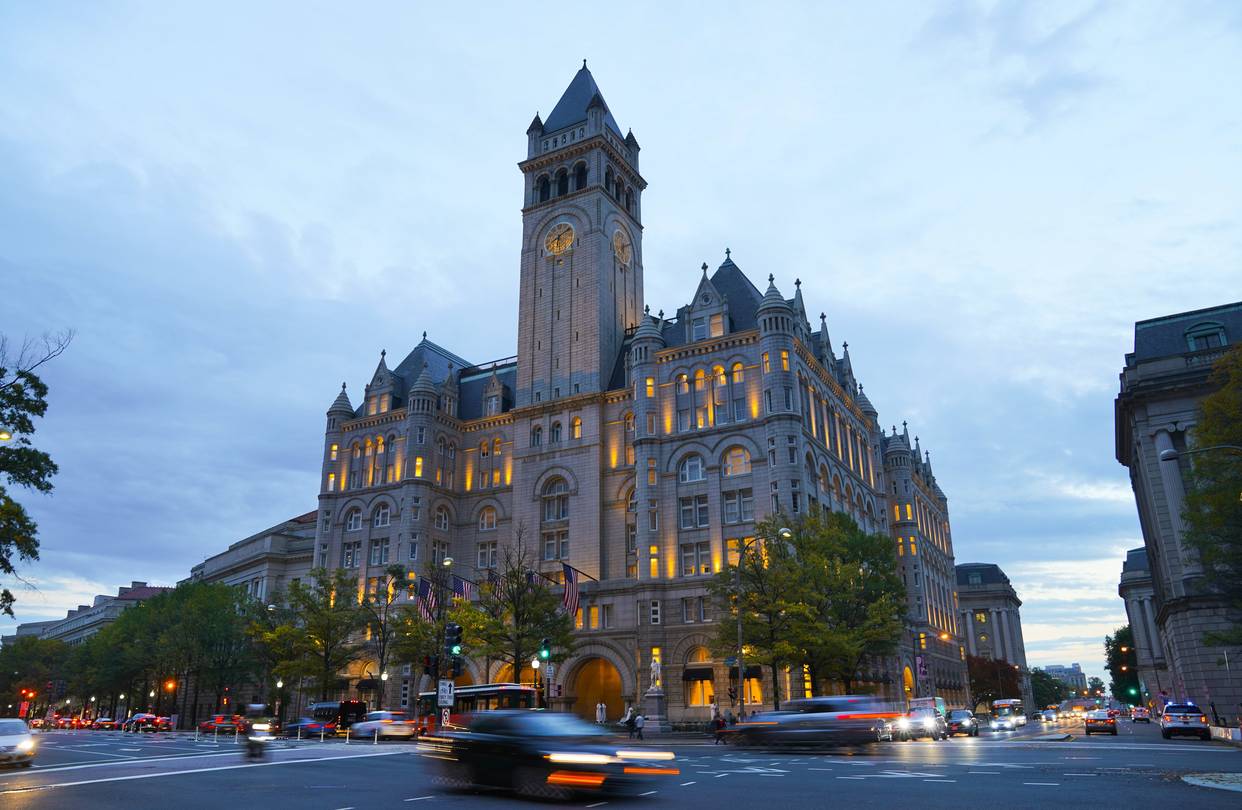 One claim alleges that the added revenues from  foreign guests who flock to this hotel for obvious reasons violates the Constitution’s emoluments clause. The emoluments clause is supposed to bar the US president from being enriched by monies from foreign dignitaries/ guests where there would be the appearance or reality that for example, foreign government officials would use their largess to curry favors, like the Saudis have done for months.

Then there’s this pesky problem where the landlord, the US government had this clause in its leasing contract which was supposed to bar it from being a party to an agreement with an elected  official of the US government.

For the president to be able to lease this property, it was necessary for the US Government Services Administration, the landlord for the old post office, now the Trump International Hotel in Washington D.C., to find that he was not violating a specific clause in his lease. The clause states, “No “elected official of the government of the United States, shall be admitted to any share or part of this lease, or to any benefit that may arise therefrom.”

It’s obvious that President Trump fits the definition of an elected official of the US government. So how did the president successfully circumvent this property contractual legal clause?

“If there was an opening act in President Trump’s quest to exploit his office for personal gain, it was the rapid turn in fortunes experienced by the Trump International Hotel in Washington’s Old Post Office after he won the presidency.”

“For that to happen, Mr. Trump needed the General Services Administration, the government’s property manager, to find he was not violating a clause in his lease. No “elected official of the government of the United States,” it says, “shall be admitted to any share or part of this lease, or to any benefit that may arise therefrom.”

“At its September opening, the hotel was a loser tied to a pariah in a deep-blue city. Its restaurant sat nearly empty; its rooms were hawked at steep discounts. After the election, everything changed. Foreign governments, corporate titans and lobbyists thronged the place: Bahrain, Azerbaijan and Kuwait moved parties from other venues to the hotel.”

“As the president-elect spun cash, Denise Turner Roth, the agency chief, saw nothing wrong. “G.S.A. does not have a position that the lease provision requires the President-elect to divest of his financial interests,” an agency spokesperson said. “No determination regarding the Old Post Office can be completed until the full circumstances surrounding the President-elect’s business arrangements have been finalized and he has assumed office.”

“As Ms. Roth left office, she tweeted: “It has been a great honor to support a smooth Presidential Transition.”

“Ms. Roth’s complaisance was mystifying. She was an outgoing Obama appointee. What did she have to lose by calling to task the Trump administration?”

“A few weeks after leaving the agency, Ms. Roth was named a senior adviser at WSP/USA, a global engineering and construction management firm whose projects include — surprise — government buildings.”

“WSP did not make Ms. Roth available for comment and emailed a statement saying she “was brought on board due to her 20 years of public service at the federal and local government levels. … As with all our professionals, she will not lobby the federal, state or local government on behalf of the firm.”

“Federal law prohibits appointees at Ms. Roth’s level from contacting their agencies for one year. “

“It’s a shame Ms. Roth didn’t exert her extensive influence to make Mr. Trump follow his legal obligations before she entered what seems like a marriage of convenience. (The president faces a lawsuit claiming that the tab from his foreign guests at the hotel violates the Constitution’s emoluments clause.)

“In March, the G.S.A.’s new Trump-appointed leadership declared the hotel in “full compliance” with the lease.”