After the Democratic Party lawmakers in the US Congress under the Obama administration passed the 2010 Patient Protection and Affordable Care Act (Obamacare), the republican lawmakers attempted to repeal this legislation numerous times  with no success.  Conservative organizations challenged Obamacare in the courts to where they managed to have this law reviewed by the US Supreme Court in 2012  but the ruling was not in their favor.”

“Then the conservatives pinned their hopes in winning the presidency in 2012, with the republican Mitt Romney, but no cigar. The Democratic Party incumbent President Barack Obama had thwarted their plans to kill Obamacare by winning a second term in the White House.”

But in 2012, there were these Tea Party conservatives who managed to gain a bigger foothold in the House of Representatives within the US Congress to where their one mission was to end Obamacare. In 2013, they came up with the idea to attach a provision to a spending bill that would have eliminated the funding necessary for the continuation of Obamacare, and if their Democratic colleagues didn’t sign off on this bill, there wouldn’t be the monies to fund the running of the US government which would cause a government shutdown. After some back and forth maneuvering between the US Senate and the US House,  it turned out that the US Congress had not passed  the laws required to fund the US government beyond September 30, 2013. A government shutdown ensued which lasted 16 days.

What occurred in 2013 bears similarities to the government shutdown political currents of today, in January 2019. After years of GOP members telling their constituents that they could easily repeal Obamacare, they had to look like they were seriously working towards this goal. Meanwhile President Obama and democratic lawmakers were not about to allow their signature legislation crafted to grant accessible, affordable, quality health insurance to millions of previously uninsured Americans, to be gutted.

As per a 10 /3/13 Forbes report, “right wing elements of the Republican Party — often referred to as the Tea Party — within the U.S. House of Representatives attached a provision to a spending bill that required eliminating funding for the implementation of the PPACA in order to fund the rest of the U.S. Federal Government.”

“That bill was sent to the U.S. Senate. The Senate then stripped out the provisions relating to defunding the PPACA, and sent it back to the House. The House then sent back a version of the bill that delayed implementation of the Act for one year, and the Senate tabled the measure and didn’t even take it up for consideration.”

“Since the U.S. Congress has not passed law to appropriate any funds past September 30, 2013, the Federal Government has “shut down.”

“Somewhat ironically, as of October 1, 2013, the health insurance exchanges created by the Act are now open for enrollment. Funding for those was already appropriated.  http://www.healthcare.gov.”

Around the 16th of October 2013, the US Congressional Republicans conceded defeat on in their bitter budget fight with President Obama over the new health care law as the House and Senate approved last-minute legislation ending a disruptive 16-day government shutdown and extending federal borrowing power to avert a financial default with potentially worldwide economic repercussions.

On October 3, 2013, Jena McGregor of the Washington Post penned the following report, “Negotiation experts on how to end the shutdown”

“Anyone hoping for a quick and tidy shutdown fix following President Obama‘s meeting with House and Senate leaders at the White House was bound to be disappointed. Senate Majority Leader Harry Reid (D-Nev.) told reporters after the meeting late Wednesday that “we are locked in tight on Obamacare.” Minority Leader Mitch McConnell (R-Ky.) called the meeting “cordial but unproductive.”

“But as hours turn into days, the question everyone wants an answer to is just how the government shutdown might end. Will House Speaker John Boehner (R-Ohio) cave and allow a vote on a “clean” funding bill? Will the president or Democrats weaken their current stance on negotiating over Obamacare? How long will all this go on?”

“I asked negotiation experts to take out their crystal balls and explain, using what they know about conflict resolution, the kind of exit strategy that might be used to bring the shutdown to a conclusion. How would they advise the president or the Republicans? What have other stalemates taught us?”

“First, let’s establish what kind of negotiation we’re talking about here. Calling the shutdown an “impasse” or a “standoff” implies that both sides are equally responsible for the current crisis. Rather, there is a group of Republicans trying to work outside the normal legislative process to overturn a law, and the president is refusing to negotiate to prevent setting such a precedent. Still, the fact remains that “there is a power struggle going on,” as William Ury, co-author of negotiation bible “Getting to Yes,” said. The two sides have dug in, the little talk that is happening is caustic and ineffective, and the ideological principles dividing the groups aren’t about to change overnight. “The question is how is this power struggle going to be resolved?”

“Most of the experts I spoke with agreed on 3 things:”

“This is likely to get worse before it gets better.”

“The president might choose not to negotiate on his core principles, but he’ll still have to find a way to let Republicans save face.”

“And even if you’re dealing with hostage-takers, there’s still room to talk.” 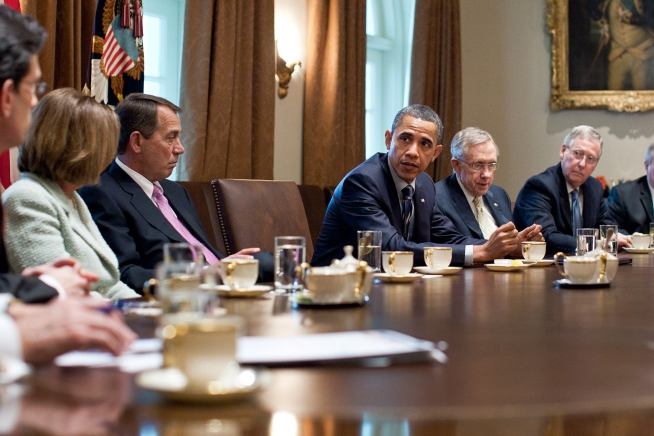 “Let’s take these one by one. Right now, however bad the shutdown may be for many people, neither Democratic or Republican leaders yet feel immediate pain from the fallout. Democrats know the polls show that Republicans are getting hit worse by the government’s closure. And Republicans aren’t yet getting heat from constituents for their hardline positions. But at some point, a shutdown—or worse, the potential of a disastrous default—could become so painful that it drives people to the negotiating table.”

“There’s a term for this in the field of conflict resolution. It’s called a “mutually hurting stalemate,” and Robert Bordone, director of the Harvard Negotiation and Mediation Clinic and a professor at Harvard Law School, thinks that’s where the shutdown fight is headed. “Until people actually feel the pain themselves, they are falling victim to psychological biases.” They’re able to convince themselves that “this might be hurting me, but it’s hurting you more.”

“Similarly, others think the only way the shutdown will get resolved is for enough constituents (not just lawmakers) to feel pain, or at least get angry, over the crisis. Robert Tobias, who teaches conflict resolution as part of his role as director of American University’s Key Executive Leadership Programs, is reminded of the quick fix   Congress  managed after sequester cuts furloughed air traffic controllers, wreaking havoc on flight delays. Given that 2.8 million people visited the federal Web site on opening day, he thinks the Affordable Care Act may get enough early adopters to change the debate.”

“But digging in their heels and waiting around for everyone to get mad enough isn’t necessarily a strategy. Seth Freeman, a professor of negotiation and conflict management at Columbia University and NYU’s Stern School of Business, says that “there’s a distinction between engagement and agreement. The subtlety here is that when you contact the other side, there’s a risk your constituents see you as going native.” That’s one problem with the current dynamic: Boehner reportedly won’t go to the table alone with Obama after some in his party tried to depose him following his fiscal cliff negotiations with the president. And now that Obama has repeatedly said he won’t negotiate over his  health care law as part of the funding bill or debt ceiling crisis, even inviting the key players to talks may be seen by some as capitulation.” 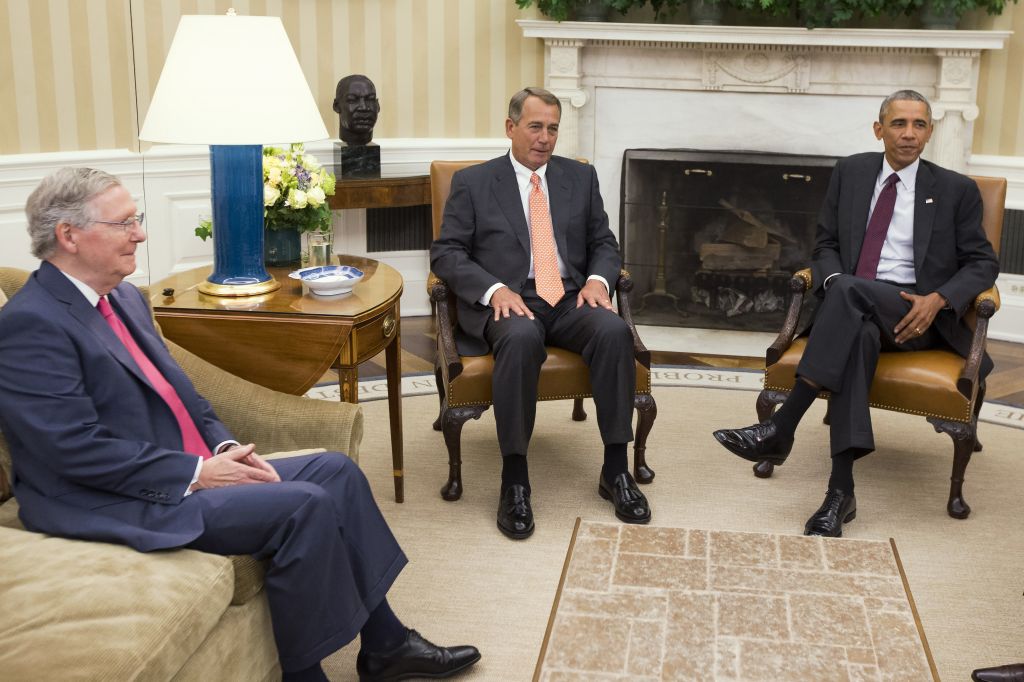 “At some point, however, the White House and Democrats will need to find a way for Republicans to “climb down out of this tree,” says Robert Mnookin, the director of the Harvard Negotiation Research Project and the author of “Bargaining with the Devil: When to Negotiate, When to Fight.” What might that golden bridge for retreat look like? Mnookin and others say there will have to be a commitment to passing a clean spending and debt ceiling bill, while simultaneously agreeing to a process that would take place afterwards to try to improve the Affordable Care Act. Note: That doesn’t mean Obama should cut a deal on the health care law to get the current crisis resolved. Bordone admits that “as a negotiation person I actually agree that the Democrats, if they relent on this, it’s the worst decision they can make strategically. It reinforces bad behavior.”

“But he and others say the president could set up a process that would take place after the first 2 crises are resolved, and which could give Republicans an out. “In my field we talk about substantive issues and process issues,” Bordone says. President Obama might say “I will as a matter of process agree to talk about substantive issues related to the health care law”—but only after the funding bill is passed and the debt ceiling is raised, Bordone suggests. In other words, set up a process, give it some teeth, and make a commitment.”

“Mnookin agrees: “The obvious deal, if I were to make a prediction, is for there to be a clean budget and a clean extension done simultaneously with an agreement that there’s going to be some bipartisan approach to improving the health care law. Nothing would be done to delay the implementation of Obamacare. … But there would be a commitment to a legislative process to rather promptly explore how the Affordable Care Act can be improved.”

“He admits, though, that such a solution would be tricky. “How can Obama credibly commit to being flexible to considering changes?” Mnookin asks. “It’s clear he’s not going to make changes that are going to gut it.” And that, of course, may very well not be enough for conservatives who have what conflict resolution types call a “expectation interest.” After years of being told by lawmakers that Obamacare can be repealed, conservative Republicans have come to expect that it can and will happen. When such an expectation interest is established, says Bordone, “you’ve created a monster. It ties the negotiators hands at the negotiation table.”

“Even when expectations are unreasonable, some real level of engagement—and listening—needs to happen. This is true whether you’re dealing with crises in the Middle East, politicians or even hostages. Ury, who has trained hostage negotiation squads, helped to broker arms control deals and advised countries on ethnic wars, says the conventional wisdom that you don’t negotiate with hostage-takers simply isn’t true. Today, he says, law enforcement officials “don’t say we don’t negotiate. They go in in a very organized way with a swat team, and they start listening,” he says. “They don’t give in on key principles, they don’t let the hostage taker go. But they’ll say ‘do you need a hot sandwich, do you want something to drink?’ And maybe they allow them to get the message across.”