No, Thank You, Partisan US Supreme Court For Being A Tool Of President’s Agenda/ Muslim Ban

Any indication that the US Supreme Court justices would attempt to avoid the appearance of not being a partisan arm of the republican President Donald Trump’s administration, was a pipe dream.

I’ve been suspicious that last US Supreme Court nominee Judge Brett Kavanaugh who had endured a high degree  of controversy but who was still pushed over the dead bodies of other equally if not more qualified conservative judges on a Federalist Society list, was so that an extreme partisan would become the 5th conservative justice to serve on the US highest court.

The results of the GOP US senators having successfully ensconced their man on the US Supreme Court is already bearing fruit with the 5 conservative justices led by its Chief Justice John Roberts, having already facilitated the president’s ban on transgender individuals serving in the US military and the ban on peoples from 5 Muslim countries entering the US for even extreme humanitarian reasons.

As per the 1/27/19 Military Times/ AP report by David Crary, “Long term, lawyers and activists battling to ensure that transgender people can serve openly in the U.S. military are convinced they will prevail. Short term, they are braced for anguishing consequences if the Trump administration proceeds with its plan to sharply restrict such service.”

“The U.S. Supreme Court, in a 5-4 vote Tuesday (1/22/19), gave the administration the green light to put the policy into effect even as legal challenges continue.”

“I’m absolutely optimistic with respect to the long-term prospects,” said Sharon McGowan, legal director of the LGBT rights group Lambda Legal, which is pressing one of the lawsuits. “The question is: How long is the long term?” 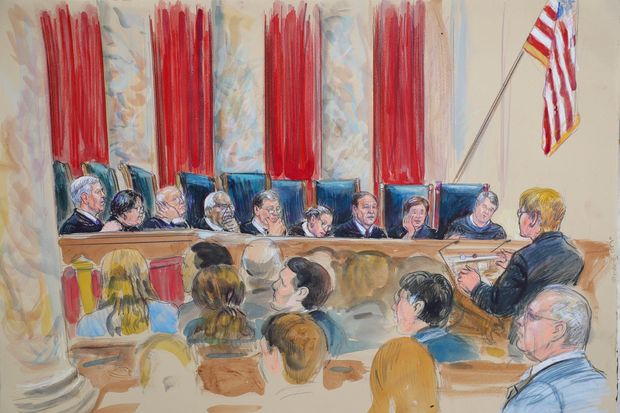 “They (transgenders) were told in 2016, in the waning months of the Obama administration, that they would be able to serve openly, then were jolted in 2017 when President Donald Trump tweeted his intention to ban all transgender people from the military.”

“They were told it’s OK to be transgender … then the rug is pulled out from under these dedicated service members,” Blevins said.”

“Yet he said activists have made major progress in convincing politicians and the public that the Trump plan is based on misinformation and prejudice.”

On January 27, 2019,  Betsy Fisher and Samantha Power, advocates for the rights of refugees penned the following op-ed piece for the New York Times, “The Trump Administration Is Making a Mockery of the Supreme Court” (“It promised to create a ‘robust’ waiver process for visa applicants from countries affected by the travel ban. The process is a sham.)

“Two years ago this week, President Trump signed an executive order banning travelers from a number of Muslim-majority countries from entering the United States. The fallout has been dire.”

“Our organization, the International Refugee Assistance Project, was among the groups that filed the first challenge to the executive order, and we won a series of injunctions temporarily blocking the ban from being enforced. But in June the Supreme Court upheld a modified version of the ban in a 5-to-4 decision. The majority sided with the Department of Justice, which had claimed that a “robust” waiver process would allow citizens from the blacklisted countries to enter the US if they met certain reasonable criteria. The Trump administration had cited this as evidence that the travel ban was rooted in national security concerns and not in the discriminatory intent to ban people on the basis of their religion.”

“This assurance was a key rationale for the court’s decision. Chief Justice John Roberts’s majority opinion argued that a waiver process would provide humanitarian exceptions to the ban and thus supported “the government’s claim of a legitimate national security interest.” However, in their separate dissents, Justice Stephen Breyer raised serious concerns about the waiver process, and Justice Sonia Sotomayor argued that it was a “sham.”

“It turns out they were right. The waiver process is opaque, arbitrary and unreasonably harsh, and it has not mitigated the ban’s effects on thousands of families in dire circumstances. It makes a mockery of the rule of law.”

“The waiver provision in the ban stipulates that those barred by their nationality from entering the United States may be granted waivers if they satisfy a three-part test: Applicants must show that being denied entry would cause “undue hardship,” that their entry would be “in the national interest” and that their entry would “not pose a threat to the national security or public safety of the United States.” But there are no published instructions as to how or where to apply for a waiver. Nor is there a form to fill out. This is in direct violation of the text of the ban, which explicitly directs the secretaries of state and of homeland security to clarify the process.”

“We have no way of knowing how many people have tried to obtain a waiver. What we do know is that the State Department has interpreted the ban’s provisions in an excessively harsh manner: Between Dec. 8, 2017 and April 30, 2018, according to the only data the administration has made available, roughly 98 percent of people who applied for a visa did not receive a waiver.”

“Thanks to the Freedom of Information Act, we know that the State Department will not even consider an applicant’s home country conditions when evaluating whether the travel ban imposes undue hardship. What this means in practice is that a Yemeni woman whose husband is in the United States cannot cite atrocities against her family or hometown as evidence of undue hardship. Some consulates even outright refuse to accept the supporting materials that applicants submit to try to prove their eligibility for a waiver.”

“The system is not just ungenerous; it is also arbitrary. Waivers appear to be given reliably only when much publicity is brought to bear. Performers in an acclaimed play enlisted international celebrities like Sting and Benedict Cumberbatch to support their waiver applications, which were eventually approved. Thanks to heavy press coverage, a Yemeni motherlonging to say her final goodbyes to her dying toddler was granted a waiver.”