So far, the Starbucks CEO Howard Schultz with his January 2019 announcement that he plans to run as a 3rd party centrist presidential candidate in 2020,  has accomplished what no one else could. He’s succeeded in uniting the Democratic Party factions to act in concert against him.

It’s my opinion that the Democratic Party’s best counter-punch would be to push for a Democratic ballot with both a progressive and a moderate candidate on it.

The big negative that I’ve observed about Mr. Schultz, is that he acts like a typical politician.

Background (How did we get here)…
Recently, I’ve come across some news reports , detailing how there are wealthy Banker/ Wall Street financiers who would like to be able to vote for an alternative presidential candidate besides the current republican President Donald Trump. What they can’t say out loud, is that they want a leader in the White House who would work to maintain their current tax structure based on the 2017 GOP tax cuts bill and who would avoid the imposition of additional regulations. But they’d prefer someone without the toxicity that President Trump brings to the table.
This alternative choice cannot run as a republican because President Trump has this lane cut off. He can’t run as a democrat because he can’t be perceived as being on the same page with some of the presidential contenders who are talking about raising taxes on the very wealthy, as that would be counter to what these Wall Street types want.
See Politico report: Wall Street freaks out about 2020

Their answer comes in the form of Starbuck’s ex-CEO Howard Schultz who could campaign as an Independent/ 3rd party centrist who would fight to maintain their current tax rates and the current state of government deregulation. I’ve come to believe that this plan was being formed before he retired from Starbucks in July, 2018, and maybe as early as mid 2017. His stepping down as CEO was announced by business new reports, around February 2017.
See: New York Times,
But as per a 2015 NY Times op-ed piece written by him, shows that he’d been thinking about the presidency.  “Despite the encouragement of others, I have no intention of entering the presidential fray. I’m not done serving at Starbucks.”

As per a 2/7/2017 Fortune report, “Starbucks Is Paying Howard Schultz An Enormous Amount of Money to Stop Being CEO” by Jen Wieczner, “Not only will he step down as CEO of Starbucks (SBUX, +1.54%) in 2 months, he’ll get to keep his paycheck.. Having taken home $21.8 million in 2016, Schultz, whose net worth is an estimated $3 billion, has long operated under a promise by Starbucks that he’ll continue to make at least as much as the company’s CEO, even if he doesn’t have to do the job anymore. Schultz himself will stay on in the newly created role of executive chairman, “focusing full-time,” he explained, on developing a chain of upscale coffee shops known as Starbucks Reserve Roasteries.”

So, from around mid 2017-2018, Howard Schultz started on his path towards the US presidency, torpedoes be damned, full speed ahead by writing his memoir From the Ground Up . Then in January, 2019, he managed to earn tons of free advertising as he figured out how to be a guest on all the TV interview shows, touting his book and his plans to be a 3rd party presidential candidate.

Possible Strategy for 270 Electoral Votes
There would be those conservative GOP Never Trumpers who might be very tempted to jump on this band wagon. Now if he could only attract some of those moderate democrats, then there are possibilities. This plan could work if democrats  ended up choosing a progressive candidate to be their standard bearer. But he would have to drive a wedge between the moderate and the more liberal factions of the Democratic Party, which he has already been doing.”

Targeting Independents would not be a promising strategy

As per the 2018 Conversation report, “According to the Gallup polling firm, the identity that people choose most often is “independent” – not Democratic or Republican. In 2017, 42 percent of Americans chose this label – up from the low 30s just 14 years ago, in 2004.”

“However, three-quarters of these “independents” admit, when asked, that they lean toward favoring the Democratic or Republican Party. Judging by how they vote or what they think of national political leaders, the truth is that these “leaners” really are partisans rather than independents. Apparently, many people who like to think of themselves as independent-minded and free of party influence just aren’t.”

“Only about 10 percent of Americans are what we call “pure independents” – that is, people who identify as independents and claim not to favor either of the two major parties. Nor has that percentage grown in recent years. This means that the vast majority of Americans – consistently around 90 percent – are partisans.” 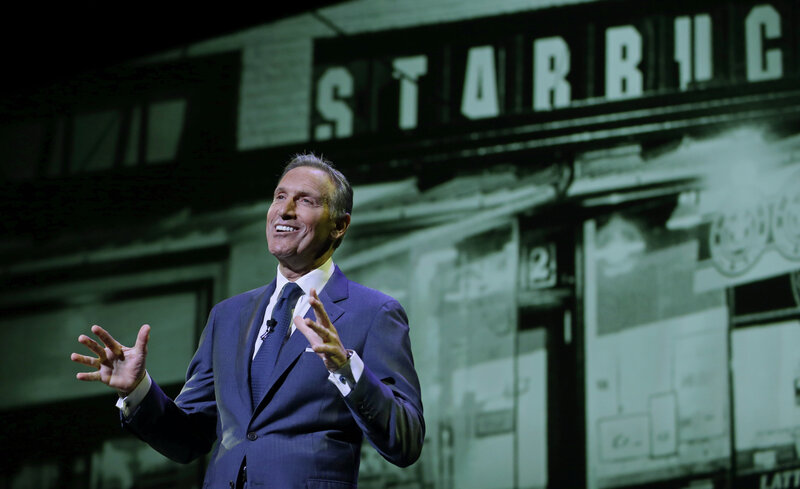 I can’t help but wonder if Mr. Schultz has considered the potential fallout to his former company since the Starbucks brand is so closely associated  with his name. Does he still have Starbucks’s stocks? The backlash to his announcement about his intent to become a 3rd party presidential candidate, has earned lots of negative press as his chances of winning as per US history is virtually nil, but he could garner enough votes to give President Trump a real chance at a second term.

On February 1, 2019, Michael Moore called for for Starbucks boycott until Howard Schultz says he’s not running for president.

As per a November 9, 2018 CNBC report by Brian Schwartz, “Former Starbucks Chairman and CEO Howard Schultz is putting together an elite public relations team as he prepares to release a civic-minded new book and considers running for president in 2020.”

“Schultz is one of the many names widely considered as a possible candidate to take on Trump in two years. In an interview with CNBC earlier this year (2018), Schultz left the door open to a run. With experience mainly in the business world but not the political arena, Schultz would likely need experienced political operators on his side if he were to dive into presidential politics. Schmidt fits that bill.”

“Schmidt got to know Schultz through Edelman’s partnership with Starbucks. The two have kept in touch since Schultz left Starbucks earlier this year, people familiar with the relationship have said. Schmidt has continued to do private consulting work for Schultz on a variety of issues.”

“Schmidt (was) a political analyst for MSNBC.”

“Amid all the denunciations of Howard Schultz’s possible third-party presidential candidacy, it’s often conceded that Schultz is “well-meaning.” After all, the billionaire appears genuinely committed to tackle what he sees as urgent problems: the need for a fair, humane immigration overhaul; the imperative of making health care available to all; the existential threat posed by climate change.” 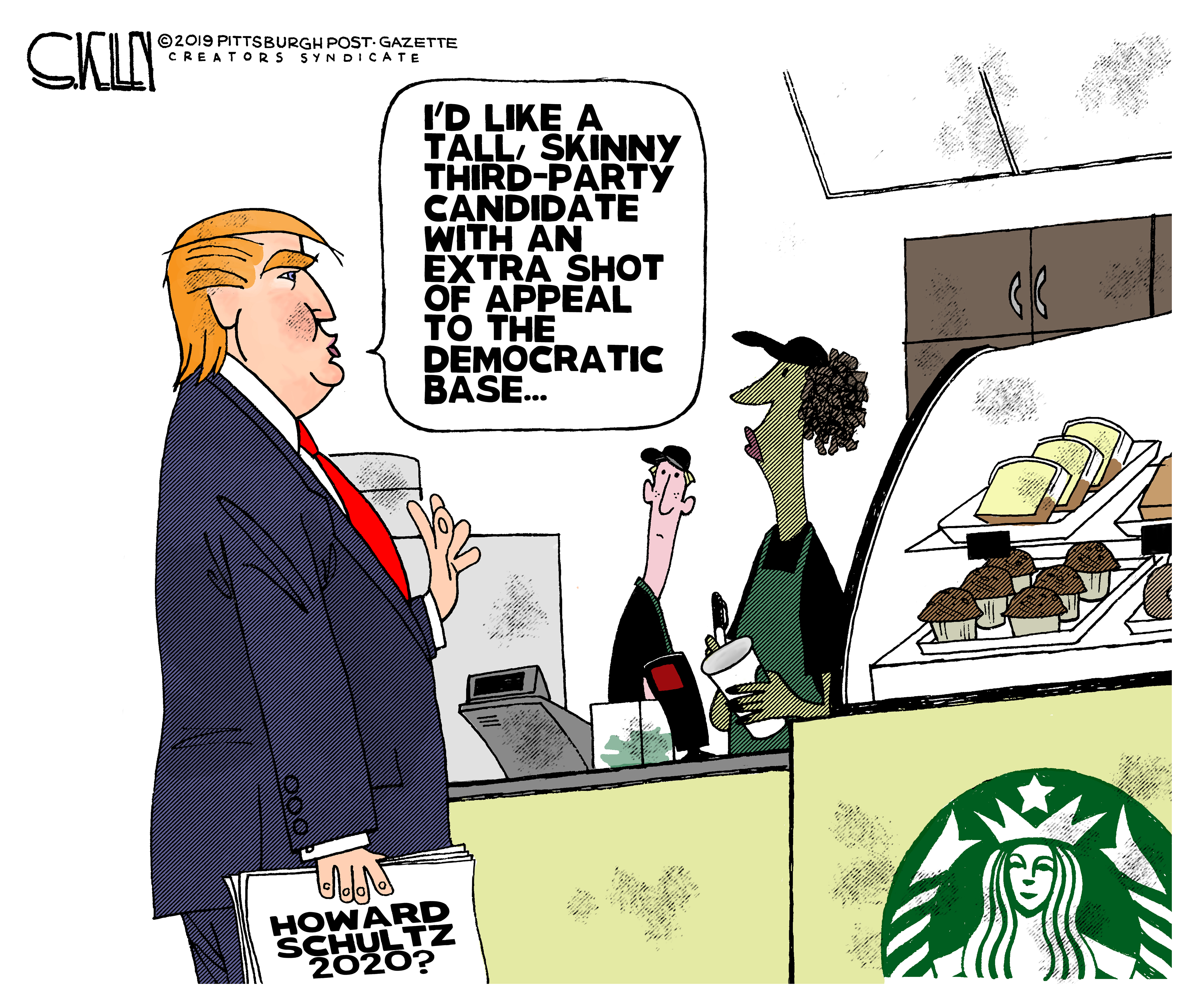 “The Post has some extraordinary new reporting that sheds fresh light on Schultz’s deliberations. The upshot: It is now empirically, provably the case that Schultz is fully cognizant of the enormity of the risk his candidacy poses. Indeed, Schultz’s own advisers have now revealed it for all to see. It’s now beyond any question that his candidacy is driven by an appalling level of cynicism and recklessness.”

“”The key revelation from The Post is that there’s a deliberate method behind Schultz’s devotion of so much of his free-media tour to attacking Democrats. As The Post reports, this represents “a core strategy his advisers have developed in recent months through extensive polling”:

“To win a majority of electoral college votes, which Schultz says would be his goal, he would have to ultimately replace the Democratic nominee as the favored choice of voters who don’t want Trump to win a second term.”

“In practice, this has led Schultz to focus far more of his initial fire on Democrats than Trump … He has particularly focused on attacking the Democratic Party’s more-liberal wing.”

“His argument has 3 components. He says “nobody wants to remove” the “unqualified” Trump “more than me.” Thus, he agrees with the majority that has concluded Trump is unfit or dangerous. He claims he’s running against the two-party system’s paralysis because of rigid partisanship, or equivalent “revenge politics” on either side.”

“And he insists he is motivated only by a fear that a too-liberal Democratic nominee could reelect Trump. “It would kill me to see President Trump be reelected,” Schultz frets, while admiring his glinting halo in the mirror.”

“But now that we know that Schultz is attacking Democrats far more often for self-interested strategic reasons, this whole argument has now been blown to smithereens from the inside.”

“Schultz worries about the deficit and claims to view Trump’s massive corporate tax cut as regressive — but hedges on whether the wealthy should pay more. Thus, he champions cuts to entitlements, which — along with his reluctance to tap the huge upward transfer of income and wealth —  undercuts his professed vow to combat poverty and soaring inequality.”

“As Brian Beutler notes, Schultz’s agenda reassures the plutocrats, by saying: Yes, a majority has rejected Trump’s racism and embrace of GOP plutocracy, but I wouldn’t convert this sentiment or this unique moment into a genuine reimagining of the social contract that would seriously disturb current distributions.”

“The majority that rejected Trump in the 2018 election did so after college-educated and suburban white voters voted Democratic in much higher numbers than before. They voted to preserve protections for people with preexisting conditions and subsidized health insurance for millions. They voted against Trump’s regressive tax cut, his horrifying cruelty toward immigrants and asylum seekers, and his proposed monument to hatred and exclusion on the southern border.”

“Schultz claims to embody that basic consensus. He wants legalization for undocumented immigrants and humane treatment of newcomers. He wants health care for all and vaguely says Trump’s tax cut was indefensibly regressive. He’s merely “warning” that Medicare-for-all and Democratic proposals for progressive tax reform go too far.”

“Yet we now know that Schultz is not offering this argument in good faith.”

‘By Schultz’s own lights, the Democratic agenda is far less extreme than the GOP one is. If he really wants universal health care, he’s far closer to the loose Democratic consensus than to the GOP’s unshakable ideological opposition to it. If he really thinks climate change has put us on a “collision course with time,” then he must agree that Trump/GOP climate denial poses an extraordinarily extreme threat.”

A big open question about 2020

“It is an open question whether the coalition that elected the Democratic House majority will deliver in 2020. The possibility that affluent whites could find themselves at odds with working-class minorities and young people about the party’s economic agenda is real.”

“Splitting off those affluent whites is Schultz’s strategic imperative. So he must focus most of his effort on casting the Democratic Party’s economic agenda as extreme. His pieties about running against extremism on both sides provide cover for that mission.”