I’ve been discussing in past blogs about who comprises the base of today’s Republican Party being made in the image of its leader President Donald Trump. These factions include White Evangelicals who are anti-abortion and anti-LGBTQ rights and who’ve been demanding conservative justices on the courts; the anti-immigration zealots, the racists, and the group of rich folks who no matter what happens, want their lower tax rates that the president and the GOP lawmakers delivered in December 2017, along with the current state of government deregulation orders in process pertaining to their businesses.

The president and the GOP lawmakers have delivered on their promises to these groups but NOT to the one faction of American blue color workers who gave President Trump a chance.

For this last group of wealthy GOP donors, they have willingly turned their backs on all things conservative like fiscal responsibility, a desire to reduce the US deficit, a belief in the ‘rule of law, a recognition of Russia as an adversary, the importance of alliances like NATO,  in return for their tax cuts and deregulation.’

This tells me that this last group would readily and knowingly support a leader in the White House who has virtually advertised that he’s a Russian asset where he has been compromising the US national security interests by having the US withdraw or threatens to withdraw from major alliances and treaties that just happen be in sync with the goals of Russia; who has taken the US out of trade deals like TPP to circumvent China’s dominance in trade; who’s been imposing tariffs on our neighbors and friends, who’s been enacting policies to even limit legal immigration and who has proven to be a decisive figure as he acts on racist impulses. The list never ends.

These wealthy individuals know about the president’s lack of due diligence regarding the welfare of this country as per his recently published schedules where he has executive time planned for 60% of the time when he’s supposed to be working.

Its been proven that he not only doesn’t listen to US intelligence agents and foreign policy experts, he discounts, dismisses whatever they say. Frequently he acts to further Russia’ interests. In his December 2018 decision to withdraw US military from Syria was done without even consulting the US Pentagon, and his decision to withdraw the US from the Intermediate-Range Nuclear Forces Treaty (INF) with Russia, was against the advice of his military and foreign policy experts. Just for the record, Russia has been cheating on this treaty for years but it was a restrictive tool where Russia could be brought back into compliance with sanctions or other punitive measures. In short, he has become for all intensive purposes, a clear and present danger to the well being and the national security interests of this USA.

It’s important to note that while these same wealthy GOP donors would sell their own mothers, to keep their current tax rates and levels of deregulation, they’d prefer to support another leader in the White House who’s committed to keeping the status quo regarding their lowered tax rates, regulation reforms and the placement of conservative justices in the federal court systems to ensure rulings favorable to corporate interests.

This is where the Starbucks ex-CEO Howard Schultz enters the scene. He offers these rich cronies, an alternative to President Donald Trump, as he would back their priorities without being so toxic regarding everything else. In addition, Mr. Schultz has a history of being competent in the business arena whereas, President Trump’s reputation is the opposite.

Because, Mr. Schultz is competent, I’ve no doubt that he has done his due diligence before making the public announcement that he’s planning to be a 2020 presidential centrist 3rd party candidate. It’s my analysis that he already knows that his chances to win the US presidency are slim to nil, and that he would increase significantly the odds of President Trump winning a second term, despite all his recent protestations, claiming otherwise.

This makes sense if he and his rich GOP donor class cronies don’t care as long as they are able to maintain their current tax cuts and deregulation levels. If Mr. Schultz can manage to form a new coalition of moderate Never Trumpers’ republicans, moderate democrats and some independents in a 3 way race where he squeaks out a victory, they keep the status quo. In the worse case scenario where President Trump wins a second term, they still keep the status quo.

“Howard Schultz’s presidential campaign opened up to mixed reviews — within the prized demographic of socially liberal, fiscally moderate billionaire moguls. (Michael Bloomberg expressed disapproval, while Schultz himself expresses strong enthusiasm.) Every other demographic category has registered a catastrophically negative response. Change Research found Schultz’s favorable rating among the public is 4 percent, with 40 percent viewing him unfavorably, and the rest not knowing who (he) is.”

“The poll even tested prompting respondents with favorable descriptions of Schultz — “Howard Schultz is a true American success story … He believes that the system is broken and there are extremists on both sides, and only an independent centrist can solve the problems that Republicans and Democrats refuse to fix.” — which nonetheless failed to coax more than 9 percent of the public to express support for Schultz’s campaign against any opponent. The polling still found that Schultz’s dismal percentage of support was nonetheless enough to swing the election to Donald Trump against most possible Democratic opponents. So it’s simultaneously true that almost nobody likes Schultz and that he could pull enough votes to reelect Trump.”

“Perhaps in an effort to push back against this data, Schultz’s team released very partial  internal polling data. Somewhat suspiciously, the data didn’t show what information the respondents were given about Schultz, to possibly prompt them to support him. The bottom-line figures showed Schultz drawing a whopping 17 percent of the national vote in a three-way race with Trump and either Kamala Harris or Elizabeth Warren. The same figures showed Trump beating both Democrats 33 to 32 percent.”

“In other words, Schultz’s own polling indicates he would lose badly, and would throw the race to Trump. The independent polling is even worse.”

“Partisan Republicans have supplied one of the few sources of support for Schultz’s candidacy. The Wall Street Journal has an editorial praising Schultz and attacking his Democratic critics for being afraid of his as-yet hypothetical ideas. “They seem to fear a policy debate,” sneers the editorial, which at no point contemplates even the possibility that Democrats actually fear Schultz’s spoiler potential. Schultz approvingly tweeted out the editorial.”

“Fox News reports that Schultz “told advisors that he was shocked by the stridency of the attacks made by Democrats,” a fact that, if true, would indicate an ignorance of the political system so proud it would be disqualifying. In case he hasn’t been following this closely, lots of people really want to defeat Trump and really don’t want to open up a window for a historically unpopular president with a strong base but very low ceiling of approval to squeak through a split electorate with a minority of the vote.” 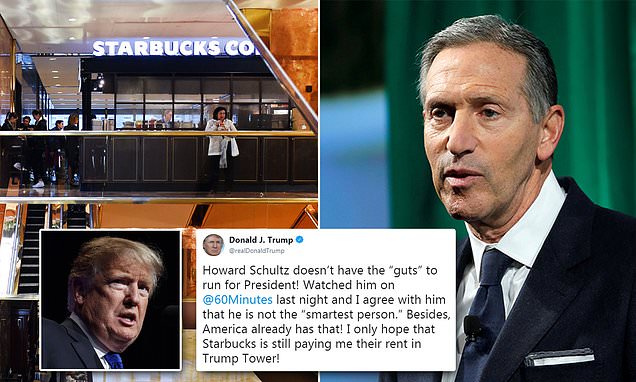 “Apparently Schultz expected his announcement to go over like the rollout of a new seasonal coffee flavor. Turns out people really dislike this Trump guy and don’t want some wealthy political tourist wandering into a political war they’ve been devoting every waking hour to winning! Who knew?”

Link to article “Political Moderation Needs to Be Saved From the Madness of Howard Schultz”  by nymag.com/intelligencer…