Another tell-all book is about to get a lot of media attention. The author is that Acting FBI Director Andre McCabe who took over the position from the Director James Comey who was fired in May 2017 by the republican President Donald Trump. He became the FBI’s Acting Director.

There are those who would like to discredit Mr. McCabe’s story base on a critical report by the Department of Justice’s Inspector General who described Mr. McCabe as being less than candid when being questioned about certain actions.

I look at his last year as FBI Acting Director as an extraordinary moment in time and I’m prone to believe an FBI career man who rose through the ranks because of his competency and overall decency.

It is obvious from the below details as shared by Mr. McCabe, that President Trump despised him and wanted him gone. So about a year after his boss, FBI Director James Comey was fired, Mr. McCabe was also shown the exit door in a way that revealed fully the president’s vindictive, mean spirited nature.

Here’s the rest of this hair raising story…

On February 14, 2019, of the Atlantic published a report by Andrew G. McCabe, “Every Day Is a New Low in Trump’s White House.” (“The president steps over bright ethical and moral lines wherever he encounters them. Everyone in America saw it when he fired my boss. But I saw it firsthand time and time again.”)

Andrew McCabe shares some of what is in his soon to be published book, “The Threat.”

“He (President Trump) went on: I received hundreds of messages from FBI people—how happy they are that I fired him. There are people saying things on the media, have you seen that? What’s it like there in the building?”

“This is what it was like: You could go to any floor and you would see small groups gathering in hallways, some people even crying. The overwhelming majority liked and admired Director Comey—his personal style, the integrity of his conduct. Now we were laboring under the same dank, gray shadow that had been creeping over Washington during the few months Donald Trump had been in office.”

“I didn’t feel like I could say any of that to the president on the phone. I’m not sure I would have wanted to say it to him in person, either—or that he would have cared. I told him that people here were very surprised, but that we were trying to get back to work”.

“The president said he thought most people in the FBI voted for him—he thought 80 percent. He asked me again, as he had in his office, if I knew that Comey had told him three times that he was not under investigation. Then he got to the reason for his call. He said, I really want to come over there. I want to come to the FBI. I want to show all my FBI people how much I love them, so I think maybe it would be good for me to come over and speak to everybody, like tomorrow or the next day.” “That sounded to me like one of the worst possible things that could happen. He was the boss, and had every right to come, but I hoped the idea would dissipate on its own. He said, Why don’t you come down here and talk to me about that later?”

“After we agreed on a time to meet, the president began to talk about how upset he was that Comey had flown home on his government plane from Los Angeles—Comey had been giving a speech there when he learned he was fired. The president wanted to know how that had happened.”

“I told him that bureau lawyers had assured me there was no legal issue with Comey coming home on the plane. I decided that he should do so. The existing threat assessment indicated he was still at risk, so he needed a protection detail. Since the members of the protection detail would all be coming home, it made sense to bring everybody back on the same plane they had used to fly out there. It was coming back anyway. The president flew off the handle: That’s not right! I don’t approve of that! That’s wrong! He reiterated his point five or seven times.”

“I said, I’m sorry that you disagree, sir. But it was my decision, and that’s how I decided. The president said, I want you to look into that! I thought to myself: What am I going to look into? I just told you I made that decision.”

“The ranting against Comey spiraled. I waited until he had talked himself out.”

“Toward the end of the conversation, the president brought up the subject of my wife. Jill had run unsuccessfully for the Virginia state Senate back in 2015, and the president had said false and malicious things about her during his campaign in order to tarnish the FBI. He said, How is your wife? I said, She’s fine. He said, When she lost her election, that must have been very tough to lose. How did she handle losing? Is it tough to lose?”

“I replied, I guess it’s tough to lose anything. But she’s rededicated herself to her career and her job and taking care of kids in the emergency room. That’s what she does.”

“He replied in a tone that sounded like a sneer. He said, “Yeah, that must’ve been really tough. To lose. To be a loser.” 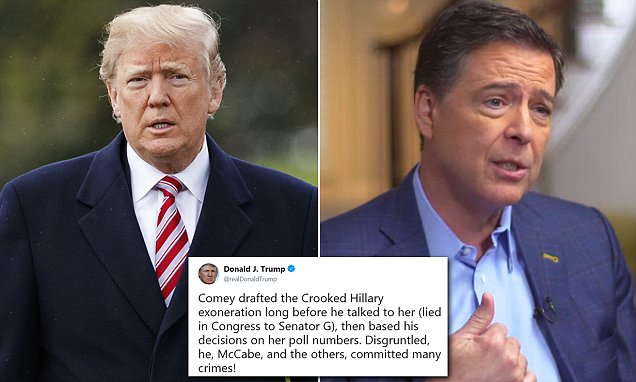 “I wrote a memo about this conversation that very day. I wrote memos about my interactions with President Trump for the same reason that Comey did: to have a contemporaneous record of conversations with a person who cannot be trusted.”

“People do not appreciate how far we have fallen from normal standards of presidential accountability. Today we have a president who is willing not only to comment prejudicially on criminal prosecutions but to comment on ones that potentially affect him. He does both of these things almost daily. He’s not just sounding a dog whistle. He is lobbying for a result. The president has stepped over bright ethical and moral lines wherever he has encountered them. Every day brings a new low, with the president exposing himself as a deliberate liar who will say whatever he pleases to get whatever he wants. If he were “on the box” at Quantico, he would break the machine.”

“After Comey’s firing, the core of my concern had to do with what might happen to the Russia case if I were to be removed. I convened a series of meetings about that investigation—including the one interrupted by the call from the president—in which I directed an overall review of every aspect. Was the work on solid ground? Were there individuals on whom we should consider opening new cases? I wanted to protect the Russia investigation in such a way that whoever came after me could not just make it go away.”

“As requested, I went back to the White House that afternoon. The scene was almost identical to the one I had walked into the previous night. Trump was behind the Resolute desk. He lifted one arm and jutted it out, fingers splayed, directing me to take a seat in one of the little wooden chairs in front of him. Reince Priebus, then the chief of staff, and Don McGahn, then the White House counsel, were in the other chairs.”

“The president launched back into his speech about what a great decision it was to fire Jim Comey, how wonderful it was that the director was gone, because so many people did not like Comey, even hated him—the president actually used the word hate.”

“Eventually he changed the subject. He said that he wanted to come to FBI headquarters to see people and excite them and show them how much he loves the FBI. He pressed me to answer whether I thought it was a good idea. I said it was always a good idea to visit. I was trying to take some of the immediacy out of his proposal—to communicate that the door was always open, so that he wouldn’t feel he had to crash through it right away.”

“He looked at Don McGahn. The president said, Don, what do you think? Do you think I should go down to the FBI and speak to the people?”

“McGahn was sitting in one of the wooden chairs to my right. Making eye contact with Trump, he said, in a very pat and very prepared way, If the acting director of the FBI is telling you he thinks it’s a good idea for you to come visit the FBI, then you should do it.”

“Then McGahn turned and looked at me. And Trump looked at me and asked, Is that what you’re telling me? Do you think it’s a good idea?”

“It was a bizarre performance. I said it would be fine. I had no real choice. This was not worth the ultimate sacrifice.”

“In this moment, I felt the way I’d felt in 1998, in a case involving the Russian Mafia, when I sent a man I’ll call Big Felix in to meet with a Mafia boss named Dimitri Gufield. The same kind of thing was happening here, in the Oval Office. Dimitri had wanted Felix to endorse his protection scheme. This is a dangerous business, and it’s a bad neighborhood, and you know, if you want, I can protect you from that. If you want my protection. I can protect you. Do you want my protection? The president and his men were trying to work me the way a criminal brigade would operate.” “For whatever reason, the visit to the FBI never happened.”

One of the regularly scheduled meetings with the attorney general, deputy attorney general, and some of their staff came two days later, on Friday, May 12. After the meeting, I asked the deputy, Rod Rosenstein, if he could stay behind. In part I wanted to talk with him about ground rules governing the separate investigations of the Russia case by the FBI and the Senate Intelligence Committee. Rosenstein had oversight because the attorney general, Jeff Sessions, had had to recuse himself owing to his own interactions with Russians during the campaign. But my main message was this: I need you to protect the process.

“After speaking to these points, Rod shifted his gaze. His eyes were focused on a point in space a few yards beyond and behind, toward the door. He started talking about the firing of Jim Comey. He was obviously upset. He said he was shocked that the White House was making it look as if Jim’s firing had been his idea. He was grasping for a way to describe the nature of his situation. One remark stands out. He said, There’s no one that I can talk to about this. There’s no one here that I can trust.”

“He asked for my thoughts about whether we needed a special counsel to oversee the Russia case. I said I thought it would help the investigation’s credibility. Later that day, I went to see Rosenstein again. This is the gist of what I said: I feel strongly that the investigation would be best served by having a special counsel. Unless or until you make the decision to appoint a special counsel, the FBI will be subjected to withering criticism that could destroy the credibility of both the Justice Department and the FBI.”