The republican President Trump has been busy not only creating his own daily reality show based on his warped version of the truth but he’s also been scratching his vindictive nature by siccing his justice department on his nemesis, his 2016 democratic Party opponent Hillary Clinton.

There’s this conspiracy theory regarding Hillary Clinton’s involvement in a Uranium One deal when she was the Secretary of State that has been debunked by no less than FOX TV News and other credible fact checking web sites. But this reality based on facts, evidence does not match what President Trump wants to be the truth and so, he acts on the assumption that it’s his truth that counts. It turns out the president’s lackey that he appointed to be a temporary Acting General Attorney Matt Whitaker did follow the president’s orders by delivering a letter to the Utah U.S. attorney directing a review of how the US Department of Justice (DOJ) handled the Clinton Foundation and the Uranium One issues.

Imagine this! The US Department of Justice has been denying the existence of this letter until after it became obvious that Mr. Whitaker was leaving his post. Then mysteriously, this letter had been discovered.

After it claimed no such document existed, the Justice Department just unearthed a letter Matt Whitaker delivered to the Utah U.S. attorney directing a review of how the department handled the Clinton Foundation and the Uranium One issues.

“Then-Attorney General Jeff Sessions wrote the letter on Nov. 22, 2017 for Utah U.S. Attorney John Huber. Matt Whitaker, who was Sessions’ chief of staff at the time, emailed the letter to Huber that day, writing, “As we discussed.” He also sent Huber a copy of a letter the Justice Department’s Congressional affairs chief sent to the chairman of the House Judiciary Committee on Nov. 13 of that year.”

“The existence of a letter documenting Sessions’ directive that the DOJ revisit probes of Trump’s top political foe is a surprise because a department lawyer said in court last year that senior officials insisted it didn’t exist. The liberal nonprofit American Oversight obtained the letter through a Freedom of Information Act (FOIA) request they filed on Nov. 22, 2017––the same day Whitaker emailed Sessions’ letter to Huber.”

“The request asked for documentation of the directions Sessions gave Huber about the review of the Clinton investigations. After DOJ failed to produce any written directions, American Oversight sued.”

“And on Nov. 16, 2018, Senior Counsel in the Office of Information Policy Vanessa Brinkmann, who handles FOIA Requests, said a lawyer in Sessions’ office told her no such letter existed. That lawyer spoke with Huber and Whitaker, she said in a declaration filed in federal court, and then told her that “when the Attorney General directed Mr. Huber to evaluate these matters, no written guidance or directives were issued to Mr. Huber in connection with this directive, either by the Attorney General, or by other senior leadership office staff.”

“That wasn’t correct. On Wednesday (3/6/19) of last week, a DOJ lawyer told American Oversight that they had found the document that kicked off Huber’s work.”

“The letter, which American Oversight provided to The Daily Beast, is consistent with what the DOJ’s chief of legislative affairs has told Congress: that Huber is scrutinizing the sale of a Canadian uranium mining company with interests in the United States to Rosatom, a Russian state-owned company. Republicans have long alleged that then-Secretary of State Hillary Clinton declined to oppose the deal because of contributions to the Clinton Foundation.”

“The DOJ hasn’t brought any charges related to the foundation or the transaction. Some Hill Republicans and conservative media commentators have long argued this is because the Department hasn’t sufficiently investigated it. They have called for the appointment of a special counsel to scrutinize the transaction.”

“Sessions didn’t bite. Instead, he directed Huber to review what the Department had done regarding the matter. Huber’s work has drawn significant interest but—unlike Special Counsel Robert Mueller’s probe into Russian influence during the 2016 election—there is scant public information about what fruits, if any, it has borne.”

“‘Lock her up’ was wrong at campaign rallies, and it’s even worse coming from the Department of Justice,” said Austin Evers, who heads American Oversight. “Even after this long, it’s still deeply shocking to see the black and white proof that Jeff Sessions caved to President Trump’s worst authoritarian impulses and ordered a wide-ranging investigation of his political opponents based on demands from Congress instead of the facts and the law.” 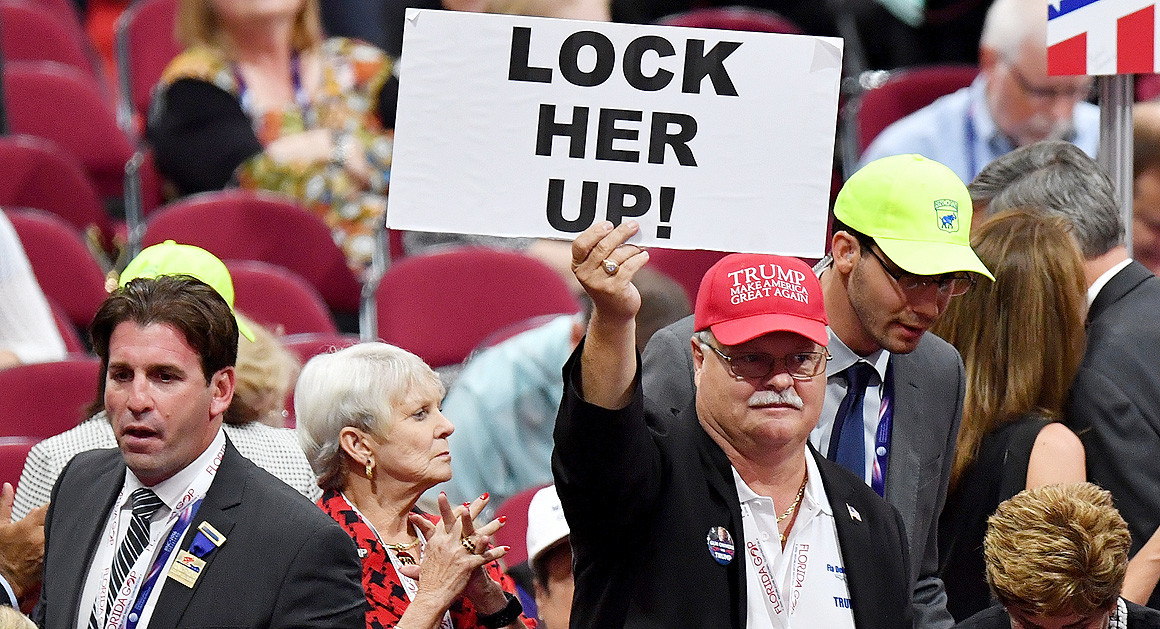 “It strains credulity to believe that the Justice Department didn’t know about this letter when they swore under penalty of perjury that it didn’t exist–you don’t exactly forget about a formal directive to investigate Hillary Clinton signed by Jeff Sessions,” he added.

“The fact that they only ‘found’ it the same week Matthew Whitaker was heading for the exit makes it hard to see DOJ’s previous denial as anything but a deliberate attempt to conceal the extent to which President Trump’s authoritarian demands were being put into action. The authoritarian instinct in the Trump administration needs to be investigated. Sessions and Whitaker shouldn’t escape accountability by skipping town.”