On the evening of the 2nd of February 2019, Chicagoan voters saw their first female African-American Democratic Party candidate, Lori Lightfoot become its mayor.

“Lori Lightfoot won a resounding victory Tuesday (4/2/2019) night to become both the first African-American woman and openly gay person elected mayor of Chicago, dealing a stinging defeat to a political establishment that has reigned over City Hall for decades.”

“After waging a campaign focused on upending the vaunted Chicago political machine, Lightfoot dismantled one of its major cogs by dispatching Cook County Board President Toni Preckwinkle, whose candidacy had been hobbled in part by an anti-incumbent mood among voters and an ongoing federal corruption investigation at City Hall.”

“Lightfoot’s campaign, which started last May as a long-shot bid to replace the city’s clouted politics with inclusive change, took the former federal prosecutor and first-time candidate from toiling in relative political obscurity to toppling the head of the Cook County Democratic Party.”

“Today, you did more than make history,” Lightfoot told hundreds of supporters at the Hilton Chicago on Tuesday night. “You created a movement for change.”

“With roughly 97 percent of the city’s precincts reporting, Lightfoot had swept all 50 of Chicago’s wards, winning 74 percent of the unofficial vote to 26 percent for Preckwinkle, a 28-year officeholder who prior to her eight years as the county’s chief executive served 19 years as a Hyde Park alderman.”

“Lightfoot will be sworn in as Chicago’s 56th mayor on May 20 while Preckwinkle will return to her third term running the county after a humiliating defeat that included losing her own 4th Ward by 20 points.”

“This may not be the outcome we wanted, but while I may be disappointed, I’m not disheartened,” Preckwinkle told supporters at a Hyde Park nightclub. “For one thing, this is clearly a historic night. Not long ago, two African-American women vying for this position would have been unthinkable.” 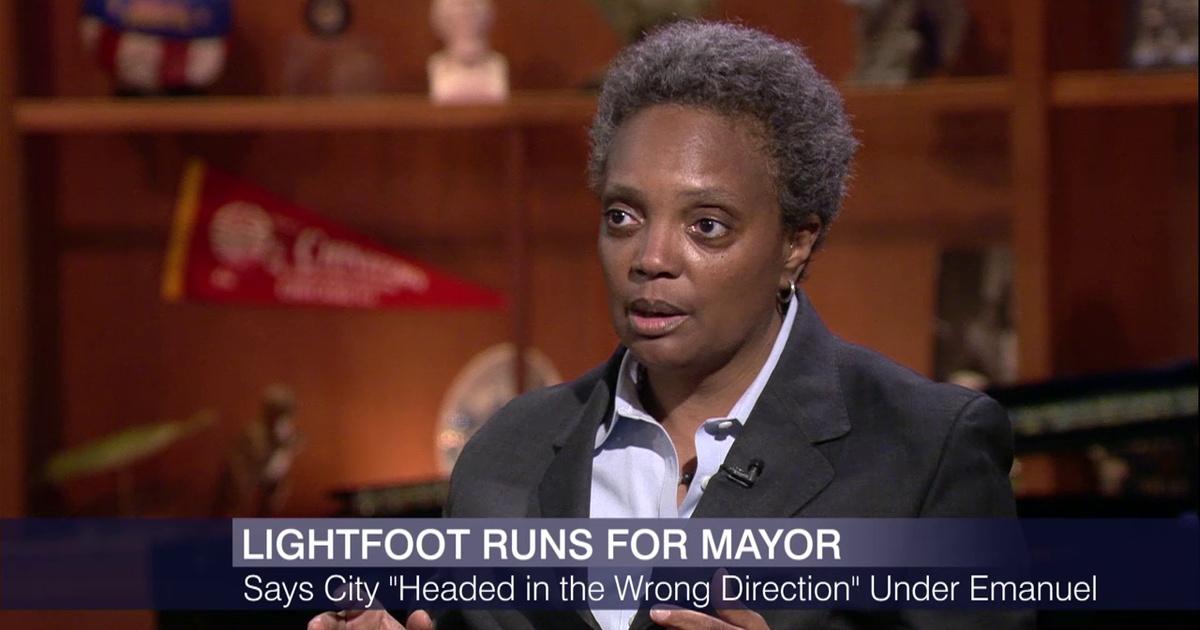 “Tuesday night’s results marked the culmination of an improbable journey for Lightfoot, from the diminutive daughter of poor parents who worked multiple low-wage jobs in the segregated steel town of Massillon, Ohio, to graduate of the University of Michigan and the University of Chicago Law School, to federal prosecutor, major law firm partner and now mayor-elect of America’s third-largest city.”

“Lightfoot will become the third African-American to serve as mayor. Harold Washington was elected in 1983 as the city’s first black mayor and won re-election in 1987 before dying in office later that year. Eugene Sawyer, the city’s second black mayor, was appointed to serve out Washington’s term until a 1989 special election.” 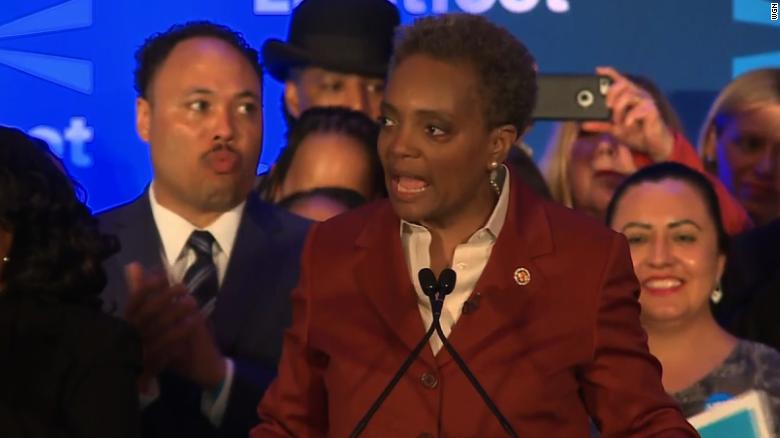 Lightfoot is just the second woman elected as mayor, following Jane Byrne, who served one term from 1979 to 1983, and the first person elected Chicago mayor not born in the city since Anton Cermak took office in 1931. While she didn’t mention it frequently on the campaign trail, Lightfoot’s win also makes Chicago the largest U.S. city ever to elect an openly gay mayor.” 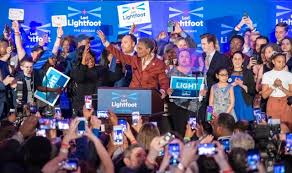 “Both self-styled progressives, Preckwinkle and Lightfoot didn’t disagree much on the issues, including advocating for more affordable housing, reforming the Police Department and driving more city resources to economically starved neighborhoods. As a result, the race largely boiled down to change versus experience.”

Preckwinkle repeatedly argued mayor “is not an entry level position” and cast her opponent as unprepared for the job while Lightfoot stressed her independence and desire to put an end to the “corrupt, broken Democratic machine.”

In the end, Lightfoot’s message prevailed in a landslide.

“At the outset, the 2019 race centered on whether polarizing Mayor Rahm Emanuel could win a third term after a tumultuous eight years in office headlined by the Laquan McDonald police shooting scandal.”

“By late summer, Emanuel had raised $10 million toward his re-election campaign but faced a field of 12 challengers, including Lightfoot. The mayor had appointed the attorney to two oversight positions, but Lightfoot frequently criticized the mayor for not doing enough to reform a Police Department tainted with excessive force and misconduct allegations amid the fallout of the McDonald shooting that ultimately led to former Officer Jason Van Dyke being convicted of second-degree murder.”

“In September, Emanuel decided he didn’t want to go through with a bruising campaign against a large field of challengers and made the stunning announcement that he would not seek a third term.”

“Four bigger-name establishment candidates quickly jumped into the race, including Preckwinkle, who was in the midst of running for her third term as County Board president. With Emanuel out, Lightfoot worked to recalibrate her campaign, but she struggled to raise money and get her message through a crowded field that now included Preckwinkle, former U.S. Commerce Secretary Bill Daley, state Comptroller Susana Mendoza and former City Hall operator and school board President Gery Chico.”

“Lightfoot, however, caught her break on Nov. 29, when FBI agents raided the City Hall and ward offices of the longest-serving alderman in Chicago’s history, Edward Burke. About a month later, federal authorities charged the 50-year incumbent with attempted extortion.”

“Suddenly, the former federal prosecutor’s campaign for change drew renewed attention and her message of ushering the status quo out of City Hall gained traction. Preckwinkle, Mendoza, Daley and Chico soon were dubbed the “Burke Four” for their ties to the longtime alderman.” 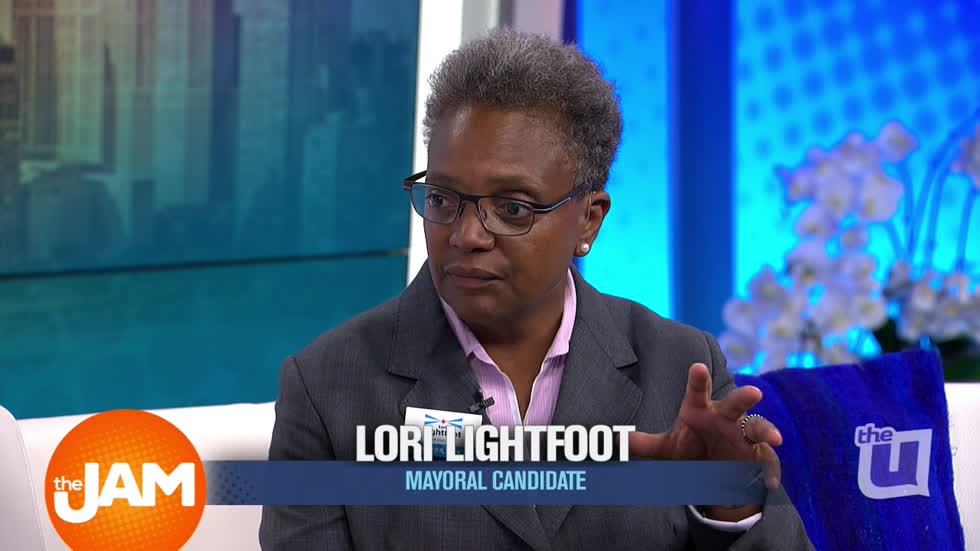 “Just before the Feb. 26 first-round election, Lightfoot raised enough money to air a late TV ad in which she flipped on a light switch in a shadowy backroom while pointing out how the four candidates were tied to Burke, promising an independent City Hall and debuting her campaign slogan, “Bring in the Light.” Remarkably, she won the February race with 17 percent of the vote with a small grassroots campaign organization and far less money than the establishment candidates”.

“Preckwinkle moved on, too, but her political brand had been badly damaged by the Burke scandal. When federal authorities charged the alderman, they revealed Burke’s alleged shakedown included illegally soliciting a $10,000 campaign contribution that the Tribune reported had been intended for Preckwinkle.”

All of it fueled Lightfoot’s contention that only she would transform City Hall while Preckwinkle would bring more of the “same old same old.”

“In an open-seat race, Lightfoot painted Preckwinkle as the de facto incumbent, often putting the longtime politician in the awkward position of defending business as usual at City Hall.” 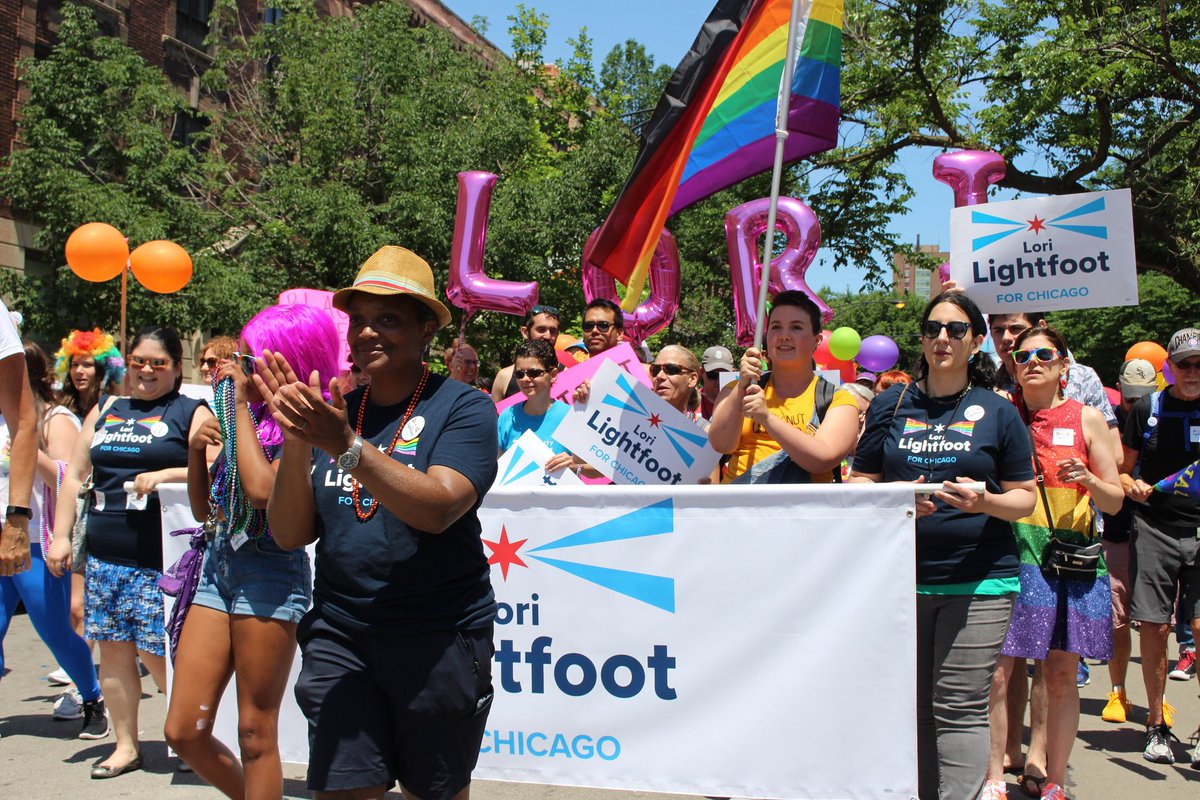 “The prime example became Lightfoot and Preckwinkle’s disagreement over so-called aldermanic privilege or prerogative, in which aldermen have veto power of zoning and permitting decisions in their wards. That power played a key role in the charge against Burke, who has been accused of holding up a permit for the owner of major fast-food chain in his ward in exchange for the business owner giving property tax appeals business to Burke’s law firm.”

“Lightfoot called for an end to aldermanic privilege while Preckwinkle, a former alderman, defended the practice and said instead council members shouldn’t be allowed to hold outside jobs.”

“Lightftoot never wavered from her message of changing City Hall, but campaigning and governing are two different enterprises. As Preckwinkle frequently reminded her opponent during the campaign, “Change is not easy.” 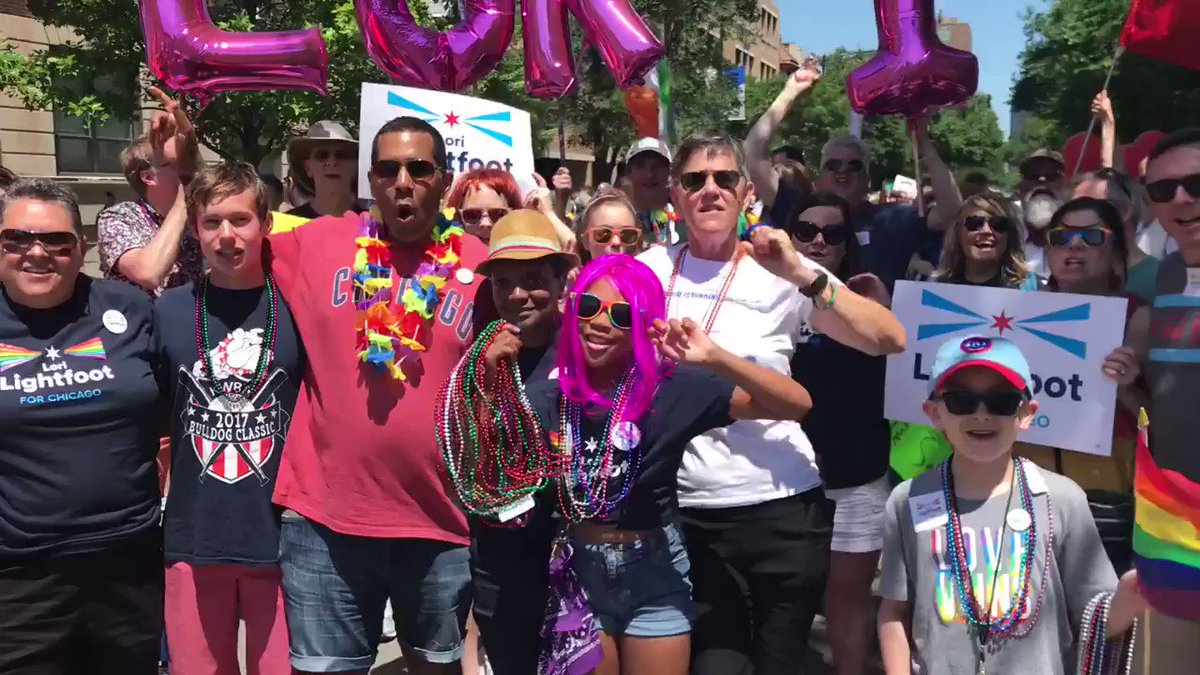 As such, there will be plenty of entrenched interests and aldermen eager to maintain business as usual at 121 N. LaSalle St., but Lightfoot seemed eager for the brewing fight.

“The machine was built to last. … There are a lot of people who are very, very happy with the status quo, who have profited in every conceivable way, so they’re not going to give up power easily,” Lightfoot said Tuesday afternoon as she left a Woodlawn church that serves as a polling place. “I’ve heard lots of rumblings of, ‘We’re going to teach her if she gets elected.’

Chicago’s historic election: Lori Lightfoot appears to have swept all 50 wards in the city’s mayoral race »