I’ve made my decision. My top choice to be the Democratic Party 2020 presidential candidate is Mayor Pete Buttigieg. On the 14th of April 2019, he officially threw his hat in the ring to compete for the big prize. This is a case where the timing is perfect.

I’ve been tweeting different versions of the following:

Mayor Pete Buttigieg has military + executive experience. He’s actually smart and deliberate in his thinking. He exudes decency. Even his being gay is a plus, as he fits progressives’ need for minority president which wb difficult for a white dude. He’s perfect Trump antidote.

Religious, Civic and other memberships:

As per Wikipedia: Other interesting tidbits:

“Peter Paul Montgomery Buttigieg born January 19, 1982 is a former Naval Intelligence Officer. Buttigieg served as an intelligence officer in the United States Navy Reserve from 2009 to 2017, attaining the rank of lieutenant and deploying for the War in Afghanistan in 2014.”

“Buttigieg is a graduate of Harvard University and Oxford University having attended Pembroke College, Oxford on a Rhodes Scholarship. “

“Buttigieg was first elected mayor of South Bend in 2011 and was reelected in 2015. During his time as mayor of South Bend, Buttigieg’s policies were widely credited with spurring economic growth and business investment. In 2013 he won GovFresh‘s Mayor of the Year award.”

“Buttigieg was named a 2014 Aspen Institute Rodel Fellow. He was named a recipient of the John F. Kennedy New Frontier Fenn Award in 2015.”

“Buttigieg is a devout Christian, and has said his faith has been a strong influence on him. Although he was baptized a Roman Catholic as an infant in deference to his strongly religious Maltese relatives, and sent to Catholic schools, his parents were infrequent churchgoers.] While at Oxford, Buttigieg began to attend Christ Church, and says he felt “more-or-less Anglican” by the time he returned to South Bend. St. Augustine, James Martin, and Garry Wills are among his religious influences. A member of the Episcopal Church, Buttigieg is a congregant at the Cathedral of St. James in downtown South Bend.”

“Buttigieg is a polyglot. He taught himself to speak Norwegian and is also conversational in Spanish, Italian, Maltese, Arabic, Farsi, and French. Buttigieg plays guitar and piano, and in 2013 performed with the South Bend Symphony Orchestra as a guest piano soloist.”

“In a June 2015 essay in the South Bend Tribune, Buttigieg announced that he is gay. He is the first openly gay municipal executive in Indiana.”

“He is married to Chasten Buttigieg (né Glezman). In December 2017, Pete announced his engagement to Chasten, a junior high school teacher whom Pete had been dating since August 2015 after meeting on the dating app Hinge. They were married on June 16, 2018, in a private ceremony at the Cathedral of St. James. They live in the same South Bend neighborhood where Pete grew up, with their two rescue dogs.”

“Pete Buttigieg, the young Midwestern mayor whose presidential bid has been an unlikely early focus of attention from Democratic voters and donors, kicked off his campaign on Sunday and proclaimed his hometown’s revival was the answer to skeptics who ask how he has the “audacity” to see himself in the White House.”

“At a rally inside a partly rebuilt factory, once owned by the automaker Studebaker and now being turned into glass-sheathed offices for tech and other businesses, Mr. Buttigieg said, “I ran for mayor in 2011 knowing nothing like Studebaker would ever come back, but that we would, our city would, if we had the courage to reimagine our future.”

“If elected, Mr. Buttigieg, a 37-year-old Rhodes scholar and veteran of the war in Afghanistan, would represent a series of historic firsts: the youngest president ever and the first who is openly gay.” 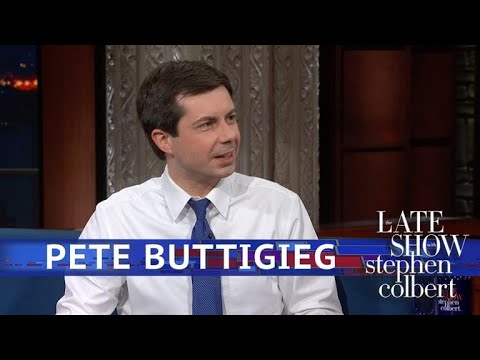 “He said he was motivated to run despite his youth because of an urgency to correct the course of the Trump administration on climate change, health care and immigration. “This is one of those rare moments between whole eras in the life of our nation,” Mr. Buttigieg said, adding, “The moment we live in compels us to act.’’

“He painted a picture of a hopeful future rooted in Midwestern values, contrasting his focus on a better life in 2030, 2040 and 2054 — the year he would be the same age as President Trump is today — with what he called Mr. Trump’s appeal to “resentment and nostalgia.”

“And he invoked his marriage to his husband, Chasten Buttigieg, as one of the blessings of American freedom, but one that feels fragile in the current climate.”

“Our marriage exists by the grace of a single vote on the U.S. Supreme Court,’’ Mr. Buttigieg told a crowd of several thousand people. “Nine men and women sat down in a room and took a vote, and they brought me the most important freedom in my life.” 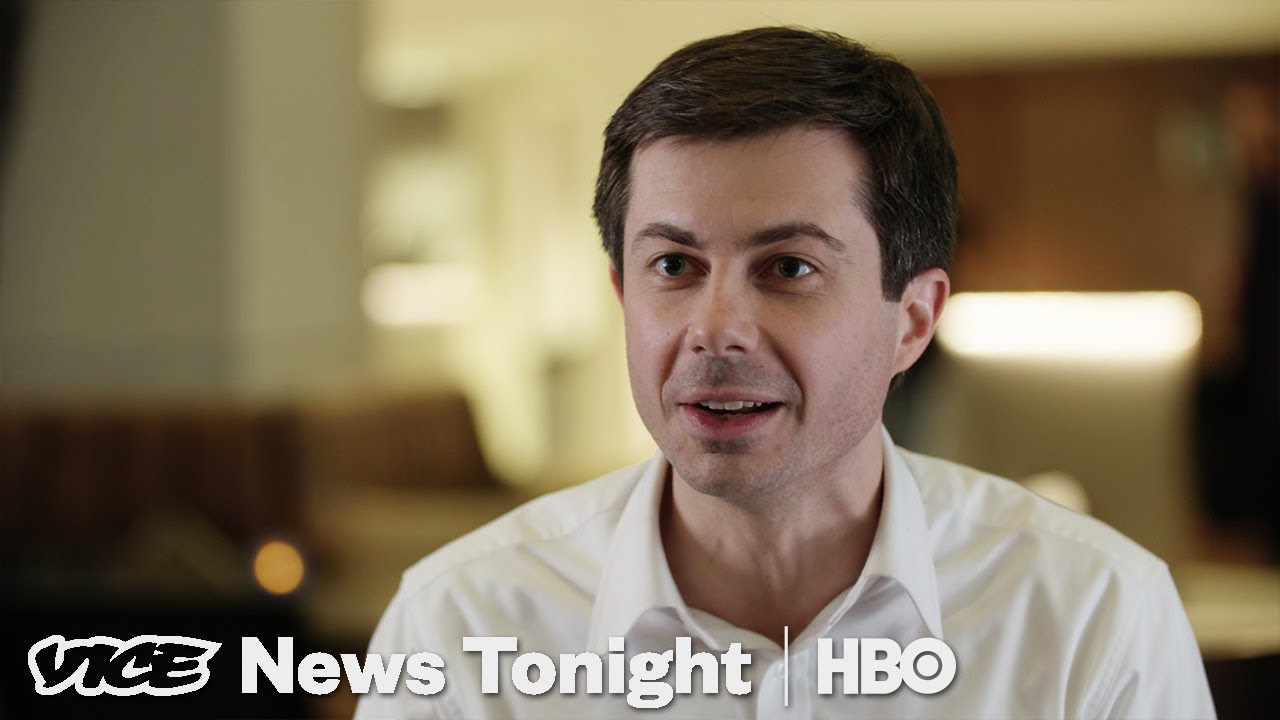 “Though Mr. Buttigieg is a political progressive, his main message is the claim to leadership of millennial Americans, those he says will be on “the business end” of climate change, who grew up with school shootings and who supplied most of the troops in America’s wars in Iraq and Afghanistan.”

“Little known just two months ago, Mr. Buttigieg has won support and financial backing through a blitz of television interviews in which he has given earnest, nuanced responses that make liberal points without raising the temperature.” 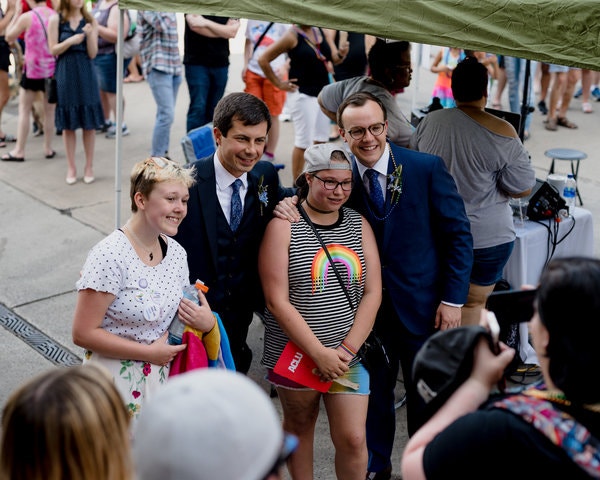 “But he has also engaged some of the left’s big targets, accusing Vice President Mike Pence of religious hypocrisy for standing faithfully behind Mr. Trump and for seeking to erode gay rights.”

“And he makes much of being the only candidate to have served on active duty in the military. Mr. Buttigieg took a seven-month leave during his first mayoral term to serve as a Navy Reserves intelligence officer in Afghanistan. He mentioned “the 119 trips I took outside the wire” guarding or driving a vehicle. The men and women he escorted “cared about whether my M-4 was locked and loaded,’’ he said, “not whether I was going home to a girlfriend or a boyfriend.’’

“Videos showcasing his assorted talents have been online hits, including him speaking in Norwegian and playing piano with the singer Ben Folds and the South Bend Symphony. By some measures, his candidacy has generated more social media interest than any other 2020 Democratic hopeful.”