It’s Time For -I-Word / Where Congress Upholds Rule Of Law VS. Giving In To Political Expediency

QUESTION: What happens if the democrats miscalculate their chances to win back the White House in 2020, and President Trump wins reelection?
ANSWER: The Democratic Party would be toast!

QUESTIONS:
What happens now that the gown-ups have been fired, reassigned and or resigned, to where the toddler minded adults are left to run the White House?

What happens if the rogue Attorney General Barr starts killing off all the pertinent investigations that Mr. Mueller transferred to other US attorneys’ offices around the country?

If the US House Democrats do not hold accountable this president for all his attempts to trample on the rule of law, what precedent does this inaction allow for future presidents to act in similar ways?
***

In addition, the question for the US House Democrats is, what concrete timely steps are they taking to protect US voting infrastructure systems from future attacks by Russian and other foreign or local entities with nefarious intentions?
***
What are the democrats doing to push forward this (S.2261) ‘Secure Elections Act’ to promote voting machines with a paper trail and verification audits, despite obstacles set up by the US president and his cronies in the US Senate?
***
Can the US House Democrats start the impeachment process while supporting their candidates as they focus on kitchen table issues to meet the needs of their constituents? 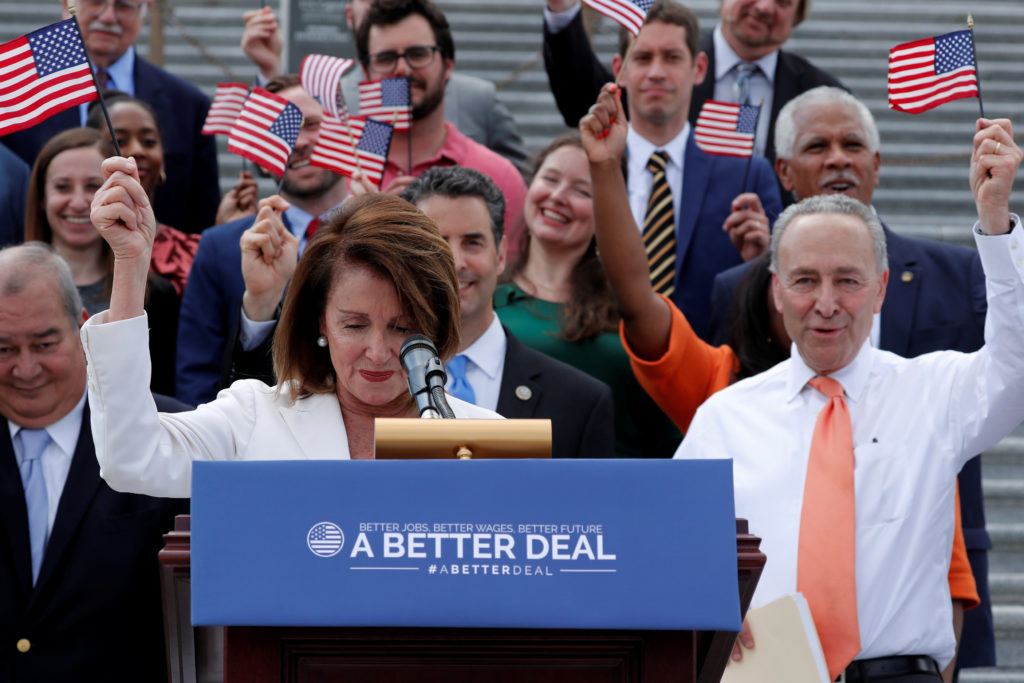 In November 2018, “We the People” moved heaven and earth to elect Democrats to insure that they would become the majority party in US House of Representatives, to be a check on the republican President Donald Trump’s flagrant disregard for the ‘rule of law.’ Most of us have been supportive of the the Democratic Party House Speaker Nancy Pelosi’s reticence to start down the road of impeachment proceedings, against the president based on his actions associated with Russia’s 2016 attack on the US elections infrastructure, especially while there was an ongoing FBI investigation regarding these events.
***
One reason for Speaker Pelosi’s hesitancy to act, is the reality that the US Senate is operating under the majority control of republicans, where its members can’t be counted on, to support this endeavor. Second, it would be a matter of political expediency to let the voters censure the president’s actions at the ballot box on the November 2020 elections’ cycle, about 1 1/2 years away. The impeachment process would take up almost all that time where the outcome would be dubious without the Senate’s support. In addition, there was a credible ongoing FBI Trump Russia probe being led by the Special Counsel Robert Mueller III where there would be more evidence available.
But in the end, there’s the House’s duty to invoke and act according to their constitutional mandate to uphold the rule of law, without giving in to what is politically expedient, and even where a successful outcome is unlikely. Based on the 4/18/2019 receipt of the FBI’s final report on its 22 months long Trump -Russia inquiry led by the FBI’s special Counsel Robert Mueller III, detailing revelations of how President Trump while in the White House, constantly attempted to subvert the ‘rule of law,’ the US House has no choice but to act.
***
The report tells the story of how the president had to be stopped time after time from crossing the line into outright criminal activity by staffers around him, who refused to act on his orders to where some even resigned /left the White House premises rather than be required to break the law. We’ve even observed how the president has fired heads of departments in April 2019, because they refused to break the law.
The Democratic Party lawmakers in the US Congress have to fight back hard to prevent for future serious mishaps. The quickest ways to garner the facts (like president’s taxes, un-redacted Mueller report), especially when the White House is refusing to cooperate, would be for the Democrats to begin the impeachment process no later than mid-June 2018. Otherwise, the Democratic Party will be perceived to be no different from its counterpart, where political expediency rules the day. Are the Democrats in the US Congress going to step into the breach, to stand up for the ‘rule of law or NOT?’
As per the 4/18/2019 NY Times report, “Determining the scope of the Russian interference campaign was a centerpiece of the Mueller investigation, and will most likely be one of its enduring legacies. His report leaves no doubt that it was the Russian government that orchestrated the effort, and that many of Mr. Trump’s aides welcomed it — even if they did not actively coordinate with Moscow.”
***
The FBI report states unequivocally that the Russian government did indeed interfere in the 2016 US presidential elections in a sweeping and systematic fashion to effect the outcome in President Trump’s favor. Moscow made a concerted effort to sabotage the 2016 US elections.

The Mueller report details the following:

“The Special Counsel’s investigation established that Russia  interfere~ in the 2016 presidential election principally through two operations. First, a Russian entity carried out a social media campaign that favored presidential candidate Donald J.Trump and disparaged presidential candidate Hillary Clinton. Second,a Russian intelligence service conducted computer-intrusion operations against entities, employees, and volunteers working on the Clinton Campaign and then released stolen documents. The investigation also identified numerous links between the Russian government and the Trump Campaign. Although the investigation established that the Russian government perceived it would benefit from a Trump presidency and worked to secure that outcome,and that the Campaign expected it would benefit electorally from information stolen and released through Russian efforts, the investigation did not establish that members of the Trump Campaign conspired or coordinated with the Russian government in its election interference activities.”

Yet for 2 plus years, the president has consistently denied the reality that Russia did indeed interfere with the 2016 US elections to where he finally admitted that he believed Russia’s denials, at the world-wide televised 2018 Helsinki Summit where President Trump and the Russian Leader, Vladimir Putin held a joint press conference.
Why did President Trump make phone calls to contact select congressional lawmakers to bar the ‘the passage of the bipartisan crafted law,  ‘S.2261 Secure Elections Act?”  As per govtrack.us, “This bill would eliminate paperless voting machines, which experts say are the most vulnerable to hacking and tampering. It would also expand the use of post-election audits, which are currently rare and usually only used in event of a recount.”
Recent history…
Based on the reality show directed by the republican President Donald Trump that was held on the 18th of April 2019, where the US Department of Justice’s top US law enforcement officer, the Attorney General William Barr with his Deputy Rod Rosentein in tow, demonstrated that he wasn’t the one who could be counted on to protect the rule of law. He betrayed the American peoples by insuring that his boss would be above the law.
***
Contrary to Mr. Barr’s own words for weeks leading up to this moment on the 18th of April, that he wouldn’t comment on the FBI’s 3/22/2019 final report on its 22 months long Trump-Russia probe led by the Special Counsel Robert Mueller, before he had released to the US Congress and the American public, he did just that.
The Attorney General William Barr proceeded to portray the FBI’s Mueller final report in a way that does not accurately reflect its actual content. It became obvious that he was catering to the US president and the 35% of the US population who remain loyal to him. The FBI’s Special Counsel Mueller was conspicuously absent from the press conference. When Mr. Barr was questioned on this point, he answered that Mr. Mueller, the FBI’s Special Counsel reports to him, end of story.
The FBI Special Counsel Mueller who as its former Director for 12 years, a purple heart recipient with an impeccable reputation for competence, integrity and fairness, did earn the public’s trust as he and his team worked countless hours to deliver to us a reliable report on what occurred during the 2016 Russian multi-prong, full throttle attack on US elections infrastructure with its associated political systems.
***
For 2 years, there had been the GOP US Senators strongly backing the former Attorney General Jeff Sessions as their former senate colleague, even though the president had been personally and brutally attacking him for having dared to appropriately recuse himself from exercising his oversight duties over the FBI’s Trump-Russia probe. For almost the entire time Mr. Mueller had been on the job, he had been operating under the constant threat of being fired at a moment’s notice based on the president’s pique.
But out of nowhere, the president was given the green light to fire Mr. Sessions (November 2018) by no less than the US Senate Judiciary Committee’s Chairman Senator Lindsey Graham and the Senates Majority Leader Senator Mitch McConnell. The fix was in. And so, by mid February 2019, the new Attorney General William Barr was ensconced in his role as the head of the US Department of Justice (DOJ) with full oversight responsibilities over the FBI’s Trump-Russia probe, A month later, it was announced that the FBI’s Special Counsel Robert Mueller III was ending his 22 months long Trump-Russia probe.

So now, “we the people” know with absolute conviction that we can’t trust the president, the US attorney general as the head of the  Department of Justice (DOJ) and the Republican Party majority in the US Senate.
***
We are counting on the Democrats who hold the majority position in the US congress to hold this president accountable for his misdeeds, whether criminal or not. Otherwise the following image will be the last word. 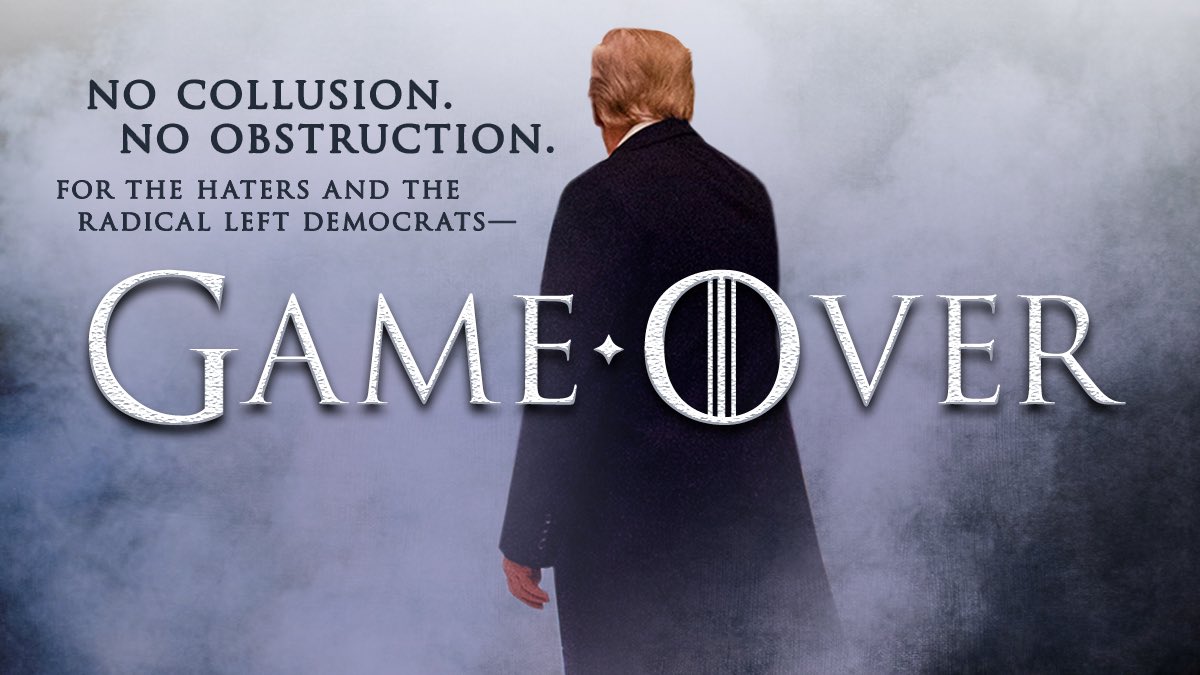 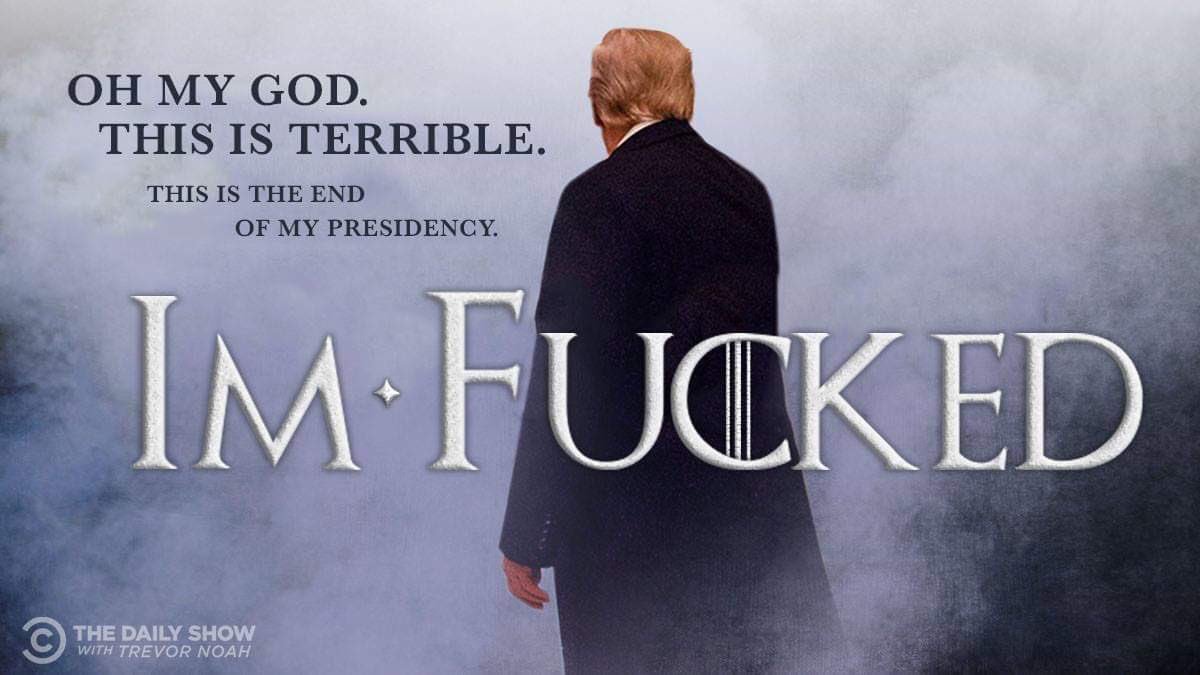