The US Department Of Justice’s top law enforcement officers have managed to disgrace the non-partisan reputation of this once highly esteemed government entity. Its Attorney General William Barr and Deputy Attorney General Rod Rosenstein have taken on the roles of the republican President Donald J. Trump’s personal advocates instead of advancing the concept of the ‘rule of law’ by representing primarily the interests of the American peoples.

It turns out the Deputy Attorney General Rob Rosenstein was playing the part of a double agent. While he appeared to be protecting the integrity of the FBI’s 22 months long Trump-Russia probe being led by the Special Counsel Robert Mueller III, he was telling President Trump that he lent credibility to the FBI’s work and that he would land this plane for him. He ended up backing Mr. Barr’s cover-up by signing off on a 3/24/2019 summary delivered to the US Congress, 4 weeks before the entire FBI’s 448 page work product was finally publicly released with some redactions. The 4 page Barr summary and his subsequent press conference were all designed as a public relations campaign that mischaracterized  what was really contained within the 3/22/2019 Mueller’s report.

Mr. Rosenstein who is leaving his post on May 11, 2019, sent his resignation letter to President Trump with the salutation, “We always put America first.”

It turns out the the FBI’s Special Counsel Mueller was so troubled about how his 22 months of investigative work and findings were being totally distorted by Mr. Barr, causing confusion, that he wrote a letter to Mr. Barr, describing his concerns. Mr. Barr is supposed to be testifying before the US House Judiciary Committee members on May 2, 2019, where he’ll be asked some pointed questions if he doesn’t give into his cowardice by not showing up to testify. He has been threatening to do just that. It appears that he doesn’t want the committee members’ staff attorneys asking the questions. But he’s not in a position where he can dictate how the committee members run their hearings.

Update n 5/1/2019: AG William Barr Is refusing to testify before the US House Judiciary Committee on 5/2/2019 as he doesn’t approve of the format where he is questioned by both the committee members and staff attorneys. The Committee Chairman Rep. Jerrold Nadler is promising to eventually issue a subpoena. On April 30, 2019, Devlin Barrett and Matt Zapotosky of the Washington Post penned the following report, “Mueller complained that Barr’s letter did not capture ‘context’ of Trump probe”

“Special counsel Robert S. Mueller III wrote a letter in late March complaining to Attorney General William P. Barr that a four-page memo to Congress describing the principal conclusions of the investigation into President Trump “did not fully capture the context, nature, and substance” of Mueller’s work, according to a copy of the letter reviewed Tuesday by The Washington Post.”

“The letter and a subsequent phone call between the two men reveal the degree to which the longtime colleagues and friends disagreed as they handled the legally and politically fraught task of investigating the president. Democrats in Congress are likely to scrutinize Mueller’s complaints to Barr as they contemplate the prospect of opening impeachment proceedings and mull how hard to press for Mueller himself to testify publicly.”

“At the time Mueller’s letter was sent to Barr on March 27, Barr had days prior announced that Mueller did not find a conspiracy between the Trump campaign and Russian officials seeking to interfere in the 2016 presidential election. In his memo to Congress, Barr also said that Mueller had not reached a conclusion about whether Trump had tried to obstruct justice, but that Barr reviewed the evidence and found it insufficient to support such a charge.”

“Days after Barr’s announcement, Mueller wrote the previously undisclosed private letter to the Justice Department, laying out his concerns in stark terms that shocked senior Justice Department officials, according to people familiar with the discussions.”

“The summary letter the Department sent to Congress and released to the public late in the afternoon of March 24 did not fully capture the context, nature, and substance of this office’s work and conclusions,” Mueller wrote. “There is now public confusion about critical aspects of the results of our investigation. This threatens to undermine a central purpose for which the Department appointed the Special Counsel: to assure full public confidence in the outcome of the investigations.”

The letter made a key request: that Barr release the 448-page report’s introductions and executive summaries, and it made initial suggested redactions for doing so, according to Justice Department officials. 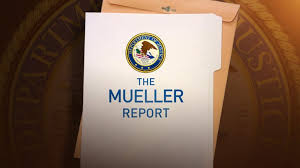 “Justice Department officials said Tuesday that they were taken aback by the tone of Mueller’s letter and that it came as a surprise to them that he had such concerns. Until they received the letter, they believed Mueller was in agreement with them on the process of reviewing the report and redacting certain types of information, a process that took several weeks. Barr has testified to Congress previously that Mueller declined the opportunity to review his four-page memo to lawmakers that distilled the essence of the special counsel’s findings.”

“In his letter to Barr, Mueller wrote that the redaction process “need not delay release of the enclosed materials. Release at this time would alleviate the misunderstandings that have arisen and would answer congressional and public questions about the nature and outcome of our investigation.”

“Barr is scheduled to appear Wednesday morning before the Senate Judiciary Committee — a much-anticipated public confrontation between the nation’s top law enforcement official and Democratic lawmakers, where he is likely to be questioned at length about his interactions with Mueller.”

A day after Mueller sent his letter to Barr, the two men spoke by phone for about 15 minutes, according to law enforcement officials.

“In that call, Mueller said he was concerned that media coverage of the obstruction investigation was misguided and creating public misunderstandings about the office’s work, according to Justice Department officials. Mueller did not express similar concerns about the public discussion of the investigation of Russia’s election interference, the officials said. Barr has testified previously he did not know whether Mueller supported his conclusion on obstruction.”

“Justice Department officials said that, in some ways, the phone conversation was more cordial than the letter that preceded it, but that the two men did express some differences of opinion about how to proceed.”

“Barr said he did not want to put out pieces of the report, but rather issue the document all at once with redactions, and that he didn’t want to change course, according to officials. Barr also gave Mueller his personal phone number and told him to call if he had future concerns, officials said.”

“Throughout the conversation, Mueller’s main worry was that the public was not getting an accurate understanding of the obstruction investigation, officials said.”

Link to report: Mueller complained that Barr’s letter did not capture ‘context’ of Trump …