Over 1000 Prosecutors Have Stated If Mr. Trump Weren’t President, He’d Be Indicted For personal family reasons I’ve recently taken a couple weeks hiatus from keeping up with the latest news and I’ve not been posting any blogs. It’s safe to say that a couple of weeks respite under the republican President Donald Trump’s chaotically run administration means missing out on lots of major current historical events.

After a quick review, one of the most salient news items that caught my attention was the courageous way several 100s of prosecutors, on a bipartisan basis, publicly spelled out the reality of the FBI’s 3/22/2019 final report on its Trump-Russia probe led by the Special Counsel Robert Mueller III, where they state for the record that Mr. Mueller’s report details how President Trump has committed several felonies, to where if he weren’t president, he would have been criminally indicted. This document counters the US Department of Justice’s head, the Attorney General William Barr’s portrayal of Mr. Mueller’s final report as being of no significant consequence, delivering to the public the false impression that the president has been innocent of any criminal wrongdoing.

Because there’s a long standing legal memo by the Office of Legal Counsel (OLC) within the US Department of Justice (DOJ) which bars the FBI’s Special Counsel Mr. Mueller from indicting a seating president, he was forced to transfer the responsibility of holding the president criminally liable, to the US House of Representatives which according to the US Constitution, has been empowered to impeach the president.

However, the US House Speaker Nancy Pelosi still appears to be resistant to have the US House Democrats formally invoke the ”articles of impeachment’ against President Trump because she worries that taking this formality would allow the president to use it to play up the victim card to motivate his base of loyal supporters; and that it would further the divide in this country. In addition, she’s concerned that it will politically cost Democratic Party candidates important victories as they compete for elected positions in November 2020.

As a counterpoint, I’ve been arguing that the US Constitution obligates the US House Democrats to start the impeachment process as soon as possible, as they represent the only government entity which can make the president pay the price for his misdeeds. While I can see postponing the formal start of the impeachment process until the public has been fully informed about how President Trump has broken US laws, where they have a chance to digest impeachment as an unavoidable duty, I can’t approve of US congressional lawmakers out-rightly avoiding the -I- word. This is true, even if they believe that the Republican majority in the US Senate will not vote in favor of impeachment. It’s important to note, that past presidents have never been successfully impeached (ousted) by the US Senate but this mark forever mars the president who has been the recipient of the -I-word, where the ‘articles of impeachment’ had been invoked.

In recent weeks, it’s becoming an inevitable reality that the Democrats in the US House will eventually have to invoke ‘articles of impeachment,’ which grants it much more power to overcome the White House’s refusals to cooperate with US Congressional lawmakers’ multiple requests for documents and/ or the appearances of key witnesses via the usage of legal roadblocks, whether legitimate or not.

Since the US Department of Justice’s Attorney General Barr has demonstrated his intent to do everything possible to cover for the president’s lawlessness, the US Congressional legislators, mostly Democrats are being forced to resort to the US court systems, which even if these cases are fast-tracked, can take months to resolve. President Trump’s obstructionist stance makes it obvious that the White House is trying to run out the clock until after the 2020 elections are fait accomplis in November, when he fully expects to win reelection.

The million dollar question is, how do the Democrats in the US House of Representatives who were elected in November 2018 to form its majority party, to where Democrats would be in a position to act as a check on President Trump’s governing style, best play the hand of cards they’ve been dealt? His expansionist views regarding his executive powers reflects a totalitarian type governance that he aspires to, in the executive branch of our US government. This is why President Trump  with the backing of US Republican Party members in the White House, the US Congress, and right-wing media outlets have been attacking the judicial and the legislative branches of our US government. This strategy includes his war on the 4th pillar of our US government, a free US press. As he weakens these other branches of our US government, as established by our forefathers in the US Constitution, he has been expanding his own powers.

This is why I’m convinced that the Democrats in the US House of Representatives have to eventually, both start the impeachment process as well as preparing to  trounce him and his ilk at the voting booths in November 2020. It’s crucial that the Democrats act on their constitutional duty to hold this president accountable to where a precedent is not set for future US presidents to act with a flagrant lawless contempt towards the other branches of our US government.

There are two steps that the US Congress can take to optimize its chances for success in both eventually invoking ‘articles of impeachment’ and trouncing Republican Party candidates in November 2020.

First, even though the president has been doing his best to bar two key witnesses, the FBI’s Special Counsel Robert Mueller III with regards to his 3/22/2019 final report on his team’s 22 months long Trump-Russia Probe, and the former White House Counsel Don McGahn from telling his story; he technically has no legal standing to prevent them as private citizens from testifying before US House oversight committees if they wish to cooperate. So far,  Mr. McGahn has been honoring the president’s claim to executive privilege by not committing to an interview with the House Judiciary Committee but it looks like Mr. Mueller intends to cooperate.

As per the Harvard constitutional law professor Laurence Tribe, there is no way Trump can stop the FBI’s Special Counsel Bob Mueller from testifying before the US House Judiciary Committee especially since he’ll soon be leaving the employ of the US Department of Justice headed by the GOP partisan Attorney General William Barr.

Second, the US House oversight committees can soon gain access to the president’s tax records despite all the White house’s legal roadblocks to prevent this action, as soon as New York State gains access to his NY tax records which mirrors his IRS federal tax returns.

In short, the republican President Donald Trump doesn’t have the power to prevent private citizens from testifying before the US oversight committees; and eventually the courts will overrule whatever legal roadblocks are set up by the White House to prevent the public from learning what’s detailed in his financial records, as per subpoenas issued by the Democratic Party Chair, Richard Neal of the US House Ways and Means Committee and other US House oversight committees’ chairpersons. In the meantime, the US Congress can rely on his NY tax return documents.

Still, I do wish that the US House Democratic Party leadership were moving ahead with a bit more urgency and less timidity. They need to direct this play. On May 6, 2019, Matt Zapotosky of the Washington Post penned the following report, “Trump would have been charged with obstruction were he not president, hundreds of former federal prosecutors assert”

“More than 370 (now over 700) former federal prosecutors who worked in Republican and Democratic administrations have signed on to a statement asserting special counsel Robert S. Mueller III’s findings would have produced obstruction charges against President Trump — if not for the office he held.”

“The statement — signed by myriad former career government employees as well as high-profile political appointees — offers a rebuttal to Attorney General William P. Barr’s determination that the evidence Mueller uncovered was “not sufficient” to establish that Trump committed a crime.”

“Mueller had declined to say one way or the other whether Trump should have been charged, citing a Justice Department legal opinion that sitting presidents cannot be indicted, as well as concerns about the fairness of accusing someone for whom there can be no court proceeding.” “Each of us believes that the conduct of President Trump described in Special Counsel Robert Mueller’s report would, in the case of any other person not covered by the Office of Legal Counsel policy against indicting a sitting President, result in multiple felony charges for obstruction of justice,” the former federal prosecutors wrote.”

“We emphasize that these are not matters of close professional judgment,” they added. “Of course, there are potential defenses or arguments that could be raised in response to an indictment of the nature we describe here. . . . But, to look at these facts and say that a prosecutor could not probably sustain a conviction for obstruction of justice — the standard set out in Principles of Federal Prosecution — runs counter to logic and our experience.” 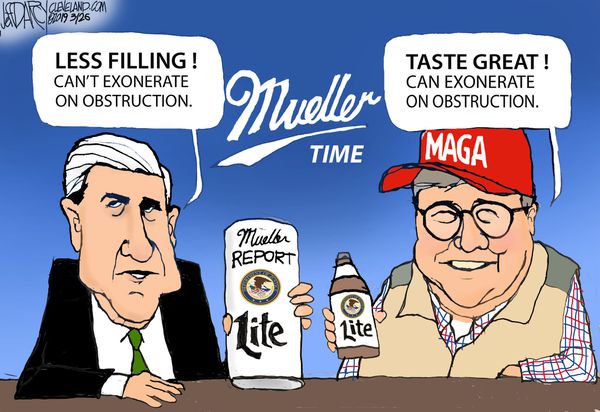 “The statement is notable for the number of people who signed it — 375 as of Monday afternoon — and the positions and political affiliations of some on the list. It was posted online.”

“Among the high-profile signers are Bill Weld, a former U.S. attorney and Justice Department official in the Reagan administration who is running against Trump as a Republican; Donald Ayer, a former deputy attorney general in the George H.W. Bush Administration; John S. Martin, a former U.S. attorney and federal judge appointed to his posts by two Republican presidents; Paul Rosenzweig, who served as senior counsel to independent counsel Kenneth W. Starr; and Jeffrey Harris, who worked as the principal assistant to Rudolph W. Giuliani when he was at the Justice Department in the Reagan administration.” “The list also includes more than 20 former U.S. attorneys and more than 100 people with at least 20 years of service at the Justice Department — most of them former career officials.”

“The signatures were collected by the nonprofit group Protect Democracy, which counts Justice Department alumni among its staff and was contacted about the statement last week by a group of former federal prosecutors, said Justin Vail, an attorney at Protect Democracy.”

Link to report: Trump would have been charged with obstruction were he not President...