House of Representatives Speaker Nancy Pelosi urges President Trump’s family or staff to conduct an ‘intervention’ with him for the good of the United States https://reut.rs/2HOvxRv  via @ReutersTV

For the record, what has been happening over the dueling barbs between the Republican President Donald Trump who is literally suffering a psychotic meltdown that we are witnessing in real time on our TVs and the unflappable, smart experienced US House Speaker Nancy Pelosi  who appears totally in control, is not funny.

The president unhinged is something to be feared as when he granted a compliant Attorney General, as head of the Department of Justice, “full and complete authority” to declassify government secrets, issuing a memorandum late Thursday (5/23/2019) that orders U.S. intelligence agencies to cooperate promptly with William Barr’s audit of the investigation into Russia’s election interference in 2016; and/ or when he directed 1500 military troops to be deployed to the Middle East. This is just for starters.

No, this presidential reaction is not because the Speaker accused President Trump of implementing a cover-up while she was cornered by the press with questions as she was exiting the regularly scheduled Wednesday morning Democratic party caucus meeting while she was departing to meet the president to discuss potential infrastructure plans. His overreaction was because he’s facing the reality that House legislators are about to be granted by the courts access to a lot of his financial records.

The Democratic leaders did step into the oval office prepared to discuss their infrastructure ideas only to wait for President Trump to appear where he voiced his being upset over Speaker Pelosi having accused him of a cover-up. He delivered his pre-planned reality show quality diatribe before heading toward the Rose Garden to address the press, another planned event.

This orchestrated impromptu presidential address before the media is when his irrational thinking became apparent to all. He went on to play the victim card as he delivered his ultimatum that no work on behalf of the American peoples will get done by the White House until the Democrats in the US House end all these investigative hearings.

Later, at a press briefing, the House Speaker Pelosi admitted that she was shaken by President Trump’s behaviors.

Personally, I am convinced of her sincerity when she stated that she’s praying for his welfare and that of our country. She suggested that those who care about him, begin an intervention.

The House Speaker Pelosi and Senate Minority Leader Schumer did describe the day’s events as having been planned before they arrived at the White House. Speaker Pelosi shared her suspicions that President Trump had a temper tantrum because he hadn’t been prepared to move ahead with infrastructure plans. He needed to do something to avoid the fact that he couldn’t figure out how to pay for the $2 billion dollar price-tag, even though, he was the one to proffer this figure at a prior get-together.

The president took advantage of this occasion to explain to the press, his pique at the House Democrats for their continuing oversight investigations into his alleged misconduct in the White House.

During the week of May 20, 2019, the Democratic Party US House Speaker Nancy Pelosi has been demonstrating her formidable leadership qualities in spades as she navigates honoring her oath of office, doing what she truly believes in her heart is the right thing to do to protect this country and its peoples while standing up for the ‘rule of law.’

The Democrats who now represent the majority party within the House of Representatives are divided on how to proceed to hold the republican President Donald Trump accountable for his felonious misdeeds, as detailed in the FBI’s 3/22/2019 final report on its findings regarding the Trump-Russia probe led by the Special Counsel Robert Mueller III.

A growing number of US House Democrats are highly motivated to push towards impeachment, sooner than later, with the intent to do their duty to hold the president accountable for his criminal activities as enshrined in the US Constitution, despite political considerations, especially since the president has been blocking any institution or individual from cooperating in anyway with with the US Congress.

Under current circumstances where the US Department of Justice (DOJ), led by the Attorney General William Barr, a proven lackey for the president who can be counted on, only to refuse to act to mete out justice, leaves the US House of Representatives of the US Congress as being the only governmental entity which has the power to ensure that President Trump is held liable for his criminal acts via impeachment, as per the US Constitution.

Still, Speaker Pelosi and others have been pleading with the House members for a delay in order to first educate the American public by holding public hearings with key witnesses, where they can better inform the public regarding the president’s misdeeds. She feels that it’s important to create a consensus among the citizenry as the commencement of “Articles of Impeachment” or even an impeachment inquiry can be a divisive process, exacerbating an already divided country.

As per the 4/15/2019 USA Today report, “How Nancy Pelosi is leading divided Democrats through political turmoil, Trump’s administration” by Eliza Collins:

“The only woman to become speaker of the House – not once but twice – is plowing forward with her agenda, despite demands from her left flank to act more boldly and her right flank to move with caution.”

“It appears to be working. Pelosi is quick to point out she has never lost a major vote on the House floor. She has gotten unanimous or near-unanimous Democratic support this year on most major House legislation – although the measures are largely messaging vehicles because they stand little chance of passing the GOP-controlled Senate. 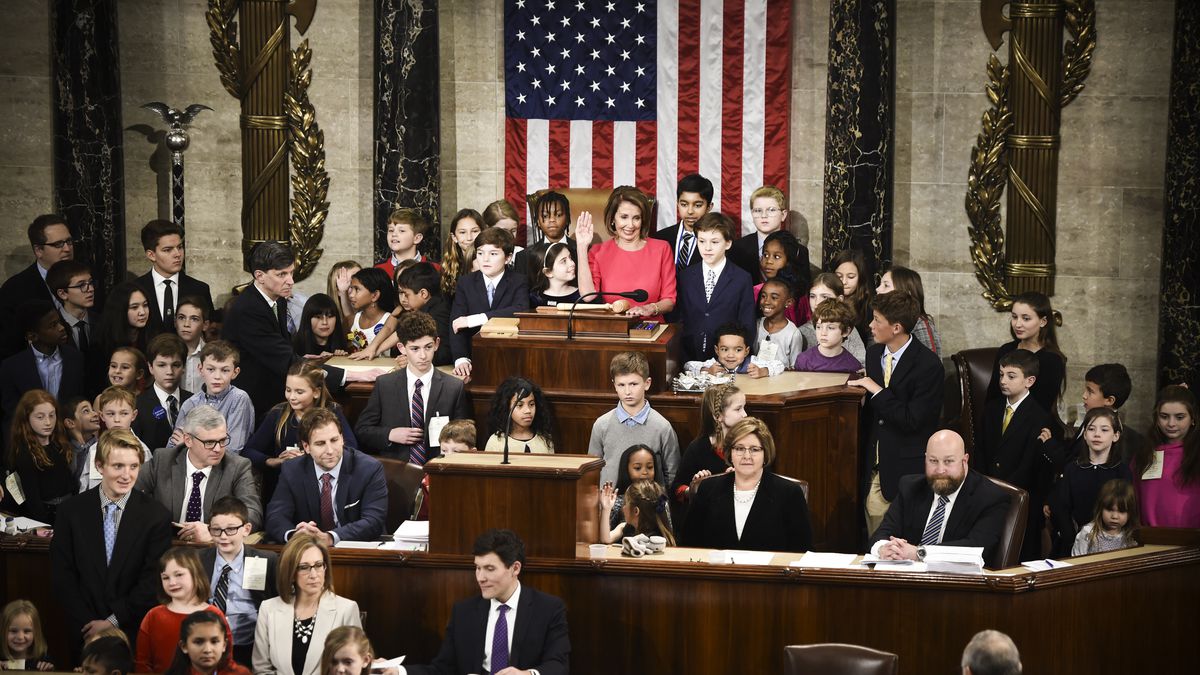 Pelosi was hammered on the campaign trail last year for being a San Francisco liberal, but in an exclusive interview with USA TODAY, she embraced the label as a way of showing her party’s left wing she is one of them, before asking them to move toward the center.”

“I’m a progressive from San Francisco. I think I can have some credentials on the left, as a person who has represented a very liberal city,” Pelosi said last month in Ferguson.

“But you have to govern mainstream,” she added.

“USA TODAY spent the day traveling with Pelosi in St. Louis and Ferguson as she joined Rep. Lacy Clay, D-Mo., to promote policies that unite Democrats: expanding voting rights, job growth and cleaning up corruption in government. Even though the trip followed weeks of Democratic infighting and botched messaging, in Missouri, none of those issues came up.”

“Pelosi is leading her most diverse caucus yet.”

In the dueling taunts between President Trump and Speaker Pelosi, she’s winning, mostly because she appears sane and in control of her behaviors while he doesn’t.

The president has been announcing that he’s an extremely ‘stable genius in multiple forums.

Later, GOP surrogates publicly released a doctored video where the Speaker who doesn’t drink alcohol, appears to be inebriated. Facebook has refused to take down this fake video. Later, Jimmy Kimmel returned the favor as he portrayed a doctored video on his nightly television show where President Trump is also slurring his words.