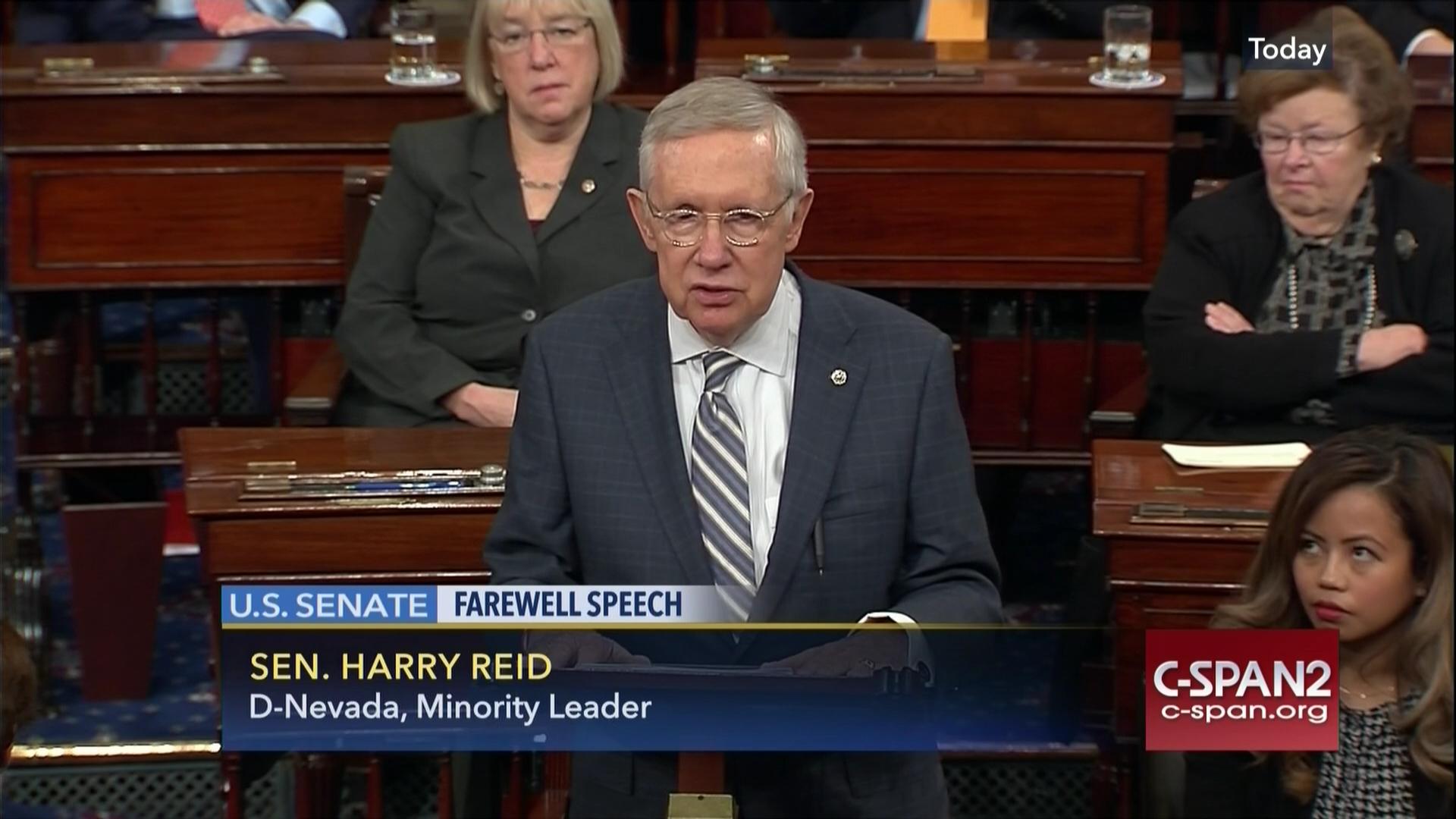 Former Senate Majority Leader Harry Reid has come out in favor of at least the US House Democrats commencing an impeachment inquiry based on the FBI’s 3/22/2019 final report regarding its 22 months long Trump-Russia probe’s findings which enumerated numerous felonies committed by the republican President Donald Trump.

“In an interview with USA Today on Monday, the Nevada Democrat said that “it’s not the right thing to do nothing” about allegations that Trump obstructed justice in the Russia investigation. But he also said “it’s not the right thing to jump into impeachment without doing an inquiry.” Reid added that an impeachment inquiry would help determine where public opinion is on the issue.”

“Reid’s comments are a reversal from few weeks ago, when he told The New York Times that he had concerns similar to Speaker Nancy Pelosi’s about a possible political backlash if the House moved forward on impeachment. ” 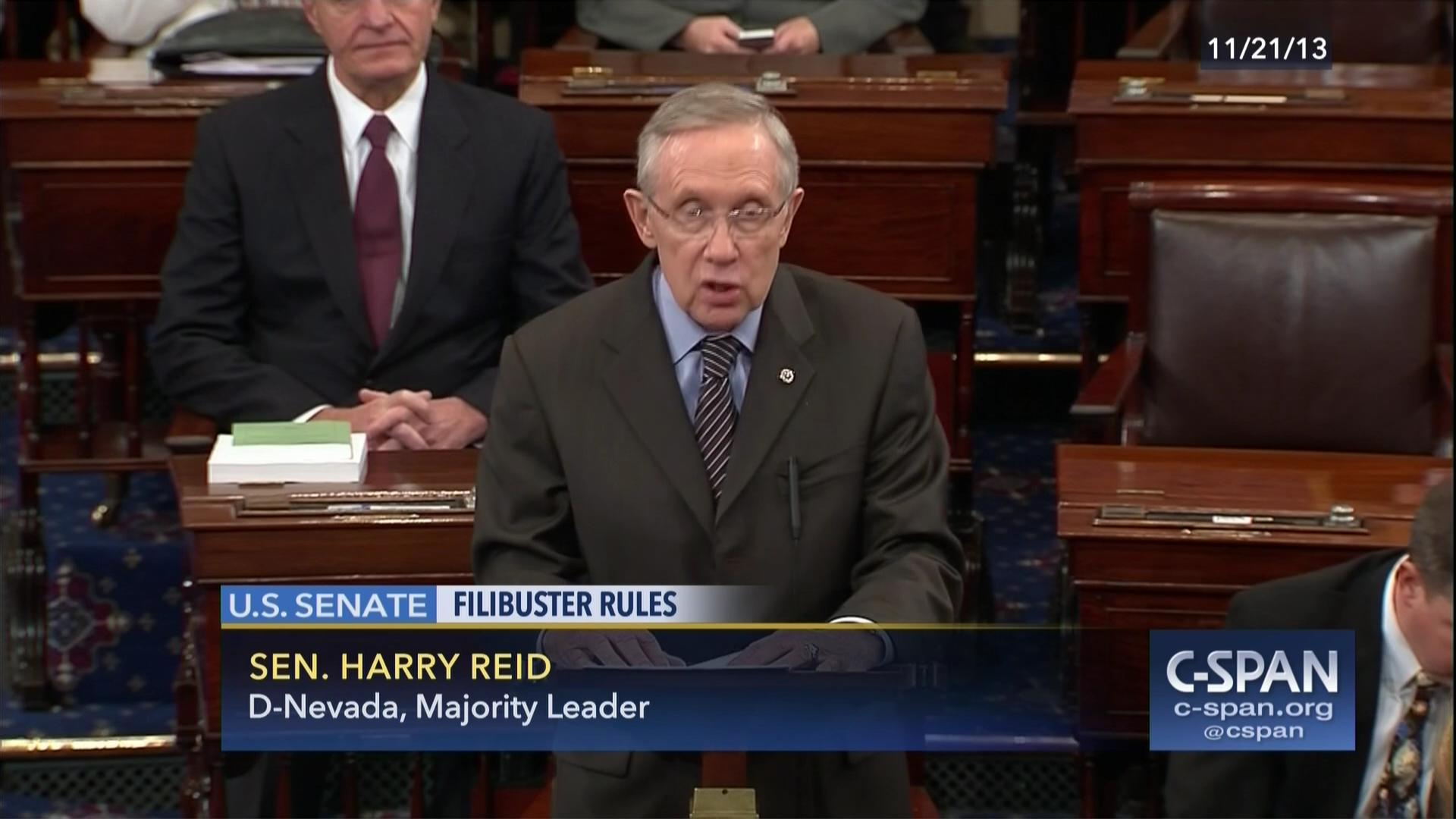 On June 3, 2019, Adam Jentleson, the former deputy chief of staff to former Senate majority leader Harry Reid for GQ penned the following analysis, “The Political Costs of Not Impeaching Trump” (“Democrats are ceding legitimacy to Trump’s claims of exoneration by giving him a pass.”) “I was working for Senate Democratic Leader Harry Reid at the time. Being in the minority limited our options for overcoming McConnell’s blockade. But whenever we started to contemplate more aggressive tactics, they were dismissed on the theory that the upcoming election would sort everything out. Why rock the boat, we told ourselves. We’re on a glide path to victory in November, and then President Clinton will submit her Supreme Court nominee.”

“The rest is history. McConnell’s decision to block Garland consolidated Republican support behind Trump and helped him pull off a narrow victory. Instead of a Democratic president appointing a liberal justice to tilt the balance of the Supreme Court, Trump has appointed 2 justices to entrench a conservative majority for a generation.”

“Republicans wielded their power while we hoped for the best.”

“There are two lessons here for House Democrats as they debate whether to open an impeachment inquiry into President Trump.”

“I don’t know how else to say this: getting impeached is bad. It’s not something you want to happen to you, especially if you’re president. You don’t want to go down as one of only four presidents in history to be impeached. This is a bad thing. Only Democrats, bless our hearts, could convince ourselves that it is good for a president to be impeached.”

“Richard Nixon’s approval rating was at 65 percent when his impeachment process began and only 19 percent of the public supported his impeachment. By the end, the numbers had flipped: his approval was 24 percent and support for impeachment was 57 percent. Former president Bill Clinton survived because he was popular and the man pursuing him, Independent Counsel Ken Starr, wasn’t. The public rightly thought Starr was on a fishing expedition. By contrast, Special Counsel Robert Mueller is popular and the public thinks he is fair, while Trump is historically unpopular. Even though Clinton survived, his heir apparent lost the next election—which he had been heavily favored to win—while Republicans gained seats in Congress.”

“The second lesson from the Garland experience is that like nature, power abhors a vacuum. The decision not to impeach is not a decision to focus on other things, it is a decision to cede power, control, and legitimacy to Trump. Trump is not a master chess player, he just bluffs his opponents into forfeiting their moves—and that is exactly what he is doing to House Democrats.”

“For their part, House Democrats have argued that by foregoing impeachment they can shift the conversation to topics their consultants tell them are safer ground, like health care. That’s not going to happen. Reporters cover news, and only events that drive news can shift the message. House Democrats are understandably proud of having run and won on health care in the 2018 midterms. But their campaign messages were buoyed by a constant flood of major health care news coming out of Washington, DC, driven by the very real threat that Republicans would repeal or replace the Affordable Care Act. But since Democrats took back the House, that’s not going to happen. This is a good thing, but it severely limits Democrats’ ability to drive news on health care. Passing bills in the House that are guaranteed to go nowhere in McConnell’s Senate, as House Democrats recently did with bills to strengthen Obamacare and lower drug prices, will not drive a message.”

“The void that House Democrats are ceding to Trump is the space between now and election day. Filling that space with easy messages like health care is not a viable option. And a good rule of thumb of politics is that if you have the power to do something that hurts your opponent, you should do it.”

“Impeachment is a long process that will highlight Trump’s crimes, which according to (literally) one thousand former federal prosecutors, include “multiple felony charges for obstruction of justice.” Imagine the Michael Cohen, James Comey, or William Barr hearings but on steroids, for many weeks. Anything can happen and hearings can go haywire, but the odds of making a convincing public case against Trump are stacked strongly in Democrats’ favor. Trump’s crimes are serious and laid out in meticulous detail by an unimpeachable source. The public already believes he committed serious crimes by a margin of two to one. There is already a loud chorus decrying Trump’s crimes and arguing that he should be impeached, ranging from Kellyanne Conway’s husband to a sitting Republican Congressman. In this case, the impeachment process is like one of those meals where all the ingredients come in a box: you have to boil some water and maybe crack an egg, but it’s basically idiot-proof.”

“If and when the House votes to impeach, the ball goes to the Senate. The Senate can ignore it, which means the House’s impeachment is the last word. That would be fine. But McConnell would be under enormous pressure from Trump and the entire right-wing echosphere to call a Kangaroo court into session for the purpose of letting Trump off. If the Senate conducts a trial, Senate Republicans up for reelection in 2020—like Maine’s Susan Collins and Colorado’s Cory Gardner—will have to decide whether to vote to remove from office a President who has been shown to have committed serious crimes, or protect him. They will likely vote to protect Trump and it will cost them: they’ll have to explain which of Trump’s many crimes they think are no big deal, why they disagree with the many voices from their own party saying his crimes make him unfit, and why a criminal president should be allowed to continue in office.”

“More importantly, if the public believes Trump is guilty but the Senate lets him off anyway, he won’t ever be truly exonerated—he’ll be O.J. Simpson, assumed guilty but sprung by allies and circumstance. Some Democrats have argued that we should skip impeachment and vote Trump out instead. But if the House impeaches Trump and Senate Republicans fall in line to protect him, the argument that the ballot is the only way to remove him will be supercharged.” (This is where House Democrats ask voters to declare their verdict at the ballot box.)

“By contrast, declining to impeach Trump validates his claim that Mueller exonerated him. At a Grand Rapids town hall held by Michigan’s Justin Amash, the lone Republican Congressman who has come out for impeachment, an attendee was confused by Amash’s position until hearing him lay out the case for an inquiry. “I was surprised to hear there was anything negative in the Mueller report at all about President Trump. I hadn’t heard that before,” she told NBC. “I’ve mainly listened to conservative news and I hadn’t heard anything negative about that report and President Trump has been exonerated.” People will not know what Trump did wrong if Democrats don’t tell them.”

“Even more ominously, Trump’s weaponized Department of Justice under Barr, who has shown himself to be Trump’s eager and obedient partner in abusing the power of the state to advance the president’s political interests, will inevitably invent a pretext for investigating the Democratic nominee. Democrats should consider whether they’d rather engage that fight against a president who has been impeached for serious crimes, or against a president strengthened by the de facto exoneration bestowed when his opponents declined to pursue the evidence against him.”