US House Democrats have long been seeking access to the republican President Donald Trump’s IRS tax returns without success as the White House keeps setting up roadblocks to block the US Congress from being able to review his financial history.

The Democratic Party chairman Rep. Richard Neal of the US House’s Ways and Means Committee does have the authority to request the president’s IRS tax returns which he has done, arguing that his committee wants to oversee the Internal Revenue Service’s annual audits of the president and if warranted, to consider crafting legislative remedies.

But the White House is refusing to cooperate by questioning Rep. Neal’s legislative intent. The Treasury Secretary Steve Mnuchin has argued that Mr. Neal’s demands are politically motivated. Rep. Neal is challenging this claim in the US courts.

See: politico.com/ To get Trump’s tax returns, Democrats must show they have a good reason…

However, Rep. Richard Neal, as the House’s Ways and Means Committee Chairman has the power to request the president’s New York State’s tax returns which does mirror President Trump’s IRS federal tax returns but so far, he’s refusing to take this step.

“The fight by House Democrats to obtain President Donald Trump’s tax returns will go to the courts in a lawsuit soon-to-be filed by the House Counsel’s office.”

“U.S. Rep. Richard E. Neal, D-Massachusetts, chairman of the House Ways and Means Committee made the revelation at the annual meeting of the Western Massachusetts Economic Development Council in Springfield on Thursday.”

“A recently enacted New York state law gives Neal the right to ask for obtain his state tax returns, but the Springfield Democrat is reluctant to travel that road.”

“Obtaining the state tax returns would bolster Trump administration arguments that Congress is on a political fishing expedition — and not, as Neal has maintained, overseeing the Internal Revenue Service’s annual audits of the president.”

“We have no oversight over New York State taxes,” Neal said.”

“The congressman said he is following a well-thought out strategy.”

“This is a court case… this is not for debate on cable shows,” he said.” 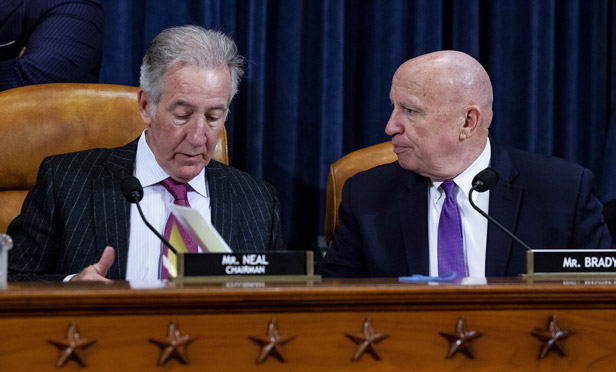 “They’re about to be sorely disappointed.”

“House Ways and Means Chairman Richard Neal would be the only Democrat allowed by the new law to ask for the documents, but so far he has said he won’t do it.”

“Neal has said he fears that getting the state returns would bolster Trump administration arguments that Congress is on a political fishing expedition — and not, as Neal has claimed, overseeing the Internal Revenue Service’s annual audits of the president.”

But Neal’s patience may wear thin if a lengthy legal battle with the Trump administration looms while the 2020 presidential campaign heats up and Democratic voters want to see the House hold Trump accountable.

“At this moment in time Chairman Neal has taken this position, but we’ll see how he decides to proceed in the face of continued obstruction from the administration,” Representative Hakeem Jeffries, the No. 5 Democrat in the House, said in an interview with Bloomberg News Wednesday. “That may cause the chairman of the Ways and Means Committee to change his mind.”

“Some of Neal’s colleagues have little interest in legal nuance and say the state tax returns are better than none at all. They’re pointing to the measure passed recently by the New York State Legislature, which Governor Andrew Cuomo is widely expected to sign.”

“Whatever it takes to get it — I’m for it,” said House Financial Services Committee Chairwoman Maxine Waters, a California Democrat. “I believe that the president of the United States should follow the tradition of other presidents and reveal his tax returns.”

“Neal has asked Treasury Secretary Steven Mnuchin three times for six years of Trump’s federal personal and business returns, citing a 1924 law that allows the chairmen of the congressional tax committees to ask and requires the Treasury secretary to provide them. When Mnuchin refused the request three times, Neal followed with a subpoena but that, too, was rejected. The battle is expected to end up in court.”

“Yes, absolutely, we need to ask” for the New York returns, said Representative Pramila Jayapal of Washington State, who co-chairs the House Progressive Caucus. “We need to know. There is an emoluments clause and a Constitution for a reason.”

“The U.S. Constitution’s emoluments clause prohibits the president from profiting from his office. The fact that Trump did not divest from the Trump Organization when he was elected has raised suspicions that could be answered by reviewing his returns.”

“Jayapal also said the returns would answer whether he has foreign business ties that could be influencing his policy decisions.”

“Neal has crafted his requests to Mnuchin by citing the need for the Ways and Means Committee to oversee the IRS’s annual audits of the president. He fears that seeking the state returns will weaken that argument.”

“We don’t have jurisdiction over New York taxes,” Neal said.

“Nothing requires Trump to release his returns, although presidential candidates have done so for decades. He has said he can’t release the documents because they’re under audit, but no law prevents such returns from being released if the taxpayer wants to release them. The law, however, does allow the chairmen of the three tax-writing committees to ask the Treasury secretary for any filer’s returns and the secretary “shall” provide them.”

“In the meantime, other Democrats have little power to make Neal get the New York returns.”

“The House committee chairmen who have jurisdiction over various Trump probes, including Neal, Judiciary Chairman Jerrold Nadler of New York and Oversight Chairman Elijah Cummings of Maryland, have made agreements with each other defining who controls which investigation.”

“Only House Speaker Nancy Pelosi, who has been focused on winning court battles related to the investigations, can persuade Neal to pursue the New York option.”

“Pelosi has been pursuing a strategy of aggressively investigating Trump, and the courts have so far been ruling for the Democrats. Two judges have ruled in their favor, on subpoenas into Trump’s financial records at accounting firm Mazars USA LLP and banking documents at Deutsche Bank AG and Capital One Financial Corp.”

“Ways and Means members seem to back Neal’s approach.”

“I have high hopes for a victory in the court,” Representative Judy Chu, a California Democrat said of their push for the federal tax returns.”

“Chu said she prefers to see the federal tax returns because they contain more information, including how the IRS has audited Trump. Income earned in other states, charitable contributions and other tax breaks don’t appear on the NY returns.”

“But for others, getting the state returns is a no-brainer.”