I’ll be tweeting this Jon Oliver discussion regarding impeachment to every Democratic Party member in the US Congress. This conversation with his audience was about why the US House of Representatives is obligated to commence its one non-legislative duty, granted it by the US Constitution, an impeachment inquiry against the republican President Donald Trump, based on his numerous felonious activities, detailed in the FBI”s 3/22/2019 final report, regarding its 22 months long Trump-Russia probe, led by the Special Counsel Robert Mueller III and other sources.

He concludes his argument for the -I-word with the following commentary, ““I can’t guarantee that impeachment will work out the way that you want it to because it probably won’t, but that doesn’t mean it’s not worth doing. Because if nothing else, we’d be standing by the basic, fundamental principle that nobody is above the law.”

I’ve put some thought into this as I’m now strongly in favor of the House commencing an impeachment inquiry against President Trump after I took the time to read and study the entire 448 page FBI’s Mueller report. But before I read the FBI’s findings, I had been siding with the House Speaker Pelosi’s reticence to act.

I’ve concluded that there’s no righteous justification for the US House choosing not to do its one non-legislative constitutionally mandated duty to hold President Trump accountable for his crimes via an impeachment inquiry.  A risk / benefit analysis indicates that there’s risk associated with the House implementing impeachment proceedings, but the risk of taking no action far outweighs taking this step that tells the world that in the USA, “no one is above the law.”

And this is where educating the public about why it’s important for the House to commence an impeachment inquiry, should be a paramount mission.

The national survey, which was released Wednesday (6/12/2019) by Quinnipiac University, found that 69 percent of Americans polled support charging a sitting president. Meanwhile, 24 percent of respondents said that a president should face charges for alleged crimes only after they leave the White House.”

What the public doesn’t get is that the House acting as directed by the US Constitution via Impeachment proceedings may be the only real sure way to hold President Trump accountable for his crimes.

Here’s reality. The President’s lackey, the US Attorney General William Barr who heads the US Department of Justice (DOJ) will never lift a finger to insure that justice is blindly meted out against his boss.

The argument that President Trump will be facing criminal repercussions, once he leaves office has one major hole. This is only true if President Trump loses in 2020 but as history has shown us, this is not a guaranteed outcome. The Statute of Limitations for the crimes that President Trump has allegedly committed has a shelf life of 5 years. This is a fact that the president fully comprehends.

The only question left is, what wouldn’t President Trump do to win reelection, in order to avoid this outcome? Frankly, I prefer not to find out but unfortunately, I may not be blessed with a choice.

Don’t listen to pundits that say that the Statute of Limitations could be tolled while President Trump is sitting in the White House but once he’s out of office, he could still be criminally liable. In general, that concept works in civil cases but not in the criminal courts. There are exceptions. For example, there are no statute of limitations for major crimes like murder, treason, arson, burglary, forgery, robbery,rape, drug crimes, sexual assault and child molestation. In short, if President Trump should win reelection, there’s no guarantee that he’ll ever face prosecution in the criminal courts. He will have proven that he’s above the law.

Question: How will the House Democratic leadership defend its avoidance to commence an impeachment inquiry against President Trump when the House, as the only government entity which had the power to act based on the US Constitution in 2019-2020, chose to avoid its duty?

I do get House Speaker Nancy Pelosi’s dilemma.  From her point of view, there’re about 41-44 House democrats from Trump-leaning districts who’d be vulnerable if Speaker Pelosi gave her approval for the start of an impeachment inquiry. Even if she gave a pass to some Democrats to vote against an impeachment inquiry, she’d need about 23 out of the 41 to vote in favor with the one GOP Rep. Justin Amash to equal the 218 required votes.

Speaker Pelosi has figured out that there’s a real risk to not playing her hand well, as Democrats could lose their majority position in House in 2020, because in those Trump leaning districts, Democrats can’t count solely on its base to win. While most Democrats favor impeachment, most Independent and Republican Party voters, don’t.

By now Speaker Pelosi has‘ figured out that because of the voluminous amount of alleged criminal misconduct and all the legal roadblocks set up to prevent the House from doing its oversight duties, by President Trump and his administration, that an impeachment inquiry would last at least one year. This means that if she’s forced to cave into the demand for the House to begin a formal impeachment inquiry because of all the delays in gathering evidence due to the White House’s obstructionist measures, she’d want to time its start towards the end of September 2019. The hearings would probably still be on-going when 2020 elections are held, but meanwhile, the public would become fully informed as to why impeachment was necessary. It’s crucial to send a message to the world that the US stands for the ‘rule of law’ where no one is above the law. 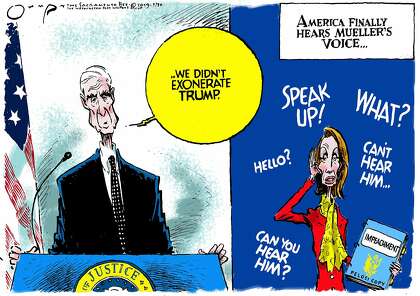 As per the 6/17/2019 Daily Beast report, “John Oliver Makes the Case for Impeaching Trump: ‘Nobody Is Above the Law’ by Marlow Stern:

“On Sunday night (6/16/2019), John Oliver dedicated the main story of Last Week Tonight to laying out the case for impeaching President Trump.”

“Though impeachment isn’t popular with the public—a majority of Americans currently don’t support impeachment proceedings, as House Speaker Nancy Pelosi has pointed out time and time again—Oliver argued that most of the public aren’t aware of the contents of the Mueller Report. Impeachment could be a way of informing them, thus swaying public opinion.”

“While “impeachment in no way guarantees a president’s removal from office,” with no past presidents ever being removed due to impeachment (by the US Senate), Oliver claimed that Trump had committed “high crimes and misdemeanors”—a treasonable offense. He pointed to the 10 instances of possible obstruction of justice outlined in the Mueller Report, including Trump’s repeated orders to then-White House Counsel Don McGahn to fire Special Counsel Robert Mueller, the person investigating him (which McGahn reportedly called “crazy shit”). If that weren’t enough, the report outlined how Trump then pressured McGahn to put out a statement denying that he’d tried to remove Mueller and wanted McGahn to write a letter to that effect for their records.”

“But because this information has been out there for 2 months and failed to make a ripple, Oliver thinks the only next step is impeachment.”

“He pointed to Trump’s recent interview with ABC News’ George Stephanopoulos, in which the president appeared to invite foreign interference in the 2020 election.”

“When it comes to impeachment, there aren’t just 2 outcomes. Even if Trump is not removed, which he probably won’t be, the process could shine a light on the contents of the Mueller Report, potentially lead to new revelations about Trump’s conduct, and force his Republican allies to choose—publicly and on the record—whether or not to hold him to account,” Oliver explained.”

“And you might well say, even so, opening an impeachment inquiry is just too risky, and I do get that. I’ve gone back and forth on this myself for that very reason,” he continued. “And to be honest, the thing that’s tipped the scales for me is remembering that not opening an inquiry comes with consequences too, because it essentially sends the message that the president can act with impunity, which is a dangerous precedent to set—not just for future presidents but for the current one.”