There are those GOP members and/ or Russian bots who have been declaring by Twitter that the republican President Donald Trump and the infamous billionaire pedophile Jeffrey Epstein knew each other in passing and that there was never a friendship where they partied at each others’ domiciles.

In a 2002 interview with New York Magazine, President Trump in his own words called Jeffrey Epstein a “terrific guy.”

“He’s a lot of fun to be with. It is even said that he likes beautiful women as much as I do, and many of them are on the younger side. No doubt about it — Jeffrey enjoys his social life.”

All news accounts indicate that there was a falling out between President Trump and Jaffrey Epstein over a business deal gone sour, sometime in the 2000s. Both were owners of modeling agencies and I’m speculating that this could have been a point of contention. 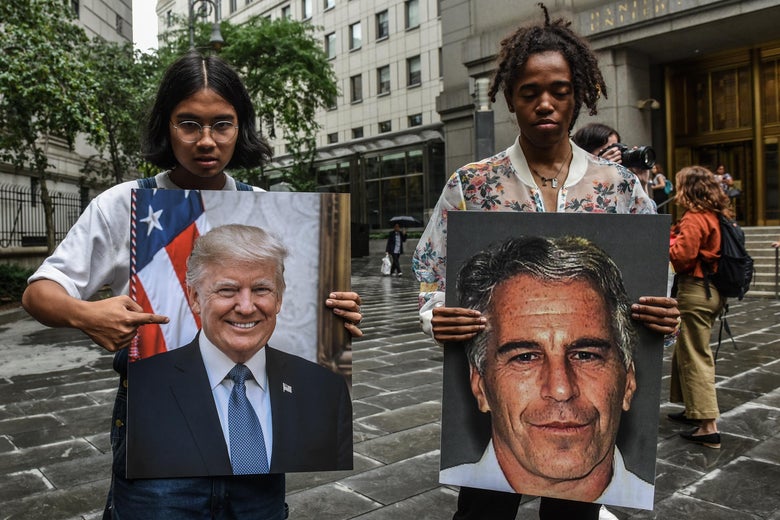 As per 7/9/2019 Vanity Fair report, “HE SAID NOT TO TELL ANYONE”: HOW TRUMP KEPT TABS ON JEFFREY EPSTEIN” by Emily Jane Fox, “But Trump did host Epstein as a guest at Mar-a-Lago, where he appears in photos in 1997 and 2000. Epstein’s personal little black book, which was leaked by an employee in 2009, contained 14 phone numbers for Trump, his wife, Melania, and several people who worked for him.”

On July 9, 2019, Anni Karnie and Maggie Haberman of the New York Times penned the following report,  “Jeffrey Epstein Was a ‘Terrific Guy,’ Donald Trump Once Said. Now He’s ‘Not a Fan.’

“It was supposed to be an exclusive party at Mar-a-Lago, Donald J. Trump’s members-only club in Palm Beach, Fla. But other than the two dozen or so women flown in to provide the entertainment, the only guests were Mr. Trump and Jeffrey Epstein.”

“In fact, that was the case, an indication of a years long friendship between the president and Mr. Epstein that some say ended only after a failed business arrangement between them. The full nature of their eventual falling out is not clear.”

“But through a mutual appreciation of wealth, women and years of occupying adjacent real estate in Palm Beach and on Page Six, the lives of the two men routinely intersected for decades — until the connection turned from a status symbol into a liability, and Mr. Trump made sure to publicize the fact that he had barred his onetime friend from his clubs.”

“In those days, if you didn’t know Trump and you didn’t know Epstein, you were a nobody,” said Alan Dershowitz, the longtime Harvard University Law School professor who later served on Mr. Epstein’s defense team when he was charged with unlawful sex with minors in 2006.”

“Before Mr. Epstein pleaded guilty to the charges, and was mainly known as a reclusive, sweat-shirt-sporting billionaire who liked the company of young women, Mr. Trump spoke enthusiastically about their relationship.”

“I’ve known Jeff for 15 years. Terrific guy,” Mr. Trump told New York magazine in 2002. “He’s a lot of fun to be with. It is even said that he likes beautiful women as much as I do, and many of them are on the younger side.”

“He also dismissed Mr. Houraney’s warning about his friend’s conduct.”

“I said, ‘Look, Donald, I know Jeff really well, I can’t have him going after younger girls,’” Mr. Houraney remembers. “He said, ‘Look I’m putting my name on this. I wouldn’t put my name on it and have a scandal.’”

“Mr. Houraney said he “pretty much had to ban Jeff from my events — Trump didn’t care about that.”

“Shortly before the 2016 presidential election, Mr. Houraney accused Mr. Trump himself of inappropriate behavior toward his girlfriend and business partner, Jill Harth, during their business dealings.”

“The two were photographed together there in the 1990s and early 2000s, Mr. Trump always in a tie, Mr. Epstein always without. And in Manhattan, they attended many of the same dinner parties, like the one that Mr. Epstein hosted for Prince Andrew, where the guest list also included Ron Perelman and Mort Zuckerman, among others.”

“But longtime Trump associates played down their closeness, saying that was simply how Mr. Trump treated any guest at his club — checking on their steaks, bragging about his meatloaf, scanning the room for a better table so guests felt like they were getting special treatment.”

“Since Mr. Trump’s decision to enter the presidential race in 2015, his aides and allies have been eager to minimize any connection to Mr. Epstein, knowing that Mr. Epstein’s relationship with Mr. Clinton would be investigated at a time Hillary Clinton was likely to be his opponent.”

“Roger J. Stone Jr., the former Trump adviser, wrote in his book “The Clintons’ War on Women,” which was published during the campaign, that Mr. Trump “turned down many invitations to Epstein’s hedonistic private island and his Palm Beach home.” Once when Mr. Trump visited Mr. Epstein at his Palm Beach home, Mr. Stone wrote, he later seemed to joke about the scene of underage girls he witnessed there.”

“The swimming pool was filled with beautiful young girls,” Mr. Trump later told a Mar-a-Lago member, according to Mr. Stone. “‘How nice,’ I thought, ‘he let the neighborhood kids use his pool.’”

“Sam Nunberg, a former campaign aide to Mr. Trump, said he raised concerns about the candidate’s involvement with Mr. Epstein before Mr. Trump officially began his presidential campaign. But Mr. Trump assured Mr. Nunberg that he had barred Mr. Epstein from entering his clubs after Mr. Epstein had tried to recruit a woman who worked at Mar-a-Lago.”

“Trump said, ‘I kicked him out of the clubs when this stuff became public, and I made sure NBC knew,’” Mr. Nunberg recalled.”