On the 16th of July, 2019, the House of Representatives led by the Democratic Party Speaker Nancy Pelosi passed a resolution condemning Donald Trump’s racist tweets , along a partisan-line vote of 240 to 187. The tweets were directing the congresswomen of color, knows as the Squad to “go home” to their countries. The motion passed by after a debate, and vote, over whether the speaker violated decorum in calling Trump’s racist comments racist.

The Republicans who voted for the resolution were Reps. Fred Upton (Mich.), Susan Brooks(Ind.),  Will Hurd (Texas) and Brian Fitzpatrick (Pa.).

The former GOP member, Rep Justin Amash of Michigan, the one member who has been pro-impeachment against the republican President Donald Trump also voted in favor of the resolution.

The Squad includes the Democratic Party House Representatives Alexandria Ocasio-Cortez of New York, Ilhan Omar of Minnesota, Ayanna Pressley of Massachusetts, and Rashida Tlaib of Michigan – sparked widespread uproar. Ocasio-Cortez, Pressley and Tlaib were all born in the US, while Omar is a naturalized American citizen who arrived in the country at a young age as a Somali refugee.

Incidentally, as per a 7/16/2019, Reuter’s report, “Support for U.S. President Donald Trump increased slightly among Republicans after he lashed out on Twitter over the weekend in a racially charged attack on four minority Democratic congresswomen, a Reuters/Ipsos public opinion poll shows.” 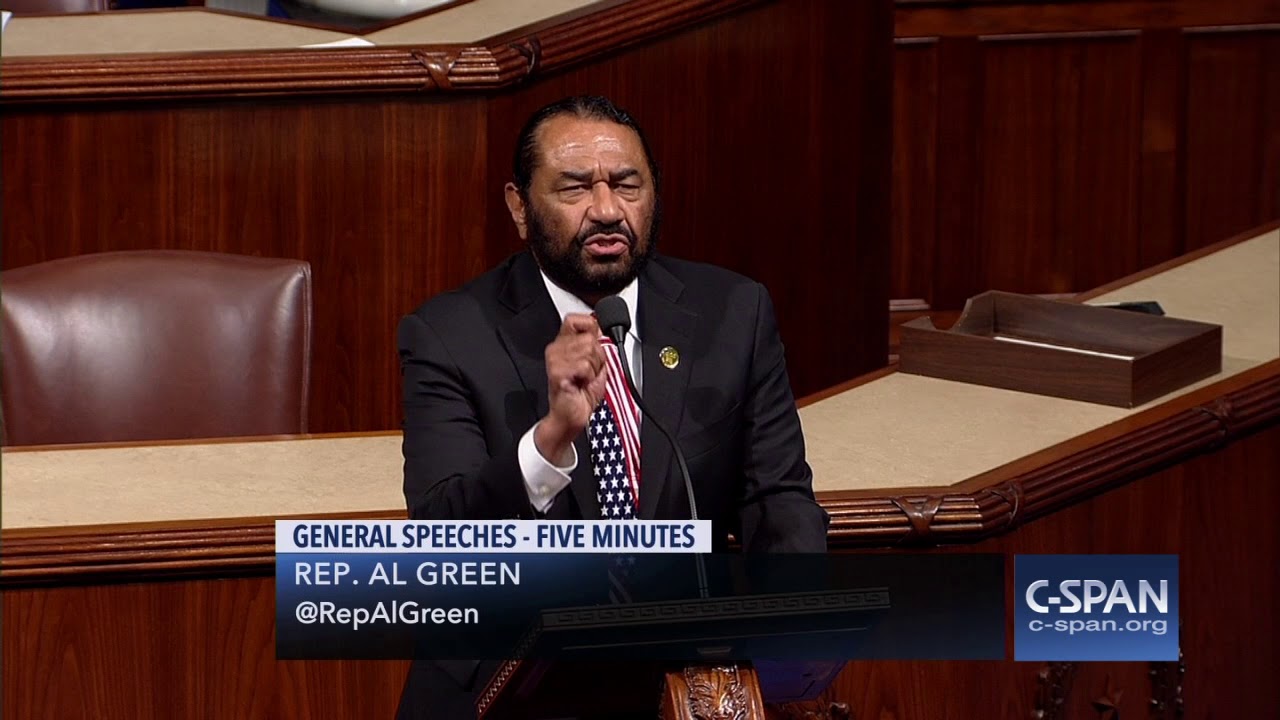 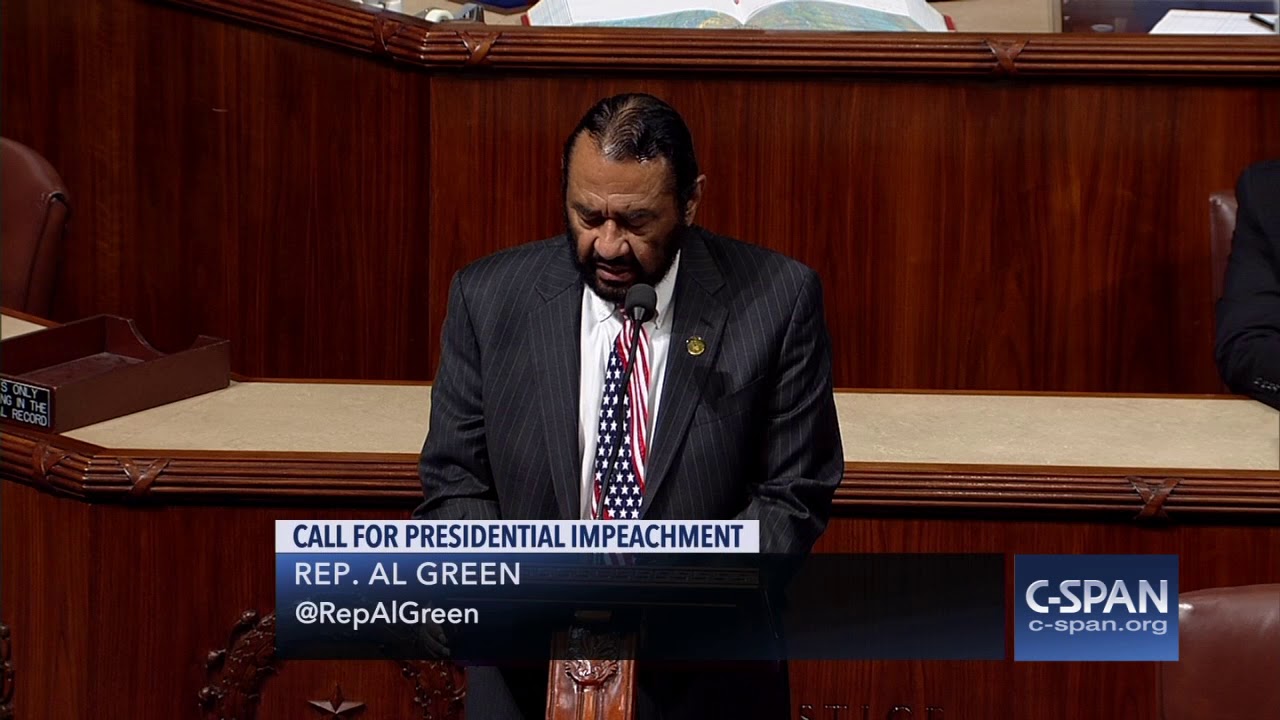 Then the Democratic Party House lawmaker, Rep. Al Green of Texas took to the floor to announce that he’s filing “Articles of Impeachment” against President Trump despite the leadership opposing this move.

On July 16, 2019, Rachael Bade of the Washington Post penned the following report, “Rep. Green files articles of impeachment against Trump despite pushback from Democratic leaders”

“Rep. Al Green filed articles of impeachment against President Trump on Tuesday night, triggering a contentious vote in the coming days to confront an issue that has bitterly divided the Democratic Party.” 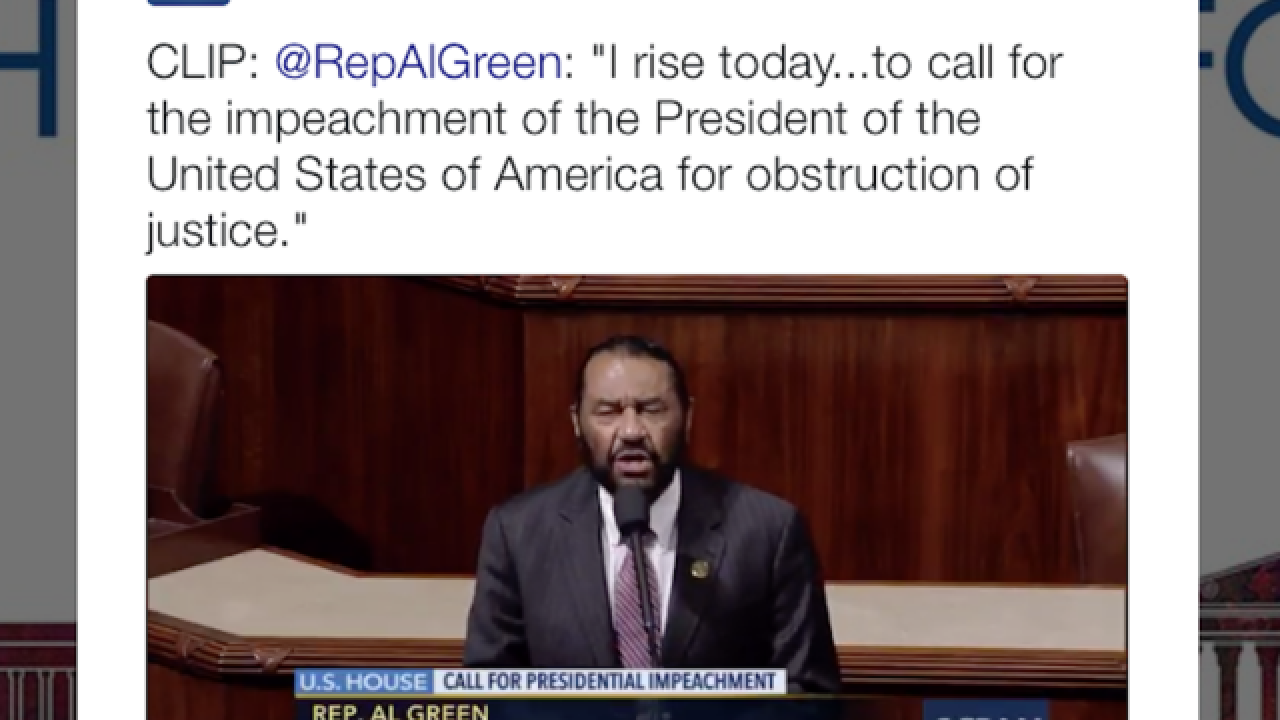 “The Texas congressman, who notified Democratic leaders of his decision on Tuesday, said the House must impeach Trump for racist remarks suggesting four minority congresswoman “go back” to their ancestral countries as well as other comments made in the past. The four Democrats — Reps. Alexandria Ocasio-Cortez (N.Y.), Ilhan Omar (Minn.), Ayanna Pressley (Mass.) and Rashida Tlaib (Mich.) — are all citizens; three were born in the United States.”

“Green’s move will force House Democrats to deal with the issue in the near term because of the privileged nature of the resolution. Under House rules, Democratic leadership can decide to try to table the impeachment articles, effectively killing them for now and risk criticism from the party’s liberal base; refer them to the House Judiciary Committee for possible consideration; or allow the vote to proceed.”

“If leaders do nothing, Green can force a vote on the impeachment articles in two legislative days.”

“The move comes as more than 80 members of the House have called for launching an impeachment inquiry. House Speaker Nancy Pelosi (D-Calif.) has resisted, however, encouraging her chairmen to keep investigating the president for potential abuse of power and obstruction of justice.”

“The matter is likely to divide the caucus, which has grappled for months with the question of what to do about Trump. Even impeachment proponents seemed divided about whether it is wise to force the issue now.  House Homeland Security Chairman Bennie Thompson (D-Miss.) said he would support an immediate move to impeach the president, even voting against Democratic leaders should they try to refer the matter to committee to sideline the debate.”

“In all probability, I’d vote against it, because I’m prepared to vote,” he said of the possibility of leadership moving to table or refer the resolution to committee. “My district wants me to vote for the immediate impeachment of Donald Trump.”

“But others, such as Rep. Jamie Raskin (D-Md.), a strong impeachment backer, hesitated.”

“Certain to be wary are moderates and lawmakers from districts that Trump won in 2016 who have long feared blowback for such a vote. Rep. Stephanie Murphy (Fla.), who leads the conservative Blue Dog Democrats, said, “I don’t think that we have completed the process or the investigations that we need to, to take that step at this time.” Rep. Jeff Van Drew (D-N.J.), a freshman from a swing district, said he would vote against the resolution.”

“Leadership, including Democratic Congressional Campaign Committee Chairman Cheri Bustos (Ill.), was resigned to the likelihood that they could not stop the vote, even if they wanted to.”

“I can’t control what another member does, so it looks like that’s going to happen and we’re just going to have to deal with that,” Bustos said.”

“Leadership officials said Pelosi probably would refer the articles of impeachment to the Judiciary Committee or table them, though her office has not weighed in on the matter. Some Democratic aides, however, worry that Pelosi could struggle to find the votes to refer to the panel because it’d take a majority of her caucus. Republicans, according to a senior GOP leadership aide, are probably will not help deliver those votes.”

“Some have questioned the timing of Green’s move. The House Judiciary Committee is scheduled to receive testimony from former special counsel Robert S. Mueller III next Wednesday, perhaps the most high-profile hearing in decades. Impeachment proponents hoped Mueller would spark new supporters, but they’re not sure Trump’s racist tweets will have the same effect.” 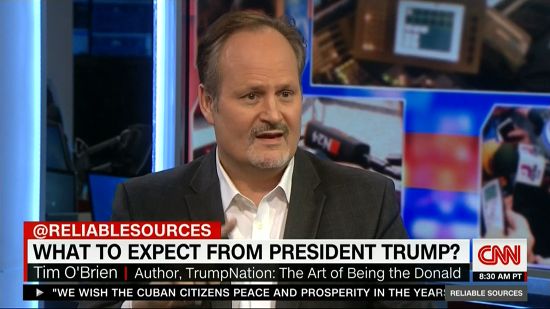 16) “Trump’s first wife, Ivana, told her lawyer during their divorce that Trump kept a copy of Hitler’s collected speeches by his bedside in Trump Tower. When a reporter questioned Trump about the book in 1990, he balked and then said it was a gift.” https://www.bloomberg.com/amp/opinion/articles/2018-10-24/trump-lobs-a-nationalist-grenade-into-the-midterms …
8:52 PM – 16 Jul 2019