“Trump’s first wife, Ivana, told her lawyer during their divorce that Trump kept a copy of Hitler’s collected speeches by his bedside in Trump Tower. When a reporter questioned Trump about the book in 1990, he balked and then said it was a gift.” https://www.bloomberg.com/amp/opinion/articles/2018-10-24/trump-lobs-a-nationalist-grenade-into-the-midterms …
8:52 PM – 16 Jul 2019
****
Here’s the million dollar question? Why would the US Congressional GOP lawmakers put themselves in a position to have to cover/ defend the president’s recent explicit racist tweets against 4 Democratic Party House freshmen of color, known as the Squad? He’s been tweeting, spouting at his rallies and justifying his racist words based on how he hates to watch Americans put down this great country. He’s been ranting that since these congressional representatives are so critical of him and the USA, then they ought to leave the USA to return to their homes. It matters little that three of these representatives were born in the USA and that one was born in Somalia but moved to this country as a 12 year old child before becoming a US naturalized citizen.
****

The above scenario only makes sense if the goal has been all along to establish an authoritarian government in the USA by GOP conservative special interests who have figured out that the future voting demographics favor the Democratic Party, bigly.

Does anyone believe that these dark money GOP donors would graciously accept the reality that all the monies they have invested over the years in owning the Republican Party will be for naught? The GOP lawmakers like Pavlovian dogs have learned to jump to their demands as they’ve become dependent on their huge donations. So what, if it takes racist remarks to motivate the base to get out and vote;  if foreign policy isn’t conducted with consideration as to what’s is the best national security interests of the USA, if Central American refugee children and families of color are being subjected to “crimes against humanity” in the name of the USA at the US SW border; and/or climate change science is being ignored and discounted.

One of the ways President Trump initially introduced racism into his rhetoric was at the start of his 2015 campaign on the Trump Tower’s elevator area, with anti-immigration tirades pertaining mostly to Mexicans. He promised to deal with the undocumented in a decisive way, because Mexico has dispatched the dregs of its society — “rapists” and “criminals” — to the United States. Later, he referred to them as “bad hombres.”

These are President Trump’s own words on 2 occasions:

Here’s the truth about what immigration adds to the USA culture, and which explains why diversity is highly valued by the vast majority of Americans: axios.com/Study: Immigrants and their kids founded 45% of U.S. Fortune 500 companies …

“Credulous pundits told us for days that President Trump’s racist attacks on nonwhite lawmakers were brilliant politics, but Republicans disagree: They are widely warning Trump that presiding over a rally chant of “send her back,” directed at a refugee congresswoman, is putting the party at serious political risk.”

“Trump pretended to disavow the chant on Thursday, claiming he didn’t approve even though video contradicts this, and we are now learning from the New York Times that he came under intense private pressure to do so, including from Vice President Pence and Ivanka Trump.”

“Yet even as many Republicans profess discomfort with Trump’s display, here’s what else is happening: Trump is effectively trying to end asylum-seeking at the Southern border, and Politico now reports that the administration is seriously mulling an effort to slash refugee admissions to near-zero.”

“Generally speaking, Republicans are unlikely to be troubled by these radical, extreme changes.”

“These things aren’t necessarily contradictory. It’s theoretically possible to support dramatic asylum and refugee cuts for reasons not rooted in the white nationalism driving Trump’s attacks on Rep. Ilhan Omar (D-Minn.), a refugee, and the other lawmakers, all U.S.-born racial, ethnic or religious minorities.” 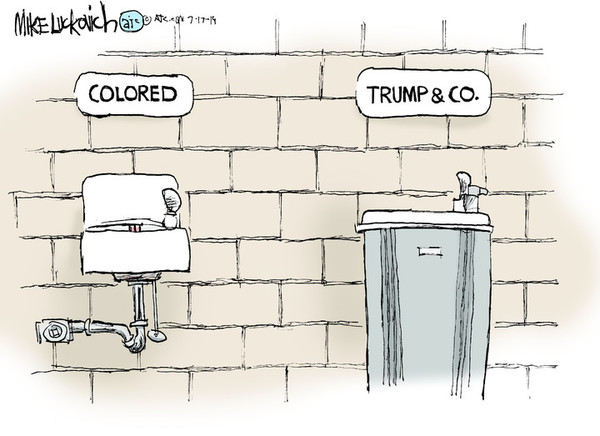 “But it’s now inarguable that Trump’s overall immigration agenda is shaped around the broader goal of preventing as many people as possible from getting asylum and refugee status here, even if they qualify for it on the merits.”

“You can locate a zone of plausible deniability, in which one can claim support for such policies on pragmatic, economic or “cultural” grounds, and not out of any desire to make the US whiter. It’s precisely this zone that Republicans now seek to inhabit.”

“That’s why the GOP panic about the “send her back” chant is significant. It shines a floodlight into this zone and reveals why it’s so hard to credibly inhabit it.”

Why “send her back” is a breaking point

“What’s it about “send her back” that suddenly crossed a line? Consider the timeline:”

Why did the last open the floodgates? The Times tells us Republicans fear telling lawmakers to get out will “backfire” because it appears “personal.” Yet Trump had repeatedly said to “go back” and “leave.”

What changed? Well, the Times also reports that Trump advisers privately warned against letting these sentiments get out of control at his rally.