In the past, it was frustrating to observe the republican President Trump trample on government rules of succession regarding key government positions. For example, there was the case when he fired the head of the US Department of Veterans Affairs, David Shulkin. President Trump repeatedly referred to the VA Secretary Mr. Shulkin as having resigned versus having been fired in March 2018, because the rules of succession would not allow him to appoint his lackey if he admitted to firing Mr. Shulkin. There was a similar guffaw over President Trump’s appointment of a loyal subject to head the Consumer Financial Protection Bureau (CFPB).

This past history probably instilled within President Trump’s a smug certainty that he could appoint his lackey to replace the US top spy, the DNI Director Daniel Coats, despite any counter existing rules. This time the president was wrong in his thinking. Because this Department of National Intelligence involves the collection of intelligence from several US intelligence entities, rules of succession were drafted to be more strict.

As per the August 1, 2019 Palmer Report by Bill Palmer, “Donald Trump ousted Director of National Intelligence Dan Coats because he wasn’t personally loyal. While Trump waits to see if John Ratcliffe (GOP US Rep from TX) is confirmed, Trump wants immediate personal allegiance from the position, so he announced on Twitter that he’ll be naming the Acting DNI shortly. The trouble: that’s illegal, and a key Senate Republican just said as much.”

“Republican Senate Intelligence Committee Chairman Richard Burr is telling CNN that he believes Trump is violating the law by trying to arbitrarily pick his own Acting DNI, when the law requires that Principal Deputy Director of National Intelligence Sue Gordon be named the Acting DNI. Burr just made it orders of magnitude more difficult for Trump to name anyone but Gordon to the acting position.”

Thus, despite what President Trump may be planning, unless she preemptively resigns from her post on August 15, the current Principal Deputy Director Susan M. Gordon will become the Acting Director of National Intelligence. Put another way, there is no tease here. This is what’s supposed to happen.

“There is a crucial difference regarding the DNI succession. Replacing the head of a federal agency is governed by the Federal Vacancies Reform Act (FVRA), which applies for temporary presidential appointments “unless…a statutory provision expressly designates an officer or employee to perform the functions and duties of a specified office temporarily.”

“Because the DNI statute expressly names the Principal Deputy as the employee to assume DNI duties in the case of a vacancy, the president has no authority to name an Acting Director.”

On July 29, 2019, Robert Chesner of Lawfare penned the following analysis, “Who Will Be the Acting Director of National Intelligence (DNI) on Aug. 15?”

“Can the president appoint whomever he wishes to serve as acting director of national intelligence (DNI) during the period between the resignation of Dan Coats (effective Aug. 15) and Senate confirmation of a successor? The president seems to think so, indicating in a tweet yesterday that “the Acting Director will be named shortly.”

I am pleased to announce that highly respected Congressman John Ratcliffe of Texas will be nominated by me to be the Director of National Intelligence. A former U.S. Attorney, John will lead and inspire greatness for the Country he loves. Dan Coats, the current Director, will….

….be leaving office on August 15th. I would like to thank Dan for his great service to our Country. The Acting Director will be named shortly. 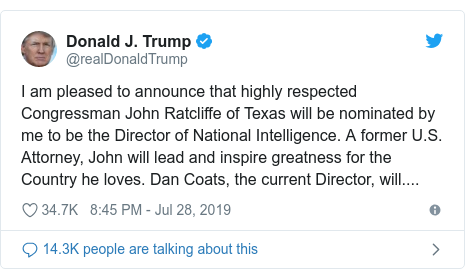 “The president does not have discretion in this matter, however, so long as there is a current principal deputy.

“It is true that the FVRA (5 U.S.C. § 3345) gives the president a fair amount of discretion to designate an “acting” agency head in the event of a vacancy, as a general proposition. Steve Vladeck has provided a handy summary of the three options it confers:”

“In this case, there is such a statutory provision.”

2. What does the 2004 Intelligence Reform and Terrorism Prevention Act (IRTPA) say about DNI vacancies?

“Congress created the Office of the Director of National Intelligence (ODNI) and the position of DNI in a 2004 statute called the Intelligence Reform and Terrorism Prevention Act (IRTPA). (For an excellent history of the IRTPA’s creation, see Mike Allen’s Blinking Red.) The IRTPA included a provision addressing the question of who can serve as the acting DNI in the event of a vacancy. The provision, now codified as 50 U.S.C. § 3026(a)(6), states in relevant part:”

“Taken literally, this would seem to override the discretion that the president otherwise would have enjoyed under the FVRA, compelling the conclusion instead that the current “principal deputy director” (Sue Gordon, a widely respected career official who has held this position since 2017) “shall” serve as the acting DNI for so long as necessary. (Matthew Whitaker presented a superficially similar situation when he was appointed as acting attorney general, but the Justice Department-specific statute in that case contains the word “may” rather than “shall.”)”

3. Can the IRTPA be interpreted as simply an extra option, alongside the FVRA options?

“As an initial matter, this is the best plain-text reading of the IRTPA, which is more recent than the FVRA. It is specifically on point for this office and situation. Its language is not vague. Its language is not ambiguous. It uses the compulsory word “shall” in order to vest the acting director role in the principal deputy in this specific scenario.”

“If this isn’t enough to persuade, consider that Congress in the IRTPA itself includes language that appears to assume that the FVRA would be available to fill other vacancies at the ODNI but not the DNI position itself.”

“In 50 U.S.C. § 3025(e), in a provision that appears shortly after a list of more than a dozen positions as part of the new ODNI, Congress spoke expressly to the vacancies question for the ODNI in general. Specifically, Section 3025(e) expressly anticipates that the FVRA will be used to deal with vacancies, and toward that end clarifies that, in the course of applying certain parts of the FVRA, the president can look to the intelligence community at large (including a wide range of agencies) rather than just the ODNI itself. But Section 3025(e) expressly excludes the DNI position from this rule. Was that because Congress wanted the president to be able to draw on the CIA, the National Security Agency and others to fill the ranks of subordinate ODNI offices but not the most important ODNI office of all? Hardly likely. The far more plausible reading is that this is because Section 3026 already resolves the question of a DNI vacancy by stating that the principal deputy “shall” serve as the acting director.” 4. What about the 2017 Office of Legal Counsel (OLC) opinion on vacancies at the Consumer Financial Protection Bureau (CFPB)?

Notably, the OLC previously addressed a somewhat similar question in relation to the Consumer Financial Protection Bureau (CFPB). In that instance, a CFPB-specific statute also used the word “shall” in identifying a particular officer as the acting director, yet the OLC concluded that this should be read as nonexclusive, leaving the FVRA mechanisms as an option. A district court later went along with that analysis.

Setting aside whether the OLC and the court got it wrong in the case of the CFPB, the important point here is that the IRTPA language in any event can and should be distinguished. The CFPB statute had no provision akin to the language quoted above in which the IRTPA addresses the FVRA as to all other ODNI offices but expressly excludes the DNI position from that analysis. 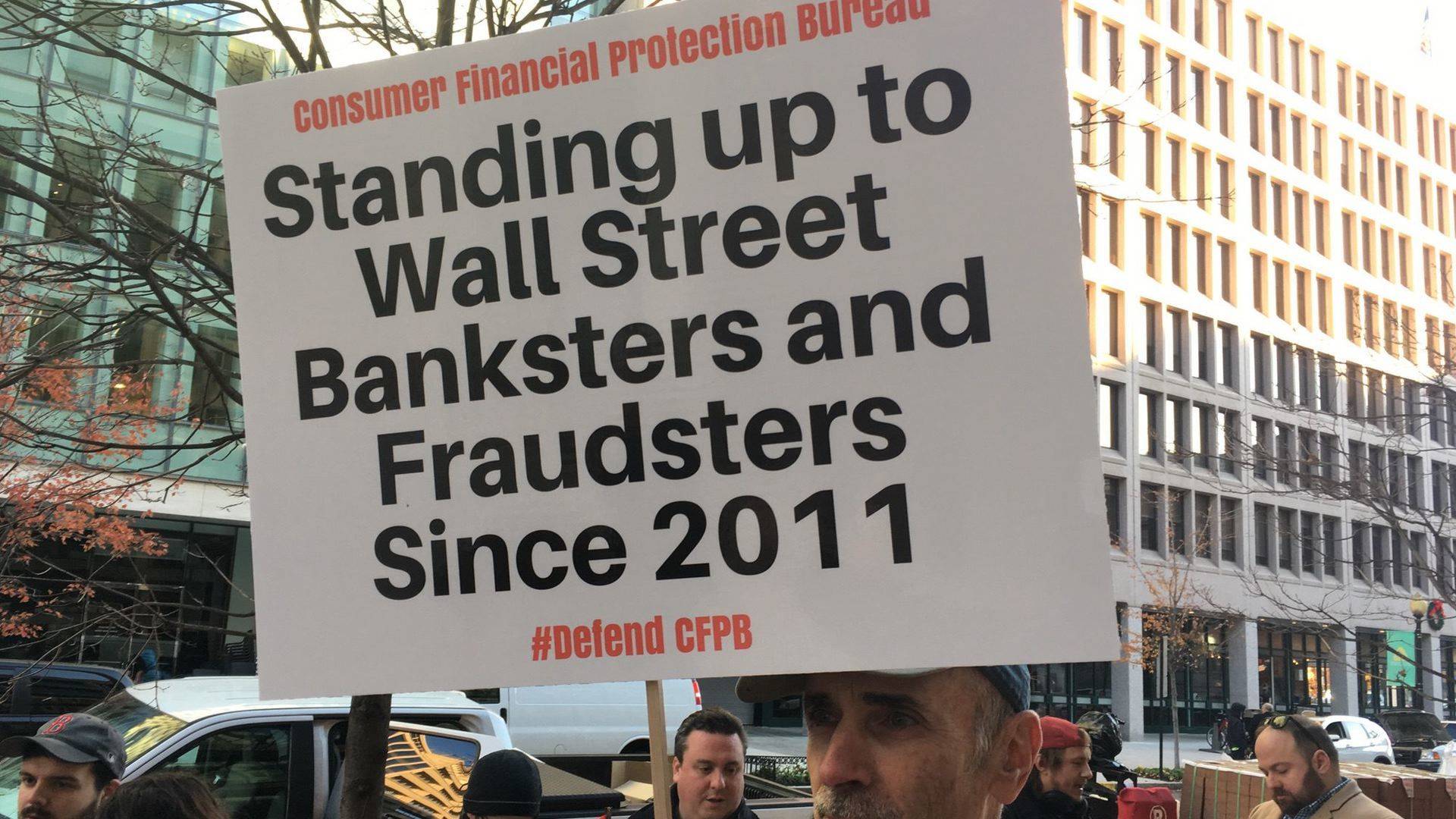 5. Okay, but what if the principal deputy DNI position itself becomes vacant?

Let’s assume the better analysis is that the IRTPA rule controls and, thus, the acting DNI must be the current principal deputy. What happens if the principal deputy position itself becomes vacant, for whatever reason?

As noted above, the IRPTA expressly anticipates that the FVRA will control as to ODNI positions below that of DNI. So, in the event the principal deputy position comes open, the FVRA applies, and the three pools of potential candidates for assigning an “acting” principal deputy under the FVRA become available.

“And in the interim?  There is a presidential directive (the current version appears to date back to 2013) that states as a default matter that the next official in the order of succession (in the event both the DNI and principal deputy positions are vacant) is the deputy DNI for intelligence integration, followed by the director of the National Counterterrorism Center (NCTC).  Since that directive was issued, the intelligence integration post has been redesignated as the deputy director for mission integration, a position currently held by Beth Sanner.”

6. What about the IRTPA’s requirement that the principal deputy have national security experience?

“The IRTPA states that the principal deputy must have “extensive national security experience and management experience” (see 50 U.S.C. § 3026(a)(3)). But that applies only to those actually “nominated for appointment” to the office, not to those designated as “acting.”