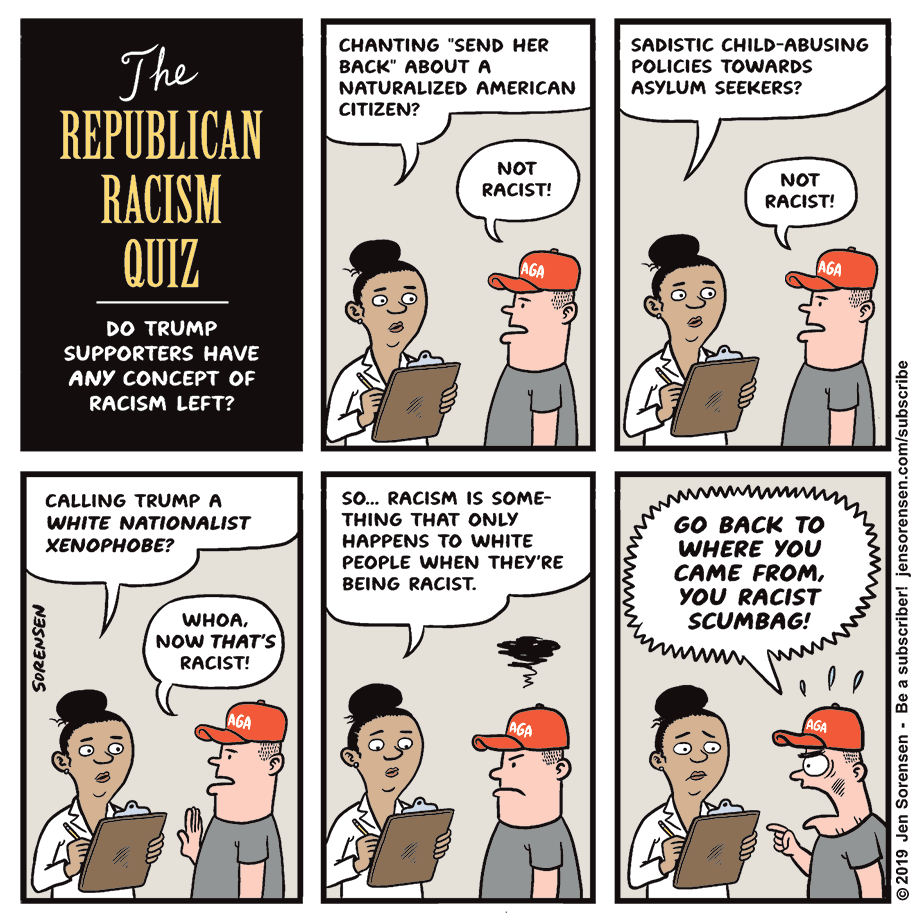 Profiles of courage among GOP elected officials on both the federal and state levels, has become as as hen’s teeth.

These GOP lawmakers are being led by the republican President Donald Trump who’s being directed by the White Nationalists/ White Supremacists operating within the White House perimeter and their dark money donors/ operators. President Trump and others have determined that his path to victory in 2020 is by his openly trafficking in racism/ anti-immigration against peoples of color from sh*thole countries and anti-Muslim rhetoric via Twitter, his rallies and recently his 2000 Ads on Facebook.

The Trumpian Republican Party has become a party that not only condones, tolerates racism within its ranks but who now promotes these forms of hate weapons. What has become disheartening to most of us who resist this White House’s authoritarian type of governing, is the deafening silence by those GOP elected officials who are either willing participants in this trumpeting of racism in order to motivate their base of voters to help President Trump squeak out an electoral college map win in 2020, and/ or they’re complicit with this strategy by their refusal to openly challenge him.

The one GOP US Rep. Justin Amash of Michigan who dared to call for an impeachment inquiry against President Trump has left the Republican Party.

This is the story about another brave soul, the State Senator of Nebraska, John McCollister who has dared to speak up against the GOP leaders pedaling the hate weapons of racism, anti-immigration tropes regarding Mexicans and Central American refugees and anti-Muslim bigotry that are contributing to a rise in hate crimes being perpetrated against minority communities, across the board, ever since the republican President Donald Trump moved into the White House in January 2017. According to the FBI, most of these hate crimes/ mass shootings have been executed by those who have been radicalized by White Supremacy thinking.

As per the August 5, 2019 AP report, “Update: Nebraska Republicans respond to McCollister’s statements:”

A Republican state lawmaker from Nebraska is blasting his party for “enabling white supremacy in our country” and calling on the state’s all-GOP congressional delegation to speak out against President Donald Trump’s inflammatory comments about minorities.

“Sen. John McCollister, a moderate Republican from Omaha, made the comments on Twitter in response to weekend mass shootings in Ohio and Texas that left 29 dead. Officials have said the suspect in the El Paso, Texas shooting posted an online diatribe against immigrants before that shooting.”

McCollister says the shooting was a “tipping point” for him to call out his party, although he doesn’t plan to leave it. 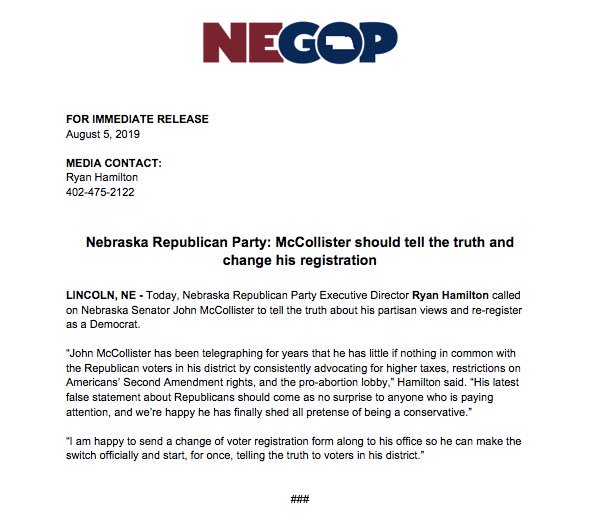 The Nebraska Republican Party put out this response on their Facebook page to McCollister’s statements:

“John McCollister has been telegraphing for years that he has little if nothing in common with the Republican voters in his district by consistently advocating for higher taxes, restrictions on American’s Second Amendment rights, and pro-abortion lobby,” Hamilton said. “His latest false statement about Republicans should come as no surprise to anyone who is paying attention, and we’re happy he has finally shed all pretense of being a conservative.”

“I am happy to send a change of voter registration form along to his office so he can make the switch officially and start, for once, telling the truth to voters in his district.”

McCollister is the son of former Nebraska U.S. Rep. John Y. McCollister, a Republican who served from 1971-1977.

As per a 8/6/2019 HuffPost report, “Nebraska GOP Tells State Senator To Leave Party After He Condemns White Supremacy” by Hayley Miller:

McCollister said Tuesday (8/6/2019) that he has no plans to abandon the Republican Party.

“In light of my recent comments, the Nebraska Republican Party issued a statement,” he tweeted. “Did they join me in identifying and condemning obvious racism and duplicity inside of our party? Sadly no.”

“This current version of the Republican Party does not resemble the party I once knew,” he continued. “I reject the notion that ALL Republicans agree with the rhetoric coming out of the Trump administration. I will continue to speak out and encourage my fellow Republicans to do so as well.”

In light of my recent comments, the Nebraska Republican Party issued a statement. Did they join me in identifying and condemning obvious racism and duplicity inside of our party?

They instead encouraged me to leave the party. My response:

.@SenMcCollister should tell the truth and change his party registration.

I am a lifelong Republican and this current version of the Republican Party does not resemble the party I once knew. I reject the notion that ALL Republicans agree with the rhetoric coming out of the Trump administration.

I will continue to speak out and encourage my fellow Republicans to do so as well.

“McCollister’s tweets on Monday (8/5/2019) followed multiple recent mass shootings in the U.S., including one in El Paso, Texas, on Saturday and one in Gilroy, California, days earlier. Both shootings are being investigated as domestic terrorism.

“The Republican Party is enabling white supremacy in our country,” he wrote. “We have a Republican president who continually stokes racist fears in his base. He calls certain countries ‘sh*tholes,’ tells women of color to ‘go back’ to where they came from and lies more than he tells the truth.”

“When the history books are written, I refuse to be someone who said nothing,” he said.