As per the NCBI (National Center for Biotechnology Information)report, “The hyoid is the U-shaped bone of the neck that is fractured in one-third of all homicides by strangulation. On this basis, postmortem detection of hyoid fracture is relevant to the diagnosis of strangulation. However, since many cases lack a hyoid fracture, the absence of this finding does not exclude strangulation as a cause of death.”

In short, the autopsy detail of Jeffrey Epstein showing that he suffered a hyoid fracture, raises some red flags.

John P. Flannery @JonFlan tweeted following on 8/15/2019:
“EPSTEIN STRANGLED? “Jonathan L. Arden, president of the National Association of Medical Examiners, said a hyoid can be broken in many circumstances but is more commonly associated with homicidal strangulation than suicidal hanging.” Who had a motive?”

Jon Cooper @joncoopertweets tweeted following on 8/15/2019:
“THE PLOT THICKENS: Jeffrey Epstein was confident he could fight the child sex trafficking charges against him and was in “great spirits” just hours before his jailhouse death on Saturday morning — even telling one of his lawyers, “I’ll see you Sunday.”

It raises my ire that the overseer of the Manhattan Metropolitan Correctional Center where Jeffrey Epstein met his maker, just happens to be the (DOJ) US Department of Justice’s headed by the Attorney General William Barr who was the first out of the box to declare Mr. Epstein’s death, as an apparent suicide.

“An autopsy found that financier Jeffrey Epstein sustained multiple breaks in his neck bones, according to two people familiar with the findings, deepening the mystery about the circumstances around his death.”

“Among the bones broken in Epstein’s neck was the hyoid bone, which in men is near the Adam’s apple. Such breaks can occur in those who hang themselves, particularly if they are older, according to forensics experts and studies on the subject. But they are more common in victims of homicide by strangulation, the experts said.”

“The details are the first findings to emerge from the autopsy of Epstein, a convicted sex offender and multimillionaire in federal custody on charges of sex trafficking. He died early Saturday morning after guards found him hanging in his cell at the Metropolitan Correctional Center in Manhattan and he could not be revived.”

“Attorney General William P. Barr, whose department oversees the Bureau of Prisons facility where Epstein died, has described his death as an “apparent suicide.”

“The office of New York City’s chief medical examiner, Barbara Sampson, completed an autopsy of Epstein’s body Sunday. But Sampson listed the cause of his death as pending.”

“Asked about the neck injuries, Sampson said in a statement that no single factor in an autopsy can alone provide a conclusive answer about what happened.”

“In all forensic investigations, all information must be synthesized to determine the cause and manner of death. Everything must be consistent; no single finding can be evaluated in a vacuum.”

“The details add to the bizarre circumstances surrounding Epstein’s death, which have launched a wave of questions and conspiracy theories about how he could have died in federal custody. Even President Trump has egged on speculation, without evidence, that Epstein — whose alleged victims say they were pushed to have sex with his powerful and celebrity friends — might have been killed to keep him from spilling the secrets of others.”

“The revelation of Epstein’s neck injuries follows reports that officers at the Metropolitan Correctional Center broke protocol and failed to properly monitor him.”

“Corrections officers had not checked on Epstein for “several” hours before he was found hanging in his cell, a person familiar with the matter said, one of a series of missteps in the hours leading up to his death.”

“Veteran prosecutors and law enforcement officials were shocked that one of the most high-profile inmates in the country wasn’t more carefully watched. Barr said over the weekend he was “appalled” at serious “irregularities” in jail protocol, and he later transferred the warden to another facility.” 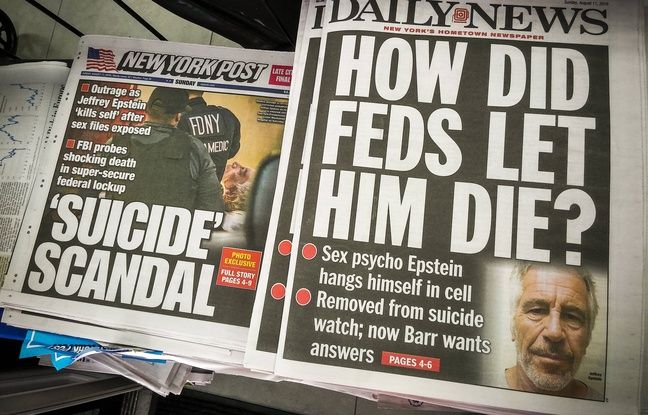 “People familiar with the autopsy, who spoke on the condition of anonymity due to the sensitive stage of the investigation, said Sampson’s office is seeking additional information on Epstein’s condition in the hours before his death. That could include video evidence of the jail hallways, which may establish whether anyone entered Epstein’s cell during the night he died; results of a toxicology screening to determine if there was any unusual substance in his body; and interviews with guards and inmates who were near his cell.”

“Jonathan L. Arden, president of the National Association of Medical Examiners, said a hyoid can be broken in many circumstances but is more commonly associated with homicidal strangulation than suicidal hanging.” “Arden, who was not involved in the Epstein autopsy, said that in general, a finding of a broken hyoid requires pathologists to conduct more extensive investigation. That investigation can include analysis of the location of the noose, how narrow the noose is, and if the body experienced any substantial drop in the course of the hanging.”

“The age of the deceased is also important, Arden said. The hyoid starts out as three small bones with joint-like connections but hardens during middle age into a U-shape that can break more easily.”

“If, hypothetically, the hyoid bone is broken, that would generally raise questions about strangulation, but it isn’t definitive and doesn’t exclude suicidal hanging,” he said.”