In a recent 8/10/2019 Washington Post op-ed piece, one out of many pundits from the right, Hugh Hewitt took on the role of apologist for the republican President Donald Trump’s 2020 campaign strategy, as the president traffics in hate speech typical of White Supremacists/ White Nationalists/ Neo-Nazis, anti-immigration hardliners, especially against peoples of color from Central America, Mexico, Sh*thole countries and countries where the majority population is of the Muslim faith, in order to motivate/ cater to his base of voters which include those who’re supportive of the above sentiments.

While it can be argued that not all those who continue to back the president can be tagged as being racist, they can be called out for backing the GOP’s standard bearer for his trumpeting of his hate, racist laden bull horn and for enacting policies based on racism. Mr. Hewitt’s GOP talking points, parsing of words will not white-wash the president’s kowtowing to the racist faction of his base. President Trump’s hate tirades mimic that of George Wallace from the Robert F. Kennedy era.

Here are excerpts from his 8/10 op-ed piece “The party of Robert F. Kennedy is gone:”

“Kennedy was running for president as a Democrat, but he was very much running against President Lyndon B. Johnson and the Vietnam War. Still, he did not use the tragedy of King’s murder to score points. He did not demonize his opponents in the field, Hubert Humphrey and Eugene McCarthy, or his presumptive opponent in the fall, Richard Nixon. He didn’t just speak to Democrats or some small slice of Democrats whom he considered “his base.” Kennedy spoke to all Americans, especially the deeply traumatized black community, and urged peace and love and healing.”

“The aftermath of the El Paso and Dayton, Ohio, mass murders, both rooted in the malaise and bigotry of our online age on both the fringe left and right, did not summon forth a Kennedy. Every single Democrat missed his or her opportunity to step up, as RFK did, and instead stepped in it, as I noted in Friday’s Post “Pundit Power Rankings.”

“Indeed, almost all of the Democrats chose in this week following a weekend of horrors to pivot their main message of the campaign trail from “Trump and Russia” to “Trump and racism.” At least five of the Democratic candidates went so far as to brand President Trump as a white supremacist.”

“This is repulsive rhetoric — the sort of speech intended to marginalize and exile. It is “basket of deplorable” on steroids, and it says to every Trump supporter: “You, too, are a white supremacist.”

“I do not believe Trump is a racist, much less a white supremacist. I think the rhetoric of the Democratic candidates is incendiary and dangerous, and also politically self-destructive. It is so absurd as to be laughable but for its repetition.”

Of course, Robert Kennedy’s grandson, US Rep. Joe Kennedy III, a Democrat, representing Massachusetts felt obligated to respond with his 8/14/2019 Washington Post op-ed piece, “Joe Kennedy: This moment isn’t about my grandfather Robert Kennedy’s legacy. It is about our own.”

“On the night the Rev. Martin Luther King Jr. was murdered, Robert F. Kennedy climbed onto the back of a flatbed truck in Indianapolis and addressed a largely African American crowd that had yet to hear the news. Stricken and vulnerable, hurting and heartbroken, my grandfather offered them what he could. Not a magic wand to heal all wounds, but some humanity to hold on to, from a man who knew what it meant to ache.”

“While riots and violence shook the rest of the country in the hours that followed, Indianapolis stayed calm.”

“That conservative Post commentator Hugh Hewitt recently manipulated that moment in his column to take a political shot against the Democratic Party is grotesque.”

“But before we get back to my grandfather, there are a few other things Hewitt got wrong. First, that a president who keeps black and brown children in cages, terrorizes black and brown families with military-style raids and tries to block black and brown voices from voting can be called anything other than racist.” 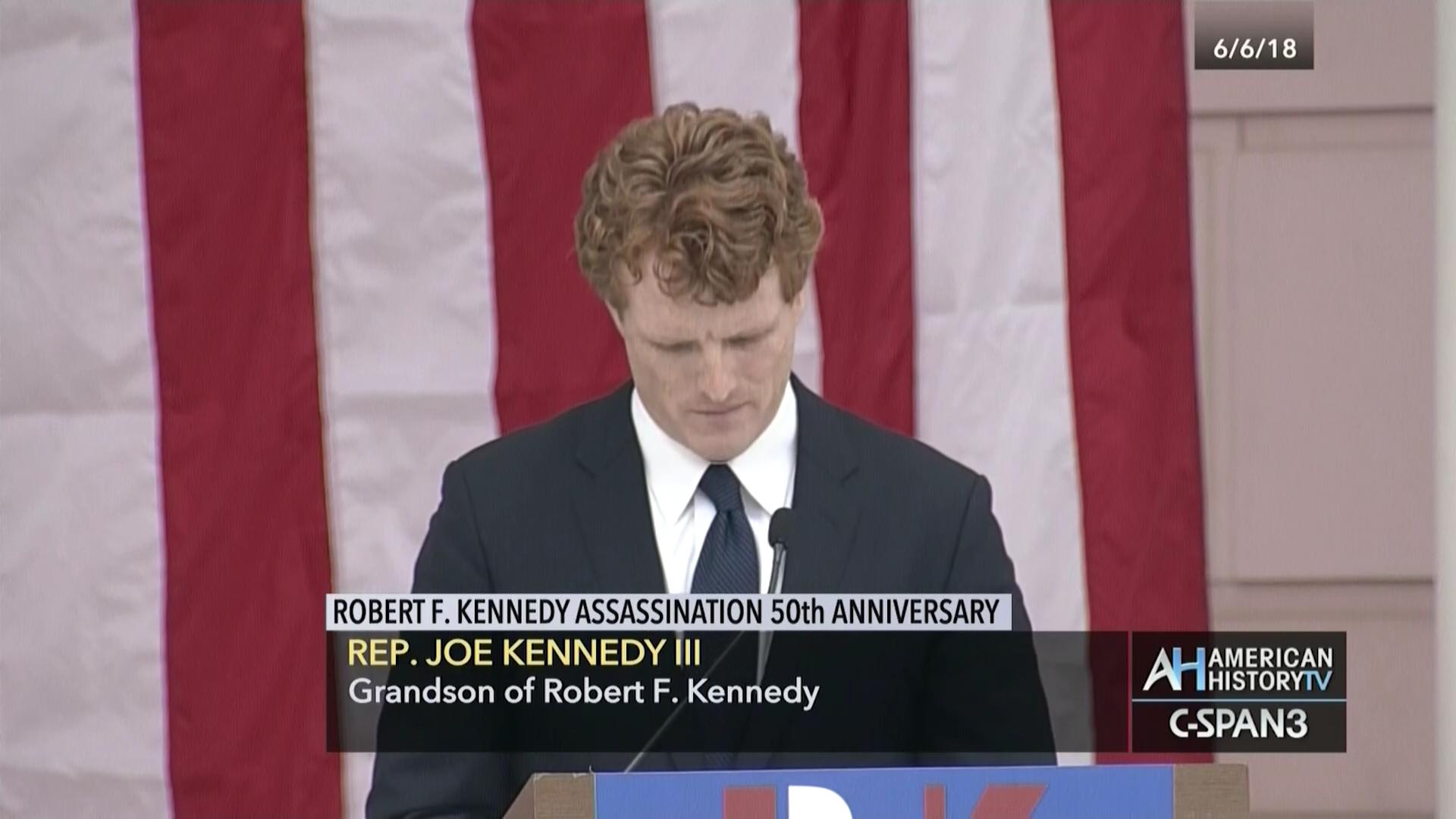 “Second, that the injury we should lament comes from being called a racist, rather than being the subject of racism itself. Hewitt’s problem is those of us speaking out against President Trump’s assault on America’s character (language allegedly “intended to marginalize and exile”), rather than a president who is actively marginalizing and literally exiling those who don’t look or live or love or pray like him.”

“Third, that racism manifests only in its worst offenders. This is the most pernicious assumption of white America, a familiar display of our stubborn privilege. That no matter how deeply we benefit from a system designed to advantage white over black, we can somehow wash our hands of the suffering that system inflicts.”

“None of our hands are clean. And the reckoning going on in this country today is a reflection of what the Rev. King himself warned us of — that it is the silence of friends, not the words of enemies, that ultimately protects American shackles.”

“This reckoning  is hard and messy work. It can put people on their heels. But justice isn’t about what’s comfortable. If one person knew that, it was Bobby Kennedy. My grandfather was not afraid of ugliness or ashamed of suffering. He didn’t shy away from deep wounds, knowing they needed light and air to heal. Time and again, he showed up to bear witness to underbellies, forgotten corners, the sick and grime and mess of our country’s most profound shortcomings.”

“Coming to his knees to comfort a starving child in a sharecropper’s shack in Mississippi. Leaning gently against a weakened Cesar Chavez, breaking bread in solidarity with exploited farm-workers across the country. Sitting on a rickety twin bed next to a recently orphaned, 10-year-old Lakota Sioux boy on the Pine Ridge Reservation. Climbing onto the back of that truck at 17th and Broadway when Dr. King died.”

“Hewitt was right on one count: It was a good speech that night. But he fundamentally misunderstands why. My grandfather’s words landed not because he was trying to speak for all Americans but because he was fighting for a nation where silenced Americans could speak for themselves. And the audience knew it.”

“Today, that fight pulses through the arteries of a people unafraid to call out Trump for his white supremacy, to fight for the neighbors the president exploits, excludes and leaves behind, and to take to the streets in defense of a country worth uniting for.”

“The moral clarity of Robert F. Kennedy’s final years came, in part, from anger. Anger at the blatant racism he witnessed as attorney general of a nation struggling to shake the legacy of Jim Crow. Anger at the hypocrisy he saw in a Democratic Party that counted avowed segregationists such as George Wallace in its midst. Anger at a country whose silence continued to abet safe havens for injustice. Time and again, his work brought him to those safe havens, from school doors in Alabama to grape fields in Delano, Calif., to shotgun homes across the Mississippi Delta. And from all this horrifying wrong emerged in him an ironclad belief that the United States was capable of right.”

Link to entire op-ed piece: U.S. Rep. Joe Kennedy III responds to this column: This moment isn’t about my grandfather Robert Kennedy’s legacy. It is about our own.

See: Joanthan Capehart: Trump can’t decry racism and white supremacy if he is their chief promoter