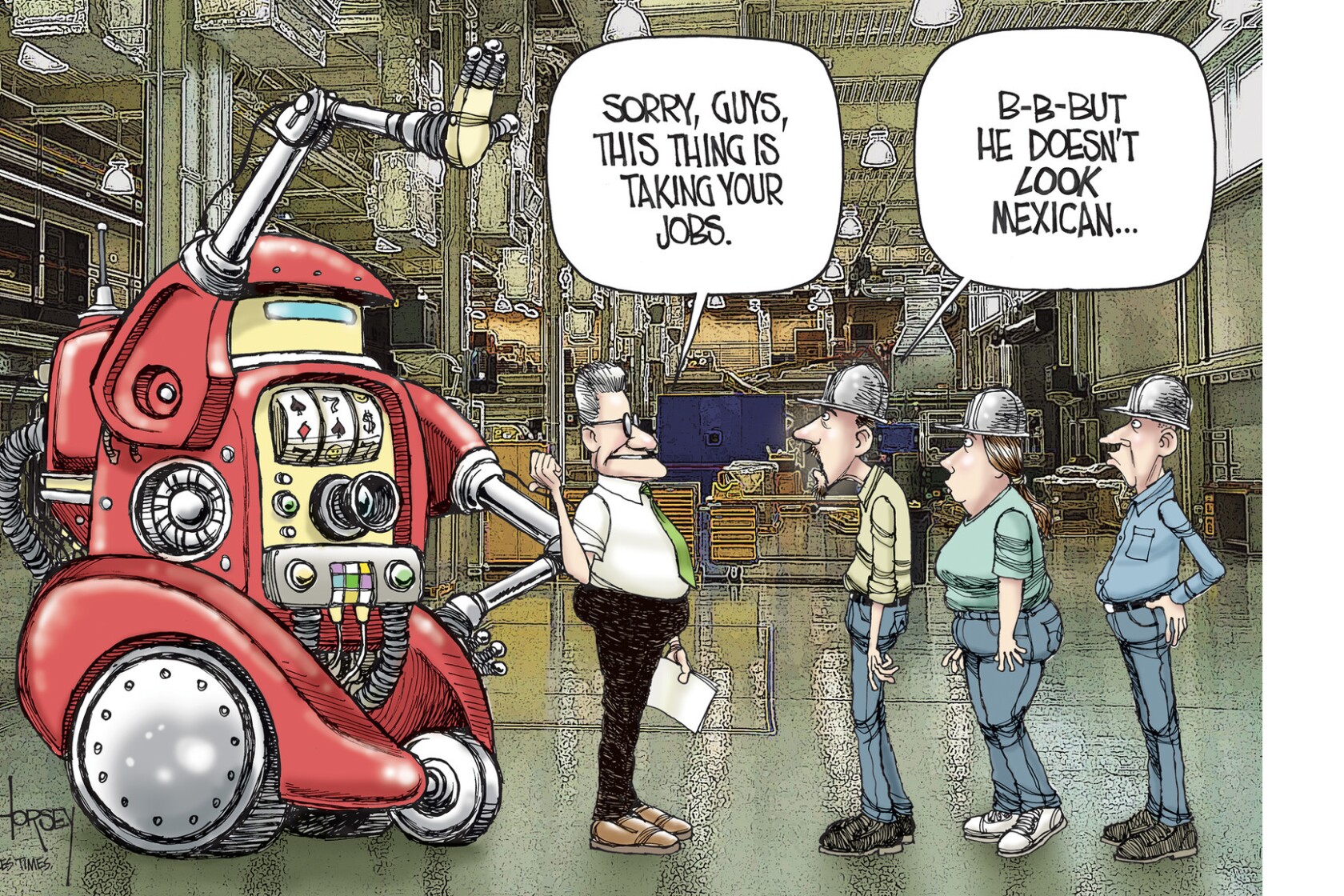 Bill Maher keeps warning his listeners to be critical of the republican President Donald Trump but not his followers, as many who voted for him were just sick and tired of not being listened to regarding the loss of decent jobs that pay a living wage. He has a point.

President Trump and his fellow GOP leaders backed by corporate dark money donors have been supporting and encouraging the misconceptions that it is the immigrant or the other (fill in the blank) as well as the movement of these jobs to overseas locations to cut fixed costs which have been responsible for the loss of blue collar jobs that pay a living wage and for wage stagnation that has lasted for decades.

Yes, these developments have cost US manufacturing/ mining jobs but there’s something that President Trump and his GOP cronies have not been sharing with these displaced workers. The vast majority of these employment opportunities have been replaced by technology/ automation/ robotics at the behest of corporate bigwigs.

The New York Times ran a story titled “The Long-Term Jobs Killer Is Not China. It’s Automation,” while the Associated Press explained “Why robots, not trade, are behind so many factory job losses.”  A much-cited Ball State University study suggests that automation has already proven a major driver of job loss this millennium. The paper notes that the decade between 2000 to 2010 marked the U.S.’s largest decline in manufacturing jobs in its history. The National Economic Council Director turned Harvard professor Larry Summers penned the bluntly titled piece “Robots are hurting middle class workers. ”

In conclusion, it’s the corporate leaders who have made the decisions to displace US workers by moving jobs abroad to reduce costs/ increase profits. It’s the corporate bosses who have decided not to use the governments free service (taxpayers’ monies) of E-Verify to check on the legal status of an immigrant employee. If there are no jobs open to undocumented workers, then immigration driven by economic concerns would be curtailed. And it’s the corporate brass who have been resorting to the usage of Robots, at a cost to many manufacturing jobs.

What’s worse is that President Trump has most of the products he uses and sells made overseas as he habitually hires immigrants to staff his various resorts. Current White House current immigration bans have more to do with barring peoples of color from entering the USA versus the keeping of US jobs on US soil.

ALEC (American Legislative Exchange Council) was founded in 1973 by corporations in order to craft legislation designed to promote corporate interests and then to be used  by GOP lawmakers at work in states with GOP majority legislative bodies and the US Congress. ALEC was backed by Koch brothers’ monies and included titans from the business world like Exxon-Mobile of the fossil fuel sector, Wall Street, the insurance industry, along with the NRA (National Rifle Association) plus the religious New Right, represented by its figurehead Paul Michael Weyrick, an American religious conservative (Evangelical) political activist. He co-founded the conservative think tanks The Heritage Foundation, the Free Congress Foundation, and the American Legislative Exchange Council.  Many of these ALEC members are also the dark money donors of today.

Paul Weyrich launched the precursor to Fox News, NET. As per Wikipedia, National Empowerment Television (NET), also known as America’s Voice, was a cable TV network designed to rapidly mobilize conservative followers for grassroots lobbying. It was created by Paul Weyrich, a key strategist for the paleoconservative movement. At its peak, it claimed to reach more than 11 million homes.

“Up to 20 million manufacturing jobs around the world could be replaced by robots by 2030, according to analysis firm Oxford Economics.”

“People displaced from those jobs are likely to find that comparable roles in the services sector have also been squeezed by automation, the firm said.”

“However, increasing automation will also boost jobs and economic growth, it added.”

“The firm called for action to prevent a damaging increase in income inequality.”

Rise of the robots

“Each new industrial robot wipes out 1.6 manufacturing jobs, the firm said, with the least-skilled regions being more affected.”

“Regions where more people have lower skills, which tend to have weaker economies and higher unemployment rates anyway, are much more vulnerable to the loss of jobs due to robots, Oxford Economics said.”

“Moreover, workers who move out of manufacturing, tend to get new jobs in transport, construction, maintenance, and office and administration work – which in turn are vulnerable to automation, it said.”

“On average, each additional robot installed in those lower-skilled regions could lead to nearly twice as many job losses as those in higher-skilled regions of the same country, exacerbating economic inequality and political polarisation, which is growing already, Oxford Economics said.”

“We’ve seen plenty of predictions that robots are about to put everyone, from factory workers to journalists, out of a job, with white collar work suddenly vulnerable to automation.”

“But this report presents a more nuanced view, stressing that the productivity benefits from automation should boost growth, meaning as many jobs are created as lost.”

“While it sees the robots moving out of the factories and into service industries, it’s still in manufacturing that the report says they will have the most impact.”

“Where service jobs are under threat, they are in industries such as transport or construction rather than the law or journalism and it’s lower-skilled people who may have moved from manufacturing who are vulnerable.”

“The challenge for governments is how to encourage the innovation that the robots promise while making sure they don’t cause new divides in society.”

Oxford Economics found the more repetitive the job, the greater the risk of its being wiped out.”

Jobs which require more compassion, creativity or social intelligence are more likely to continue to be carried out by humans “for decades to come”, it said.

The firm called on policymakers, business leaders, workers, and teachers to think about how to develop workforce skills to adapt to growing automation.

The firm predicted that China will have the most manufacturing automation, with as many as 14 million industrial robots by 2030.

In the UK, several hundreds of thousands of jobs could be replaced, it added.

However, if there was a 30% rise in robot installations worldwide, that would create $5 trillion in additional global GDP, it estimated.

At a global level, jobs will be created at the rate they are destroyed, it said. 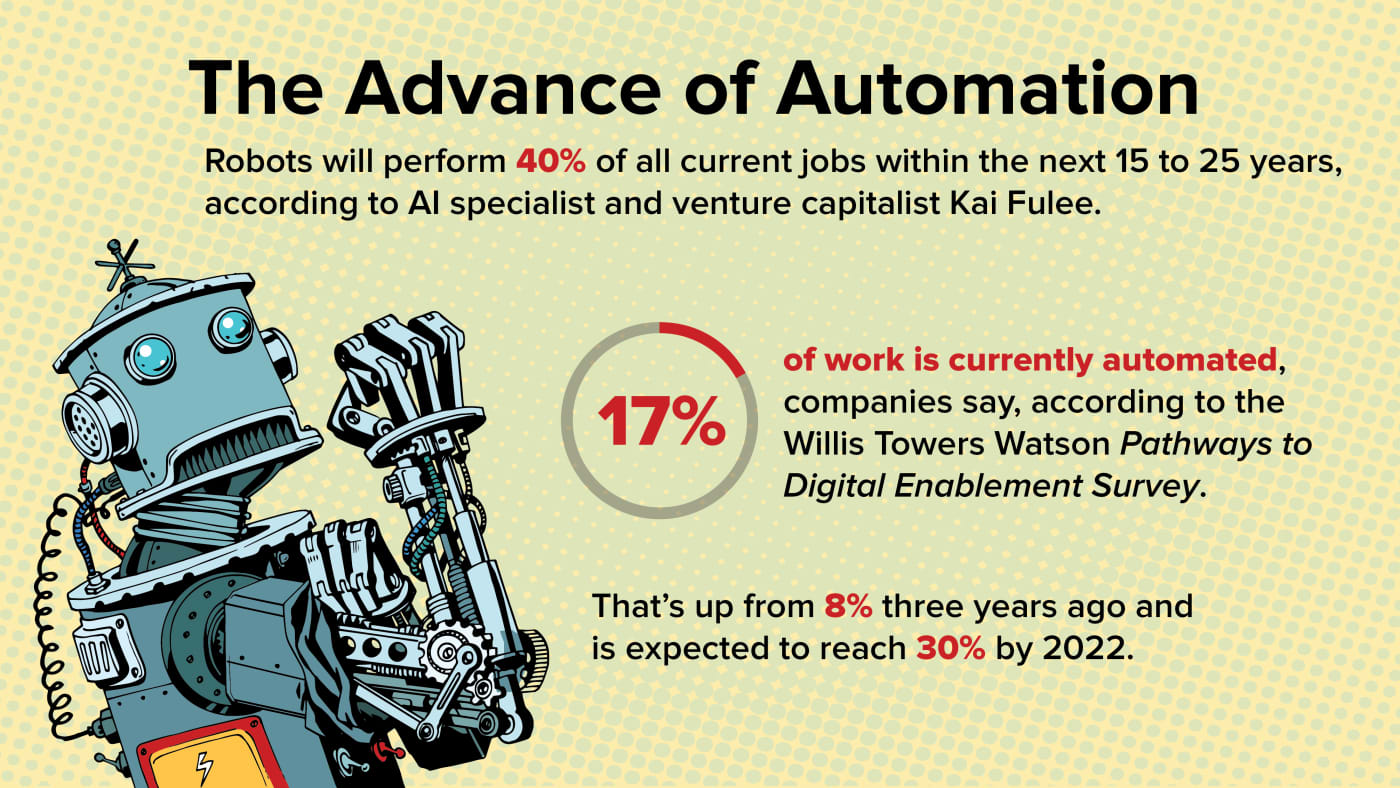 “Where have all the manufacturing jobs gone? If you ask Republican presidential candidate Donald Trump, the answer is China! But there’s another, more plausible explanation. (As per) Hillary Clinton, “It’s the robots, stupid”.

“The U.S. has lost 5 million factory jobs since 2000. Trade has claimed production jobs – in particular when China joined the WTO in 2001. Nevertheless, there was no downturn in U.S. manufacturing output. As a matter of fact, U.S. production has been growing over the last decades. From 2006 to 2013, “manufacturing grew by 17.6%, or at roughly 2.2% per year,” according to a report from Ball State University.”

“The study reports as well that trade accounted for 13% of the lost U.S. factory jobs, but 88% of the jobs were taken by robots and other factors at home.”