The problem with the USA having its leader being severely challenged with regards science and history and who’s surrounded by sycophants, is that this commander-in-chief is doomed to repeat mistakes that we need to know in order to successfully overcome the negative consequences from current similar circumstances. He’s not even able to comprehend whatever competent scientific experts try to share with him. What’s worse, he’s incapable of admitting to any shortcomings that would enable him to compensate for his lack of understanding.

The link to the below article by National Geographic details how those US states which had leaders who took early and longer serious steps to mitigate for those infected by the 1918 Spanish flu epidemic, suffered less loss of lives than those head of states who didn’t act accordingly.

See:  How some cities ‘flattened the curve’ during the 1918 flu epidemic

The (CDC) Center for Disease Control and Prevention shares the following time-line regarding this 1918 pandemic which demonstrates the lesson, “Those who do not learn from history are doomed to repeat it.”

As per a 3/2020 Live Science report, “In 1918, a strain of influenza known as Spanish flu caused a global pandemic, spreading rapidly and killing indiscriminately. Young, old, sick and otherwise-healthy people all became infected, and at least 10% of patients died.”

“Estimates vary on the exact number of deaths caused by the disease, but it is thought to have infected a third of the world’s population and killed at least 50 million people, making it the deadliest pandemic in modern history. Although at the time it gained the nickname “Spanish flu,” it’s unlikely that the virus originated in Spain.” (It has also been known as “La Grippe.”)

“Bristow estimates that the virus infected as much as 25% of the U.S. population, and among members of the U.S. Navy, this number reached up to 40%, possibly due to the conditions of serving at sea. The flu had killed 200,000 Americans by the end of October 1918, and Bristow claims that the pandemic killed over 675,000 Americans in total. The impact on the population was so severe that in 1918, American life expectancy was reduced by 12 years.”

Below is a historical timeline of the “Spanish flu” historical event that took place from 1917 to 1919:

“A draft is established to increase the number of soldiers; Army begins training recruits at 32 large camps, each housing 25,000 to 55,000 soldiers.” 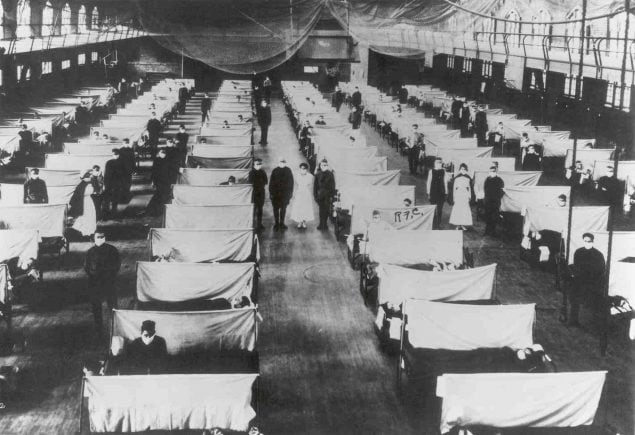 “Outbreaks of flu-like illness are first detected in the United States.”

“More than 100 soldiers at Camp Funston in Fort Riley, Kansas become ill with flu. Within a week the number of flu cases quintuples.”

“Sporadic flu activity spreads unevenly through the United States, Europe, and possibly Asia over the next six months.

“By May, hundreds of thousands of soldiers travel across the Atlantic each month as they are deployed for World War I.” 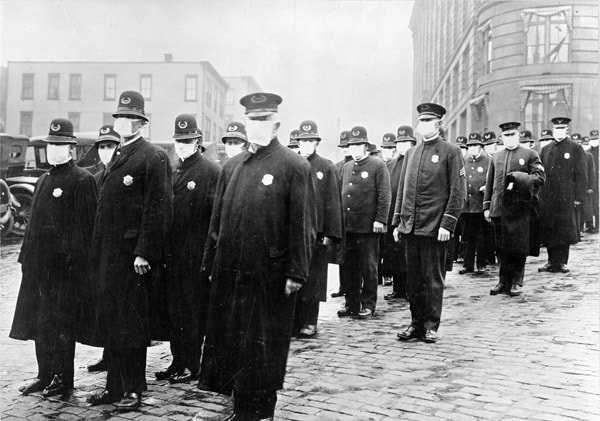 “The second wave of flu emerges at Camp Devens, a United States Army training camp just outside of Boston, and at a naval facility in Boston.”

“Between September and November, a second wave of flu peaks in the United States. This second wave is highly fatal, and responsible for most of the deaths attributed to the pandemic.”

“New York City’s Board of Health adds flu to the list of reportable diseases, and requires all flu cases to be isolated at home or in a city hospital.”

“By the end of September, more than 14,000 flu cases are reported at Camp Devens—equaling about one-quarter of the total camp, resulting in 757 deaths.”

“In fall of 1918 the United States experiences a severe shortages of professional nurses, because of the deployment of large numbers of nurses to military camps in the United States and abroad, and the failure to use trained African American nurses.”

“Philadelphia is hit hard with the pandemic flu viruses—more than 500 corpses await burial, some for more than a week. Cold-storage plants are used as temporary morgues, a manufacturer of trolley cars donates 200 packing crates for use as coffins.”

“Chicago, along with many other cities across the United States, closes theaters, movie houses and night schools and prohibit public gatherings.”

“San Francisco’s Board of Health requires any person serving the public to wear masks and issues strong recommendation to all residents to wear masks in public.”

“New York City reports a 40 percent decline in shipyard productivity due to flu illnesses in the midst of World War I.” 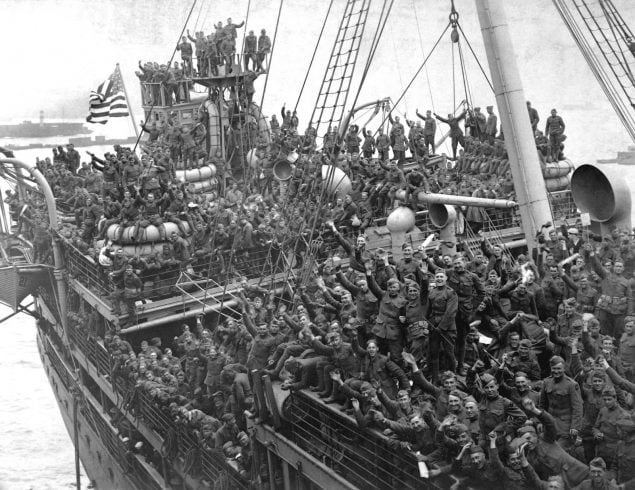 “The end of World War I enables a resurgence of influenza as people celebrate Armistice Day and soldiers begin to demobilize.”

“Salt Lake City officials place quarantine signs on front and rear doors of 2,000 homes where occupants have been struck with flu.”

“Committee of the American Public Health Association encourages stores and factories to stagger opening and closing hours and for people to walk to work when possible instead of using public transport to prevent overcrowding.” 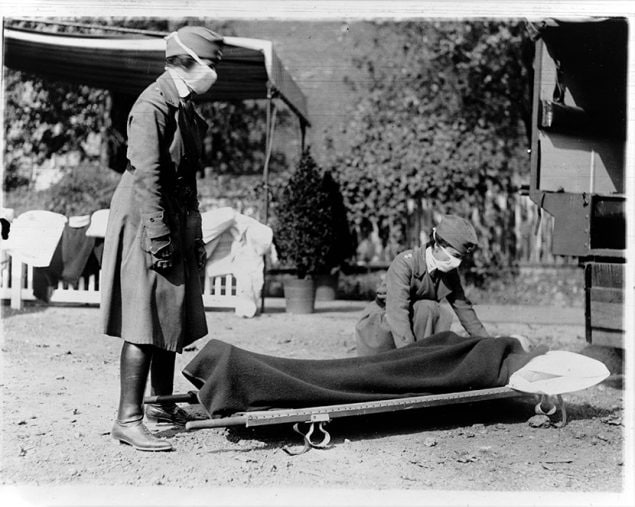 A third wave of influenza occurs in the winter and spring of 1919, killing many more. Third wave subsides in the summer.

In San Francisco, 1,800 flu cases and 101 deaths are reported in first five days of January.

Many San Antonio citizens begin complaining that new flu cases aren’t being reported, and that this is fueling another influenza surge.

Seven-hundred and six cases of influenza and 67 deaths are reported in New York City, triggering fear of a recurrence of severe flu activity.

Trustees of the Boston City Hospital ask mayor for a special appropriation of $3,000 to study the treatment of influenza.”

Influenza appears to be nearly eradicated in New Orleans as number of reported cases drops.

Illinois passes a bill to create a one-year course to become a “practical nurse,” an effort to address the nursing shortage the pandemic had exposed.

At Versailles Peace Conference, while negotiating the end of World War I with other world leaders, U.S. President Woodrow Wilson collapses. Some historians speculate he was weak from influenza, which was still rampant in Paris.