1/6 Insurrection Of Capitol Complex Was In Planning Stage By WH At Latest, Mid Nov 2020

Make no mistake. What happened during the 1/6/2021 Capitol riots had been in the planning since before mid-November 2020. It’s a miracle that this domestic terrorist coup operation hadn’t been better executed.

There are numerous clues that support my assertions. Let’s connect the dots…

Clue 1.) The former retired Lt General Mike Flynn’s younger brother Charles Flynn had originally denied being at a key Pentagon meeting on 1/6/2021 when calls came in from the local officials under siege at the Capitol complex requesting help from military which ended up being slow to respond. Days later the Army admitted to his presence in the room.

As per Army Times: “The familial ties drew scrutiny last week when the Army falsely denied that Charles Flynn was present during a phone call between the Pentagon and D.C. officials as the Jan. 6 Capitol riot unfolded, according to the Washington Post. The Army ultimately confirmed to the Post that Flynn participated in the phone call, during which the Capitol Police pleaded for National Guard troops to assist in securing Capitol grounds.”

As per Wikipedia: During the 2021 storming of the United States Capitol, (Acting Secretary of Defense Christopher) Miller was criticized for several reasons. He hesitated to approve assistance of National Guard troops from neighboring states to reinforce the D.C. National Guard until 4:41 PM, three hours after Capitol Police signaled that they were being overrun and two hours after city officials from the District had asked for such assistance. Two days prior, he banned the DC National Guard from touching, arresting, or searching rioters, and bringing weapons, helmets and body armor to work on January 6. Miller was succeeded by then-Deputy Secretary of Defense David Norquist on January 20, 2021. 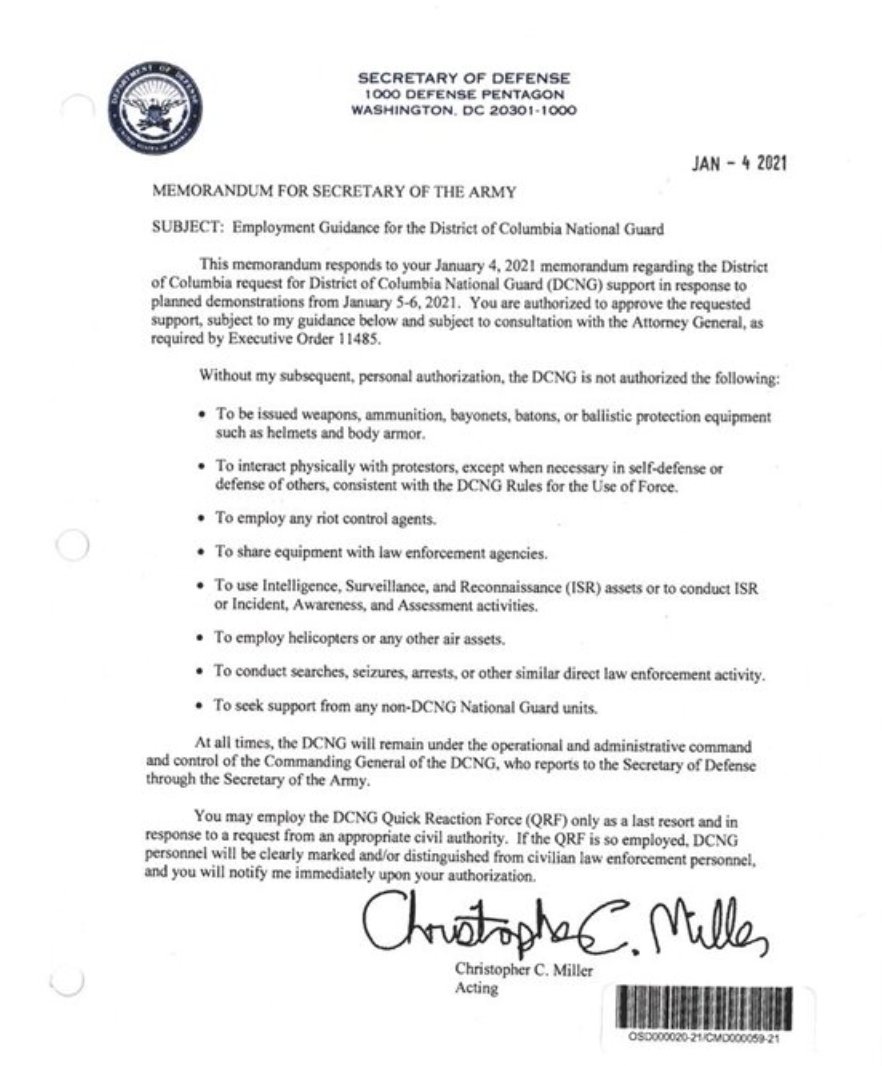 My question: Were Christopher Miller, the Acting Defense Secretary appointed by President Trump in mid-November 2020 and Mike Flynn’s brother Charles at the same Pentagon meeting on 1/6/2021, when the Pentagon was fielding calls from officials, hunkered down in Capitol complex, who were calling begging for help? If this were to be the case, there’s no innocent explanation for this circumstance? It’d explain why the Army had denied presence of Lt. General Charles Flynn for days after 1/6/21.

Clue 2.) Three of the key advisers who helped  Donald Trump’s‘ win the US presidency in 2016,  even after they fell from grace under the weight of federal criminal charges, managed to resurface during Trump’s final days in the White House to him help plan the “Stop the Steal” event that ended up being the catalyst for the 1/6 Capitol riots. They’re the old familiar names of Roger Stone, Steve Bannon, and retired Lt. Gen. Michael Flynn. They all earned pardons a la Trump.

Both Mr. Ellis and Mr. Miller are no longer working for the US government. So what was the purpose of these Trump appointees” short term assignments from mid November 2020 until post the 1/20/2021 inauguration of POTUS Biden?

In support of clue 1 regarding the involvement of Charles Flynn…

“Charles Flynn has faced scrutiny in recent days over the sluggish deployment of National Guard troops to the U.S. Capitol as insurrectionists broke into the building on Jan. 6.”

“Officials with D.C.’s city government and the Capitol Police have alleged that the Pentagon was slow in responding to a request for assistance from the National Guard in quelling the riot.”

“The Army has acknowledged that Charles Flynn was in the room for a key call from the local officials making that request, but the service did so only after it had “falsely denied for days” he did not attend, according to The Washington Post.”

“Flynn is a graduate of the U.S. Naval War College, where he earned a master’s degree in national security and strategic studies, according to his official bio.”

“He has command experience from a platoon to a division and served in both Iraq and Afghanistan.”

“In recent years, he commanded the 25th Infantry Division in Hawaii, after which he became deputy command general of U.S. Army Pacific Command.”

“Flynn, who will be promoted to a four-star general if confirmed by the Senate, is stationed in Washington, D.C., and serves as deputy chief of staff in the Army’s G-3/5/7 section. It plans and coordinates mobilization of the Reserve component in the continental United States.”

Here’s data regarding clue 2, the re-entry of Steve Bannon, Mike Flynn and Roger Stone onto the White House stage around November 2020…

As per 1/15/2021 ABC News report, “Longtime Trump advisers connected to groups behind rally that led to Capitol attack”  by Will Steakin, Matthew Mosk, James Gordon Meek and Ali Dukakis:

“Roger Stone, Steve Bannon, and retired Lt. Gen. Michael Flynn all participated in efforts to promote the Jan. 6 “Stop the Steal” event that ultimately devolved into a riotous and deadly melee at the United States Capitol, leaving five dead and causing Trump to become the only president to be impeached for a second time.”

“Bannon played a significant role in promoting the Jan. 6 rally, which was co-organized by “March for Trump,” and he previously served as a prominent sponsor of the group’s cross-country December bus tour ahead of the rally. Shortly after Trump lost the 2020 election, Bannon’s “War Room” podcast was banned from Twitter for suggesting Dr. Anthony Fauci and FBI Director Christopher Wray should be beheaded.”

“I’d put the heads on pikes. Right. I’d put them at the two corners of the White House as a warning to federal bureaucrats,” Bannon said. “You either get with the program or you are gone.”

“(Roger) Stone whipped up a crowd of Trump supporters in Washington the night before, telling them the president’s enemies sought “nothing less than the heist of the 2020 election.”

“Flynn promoted the so-called “Jericho March,” a rally of Christians to “pray, march, fast, and rally for election integrity,” according to the group’s website, that also took place on Jan. 6 in the shadow of the Capitol. In the weeks leading up to the event, Flynn told his supporters that they would “need to be fearless as Americans.”

“Speaking at a Dec. 12 rally in Washington to promote the Trump effort to overturn the election, Flynn told supporters they had reached a “crucible moment” and “there has to be sacrifice.”

“We’re in a battle … for the heart and soul of the country,” Flynn said. “We will win.”

The long-time connections among Mike Flynn, Rep Devin Nunes, Michael Ellis, Ezra Cohen Watnick and Kash Patel, made the move of the last 2 players into key roles at the Defense Department, ordered by President Trump around mid November 2020, suspect. The Trump appointee as of 1/9/2021, acting defense secretary Christopher C. Miller was the one who then ordered the director of the National Security Agency to install a former GOP political operative, Michael Ellis as the NSA’s top lawyer. 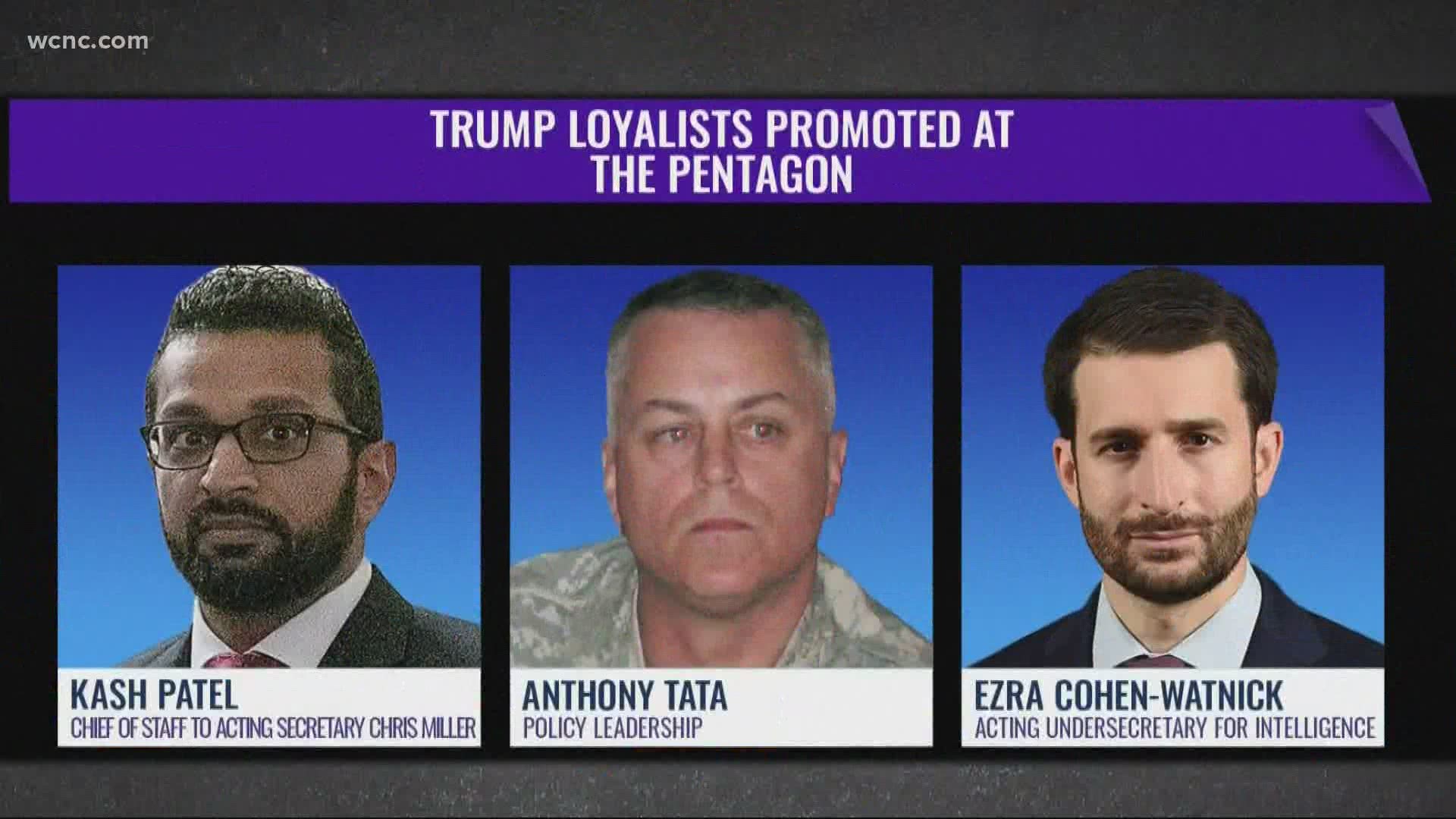 Also today, Ms. Stewart submitted her resignation from the position of Chief of Staff, effective today.  Mr. Kash Patel, currently on the National Security Council staff, has been named by Acting Secretary Miller as his Chief of Staff.

Acting Secretary of Defense Miller issued the following statement on these personnel changes:  “I want to thank Dr. Anderson, Admiral Kernan and Jen Stewart for their service to the nation.  Over their careers each has contributed greatly to the national defense and the future of the Department of Defense. We wish them the best in their next endeavors.

As per 11/10/2020 CNBC report, “Trump loyalists elevated to powerful roles at the Pentagon after firing of Defense Secretary Esper” by Amanda Macias:

“The Pentagon on Tuesday elevated 3 Trump loyalists to powerful positions a day after the sudden termination of Secretary of Defense Mark Esper and following the resignations of multiple senior officials in the Defense Department.”

“In a lengthy statement released 11/10/2020, the Pentagon said that Anthony Tata, Ezra Cohen-Watnick and Kash Patel had been promoted to key roles.”

“Tata is now working as the senior official performing the duties of the undersecretary of Defense for policy, following James Anderson’s resignation.”

“Tata, a retired Army general who became a pro-Trump pundit on Fox News, joined the Defense Department earlier this year. Trump had nominated him to a role that required Senate confirmation, but lawmakers opposed Tata in the role, and the president instead named him to an acting role that didn’t require confirmation. Tata has a history of Islamophobic comments and has called President Barack Obama a “terrorist leader.”

“Cohen-Watnick is set to take over as the new acting undersecretary of Defense for intelligence and security, after Joseph Kernen resigned.”

“After being pushed out of the White House in 2017, following his tenure working for former national security advisor Michael Flynn, Cohen-Watnick rejoined the Trump administration earlier this year in a Pentagon role. Flynn was fired from his role and eventually pleaded guilty to lying to the FBI. Cohen-Watnick also worked for former Attorney General Jeff Sessions before Sessions was fired in 2018.”

‘Replacing Jen Stewart, the chief of staff to the Defense secretary, is Kash Patel, a member of the National Security Council. Patel was a staffer for Rep. Devin Nunes, R-Calif., who worked to discredit the probe into Russian interference in the 2016 election and potential links between the Trump campaign and the Kremlin.

“Citing unnamed U.S. officials, the Times identified the White House officials as Ezra Cohen-Watnick, the senior director for intelligence at the National Security Council, and Michael Ellis, a lawyer who works on national security issues at the White House Counsel’s office.”

“The New York Times reported that Cohen-Watnick began reviewing “highly classified reports” about intercepted communications of foreign officials after Trump said on Twitter earlier this month that he was “wiretapped” by his predecessor, President Barack Obama.

The reports reviewed by Cohen-Watnick consisted of mostly of ambassadors and other foreign officials talking about how to develop contacts with the Trump family and his inner circle ahead of inauguration.”

FBI Director James Comey told Congress he had seen no evidence to support the wiretapping claim.

As per 11/13/2021 Lawfare report,  How Did a Trump Loyalist Come to Be Named NSA General Counsel—And What Should Biden Do About It?, by Susan Hennessey

“Earlier this week, the Washington Post broke the story that Michael Ellis—a former staffer for Rep. Devin Nunes and current National Security Council (NSC) official—has been selected as general counsel of the National Security Agency. This set off alarm bells those familiar with the agency, in part because it comes in the same week in which Trump summarily fired the top civilian leadership of the Department of Defense and installed loyalists and cronies in their places.”

“The circumstances of Ellis’s selection, however, point to something different—and in some respects worse—than the developments at the Pentagon. The firings at the Defense Department involve political appointees, nearly all of whom will be gone as of Jan. 20. By contrast, selecting Ellis as NSA general counsel appears to be an attempt to improperly politicize an important career position. Relatedly, it appears to be an effort to “burrow,” or improperly convert a political appointee into a career position. ”

“While important details remain unclear, media accounts include numerous indications of irregularity in the process by which Ellis was selected for the job, including interference by the White House. At a minimum, the evidence of possible violations of civil service rules demand immediate investigation by Congress and the inspectors general of the Department of Defense and the NSA.”