The GOP MAGA Governor Ron DeSantis has shown a willingness to support tougher home building codes designed to withstand future high wind hurricanes. This should be a minimum goal when considering the task of rebuilding to replace homes already damaged by Hurricane Ian in September 2022. But he’s contending with developers and contractors who argue that new tougher building codes would increase the cost of construction, making the owning and maintenance of a home even more unaffordable than it currently is, in an exploding market.

Then there’s the problem of rising home insurance costs. These costs could be lowered if homes were built to withstand the natural events that are inevitable in Florida. This is a tax (invisible but real) on all homeowners. Right now there are homeowner insurance companies fleeing Florida or dropping/ cancelling 160,000 homeowner policies like UPC Insurance. When consumers replace these policies, the increased cost often exceeds 100%.

Let’s not forget the story of widespread power outages, for days in too many cases, that Floridians suffered as a result from Hurricane Ian. My question, is why newer developments aren’t required to provide for underground utility lines? What’s being done to prevent these outages with Florida’s utility companies which is another (invisible) tax?

Let’s not forget the loss of life, exceeding 115 individuals because of Hurricane Ian. Here, folks paid the ultimate price.

There’s a perfect example of a town in Florida, Babcock Ranch which was at the epi center of Hurricane Ian in September 2022, where every structure within this development withstood hurricane level 4 winds with only the most minimal of property damage and with no power outages that were widespread in south Florida. This solar powered town is proof positive what’s possible to do to rebuild back better in Florida.

As per a 11/3/2022 UPI report, Solar-powered Fla. town survived Hurricane Ian — with lights on, by Thomas Leffler:

“The fury of Hurricane Ian left southwestern Florida in tatters after its landfall as a Category 4 storm in September. Particularly hard-hit were the cities of Fort Myers, Fort Myers Beach and nearby Punta Gorda.”

“Along with significant structural damage, power was cut off to a vast number of residents, leaving them with limited access to Internet and without other comforts of home.”

“About 25 miles northeast of Fort Myers lies the community of Babcock Ranch, the first town in the United States to run solely on solar power. While people in surrounding areas were struggling without electricity, it was a much different story for residents who live in the 2,000 homes throughout Babcock Ranch.” “Babcock Ranch’s success lies in its 870-acre solar energy center, home to 680,000 solar panels that ensure clean and renewable energy. The amount of energy generated from the solar farm exceeds the total amount of the town’s consumption, with even more room to grow. The solar farm was hardly damaged by Ian.”

“During the day, while the solar panels are working, we are generating enough power to basically serve about 30,000 homes,” Languell said, noting that future building plans call for the town to expand the population from 2,000 homes to 19,500.”

“Babcock Ranch also houses the largest solar-plus-storage system in the US, containing 10 large gray steel battery storage units that ensure a steady power supply on cloudy days, as well as at night.”

“Babcock Ranch works in partnership with Florida Power and Light, and its amenities besides the solar farm include power and Internet lines that run underground, minimizing damage from the winds and flying debris that ran amok in other Florida cities during Ian.”

“The town was built 30 feet above sea level in order to prevent flooding and withstand the worst storm surges. Each home was built to meet the latest and strongest building codes in Florida.”

“We definitely use a lot of native vegetation, which is why our vegetation really survives … literally a week after the storm, you would never think that we had a storm come through,” Languell said.”

“National outlets have recognized Babcock Ranch’s innovation, such as the prestigious Edison Awards that honor the world’s top innovators. The town received an award as a “Game Changer” in the Edison Awards sustainability category in 2021.” 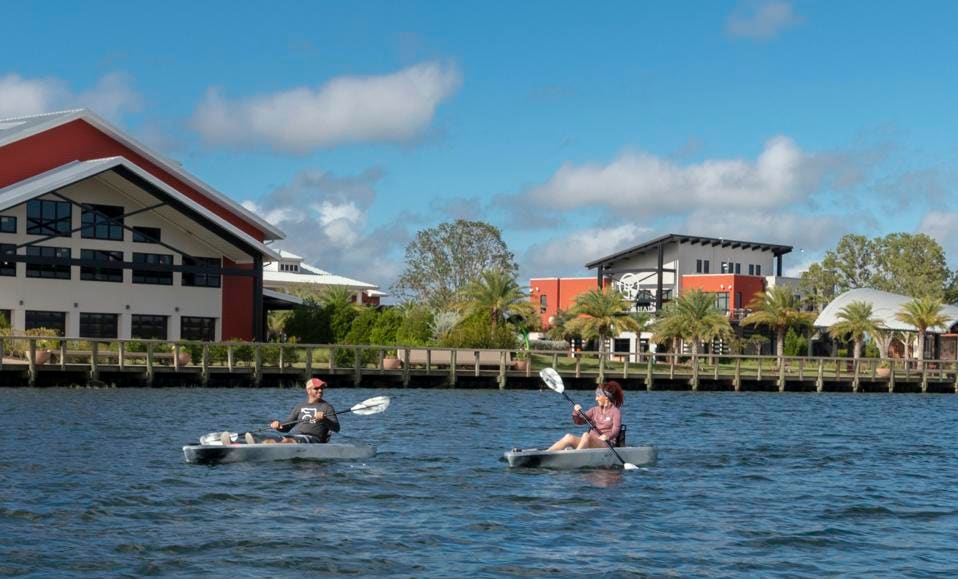 “This vision came to fruition in 2006, when (Syd) Kitson sold 73,000 of the 91,000 acres he owned to Lee County and Florida. This created Babcock Ranch Preserve and resulted in the biggest land preservation deal in the state. Next to it, he set upon creating Babcock Ranch. Kitson & Partners built this environmentally-friendly town on formerly impacted pasture, farm and rock-mined land and committed to keeping a majority of it green, with the first homes coming to market over a decade after its vision.”

“At the end, 90% of the original ranch is in preservation forever and that’s probably what we are most proud of. With the remaining land, we wanted to create the most sustainable, new town that’s ever been created,” Kitson said proudly, whose company Kitson & Partners partnered with the Florida Government and Florida Power & Light (FPL) to make this ecocentric town a reality.” 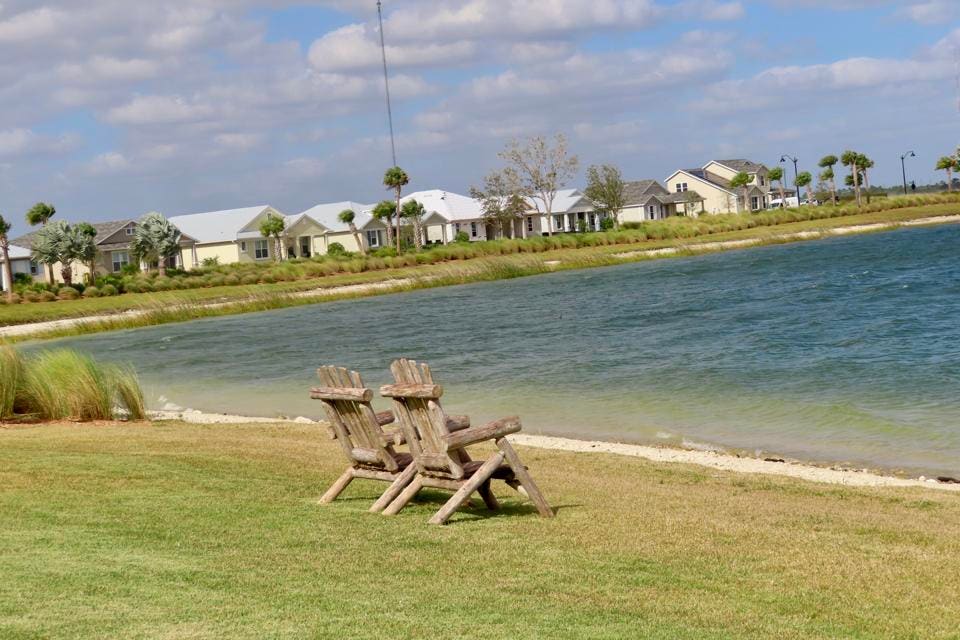 “In a world still clamoring for coal and drilling for oil, the power of the sun seems to have gone by the wayside. Yet, a small town in southern Florida is keeping its lights on with renewable energy, showing how a community can successfully live sustainably. Babcock Ranch, America’s first and only solar town, is an inspiring one-of-a-kind community.”

“Syd Kitson, former professional football player for the Green Bay Packers and Dallas Cowboys and Chairman and CEO of Kitson & Partners, had a dream of creating a simple town of his childhood, but one that’s run renewably. In this utopia, buildings and houses are powered by emissions-free energy, electric cars whiz by on two-lane roads, children ride their bikes to school, native plants adorn the landscapes and residents can be seen enjoying outdoor events with family and friends.”

“Everything at Babcock is built with a focus on preserving and appreciating the environment. Houses are energy efficient and built with sustainable materials; homes need to achieve a Bronze or higher standard of certification from the Florida Green Building Coalition. They are surrounded by beautiful lake vistas and 80% of the landscaping consists of low impact native trees and shrubs. Irrigation is done with water reclaimed from the onsite water and wastewater utility. Neighborhood community gardens provide produce to residents and restaurants.” 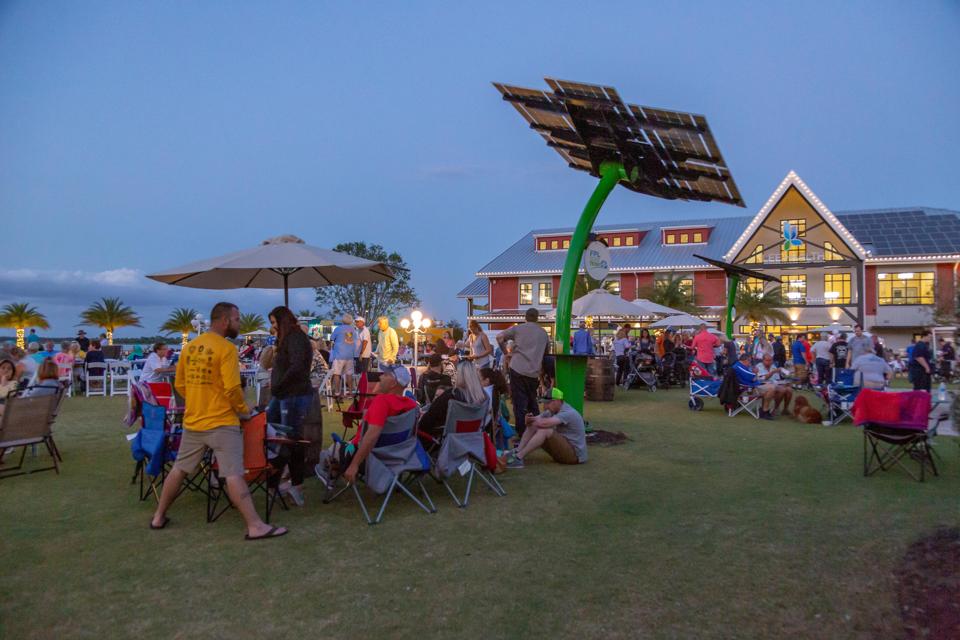 “The town is powered by an 880-acre solar field at the Babcock Ranch Solar Energy Center run by FPL on land donated by Babcock Ranch, the largest solar and storage system in the country. Energy is harnessed from approximately 700,000 panels, processed and fed into the grid from the FPL substation. The power first reaches the town and the remaining returns to the grid to serve other customers. When the sun sets, the stored energy provides uninterrupted power.”

“Additionally, energy generated from rooftop photovoltaics and solar trees in neighborhood parks add additional power. Those living in the town can choose to have panels on their roof or simply get it from the solar center.”