Note: As per AZ Central, “Kari Lake (GOP MAGA candidate) is the last election denier standing in swing state governor’s races.” Let’s pray that the admirers of the former Republican Party US Senator John McCain from Arizona prevail in her defeat. The voters answered the Democrat’s POTUS Joe Biden’s clarion call, warning Americans that our US democracy was at risk.

During this 2022 election cycle, the majority of Arizonians channeling the memory their iconic GOP US Senator John McCain for over 2 decades, managed to resist being pulled into the world of Trumpism. Overall, they’ve rejected its standard practices of the usage of intimidation and violence along with the chaos associated with the dissemination of misinformation, conspiracy theories, when they voted to defeat almost all the GOP MAGA candidates in Arizona who’ve continued to echo the defeated ex-president’s “big lie,” claiming that he’s been cheated out of his presidential win in 2020, by a corrupt US election infrastructure.

This entire era of Trumpism would have had the GOP conservative US Senator John McCain of Arizona turning over in his grave as he was the ultimate champion and defender on behalf of our US democracy. He was definitely not a lover of autocracies like Russia and China. And most importantly he was the proverbial thorn on the defeated ex-president’s behind. 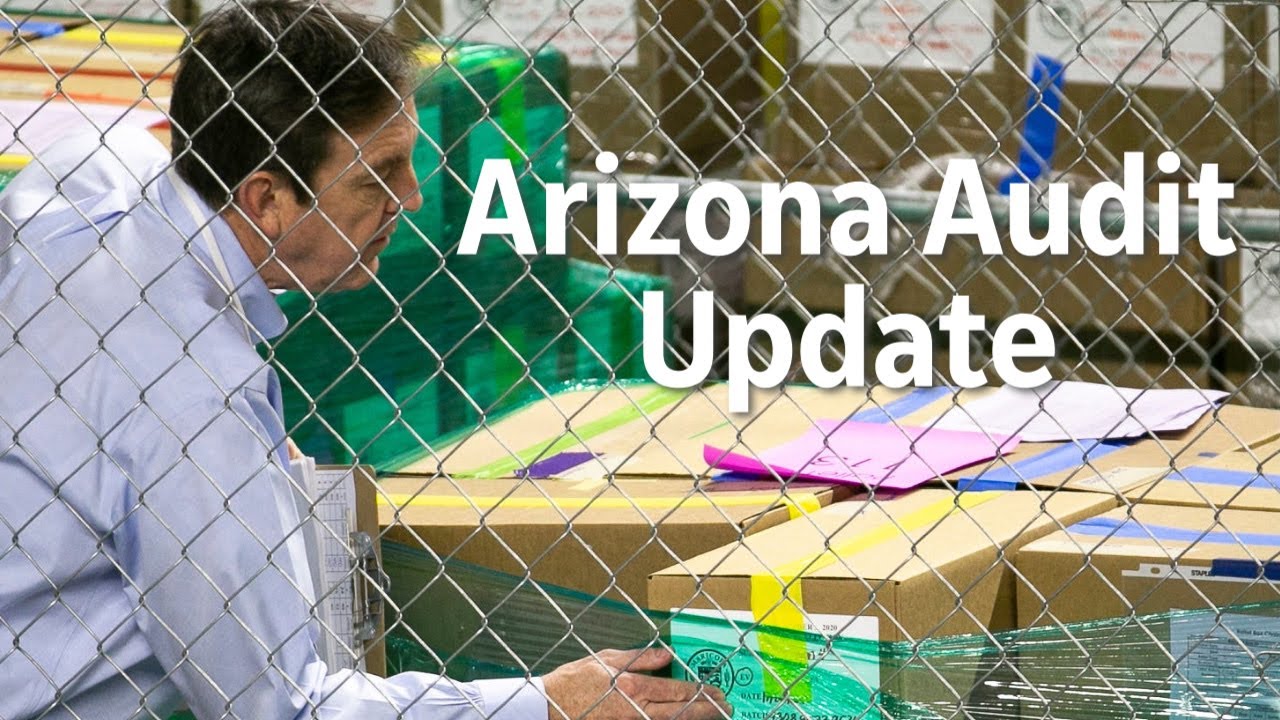 Remember in 2021, when Arizona State Senate Republicans were determined to prove that the 2020 election victory was stolen from the defeated ex-president. They took possession of (2020) ballots, voting machines, and hard drives, and then they handed all of this collected paraphernalia over to some Florida business, the “Cyber Ninjas,” with no election experience. The “Cyber Ninjas” was operated by a conspiracy theorist who claimed that the official 2020 presidential election results were illegitimate. This audit lasted for months, painting Arizona as the poster state, for GOP MAGAs skullduggery, the land of endless recounts with a plethora of court battles, death threats, as well as demands for the arrest of elected leaders in Maricopa County, which includes the city of Phoenix,” The New York Times reports.

This audit covered two-thirds of the 2020 votes cast in Arizona and it had no chance of altering the 2020 election outcome. It was simply an exercise to placate the GOP MAGA angry voters who were out to provide evidence that the defeated ex-president had the 2020 election stolen from him. Of course, the audit was a bust for the GOP MAGA zealots.

It exemplifies how compromised is the once-inviolable democratic norm where losers and winners alike were expected to honor the results of elections, the Times says. While this sham audit failed to substantiate the defeated ex-president’s “big lie,” it did lay the groundwork for the overturning of future elections. But Arizonians are giving them the proverbial finger.

As per the 11/13/2022 LA Times report, “In Arizona, election officials fight off torrent of conspiracy theories as vote count continues” by Arit John:

“Election workers continue to tabulate ballots in several counties, including Maricopa, the state’s most populous and vote-rich. Officials have asked for patience, stressing in daily news conferences that the process is unfolding at a normal pace.”

“But that hasn’t stopped a barrage of increasingly cynical conspiracy theories from some “Republicans, including former President Trump, who has endorsed and campaigned with Lake.”

“For days, the former president has railed against Arizona elections after outlets projected (on 11/11/2022) that Trump-backed Senate candidate Blake Masters lost to incumbent Sen. Mark Kelly.”

“On (11/11/2022), Masters said he would not concede until “every legal vote is counted.” That same day, Fox News host Tucker Carlson asked Lake what she thought of social media posts that suggest her opponent didn’t campaign aggressively because she planned to cheat.”

“Lake said she understood the reasoning behind the online discussions and leveled criticism of election administration under Hobbs, who is Arizona’s secretary of state.”

“Election officials in Arizona, particularly in Maricopa County, have been working overtime to combat criticism, misinformation and insinuations of malfeasance as they work through hundreds of thousands of mailed ballots returned on election day.” 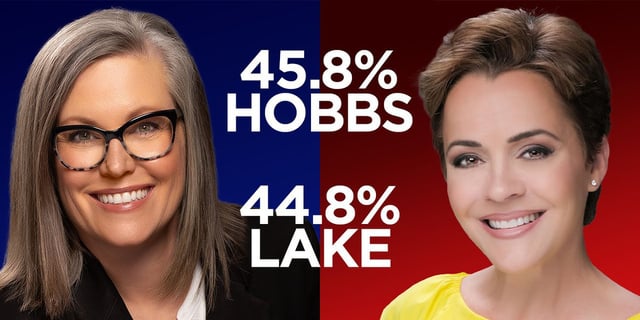 “Much of the vitriol has come from Lake, her campaign and her allies, who in addition to Trump include conservative pundits such as Carlson, Charlie Kirk and former Trump advisor Stephen K. Bannon, who appeared with her at a rally last week. Her supporters have used social media and appearances on conservative media outlets to belittle election officials and accuse them of “slow rolling” the results.”

“By Friday night (11/11/2022), in addition to Kelly’s reelection victory over Masters, another key race in Arizona for secretary of state was won by a Democrat, according to the Associated Press. Adrian Fontes defeated Mark Finchem, a member of the far-right group the Oath Keepers, who was at the U.S. Capitol on Jan. 6, 2021.”

“The defeats of Finchem and Masters, who has said Trump would be in the White House today if the 2020 election had been “free and fair,” have raised the stakes in the governor’s race. Lake was seen as the most popular of the Trump-endorsed candidates and has been the subject of speculation as a possible contender for Trump’s 2024 running mate.”

“Bill Gates, the GOP chairman of the Maricopa County Board of Supervisors, has countered criticism of the length of time it has taken to count ballots and strongly rejected the idea that officials were purposely delaying the results, noting that the county’s election workers have been working 14 to 18 hours a day.”

“The county uses a “first in, first out” approach, he said, which is why early ballots received on the last day of voting have not been counted yet.”

“Election officials, particularly in Maricopa County, have been under increased scrutiny and threats since the 2020 election. After the 2020 race was called for Joe Biden, hundreds of Trump supporters, some armed, protested outside the county election office. Election day mishaps that might previously have gone unnoticed are now fuel for rampant speculation of fraud.”

“That was the case with a Maricopa County printer issue that prevented an estimated 17,000 election day voters from running their ballots through counting machines at 30% of county vote centers. The issue was eventually fixed and voters were given the option to place their ballots in a secure drawer, known as box 3.”

“Officials have discussed the issue in several news conferences and said no voters were disenfranchised.”

“Idiot, and possibly corrupt, officials have lost control of the tainted Election in Arizona,” Trump wrote on Truth Social Friday. “A NEW ELECTION MUST BE CALLED FOR IMMEDIATELY!”

“Several Republicans have cast the printer issues as further evidence against using voting machinery, which were the subject of intense scrutiny in 2020 after Trump lawyer Sidney Powell falsely claimed Dominion Voting Systems machines were used to change Trump votes to support Biden.”

“In the days after the election, critics focused on the pace of the ballot counting, accusing officials of playing politics to delay an announcement of a Lake victory, or selectively withholding batches of ballots that favor Republicans.”

“For decades, Arizona voters have been able to request absentee, or early, ballots without providing a reason when doing so. The option has proved popular and, as a result, it has taken an average of 10 to 12 days to verify, process and count those ballots.”

“Arizona has taken some steps to speed up the process before election day. Election workers are allowed to start processing and verifying signatures on early ballots a few weeks before the election. The state also requires early ballots to be received by the time polls close at 7 p.m. on election day.”

“There is a reason why the state’s process is slower than others, said Gerry Langeler, the director of research and communications at the National Vote at Home Institute.”

“Arizona’s ballot-counting timeline wasn’t heavily scrutinized in past cycles, when media outlets were able to quickly call races for Republicans after decisive victories. But the once-reliable GOP stronghold has become more purple, leading to some of the most competitive races in the election cycle.”